“For there is an aspect of cruelty in eating, nourishing one life at the expense of another. It is an aspect usually avoided – the crudeness of a slab of blood-red meat is disguised by cooking it, camouflaging it with sauces and garnishes.”

It was the most extraordinary banquet. Like nothing I’d ever seen or tasted before.
The menu: Stomach, Egg, Flesh, Bone, Skin, Blood, Heart, Milk, Fruit, Virgins’ Breasts, Dead Men’s Bones. 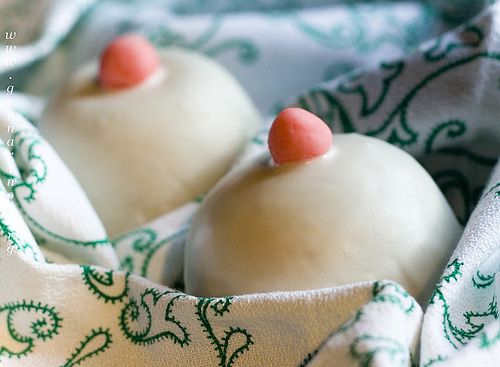 As Spartan as it sounds, the food was extraordinary: perfumed with exotic spices, exquisitely garnished and surreal.
The banquet was the climax for the Seventh Symposium of Australian Gastronomy in 1993, the theme of which was Nature and Culture. Its creators, Sydney chefs Gay Bilson and Janni Kyritsis from Berowra Waters, described it as a homage to the body and to meat (though Bilson’s desire to serve sausage made of her own blood didn’t see the light of day).
Held in a long narrow room at the National Gallery in Canberra during an exhibition of Surrealist paintings subtitled Revolution by Night, I remember going downstairs after viewing the paintings and turning the corner at the bottom of the stairwell. There, under harsh surgical lights was a table, almost the length of an Olympic swimming pool, spread with a tablecloth of raw, scrubbed tripe, the pieces laboriously sewn together by Kyritsis with sausage casing. 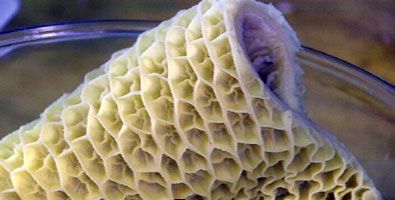 A piece of Tripe

I could hear the guests who had entered the room a little before me muttering and exclaiming. A few were laughing out loud.
“Oh my god, I feel sick,” said one.
Another pushed back against the crowd and fled back up the stairs.
If the original intention of the Surrealists was to shock, then this table setting had catapulted most of us out of our complacency. 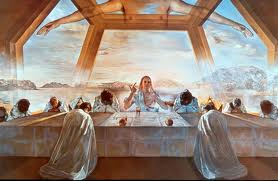 Was this a reference to Salvador Dali’s controversial Sacrament of the Last Supper or perhaps a to Luis Bunuel’s 1962 film The Exterminating Angel?
I hoped not because in that film the guests are psychologically trapped in the music room after dinner and resort to slaughtering several stray sheep and roasting them on fires made from floorboards and broken furniture.
I was relieved that the long narrow room we were in was made of solid concrete. 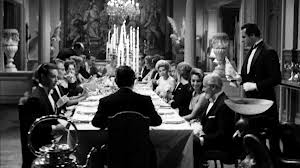 Suddenly a host of bare-chest waiters appeared with diagonal bandages across their hearts (the walking wounded?), rolled up the tablecloth and whisked it away. It was swiftly replaced with a conventional setting of cutlery with the knife-fork-spoon laid on a microscope slide accompanied by a carafe of water. We all took our seats.
The banquet had begun. Curiously, it started with rather conventional dishes.
First to arrive was a nest of raw beef made with strips of meat, not the more conventional beef mince. These were wound around a pullet’s egg yolk, garnished with capers, anchovy fillets and raw onion and served with jugs of olive oil and thin crisp wafers of bread.
Only red wine was served throughout, in keeping with the theme. 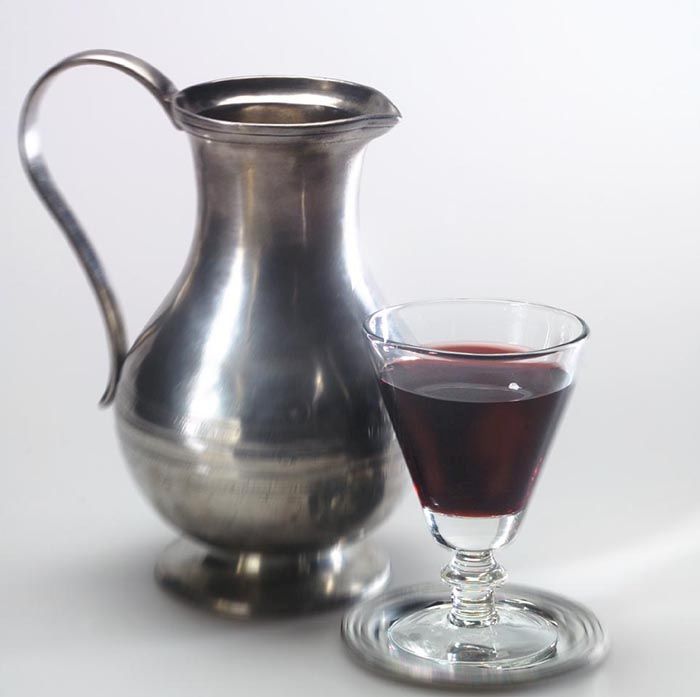 A carafe of red wine

This was followed by an intensely flavourful beef consomme accompanied by marrow bones. They were presented in a separate oval dish, garnished with edible gold leaf. I love soft jellied marrow and scooped mine out with a small silver spoon and spread it on the accompanying slices of toasted brioche while the woman sitting next to me looked on with disapproval.
The “skin” dish arrived next, two pieces of crispy fish skin, one freshwater (spotty brook trout), the other from the ocean (King George Whiting). They were garnished with a cucumber and seaweed salad.
So far we had eaten flesh, bones, marrow, skin. As Santich points out, the spectre of mortality lay over this banquet.
Next appeared blood in the form of two black puddings (or sausages) garnished with wedges of pan-fried apple. The red wine changed to sparkling burgundy for this course. Perhaps as Barbara Santich points out, the bubbles were meant to represent the oxygen-carrying role of the blood in the body.
This was followed by rare-roasted pigeon breast set on a bed of caramelised red cabbage. The breasts were garnished with skewered duck and pigeon hearts, resembling nipples.
A runny, ripe Torta del Casar was then presented, a delicious Spanish cheese along with goats cheese in puff pastry. 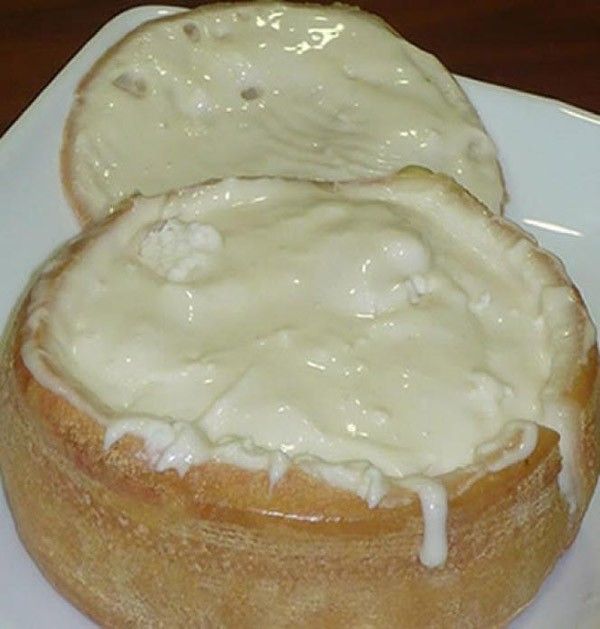 Just as I had finally relaxed, the bare-chested waiters re-appeared carrying strips of white sheet. They tied these around our eyes while we waited for the grande finale.
I sipped on my bubbles as I waited for them to be tied over the eyes of all the 80 guests and wondered what could possibly come next. In the background I could hear a flurry of activity amongst the waiters.
My mind was filled with images of the paintings I had seen upstairs, of Barry Humphries’ Dada art of squashed lamingtons and slices of jam roll, and Dali’s lobster telephone and his melting time pieces. I hoped I wouldn’t have night terrors. 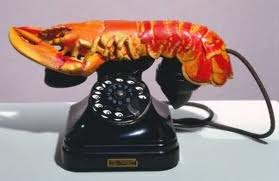 I mused on something Salvador Dali had said: that Australia was the most surreal country in the world. Given that surrealism concerns itself with paradox, or juxtaposing the unexpected with the conventional (as in Marinetti’s Futurist Cookbook in which he recommends using eau de cologne as a flavouring ingredient), I wondered if he were referring to the strangeness of the landscape and its bewilderingly different flora and fauna, or to the fact that we live in the opposite hemisphere to Europe, with contrary seasons and disorienting stars.
To European eyes, it must seem an upside down world, so different in mood, so separate, so strange.
Perhaps only here, downstairs in the bowels of the National Gallery of Australia, could a banquet like this be staged.
A banquet so surreal, confronting us with our carnivorousness – and if Bilson had used her own blood to make the sausages, with our cannibalism.
When our blindfolds were finally removed, my eyes beheld a table strewn with grapes and figs and focaccia studded with fruit and nuts.
In the centre of the long table was a high mound of grapes. 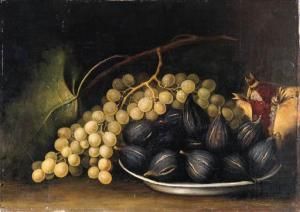 The rooms was filled with gasps.
Slowly, from under the mound, arose a slight young woman who was then borne away by the waiters.
As Santich points out, the element of surprise was all-important because it signified a turning point in the meal as we moved to fruit and cereals, the domain of Demeter, goddess of fertility and mellow fruitfulness.
“It is Demeter’s daughter and alter ego, Persephone, who, after an enforced sojourn in Hades, returns annually to earth for sowing and harvest. We, too were condemned to darkness before the re-awakening.”
I could hardly believe my eyes. What was going on here? A corpse coming to life?
With coffee came minni di virgine (virgin’s breasts), moulded Sicilian almond cakes with glazed nipples and ossi di morto (dead men’s bones) thin crisp pale brown biscuits. Eating these reminded me of the sweet wafers (and red wine) I consumed at my confirmation many years ago.
I like Barbara Santich’s summation of the banquet:
“…I saw it as a form of sacrament, as much a sacrament of the supper of bread and wine. It contained all the elements of ancient worship and sacrifice to the Gods…Its carnality (emphasised by the serving of red wine only) also spoke of ancient rituals.” 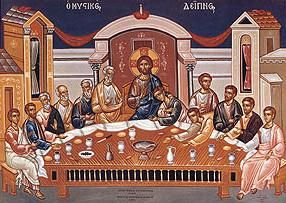 Sacraments of the Church: The Last Supper

Or were we being asked to ponder another question: the relationship between art and food.
As the late  philosopher Alan Saunders pointed out in an article in Australian Way (October 1993):
“With the dawn of romanticism in the 19th century, cooks started to think of themselves as artists, and artists started to think of themselves as disturbers of the peace. But it’s not surprising that nobody was game to make the obvious connection and suggest that cooks too should start offending the bourgeois society that paid them. We don’t want to be offended by our food: we want to be sustained and comforted by what we eat.”
Or as Joanne Finkelstein in Foodatainment subsequently pointed out:
“The aesthetic message was also clear: food, when not mediated by culinary technique, when not prepared, sculpted and designed can be confronting, even repulsive. While art has the reputation for being difficult, and sometimes challenging, it is generally the case that food is not. Yet, how easy it is to change the circumstances and make food dramatic, conceptual and paradoxical.”