Four years ago, Susan Meagher was busy developing townhouses and apartments on the mid-north NSW coast around Coffs Harbour.
“Then the GFC hit and turned everything pear shape,” she says.
Now she’s even busier running six-hour cheesemaking courses at The Cheesmaking Workshop in Northbridge, Sydney, and at various community colleges all over the state.

This month she and husband David, a former lawyer in a Sydney law firm, will be running their workshops in Bathurst, Batemans Bay, Ulladulla, Kiama and Nowra as well as from their new Northbridge premises.
It’s an impressive turn-around in such a short period of time, given she had no former teaching expertise.
“I studied science at Sydney Uni,” she says.  “It was my sister Lyndall who became interested in cheesemaking about six years ago.  She’d run a bulk health food shop in Coffs Harbour, had studied macrobiotics and taught vegetarian cooking when she was younger.
“Originally she attended a course designed for professional cheesemakers.  It was very technical and she spent a lot of time researching and simplifying the methods for the home cook. She now conducts mobile workshops on the mid north coast and in Armidale and Tamworth which she teaches in a simple to understand way.

“She then taught me and I started doing classes two years ago from my home.”
A few weeks ago Susan and David opened their Northbridge premises and began running classes from there. It’s a large open welcoming space, and when I arrived last week, we were greeted with a platter of mini cheesecakes made with quark and mascarpone and tastings of cambembert, fetta and yoghurt.
Then it was into class.  As the day progressed, it slowly dawned on me that making cheese didn’t have to be difficult.  I had attended a cheese course before and found the emphasis on technical know-how and hygiene quite daunting.
We started with the fetta and camembert and while waiting for the curds to set, made some yoghurt and ricotta.

Towards the end of the day, Sue also showed us how to make mascarpone and quark (a German-style cream cheese).
Sue explained everything thoroughly and very clearly, and when we broke for lunch, there was excited chatter around the table as we all realised we’d be able to master the ancient art of cheesemaking at home. 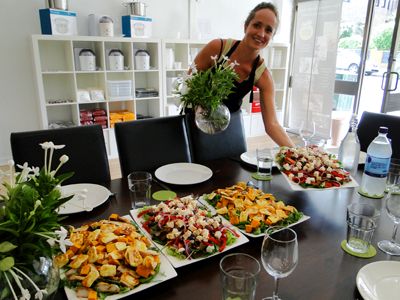 The declious lunch of salads and various home-made cheeses

Detailed workshop notes are provided and we each took home samples of our newborn camembert and fetta to nurse and look after as they matured.
I’m looking forward to making my very own fresh cheeses at home  soon – and with the ricotta, I’ll be making some delicious Spinach and Ricotta Gnocchi for the family. 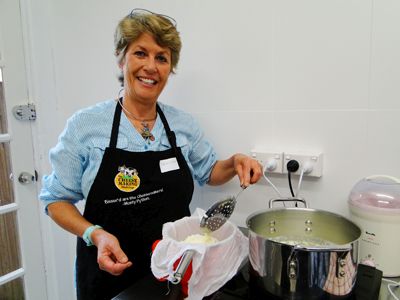 One Response to Cheesemaking workshops for the home cook