During the weeks leading up to Christmas in London, I was overwhelmed by the number of English celebrity chefs and cooks giving advice in the newspapers about how to prepare this year’s festive meal.
The Times featured Mary Berry’s easy turkey with five ingredients, Bill Granger’s boned, rolled turkey breast and a whole turkey smothered in black truffle butter courtesy of Helene Darroze at The Connaught Hotel. 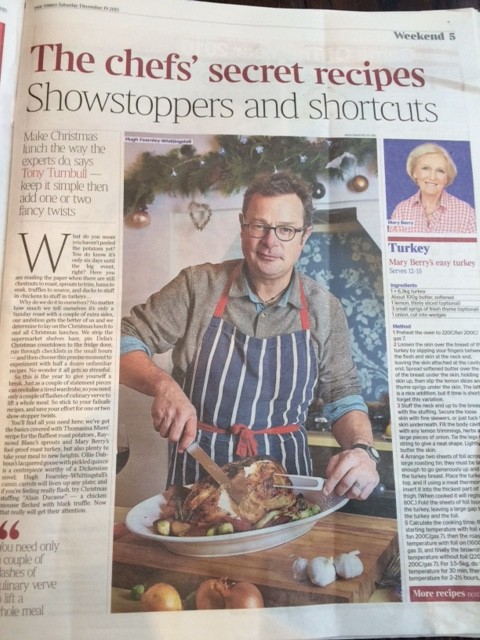 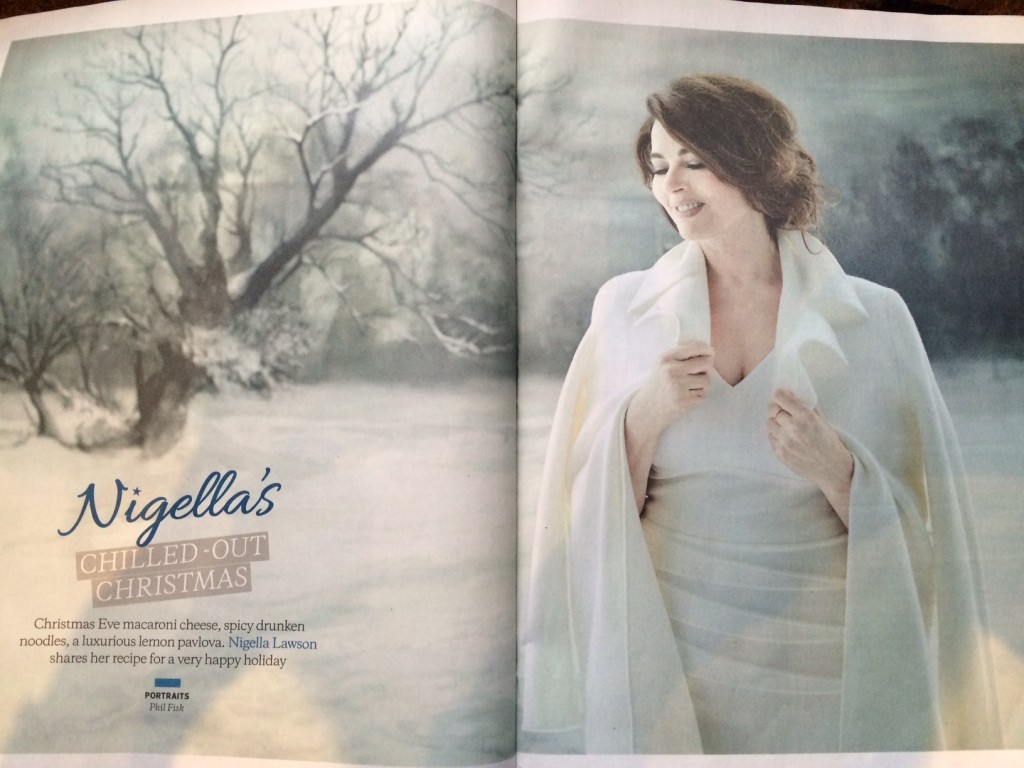 Heston Blumenthal, in typical attention-grabbing style, was having a blast setting the top of his head aflame and telling readers “the best emotion in the world is happiness. It’s not dependent on what people think of you. it’s your happiness.”
And I thought he was a chef. 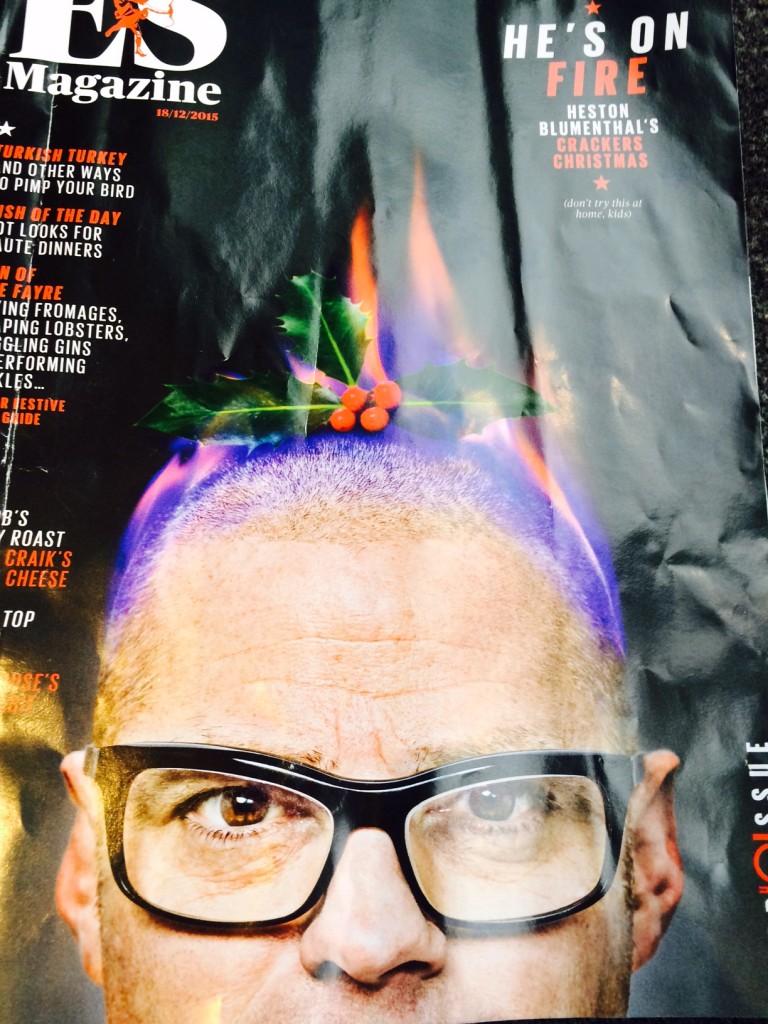 That’s just a sampling of the advice offered in the print media.  Radio, TV and the web were also saturated with food writers and bloggers trying to outdo each other with the latest Christmas recipe.
I was satiated long before the actual day had arrived. So it was a relief to escape the big city and head out through sodden emerald green pastures to spend Christmas day with Daily Mail chief show biz columnist Baz Bamigboye and his wife Trish Evans.
Not that I escaped the papers there as Baz’s job requires him to know what’s happening in the celebrity world every minute of the day (though thankfully there were none on Christmas day).
I arrived on Christmas Eve and sat down, along with a few other close friends and relatives, to a fabulous British afternoon tea complete with freshly sliced leg ham sandwiches, mince pies, endless pots of tea, biscuits, and even a panettone. 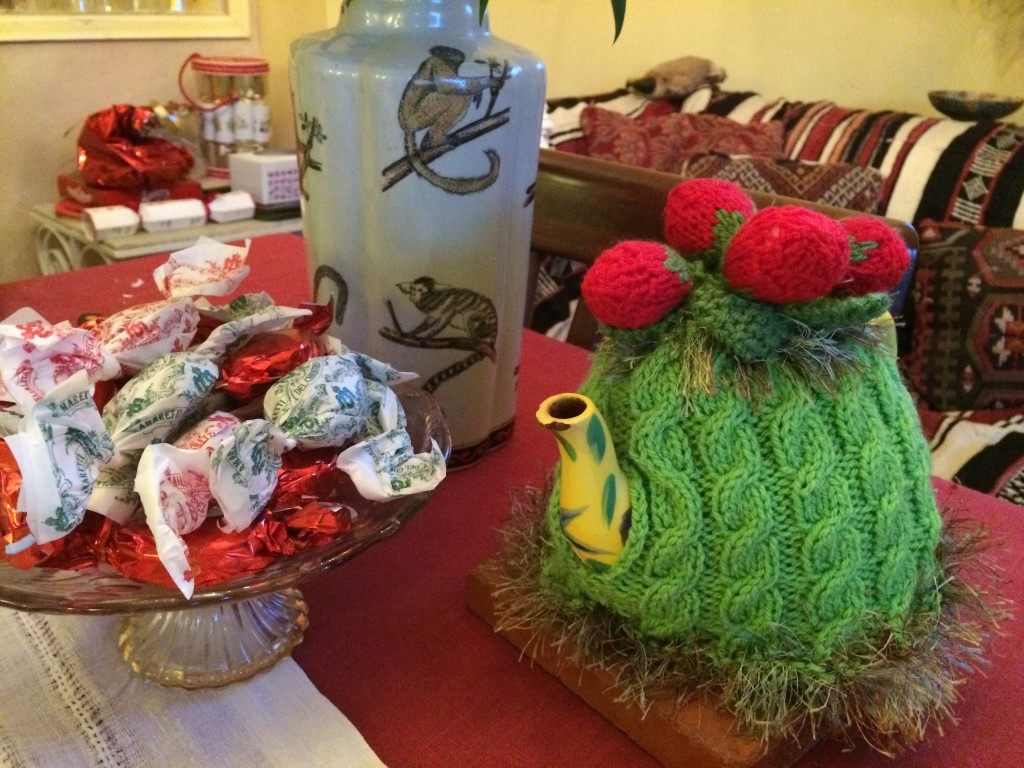 Afternoon tea on Christmas Eve at Baz and Trish’s

Both Baz and Trish had spent much of the day before shopping.
Baz loves food and has a few favourite places he likes to drop into. He bought his favourite mince pies with sugary tops from Maison Bertaux in Soho.
“I’ve been going there since I was a kid,” he told me. “I used to pop in often for a cup of tea.” 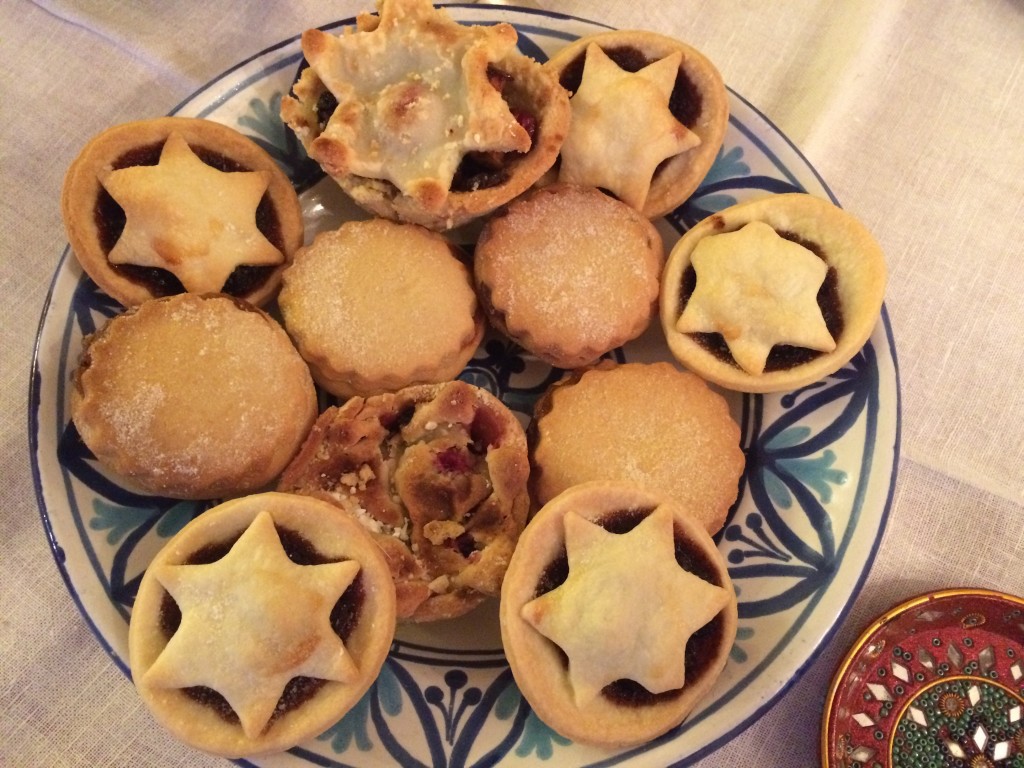 Mince pies: can you guess which are Baz’s favourites? and which are Trish’s?

On the kitchen bench top I spotted a huge bowl of par-baked potato Dauphinoise and another of  bread stuffing ready for the turkey, both covered with tea towels.  Baz had prepared the potatoes while Trish mixed the stuffing which consisted of breadcrumbs, prunes, apricots, fresh thyme, dried tarragon, lemon pepper, eggs, Marsala and citrus zest.
“My sister and I always use dried apricots and prunes in our stuffing,” she told me.
Unlike Madonna, whom Baz interviewed a few years ago, you don’t have to put a gun to his head to get him cooking.
“I’m always working, so cooking at this time of the year is therapeutic for me,” he said.
Both he and Trish enjoy being in the kitchen together.
“When I was living in New York, I fell in love with Trish over her roast lamb with garlic and rosemary. Not many people cooked at home because the kitchens weren’t big enough.”
He couldn’t wait to get his hands on the gigantic turkey from butcher Jamie Wickens at The Ship’s Store, Winchelsea, and took it out of the fridge that evening so it would be at room temperature and ready for stuffing and roasting in the Aga oven next morning. 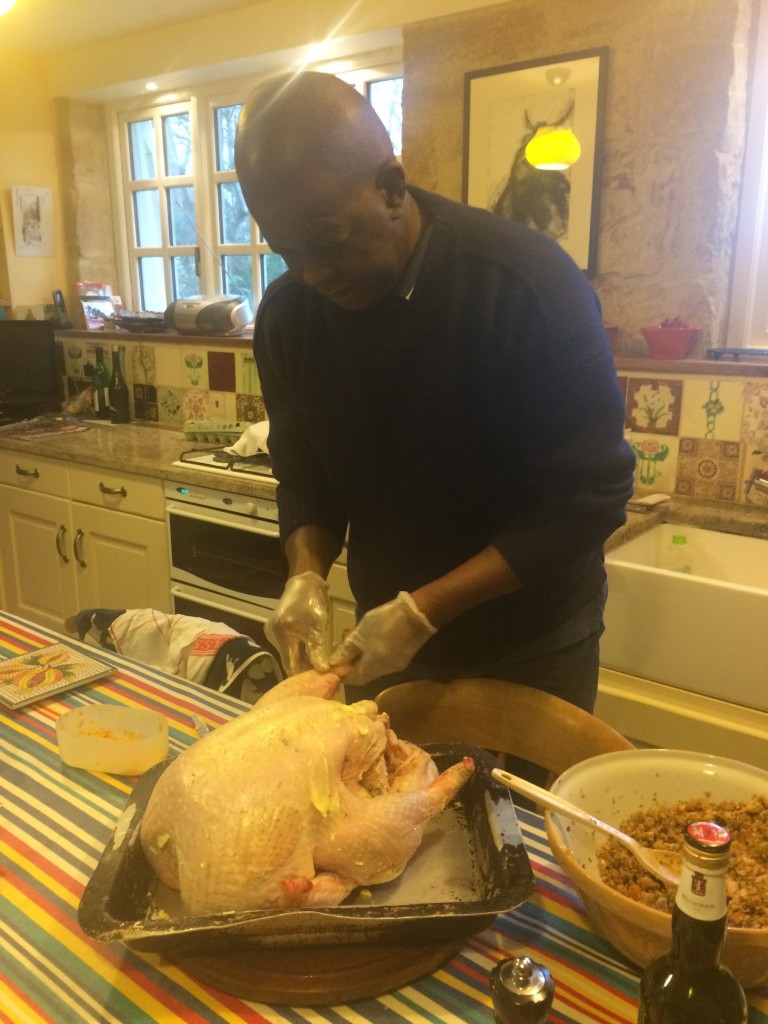 He was up earlier than the rest of the household on Christmas morning to ensure the turkey was in by 9am to be ready for the mid afternoon feast. After stuffing it and enclosing the end with a large piece of bread crust, he rubbed the skin all over with butter and rubbed in a mixture of citrus zests (lemon, lime, orange), finely chopped fresh chilli, garlic and salt and pepper.
“It’s inspired by something I ate in a New York restaurant,” he grins. “And I’m also making Yorkshire Pud because I love it and because I’m as English as Yorkshire Pud.” 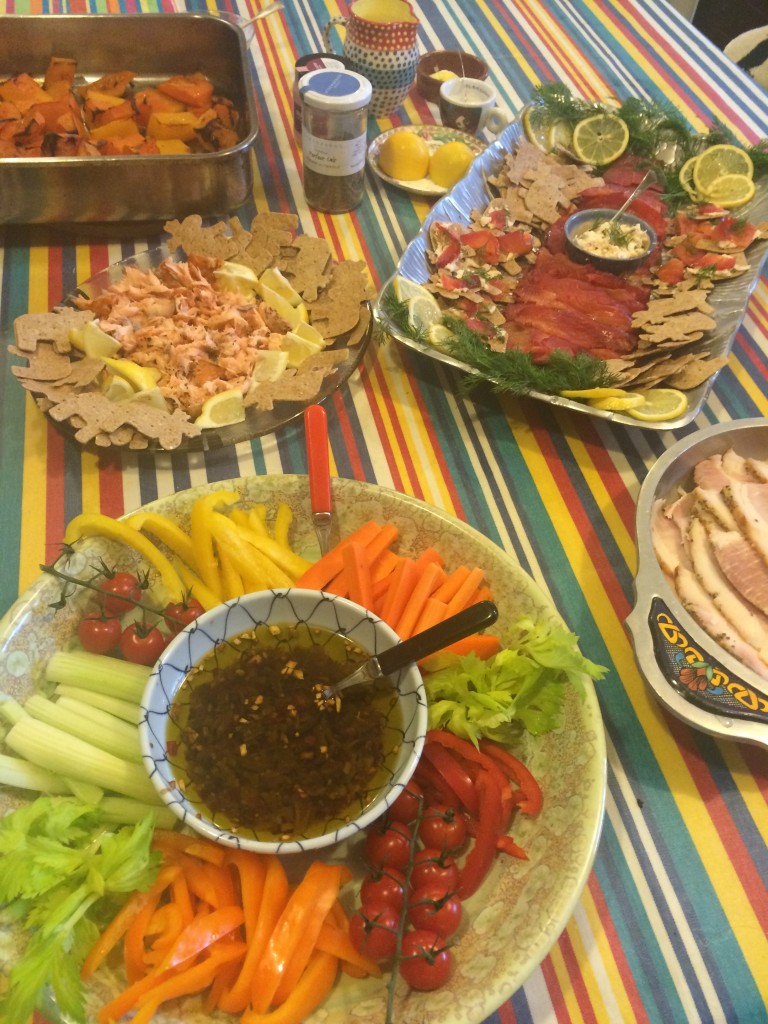 Trish had bought a wide variety of vegetables to accompany the turkey and we all chipped in peeling and preparing the pumpkin, quinces, brussels sprouts, asparagus and peas.
There were also crudités to prepare to accompany the champagne before lunch: red, yellow and orange capsicums, carrots, celery; plus a platter of beetroot-cured salmon and another of hot-smoked salmon with reindeer-shaped crackers. 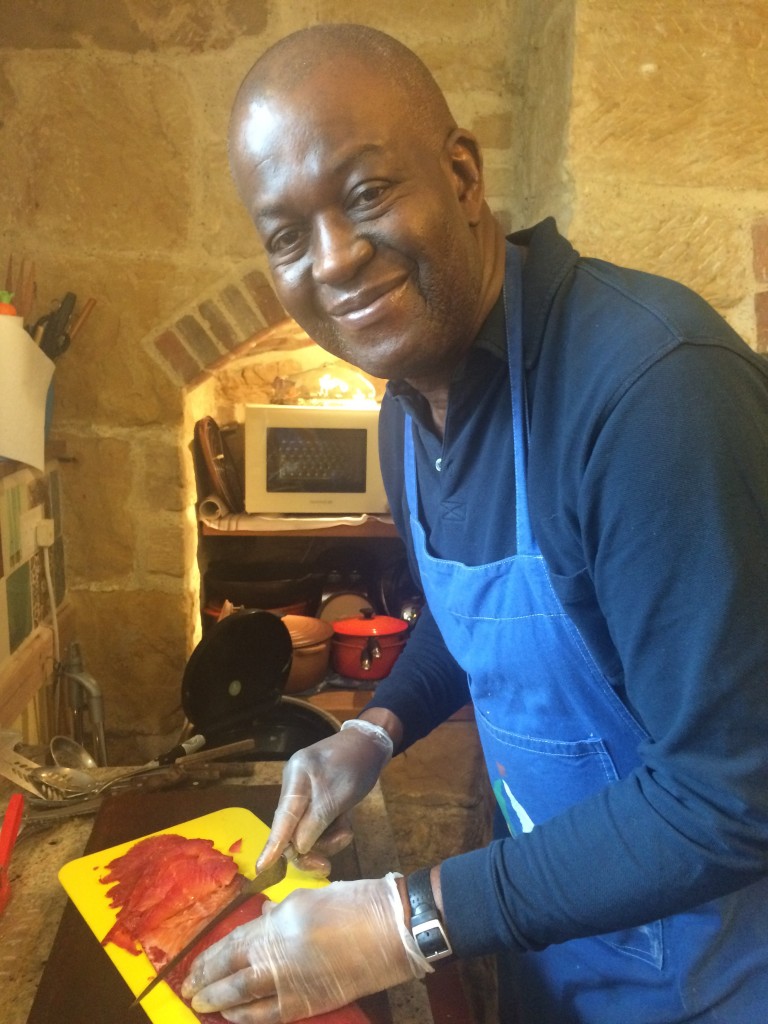 Guests arrived around 2.30pm, and after watching the Queen deliver her Christmas message at 3pm, it was time for the feast.
We didn’t finish until early evening, after which there was present opening and games followed by hot plum pudding with custard, cream and ice cream back at the table.
What a triumph!
Thank you, Baz and Trish, for a such a splendid full-blown English Christmas day with all the trimmings, including the finale of Downton Abbey.