Next Wednesday at the Art Gallery of NSW, John Olsen, the acclaimed Australian artist,  will be talking about his lifelong passion for painting and cooking. 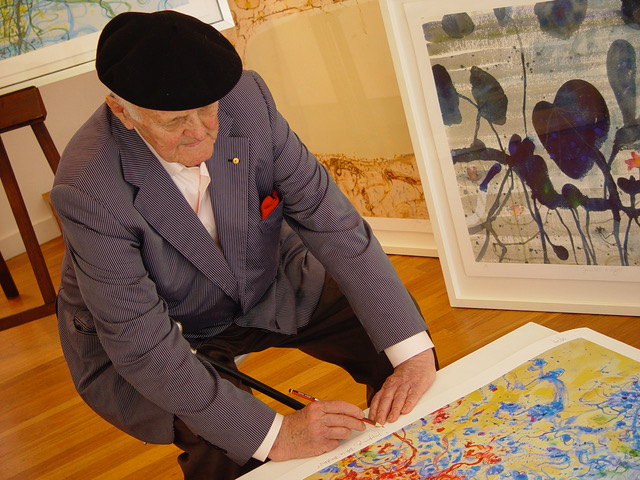 He’ll be joined by three other highly regarded chefs, Lucio Galletto (Lucio’s Restaurant), Damien Pignolet (Regatta, Bistro Moncur) and Matt Moran (Aria, Chiswick).
A few years ago, I visited John and his late wife Katharine at their home in the Southern Highlands and wrote this story about John’s love affair with paella:
John Olsen is seated on a stool in front of his gleaming Italian stove, patiently stirring an enormous paella. Every few seconds he ladles a little simmering stock into the rice and stirs again until it has been absorbed. 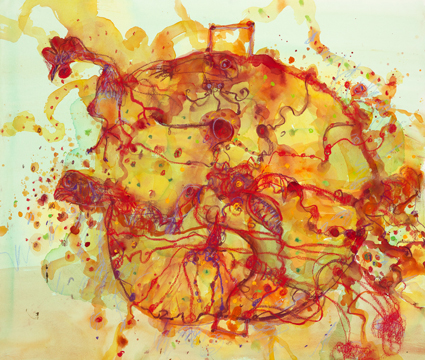 He’s been in the kitchen most of the morning, checking on the home-made chicken stock and chopping onions, garlic, tomatoes, chorizo and chicken breasts for the base of his colourful dish.
On the marble benchtop to his left is a glass of white wine and his walking cane, a necessary prop after a recent knee reconstruction. Nearby are more ingredients, to be added shortly: large uncooked pale orange prawns, tubes of creamy white squid, shiny blue black mussels, a tiny bowl of saffron threads dissolved in warm water, a packet of smoky red paprika and some red and green capsicums freshly picked from the garden.
Today, these are the ingredients from which he will create his signature culinary dish, a sumptuous ‘paella’, a dish he’s been cooking for over half a century and which has found its way into over 25 of his paintings (20 watercolours, 5 oils).
“You won’t get a better paella than this in Australia,” he says. “It’s my post-modern installation,” he adds cheekily as he studs the finished dish with mussels.
“Look, it’s coming up visually now. It’s the colour of the Spanish flag – orange, yellow and red. This is the real thing, I’m telling you.” 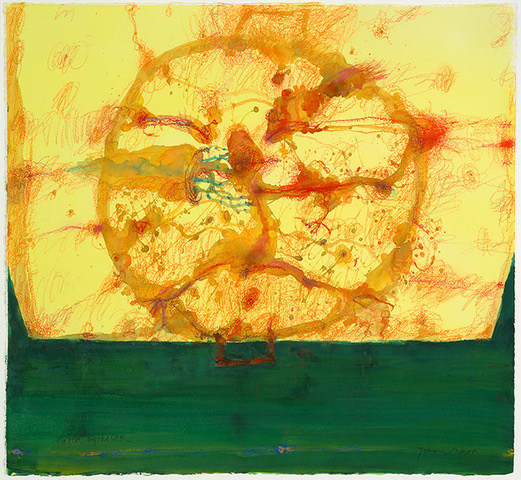 Olsen’s first brush with kitchen lore was as a young boy in Bondi, Sydney, when his mother let him draw all over the pages of her cookbooks (“she used to sing in the kitchen while cooking”) while his first encounter with ‘paella’ took place in the 1950’s when living at Deya on the island of Majorca in Spain.
In his autobiographical book, ‘Drawn From Life’, he speaks of this time:
“We have only one fire, so it is virtually impossible to keep things like beans and potatoes hot (cooked separately in the English way). Soon after we came here we realized that we had to change completely the method of cooking, and in order to make appetizing meals, we began reading books on Spanish cooking. I noticed that most recipes could be made from a single source of fire. The aristocratic ‘paella’ is an example of this.”
He explains that ‘paella’ was invented centuries ago by field workers who cooked all their leftovers in a ‘paellera’ out in the open over an open fire’.
“It’s a great picnic dish,” he adds. “Something men do, not women. There are lots of variations – there’s a famous one made with snails, others are made with lima and butter beans and also rabbit and chicken.” 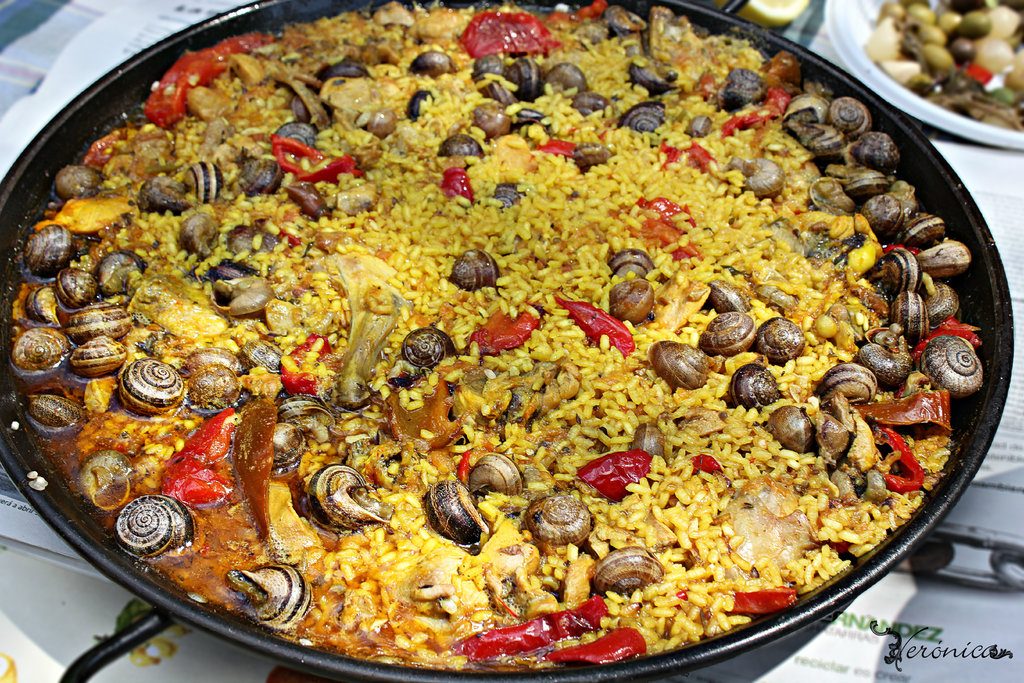 Paella with rabbit and snails

Freshly chopped parsley is required for the final flourish.
Fifty years ago, the young Olsen had never seen a capsicum or pepper, let alone a zucchini or eggplant.
“It was such an imaginative hit for me to visit the markets off Las Ramblas in Barcelona,” he muses. “There were chickens with their heads still on dipped in saffron and tied up as though they were flying through the air. The kind of surrealism you see in Dali.”
Saffron, the colour of the sun, is Olsen’s colour and one he has used in many of his still lifes and landscapes – and continues to use.
“Paella is a derivative of the sun, which is a source of energy,” says son and gallery dealer Tim Olsen. “When we eat, we eat the sun’s energy.”
“Food provides an aesthetic which he applies to his work. He uses his cooking dexterity in his work, drizzling watercolour the way you drizzle olive oil. 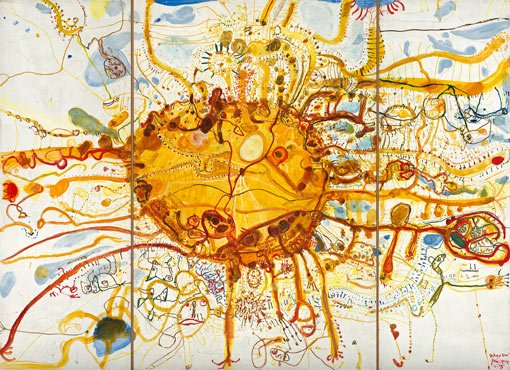 “And his kitchen themes are popular. ‘Seafood Kitchen’, painted in the late 1990’s, fetched the highest price paid for a watercolour by any living artist in 2003.”
Both Olsens recall driving down to the beach when living in Andalusia and cooking ‘paella’ on the beach.
“The tradition continued when we returned to Sydney and were living at Watson’s Bay,” says John. “We’d pick trees of mussels off the pylons of the wharf and cook them up in a copper pot with crushed garlic and white wine and feed my art students.
“One day we loaded up a sugar bag with mussels and the dinghy capsized!”
The interweaving of food and art is not uncommon, begging the age-old question “what is art?” Many chefs are spoken of as “artistes” and their plated dishes described as works of art. Sadly for them however, their creations are ephemeral, demolished soon after being placed in front of a diner.
It’ll be interesting to hear what the three celebrated chefs have to say about the connection between food and art on Wednesday evening. 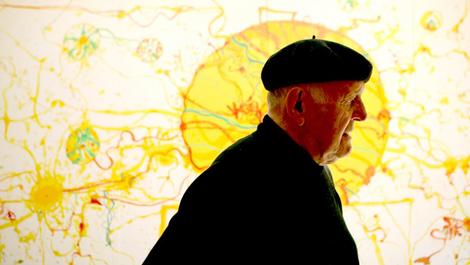 Everything under the sun … John Olsen in his Bowral studio with his paella painting – “it’s about how these particular colours have infected your sensibility.”
Photo: Steven Siewert (courtesy of SMH)

Can there, in fact, be a recipe for art: can a chef or artist ever know exactly how a final dish or painting will finish?
As Olsen says in John Olsen: a recipe for art (Thames & Hudson).
“I have a special affection for chefs, they are fellow creators, the best re-invent their sense of place – be it Cornwall, Italy, the south of France or Spain.”
You’ll find his recipe here.