“What is karma?”
That was the question which bookended the first and last day at the recent Ubud Writers & Readers Festival in Bali.
Having spent a few years immersed in Tibetan Buddhism (though never signing up to their belief in reincarnation), I was intrigued to hear what some of the internationally diverse writers invited to the festival had to say.
For Balinese Hindus, Karma Phala is the spiritual principle that each action has a consequence equal in force and similar in form.
One of the first events looked at how kindness is synonymous with karma: “make a conscious choice to do good to others and good will come to you, though despite our best intentions, true kindness often eludes us.”
Speakers included UK poet and playwright Andy Craven-Griffiths, children’s book author and literacy activist Debby Loekito Goeyardi, child-protection lawyer Dian Samsita, social activist and former Miss Indonesia 2015 Maria Harfani. 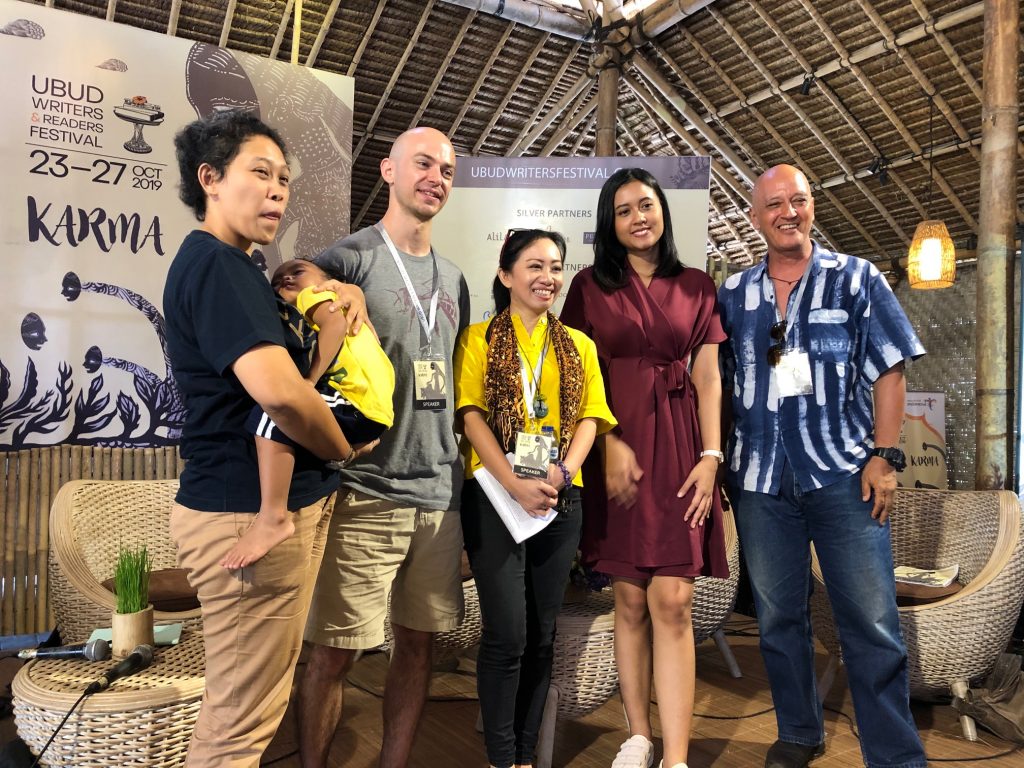 Andy Craven Griffiths gave insightful personal examples of how our biological feedback system works.
“I’m an atheist so I look at it from a biological point of view – how our bodies relate to it. I grew up with kindness. We were seven kids, five of whom were fostered,” he said.
“Hearing or seeing a kind act releases oxytocin and helps the other person be kind back to you whereas if someone shoots at you, it releases cortisol and the fight/flight response.”
For Andy, kindness is the quickest route to being close to someone because it results in dopamine release.
“Many of us feel overwhelmed but if more of us were prepared to be honest and speak up with kindness, it might begin to change things.”
For Debby Loekito Goeyardi, a Balinese Buddhist, kindness needs to be practised daily.
She gave an example of her late mother who opened a “free school” in a kampong and gave cooking classes and free food to children from broken homes.
“She spread kindness. When she died, many people spoke of the way she had helped them. Some of those children later became doctors.”
As she spoke Debby’s beautiful wide smile radiated over the audience.
“Smile and the world will smile back at you” is her philosophy and one she practises daily.
Plenty more stories and insights were offered by the other panelists despite  moderator Rio Helmi’s condescending, dismissive attitude which unfortunately added a jarring note.
He could learn something from the gracious internationally renowned chef and cookbook author Yotam Ottolenghi whose food and colourful style of presentation has become a cuisine in itself. 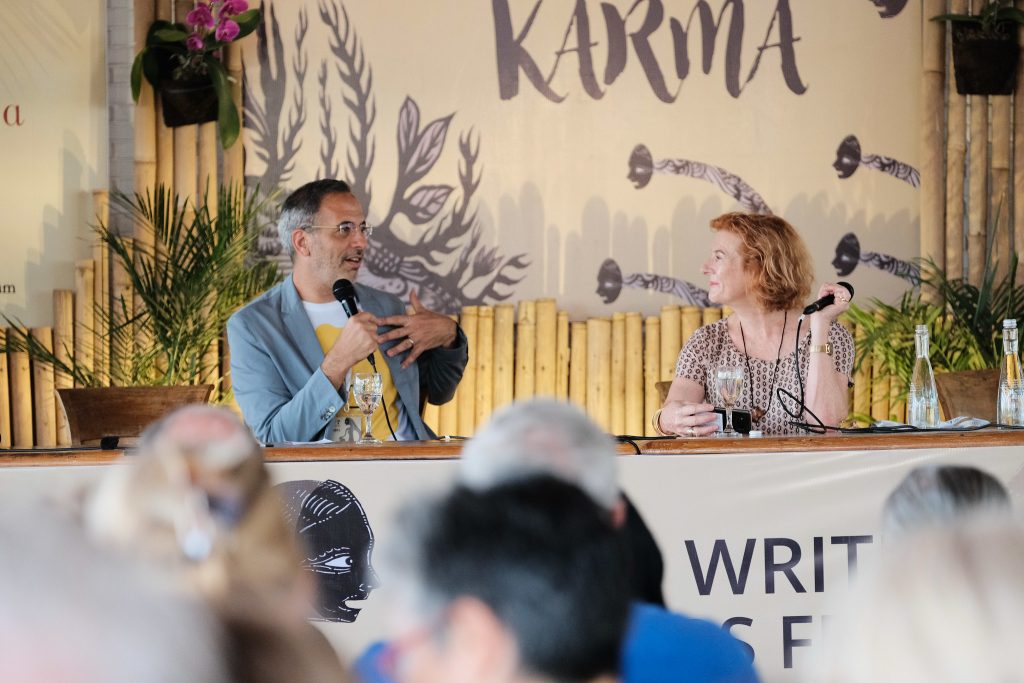 Famous for four self-named London delis Ottolenghi and restaurants Nopi and Rovi, he’s published seven bestselling cookbooks including his latest award-winning cookbook Simple, and writes a weekly column in The Guardian’s Feast magazine and a monthly column in The New York Times. In his session with Aussie food writer and TV presenter Joanna Saville, he spoke of his intention to create a family-style business that people love to be part of.
“How would you describe your non-sprituality?” she asked halfway through the session.
“The business I’m in is stressful and people can behave reprehensibly,” he said “If I walk into a room and there’s a bad atmosphere, I want to be out of there fast.
“I have no tolerance for abusive behaviour. I’m not religious: what you see is what you get. Food nourishes people. I want my places to be nourishing.” 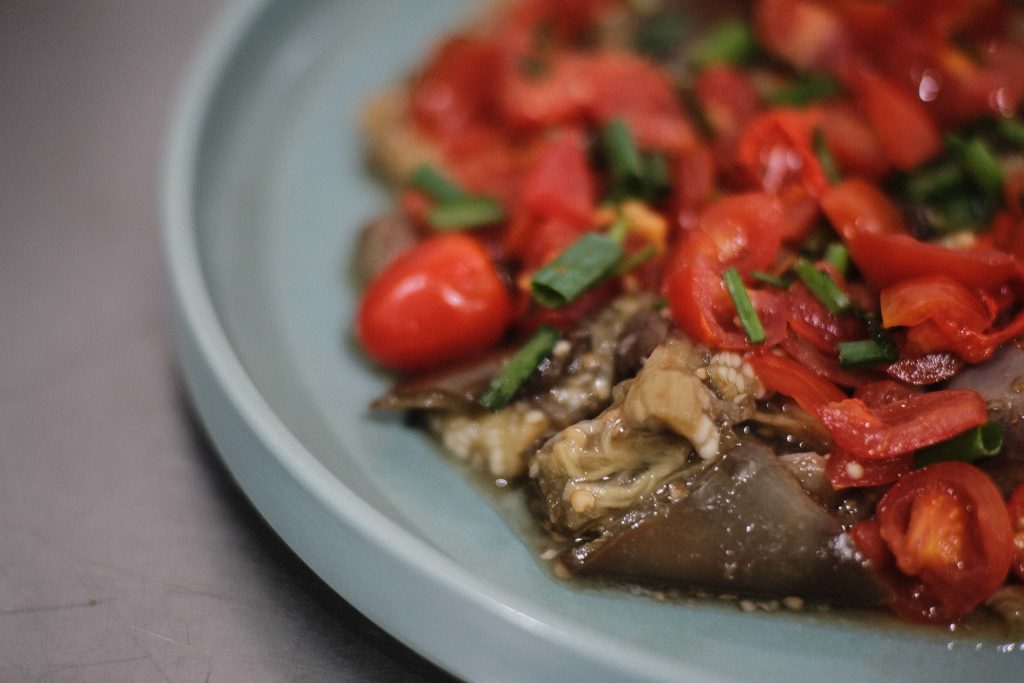 The son of Italian Jewish and German Jewish parents, he grew up in Jerusalem during the 1970s and 1980s.
“It was a more positive place then,” he said. “My parents arrived in Jerusalem in 1939 just in the nick of time. My first language was Hebrew and even though I feel stateless now and haven’t lived there for over 20 years, it’s the place that defines me.”
It’s also the name of his very first cookbook written with fellow chef and friend Sami Tamimi. Both were born in the same year, grew up in Jerusalem – Sami in the Muslim east and Yotam in the Jewish west – moved to Tel Aviv about the same time, but never met until they worked together at Baker & Spice in London.
“The idea of doing a book about Jerusalem didn’t appeal at first because it’s a very traditional and religious city, poor and conflict-ridden and we couldn’t wait to escape those things.
“It wasn’t until we re-visited and started walking down the spice alleys and through the bazaars that it started coming together. You can smell history there, it’s in the texture of the stones.
“Jerusalem was our first book together and we started working out in concentric circles from there. My next book will lean towards Mexican, and Sami has a Palestinian cookbook coming out next year.”
Food visuals are important to both Yotam and Sami and their delis have become famous for their displays of food on platters and stands of varying heights. 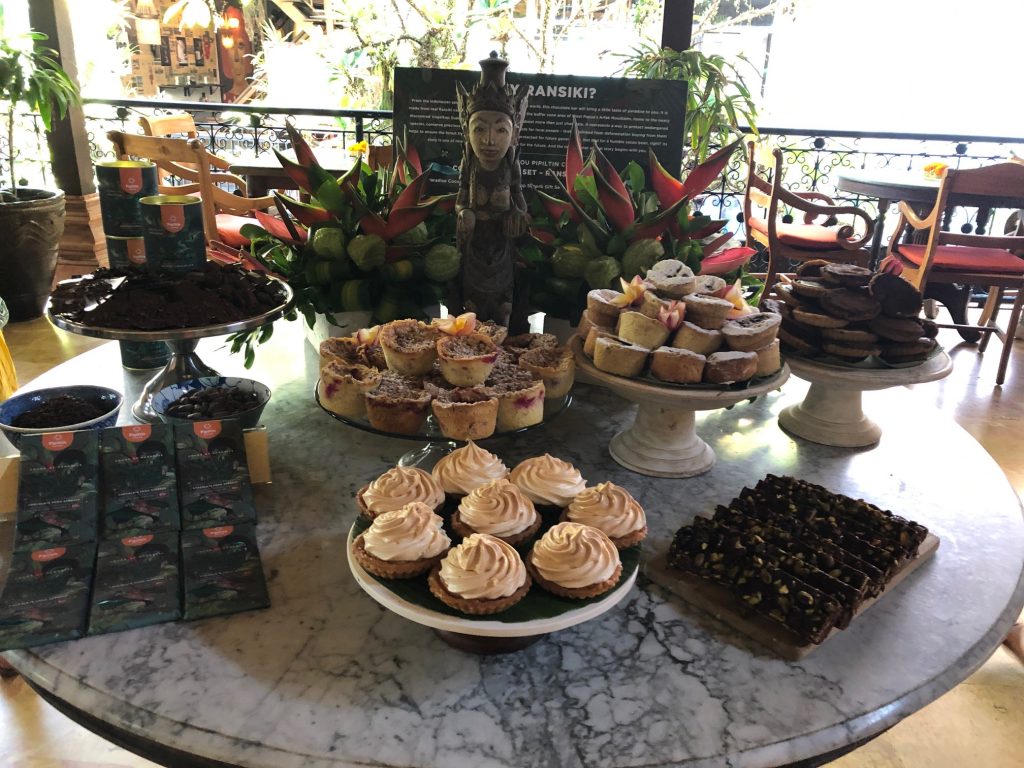 “We knew if it didn’t look good, it wouldn’t sell so we strove to make it look beautiful. I still spend a lot of time talking to chefs about the look of the food.
We call it ‘Food Smiles’.”
I broke into a big smile when I heard that he’d just given the Observer Food Monthly Lifetime Achievement 2019 award to the brilliant British cookery writer Claudia Roden whose books on Middle Eastern and Jewish food are not just recipe books but fascinating explorations of cultural anthropology.
“Her books have everything,” he proffered. “You don’t need ours . Sami and I modernised them, made them less brown (laughs). By that I mean, as an example, that hummus is brown – we just added a bit of salsa or pickled onion on top.” 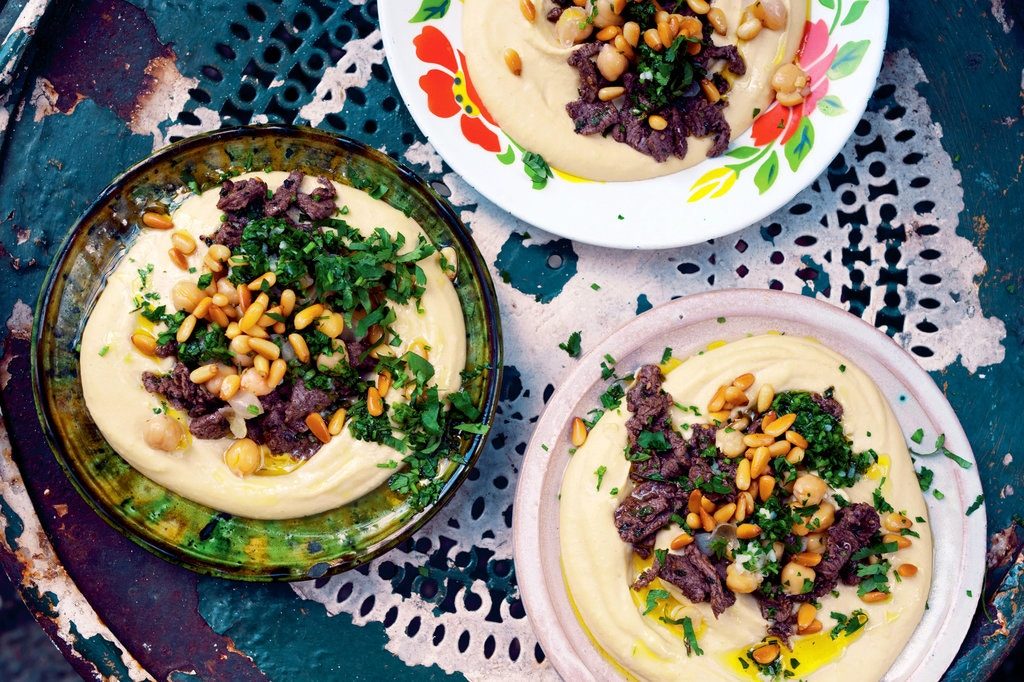 What I most appreciated about his philosophy on food, apart from his acknowledgment of the importance of Roden’s work, was his recognition that food is a great way to bridge gaps between people.
“People who won’t talk to you about anything else will talk to you about food. When I was making a BBC programme in Jerusalem I came across a traditional Palestinian woman who was buying a sweet flatbread with cheese inside.
“She invited me to her house to show me how to make some of her dishes. She showed us how she steams couscous in lamb broth then started telling me about her family and her life.
“It was the first time ever for me in a Palestinian home, awkward yet exhilarating, because we were enemies at that time.”
How is food political? asked Joanna.
“Because everyone eats and we’re always defining our identity,” he said. “In Israel and Palestine you can’t put something in your mouth without it being political.
“Think of the Hummus Wars. A dish like hummus is a dish of many nations, though I have to say that Greek hummus isn’t very good (laughs).
“It’s not an Arabic dish per se, though it defines lots of people.  It’s political because it’s intensely personal. Sami’s new book will irritate and infuriate many which will be interesting.
“There are so many layers to food – historical, philosophical.”
I’d intended to go to Ottolenghi’s lunch at Casa Luna on Saturday, the third day of the festival but the dreaded Bali Belly struck me down and I was unable to attend (my karma for using local tap water?)
Fortunately for me it only lasted 24 hours. 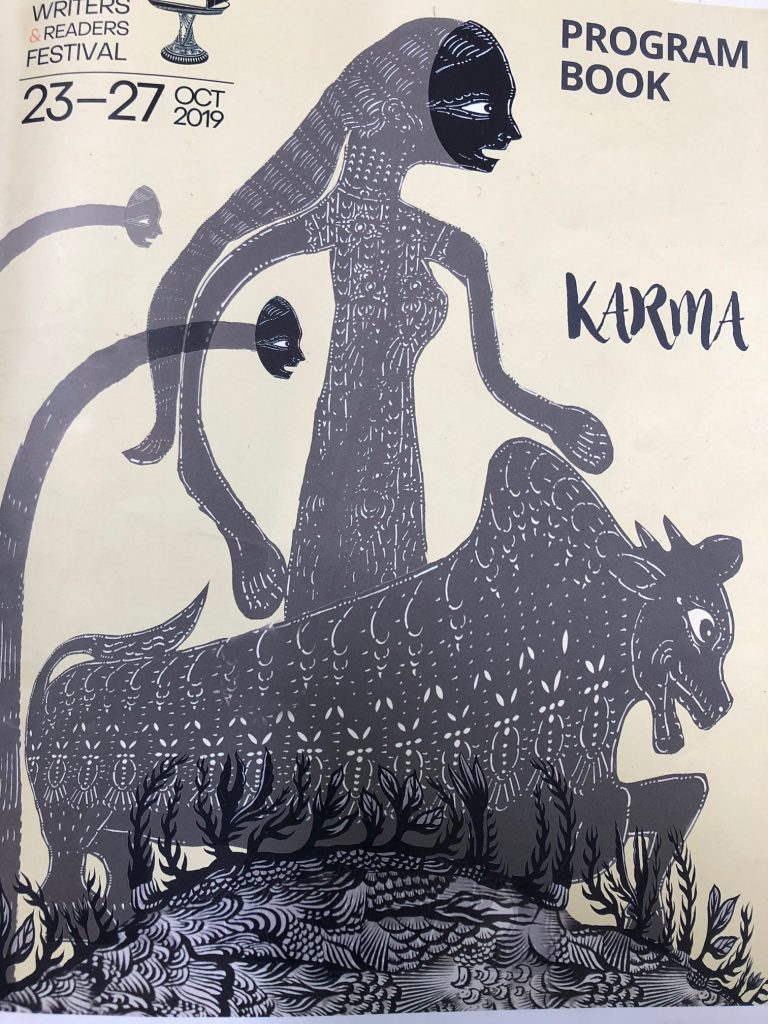 At the very last session of the festival, entitled Decision and Consequence, the Indonesian Ambassador of the International Academy of Culture and Arts, Prabhu Darmayasa, told us the Sanskrit definition of karma.
“Karma means for every action there is a reaction. I’m not talking about the religious or spiritual definitions which only tangle you up.
“There’s too much abuse of this word. In India, for example, a cripple is told it’s because he has bad karma. That’s a very limited understanding which justifies the caste system.
“Balinese believe in karma, not fate.  They fear the consequences of bad actions.”
His advice? “Bring karma into the reality of your life. Create your future now.” 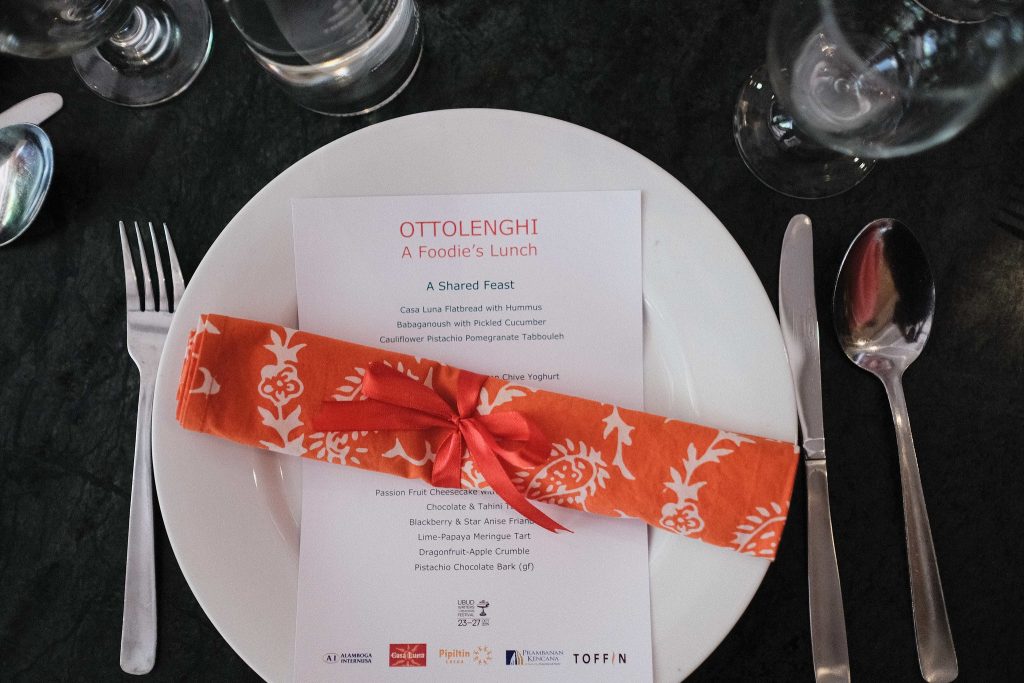