If you ever find yourself walking around the wharves at Pyrmont, Sydney, you’re likely to come across a very arresting sculpture. 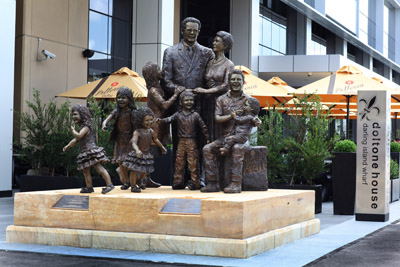 "Life From A Suitcase" - The Signorelli sculpture

Titled “Life From A Suitcase” and cast in bronze, it depicts Biaggio and Fina Signorelli and their seven grandchildren.  The sculpture is a gift from the Signorelli family to celebrate migration and is imbued with significance.
Pyrmont Wharf 12 is the very spot where Biaggio first set down his suitcase as a 19 year old.  In 1954 he left Poggioreale in Trapani, Sicily, and migrated to Australia.
Just around the corner from the sculpture is Signorelli Gastronomia, a stylish restaurant and food emporium run by the Signorelli family, and tribute to the success of Biaggio Signorelli’s endeavours in his new country.
The youngest of five boys, Baggio found a job with his brother at a Willoughby fruit shop named Signorelli Bros. By 1964 – with very little English at his command – he purchased a fruit shop in Lakemba and named it Antonella after his mother.
In 1967 he married Fina who gave birth to their three children, Nina, Paul and Anna. His mother and four brothers  also migrated from Sicily around this time.

Soon after buying the Lakemba fruit shop, he hired his brother-in –law to work with him, and it was during this period  they thought of the idea to look for a function venue for themselves. Biaggio was now working weekends to pay off his house.  In 1973 they purchased the Claredon Ballroom Riverwood and in 1974 took another innovative business step by buying a department store in Lakemba and expanding the fruit shop into a self-service concept.
Then in 1988 the Signorellis opened Mother Nature’s Fruit World, one of Sydney’s first food emporiums selling fruit, deli goods, liquor, a newsagency, fish market, bread shop and butcher.
“He’d gone from food on the shelves to food on the plate by catering weddings at the function centre,” says son Paul.  “We’ve gone back to that by including Signorelli Gastronomia and the Biaggio café into the Pyrmont business”. 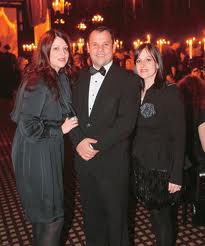 In 1990 Paul was involved in a car accident and everything went on hold so that the family could care for him.  Family first, business second, was Biaggio’s motto.
The family bounced back and in 1995 purchased Daltone House at Sylvania Waters, a large catering/reception business.  In 1999 they won the tender to occupy the former Sydney Haroubr Casino site at Darling Harbour Wharf and then in 2001 bought the freehold on the heritage-listed woolshed at Jones Bay Wharf which opened as a reception centre in 2004.
Five years later they were given the green light to develop Signorelli Gastronomia, the fabulous food emporium which opened in February last year  (Linguine Vongole) . They were also given the go-ahead to devleop an 800 person event centre, 140 seat cafe, and 200 person convention centre on the same site.
In July last year, Doltone House won the national Australian Business Award for environmental sustainability:  Biaggio would have been so proud.  Sadly, he passed away in June 2008.  But what a wonderful legacy he has left: a true ‘rags-to-riches’ story.