At Soulatso Tavern in Skala Eressos on the south-west coast of Lesvos, Greece, the little dishes of mezethes arrive fast and furiously. 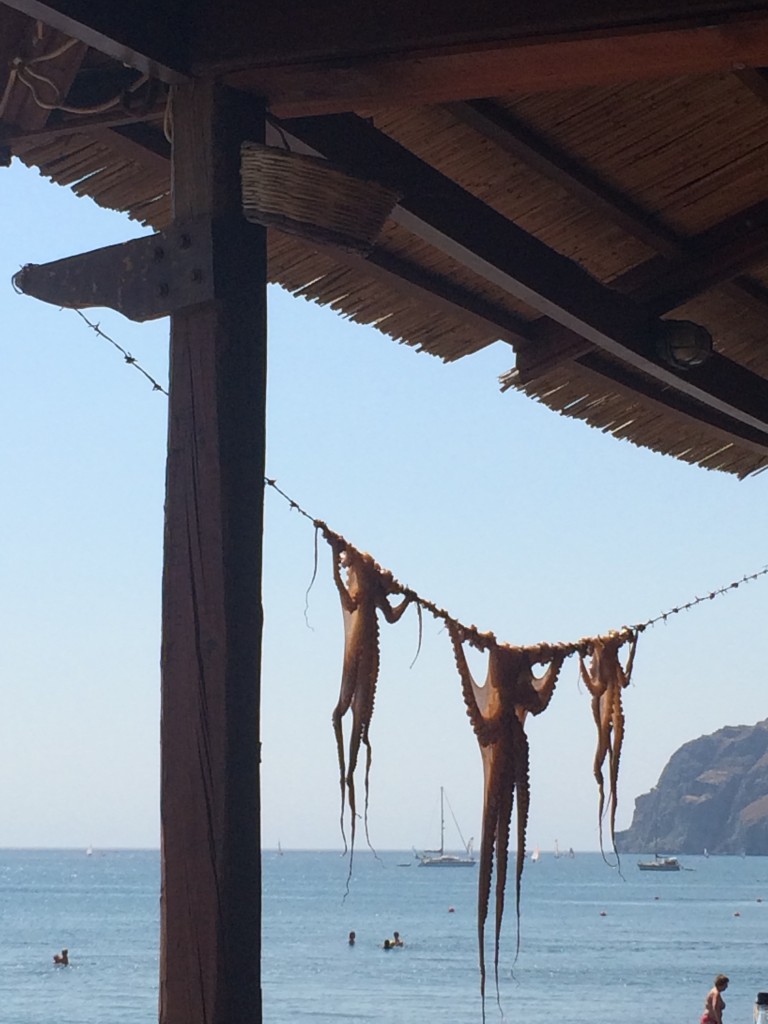 Octopus being hung out to dry at Eressos beach, Lesvos

It’s mid-afternoon, and most holidaymakers are only just making their way up from the beach for lunch at one of the taverns which line the waterfront of this village, famous as the birthplace of Sappho, the great ancient lyric poet.
The cool, silky water of the Aegean Sea combined with the fierce August sun have made us hungry and, according to locals, this tavern is the best place to eat.
There are nine of us so there’s no hesitation in ordering a long list of dishes (you need  a small group of around 5 – 6  adults to really enjoy mezethes).
As journalist Christos Kalountzoglou points out in his booklet Taste Lesvos:“Lesvians like to think of themselves as connoisseurs (meraklides).When we sit at a table to enjoy the ritual of eating, one plate won’t suffice, we want the whole package, the whole deal; our starters, our salads, our pulses or our meat, ouzo or wine included.
“There is no ritual if one settles for less. This procedure is followed every day, in every house of the island, as well as in taverns, coffee shops and restaurants, which welcome locals and visitors…” 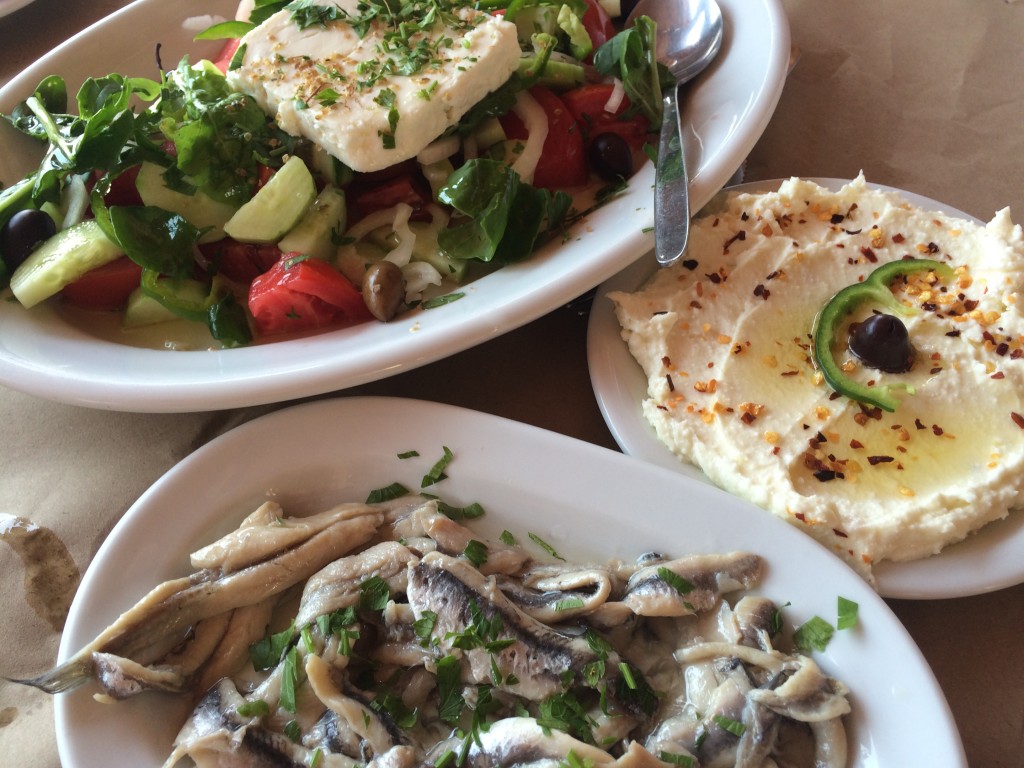 First to be plonked down on the table is the ubiquitous Horiatiki or Greek salad with its generous chunks of  ripe red tomatoes, half-moon slices of peeled cucumber, thin slices of red onion and green capsicum and whole black olives, topped with a thick slab of feta dusted with wild local oregano.
Dressed with a little of the local extra virgin olive oil from the island, and a flourish of rocket leaves and chopped fresh flat-leaf parsley, it tastes better than any Greek salad I’ve had, something I can only put down to terroir.
“Is it the land? Is it the salt?” asks Kalountzoglou. “Is it the breath of the volcanoes? Whatever it is, the Lesvian land grows herbs with unique aromas and tastes.” 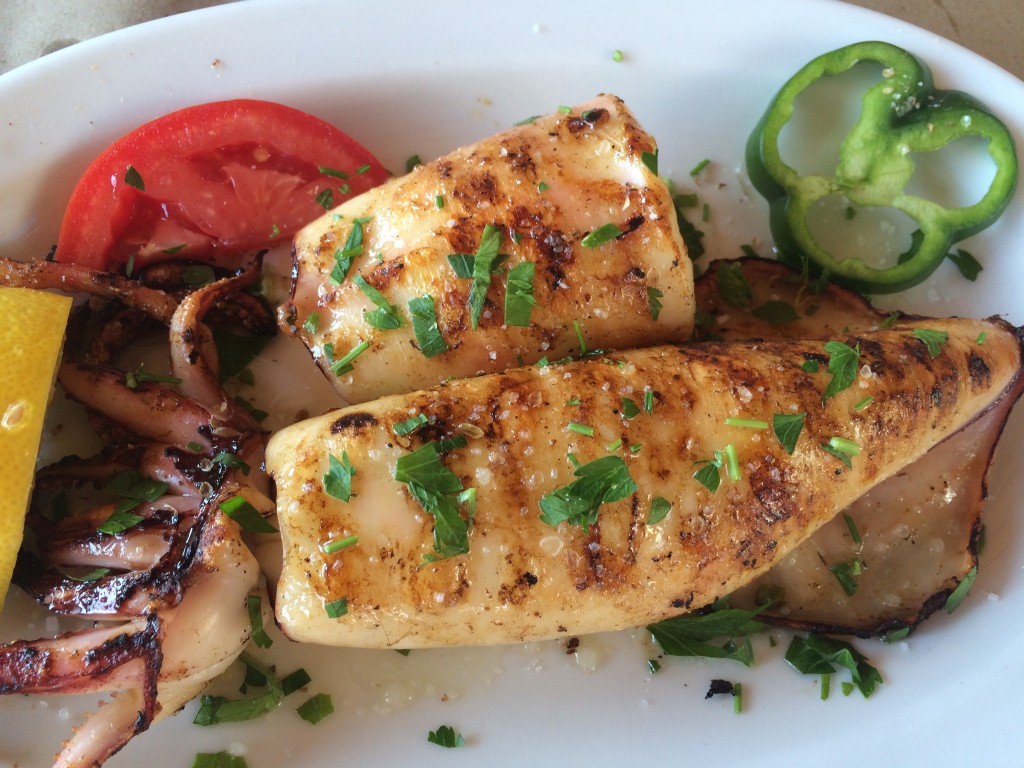 Whole grilled calamari, just one of many delicious seafood dishes at Saloutso Tavern 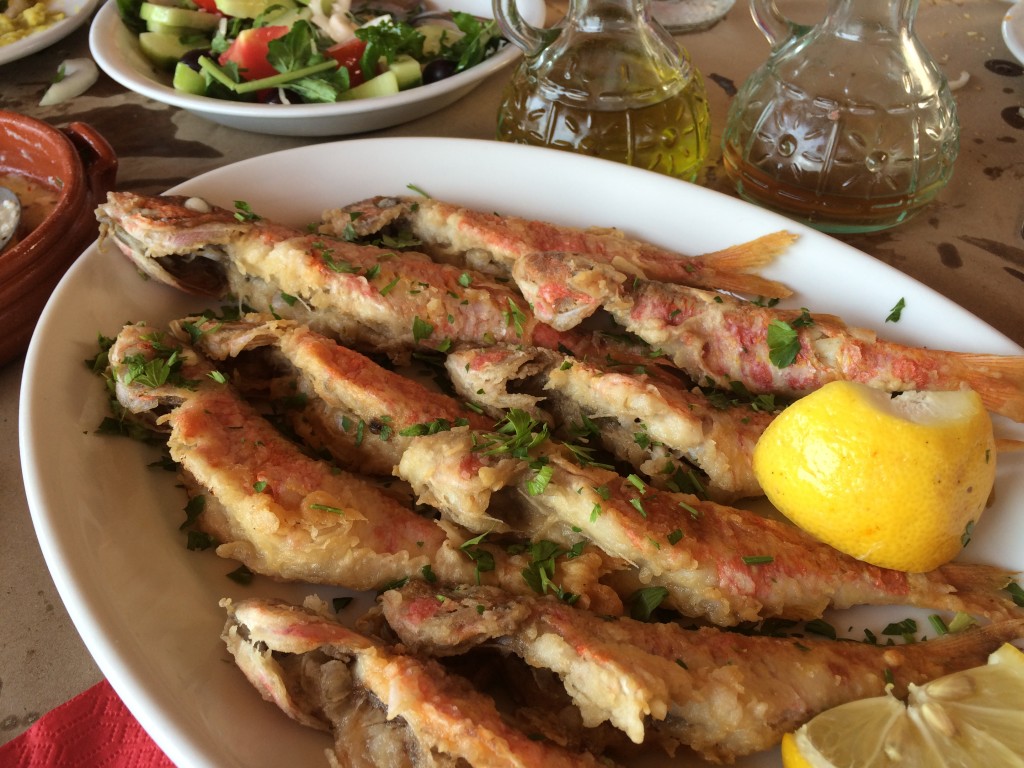 Ask us what the fishermen caught today, says the menu. The catch of the day comes to Soulatso from local fishermen every morning just across the Aegean Sea…The vegetables are from our garden or other local gardens.  The cheeses are all from the island of Lesbos and most of our recipes are from our grand grand grand mothers.It ticks all the boxes for the perfect Mediterranean diet, the only drawback being that you’re tempted to eat too much because it’s all so delicious.
As well as being surrounded by the glorious Aegean Sea, Lesvos is studded by two large gulfs of water – the Kolloni Gulf in the centre of the island and Gera Gulf in the south-east near the capital, Mytilene.
The Kolloni Gulf is surrounded by mountains on two sides, a fertile valley on another side and opens to the sea via a narrow channel. It is full of sardines which are said to be the healthiest in the world due to their high mineral content. 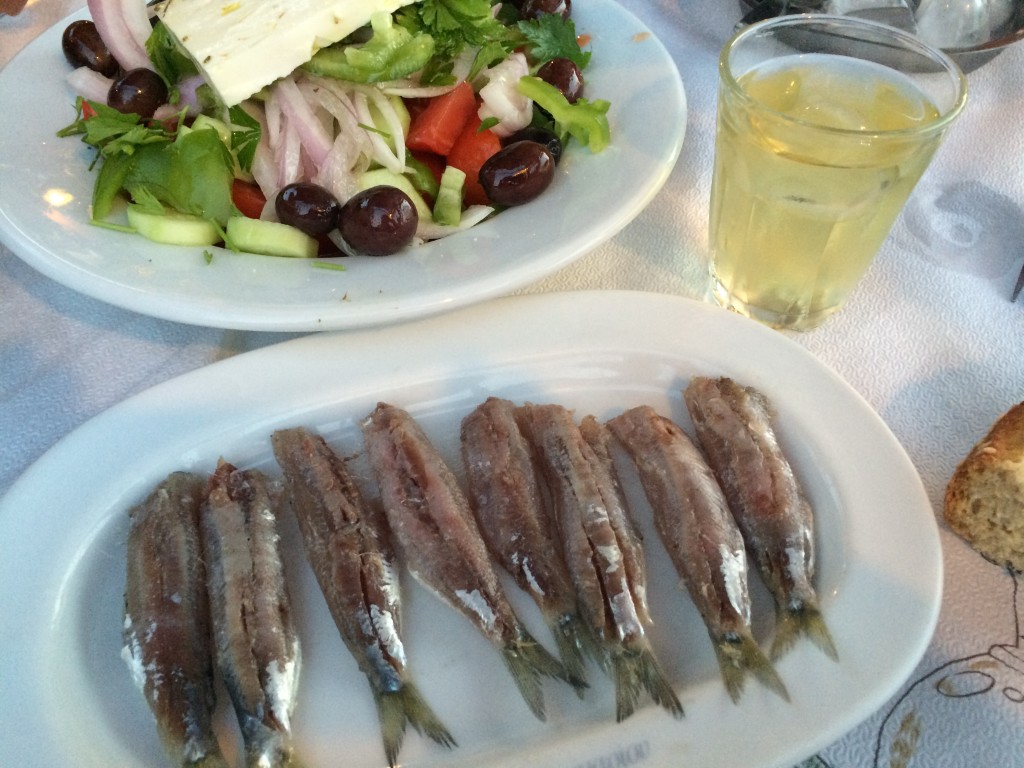 Whether grilled or fried, these sardines are the tastiest I’ve ever had, and the local speciality, sardeles pastes, or raw sardines cured in salt, are outstanding. If you’re in Lesvos when they’re in season during the months of July- August, I highly recommend you order a dish as they are unique to Lesvos.
We found them on the menu at Kamini restaurant in Pedi, and also at Gregory’s Taverna at Nyfida, near the mouth of Lake Kolloni. They must be eaten the same day they’re cured and are a real treat.
At Gregory’s you must also try La Kerda, another local speciality, which is bonito tuna cured in salt, sliced and then preserved under olive oil. And it was at Gregory’s that I was introduced to the little koutsomoura (or half face) fish, cousins of barbounia. 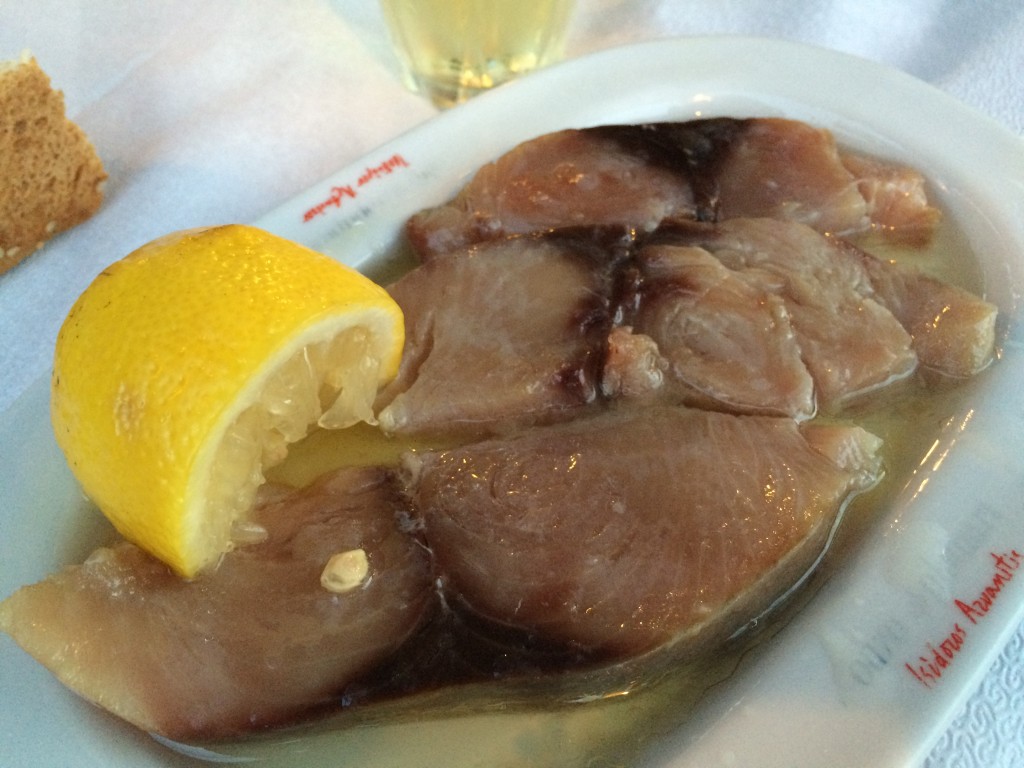 Lesvos is also famous for its olive oil, and no wonder. There are 11 million olive trees on the island, approximately the population of Greece. The main varieties are Kolovi, Mytilinia and Adramytiani which are cultivated for oil production and yield the typical yellow-green oil with its smooth, velvety texture. Because the island is mountainous, using fertilisers is not profitable which means the olives retain the taste of the island. Many Australian Greeks ship large tins of the oil shipped home to them.
At Agia Paraskevi, a prosperous farming village in the centre of the island, an impressive Museum of Industrial Olive Oil Production has been established on the site of the old communal olive oil mill where you can see how the olives used to be crushed and pressed. 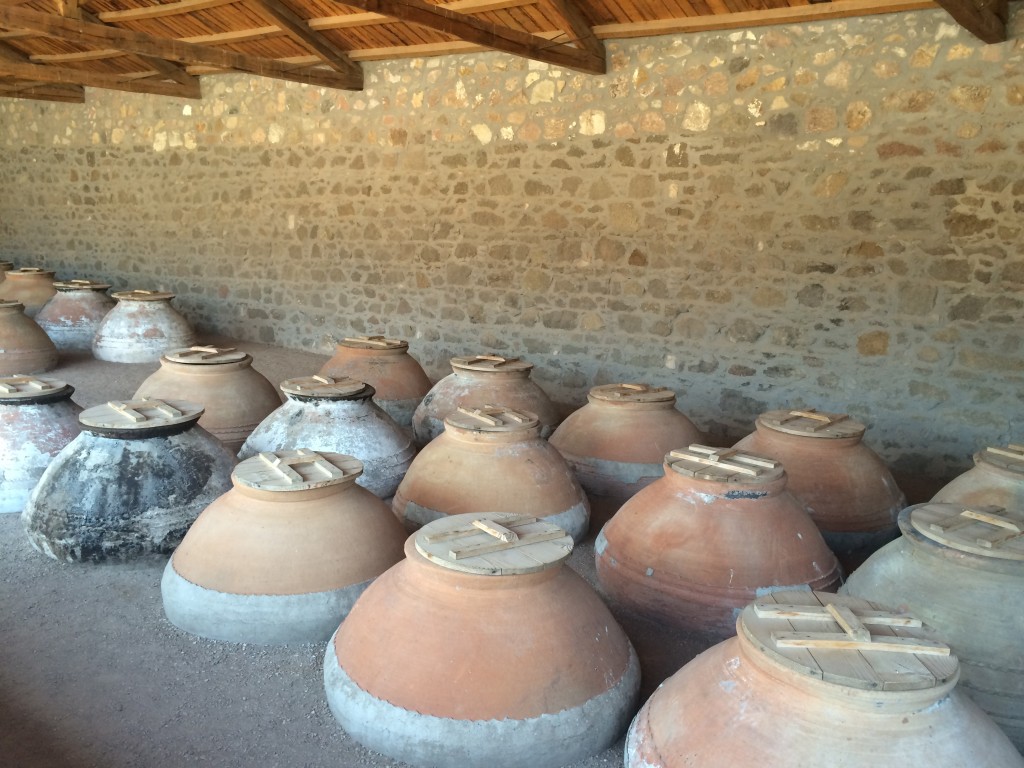 Another product unique to the island is ladotiri, a farmhouse white sheeps milk cheese which is preserved in olive oil and wrapped in paraffin. The longer it remains in the olive oil, the better it tastes.  Mizithra (a soft white or sweet cheese), graviera (a spicy cheese) and feta cheeses are also made on the island.
In fact a large industrial export kitchen for making Aeolikos feta can be found in the middle of the olive groves outside Agia Paraskevi.  Sheep and goats milk is picked up from all over the island, mixed together and pasteurised at the factory (by law, 30% per cent of the milk must be goats milk). Enzymes are added to the cooled milk and it is then poured into plastic frames to set. The cheese is then salted and placed in tins.  Brine is added and the cheese left to mature for two months before it is sold.  Ninety five per cent of the feta from this factory is sold overseas, some of it to Australia. 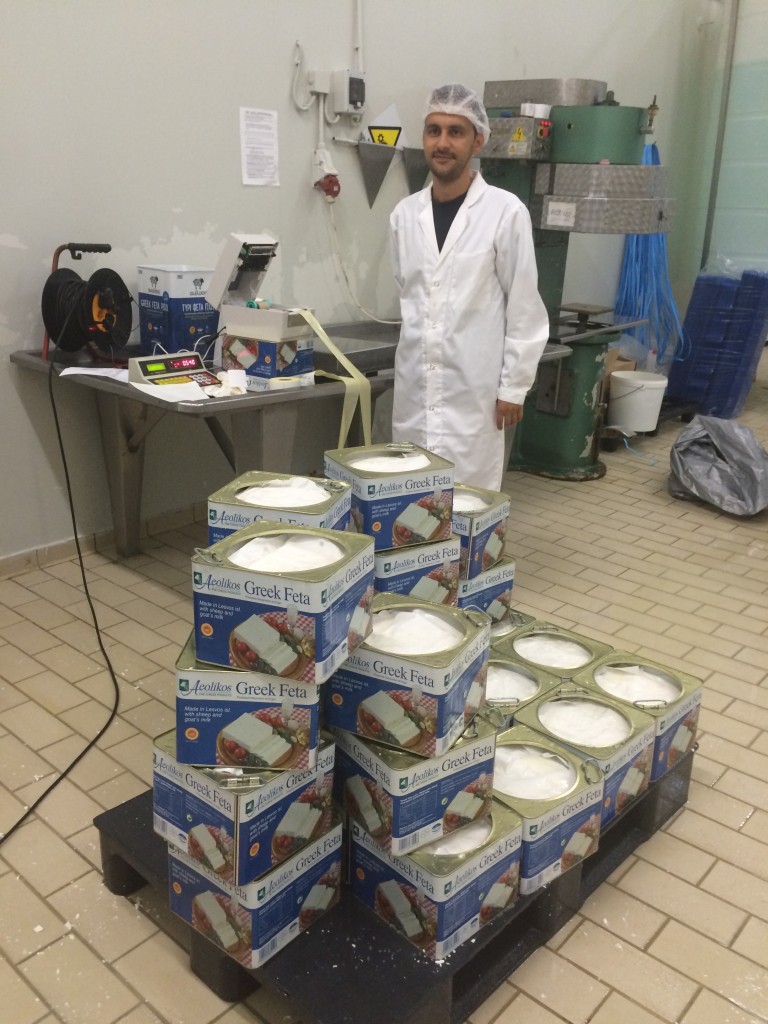 Dimitros Follos, food technologist at the Aeolikos Feta factory, Agia Paraskevi, with tins of feta about to be filled with brine and sent to Australia

During my time on Lesvos, the local people have been very hospitable and friendly and displayed little of the angst and anxiety displayed on the front pages of newspapers over the past six months- and I’ve seen only ever seen three or four people in a queue outside an ATM. 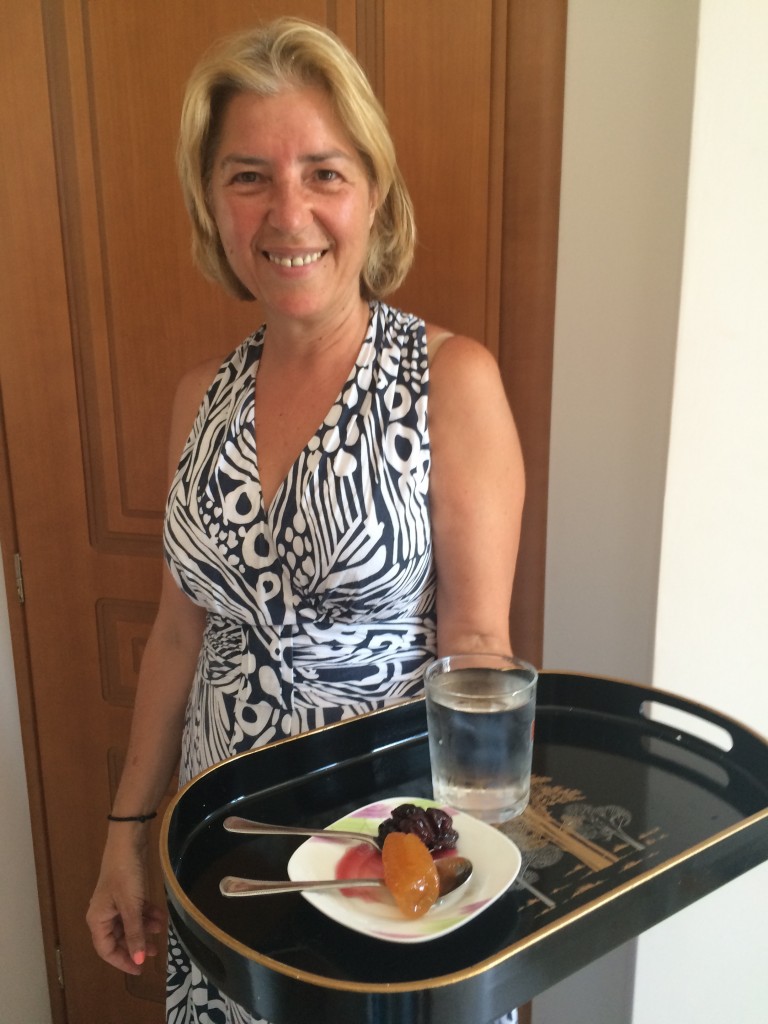 The Greeks are also far more compassionate than we are in Australia about the plight of refugees.  Hundreds of thousands of Syrian refugees, fleeing from the civil war in their country arrive daily in Greece, many of them by boat from Turkey to Lesvos.
Their boats are not turned, or tugged, away.
Their word for this is splanchnisomai, a word which embraces both compassion and mercy, something in Australia we seem to have forgotten.