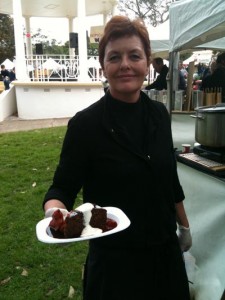 A few weeks ago, she discovered quince trees growing on the vineyard orchard at the Lowe estate at Mudgee.
“I love quinces and had no idea they were there,” she told me on Sunday at the Mudgee Wine & Food Festival at Balmoral, Sydney.
“I decided to slow-bake them and bring them with me to accompany the Orange Olive oil & Dessert Wine Cake on the menu today.”
Also on the menu was a 100-mile Tasting Plate which included a country terrine, apple paste, Gippsland Grove Olives, new season’s Cudgegong Valley Olive Oil and sourdough bread.  Main course was a Slow Cooked Lamb with Barley & Winter Vegetables, all terrific value at $10 each.
Currie is a fabulous country cook and you can taste her food on the third Saturday of each month at the Winemaker’s Table in the middle of the winery at Lowe Wines. 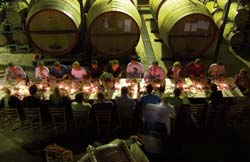 “It’s like a big dinner party,” she says. “We share good company, good food and of course, great wine.”
Winemaker David Lowe hosts the dinners and raids museum stocks to pair with Currie’s food.
“The wines may be precious, but it’s strictly off limits for the guests and host to be!” he says.
David will also host a series of Wine Schools at the forthcoming Mudgee Wine Festival which takes place in the region next month. 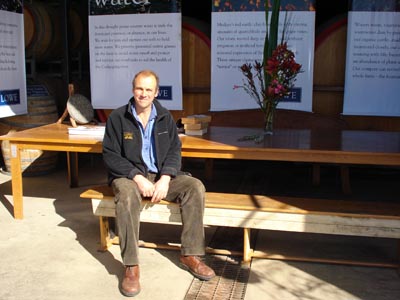 “It’s what we do at the cellar door. We teach visitors about the flavours and characteristics of wine and the terroir of Mudgee,” he says.  “There is a real interest in what we do as winemakers, so we have decided to host a few informative, yet informal wine schools.”
Some of the topics being covered include :
* the fundamentals of colour, aroma and taste, so that guests can learn to pace themselves and avoid palate fatigue;
* the terms used in wine tasting and examples of faulty wines;
* a tutorial based around tasting three varietal white wines, including Pinot Gris, Sauvignon Blanc and Chardonnay;
* a structured red wine tutorial focusing on  Cabernet Sauvignon, Pinot Noir and Shiraz.
While in Mudgee, make sure not to miss the monthly Farmers Markets, also held on the 3rdSaturday of the month on the corner of Market and Church streets in Mudgee. 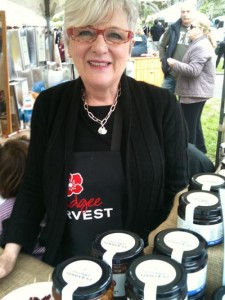 They also conduct Farm Walks on the Sunday immediately following the Farmers Market which include two farms per walk plus a coffee in between. Farms include Cooyal Grove Pistachios & Wine; Ormiston Free Range Pork; Di Lusso Wine & Figs: Top Shed Olives; Leaning Oak Cheese and Cudgegong Valley Olives.
“Not only does this give the public a chance to experience a working farm, it is a nice way for us to get in touch with the seasonality of growing produce,” says Simon Staines, President of Mudgee Fine Foods.
Tickets are $10/person or $20/family which covers either or both the farms on the day.
Staines is married to Angela Leonard, famous in the region for her Angela’s Edibles. 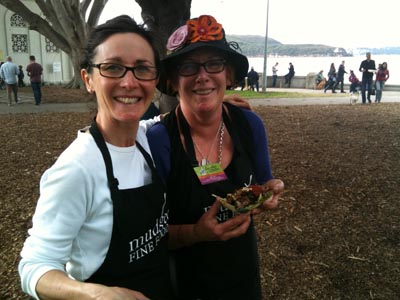 “I’m passionate about the Mudgee Valley, its seasons, its produce and the people who grow it,” says Leonard.
“I use the cumquats in my own garden or the quinces from a grove of trees growing along the Cudgegong River or SarJay’s locally grown vegetables. My aim is to capture the essence of Mudgee in a jar.”
Her Beetroot Relish is a knock-out.
In many ways, Mudgee is the condiment capital of NSW. 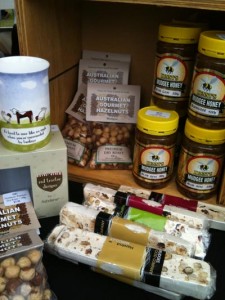 Four years ago, Diana Anderson began making a range of Mudgee Harvest jams (blackberry, blood orange, fig & ginger) and pickles with quirky names such as Chutney 4 Chook; Pickle 4 Pork and Sauce 4 Snags.
Macaron Madness has also hit Mudgee.  For the past 3 months, Tanya Scott ad Lara Hooper from Mudgee Made Catering have been selling their extraordinarily-flavoured macarons at The Farmers Markets. 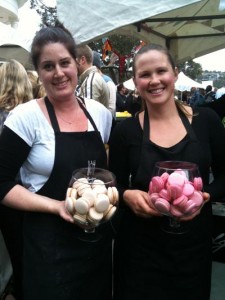 “Next month we’ll be doing a rhubarb crumble macaron,” says Scott. “We offer different  flavours each month.
September is a good month to pay a visit to this pretty region.  Not only are the buds about to burst and the days longer and warmer, but the whole month is devoted to events celebrating the wine and food of the area – and there are over 40 individual cellar door outlets to visit, many of which produce outstanding organic wines such as Botobolar and Thistle Hill.