At the Umoja Women’s Village near the entrance to the Samburu National Park, northern Kenya, the women greet us with a ceremonial song. 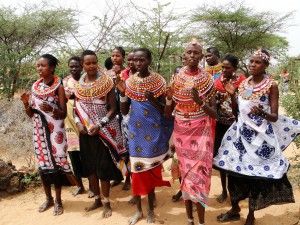 Translated from the Swahili, the words mean, “My cow is better than yours…”
It’s also sung at weddings and when boys are circumcised. Status and wealth in Samburu culture is synonymous with the amount of cattle one owns, and their traditional diet consists mostly of milk and sometimes blood from their cows.
The blood is collected by making a tiny nick in the jugular of the cow, and draining the blood into a cup. The wound is then quickly sealed with hot ash. Meat is only consumed on special occasions. The Samburu diet is also supplemented with roots, vegetables and tubers dug up and made into a soup. 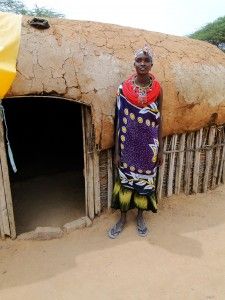 Judy, spokesperson for the women, outside a typical mud and dung house

In Samburu society the women are expected to do most of the work and are responsible for farming, cooking, cleaning, chopping wood, child care and the general running of the home.  They even build the houses (made with mud and cow dung).
At the Umoja Women’s Village, the women do everything because this is a “women only” village. 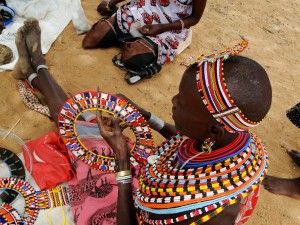 Established in 1990 by Rebecca Lolosoli, it was set up for women fleeing domestic abuse from violent husbands.  They survive by selling traditional Samburu jewellery to tourists and have set up a primary school for their children.
Quite by coincidence, we visited the village on International Women’s Day.
I was most impressed by the women I met in Kenya. They are strong, forthright, move with grace and are striking to look at.
At Loisaba Lodge, 280km west of Umoja, I was also impressed by Consolata Wangechi, chef at Loisaba Lodge in Laikipia for the past 17 years. 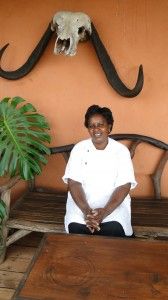 Wangechi is from the Kikuyu tribe and was born in Nyeri, central Kenya.
Unlike the Samburu women from Umoja, she has daily access to a fresh vegie garden which is cultivated near the Loisaba airstrip.
When I visited, there were plenty of leeks, spinach, eggplants, fennel, pumpkin, beetroot and carrots in the garden, plus a bountiful supply of herbs. 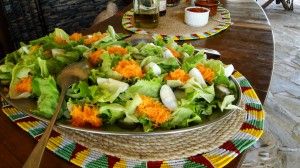 These were used in an array of colourful salads which were served from a buffet near the pool for lunch one day. 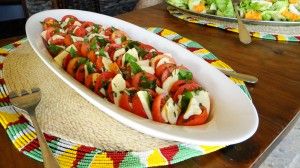 Her Caprese Salad and Pumpkin & Lentil Salads were also well presented, fresh and tantalising.
The ginger spice biscuits served for afternoon tea and early in the morning before we went out for our dawn game were crispy and more-ish. 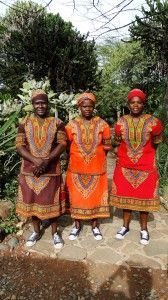 And the colourful costumes and smiling female staff at the Lodge were a delight.

I travelled to Kenya as a guest of the Kenya Tourist Board: www.magicalkenya.com