It’s 8am and I’m sitting at an outdoor table in front of the Short Order Local food truck on Town Beach, Exmouth, near the tip of the North West Cape in Western Australia.
The sun is shining and a warm breeze is blowing in from the Gulf, tossing the palm fronds around and messing with my hair. An upbeat tune is playing in the background and I can’t help but tap my foot to it. 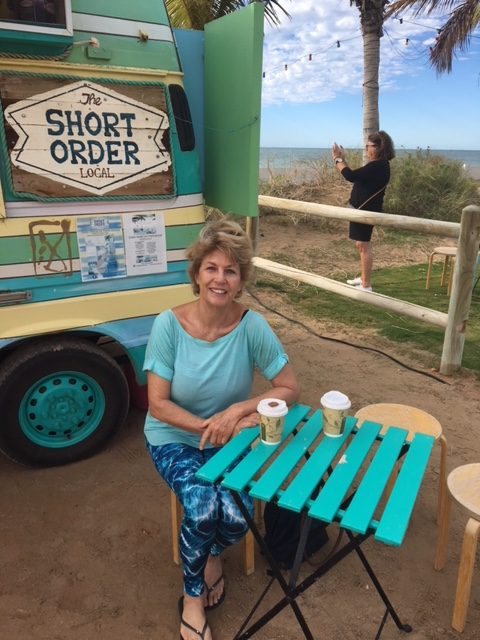 It’s the 1975 hit song by The Spinners Games People Play.
The music is so buoyant I feel like dancing. I’m lucky to be here on such a glorious morning.  It’s been wet, cool and windy around the Cape for the past few days, conditions which mean the tour operators in charge of the boats taking people out to see the whale sharks on Ningaloo Reef have cancelled a number of trips.
The food truck has also been closed for a fews days due to the adverse weather.
But today I’m happily sipping on my coffee and munching on a warm cheese toastie knowing that very soon I’ll be joining the tour with Live Ningaloo, one of the newer operators offering bespoke tours for just 10 people. True, it’s the most expensive of the tours but means fewer people clambering in and out of the boat and more viewing time with the whale sharks. 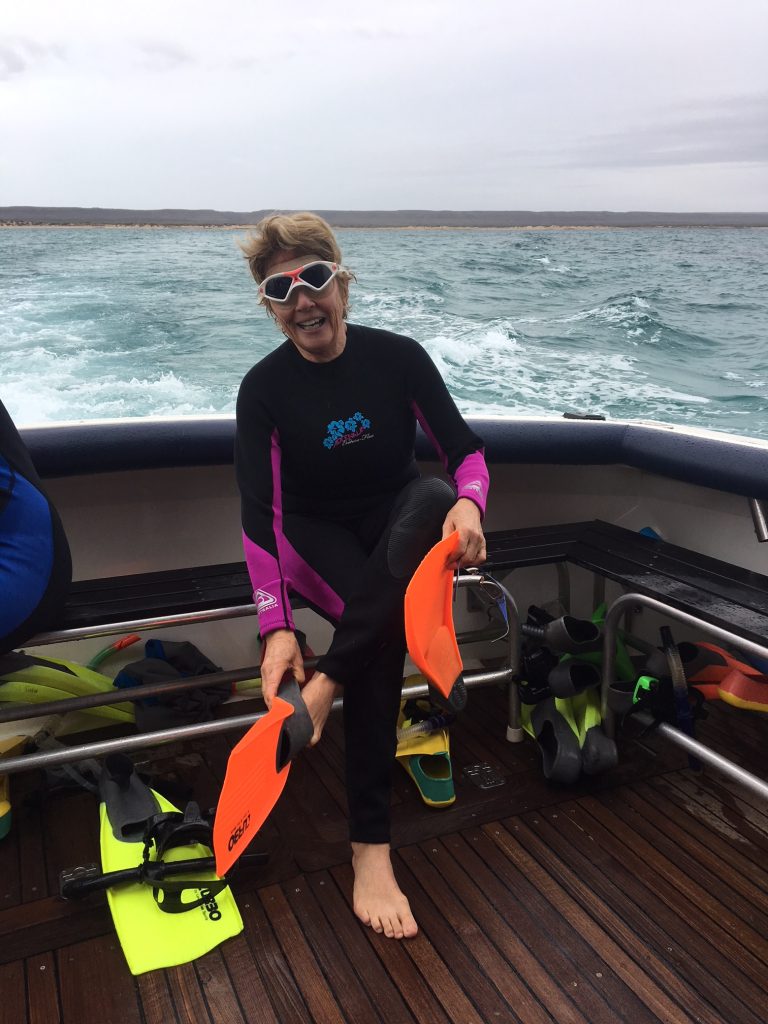 I’d wanted to swim with these gigantic fish ever since seeing a documentary about them on TV a few years ago. The sight of their long grey bodies dotted with white spots and stripes (reminiscent of an Aboriginal painting) cruising along near the surface of the deep blue ocean astounded me.
I was even more gobsmacked when I saw a number of people in wetsuits swimming alongside and vigorously kicking with colourful fins. It was top of my bucket list so you can imagine my disappointment when the first few days were wet, cold and windy. Windy conditions are the worst as it’s dangerous for swimmers to get in and out of the boats – and to be stable onboard – when the sea is choppy. 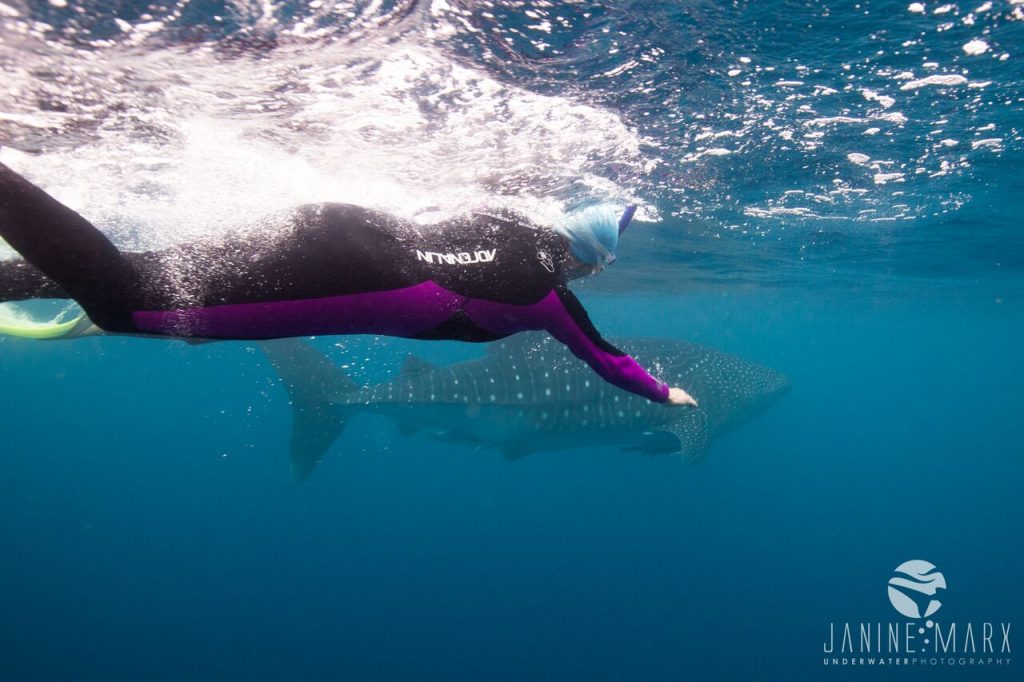 Here I am actually swimming alongside the whale shark: hallelujah!

On my first day I went into the little town of Exmouth (population approx 2000) and ducked in and out of various shopfronts trying to make a decision about which operator to go with. My friends weren’t due to arrive until late in the day and I hoped to provide them with a few choices.
Many offer snorkelling and kayaking tours plus coral viewing from glass bottom boats, but we wanted to swim alongside the whale sharks which meant going out beyond the lagoon. After consulting with my friends, we ended up visiting the lovely Sonia who runs Live Ningaloo with her partner Murray from their home in Nimitz Street, just outside the township.
Exmouth reminded me of a laid-back frontier town, full of 4-wheel drives with trailers, shops selling fishing and diving gear and people wandering around in thongs and hippy clothes, not unlike some far north Queensland towns. 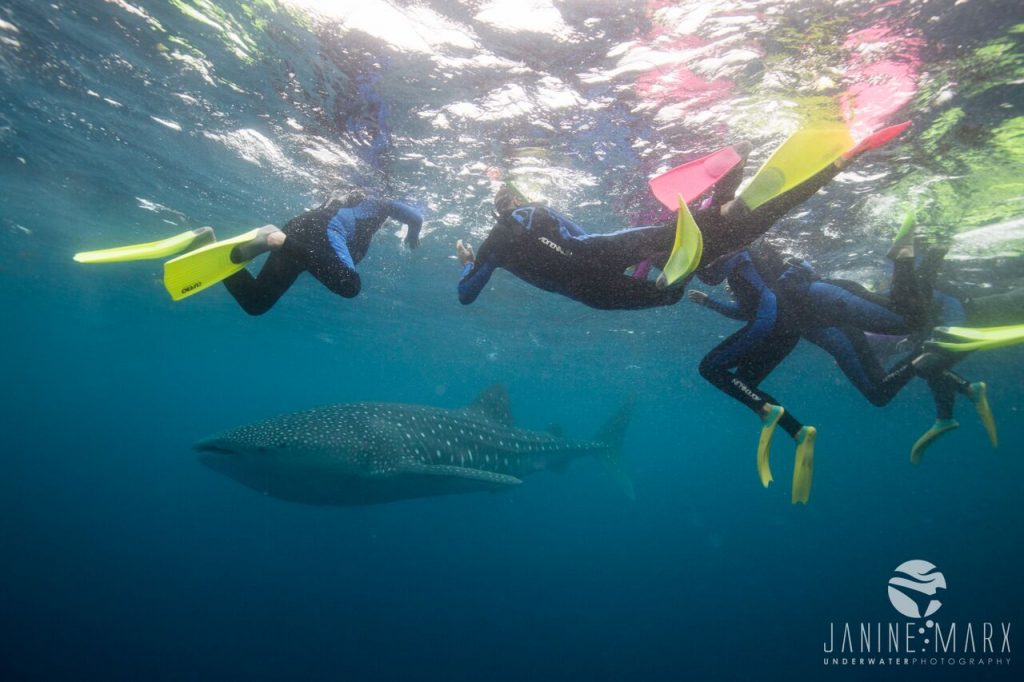 Our group of ten kicking colourful flippers to keep up with the whale shark –  operators provide wetsuits, snorkels and goggle so no need to bring them with you

When you know that one of Australia’s greatest writers Tim Winton and his wife Denise, a marine scientist, are actively involved with the Cape Conservation Group (CCG), and that Tim has donated prize money from a recent literature award to help launch a campaign to protect the area, called Protect Ningaloo, you realise how passionate the locals are about protecting and preserving the extraordinary ecosystems of the Ningaloo Reef, Cape Range and Exmouth Gulf.
I was lucky to stumble across a meeting of the CCG, chaired by Denise Winton, one night at the Social Society, a hip community-minded vegetarian cafe run by Anne Roessler. 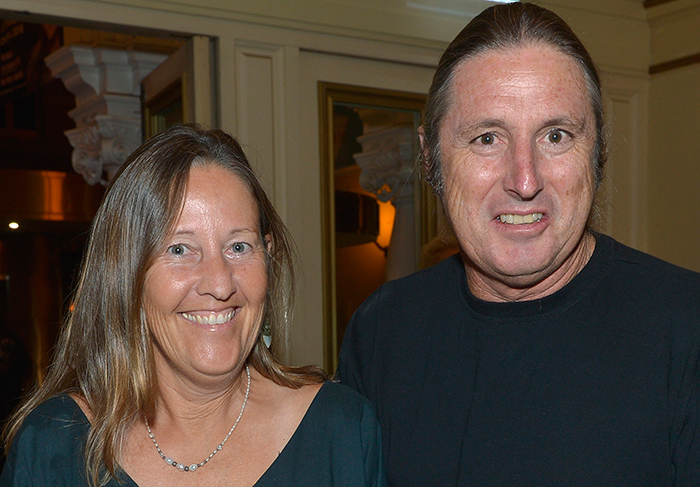 Issues discussed included checking on Woodside’s gas pipes in the Gulf, BHP’s proposal for an “artificial reef” using a decommissioned oil rig, commercial aquarium companies poaching more than their share of tropical fish and activists collecting plastic debris and rubbish from one of the local surf beaches. The atmosphere was convivial though it was clear they all felt strongly about the issues discussed. Denise mentioned that she attends the local fortnightly markets as “the face of CCG” and talks to people about the issues to help spread the word. 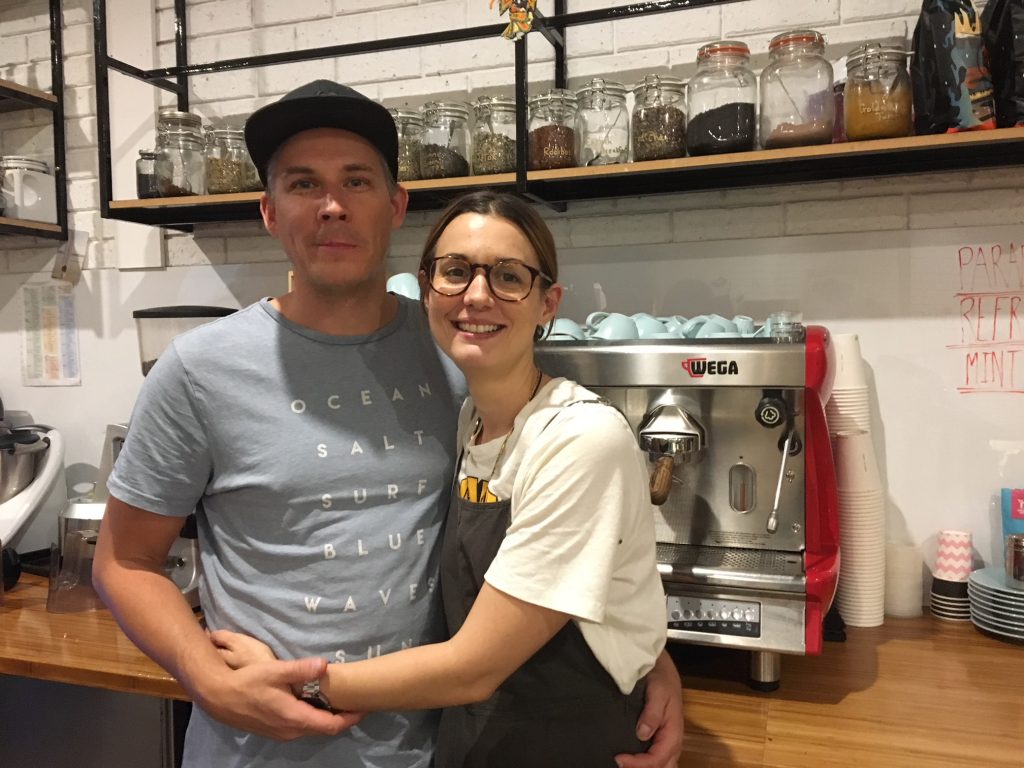 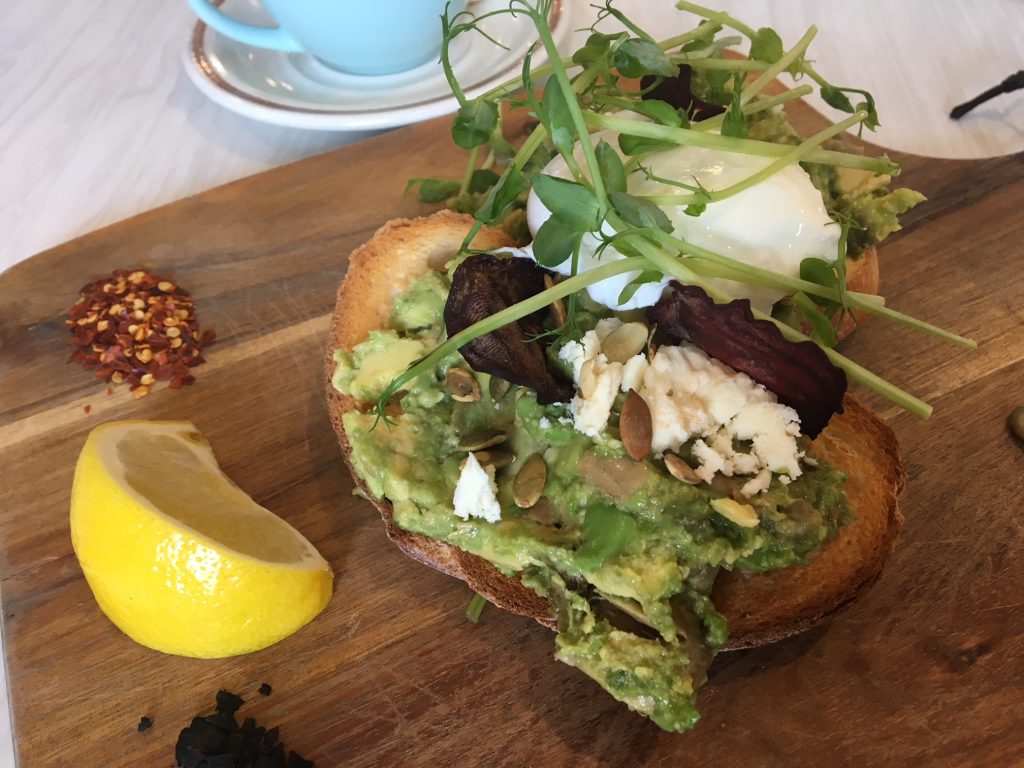 Iced matcha, iced chai, activated charcoal latte and hot beetroot chocolate are some of the drinks. The coffee, cold press juices and home-made cakes are excellent. 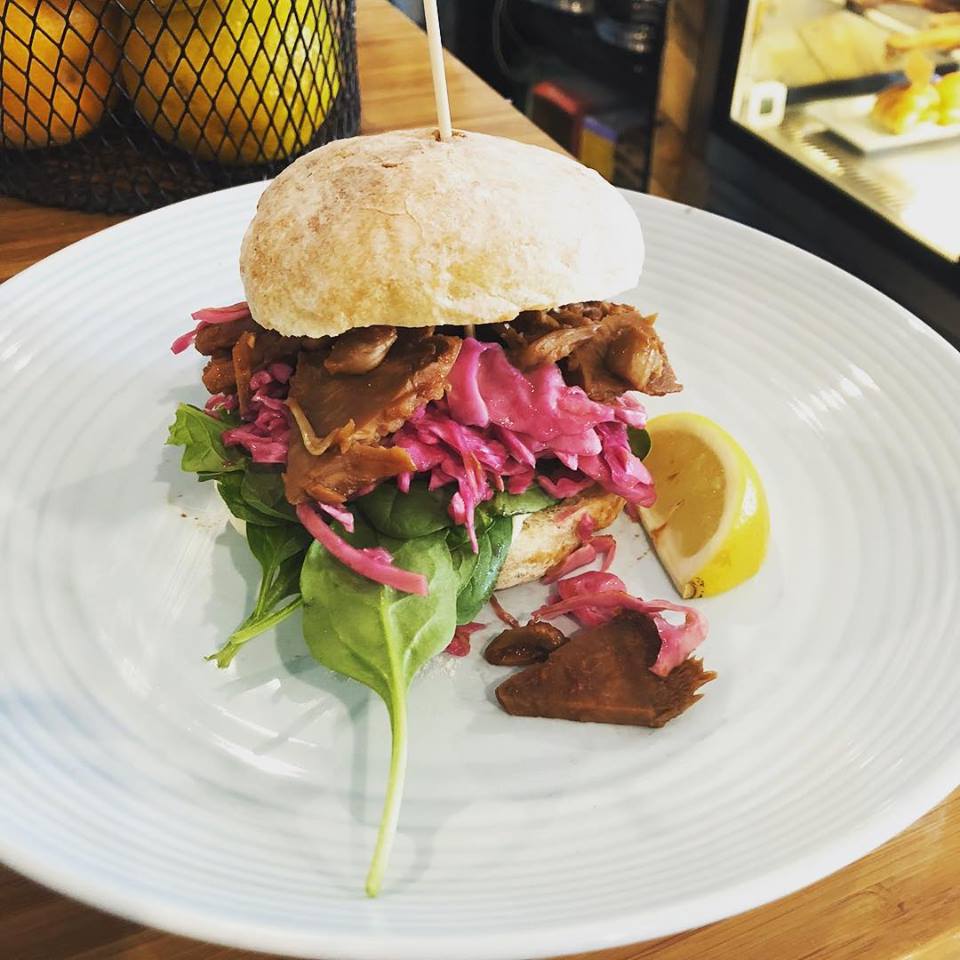 The day I visited a BBQ Jackfruit Burger was on the Specials Board, definitely a new taste sensation for me.
Originally from a small town near Heidelberg in Germany (and a family involved in hospitality) Anne loves the endless summer lifestyle of Exmouth.  She and Kai had intended staying for a year, but 8 years later are still here, cleverly tapping into the vegan-vegetarian zeitgeist of this remote part of Australia.
Impressed as I was by their enterprising venture, the most thrilling experience for me  was actually swimming alongside the very first whale shark we encountered. My heart was throbbing, not just from swimming furiously to keep up, but from the sheer thrill of swimming alongside such a magnificent, elegant creature. There were another five whale sharks spotted that day. Somehow, when I jumped in to swim with the last one, I didn’t kick fast enough to swim alongside him and almost drifted straight into his mouth.
Despite the fact they are filter feeders, the sight of such a large wide smiling mouth right in front of me did cause my heart to miss a beat or two. 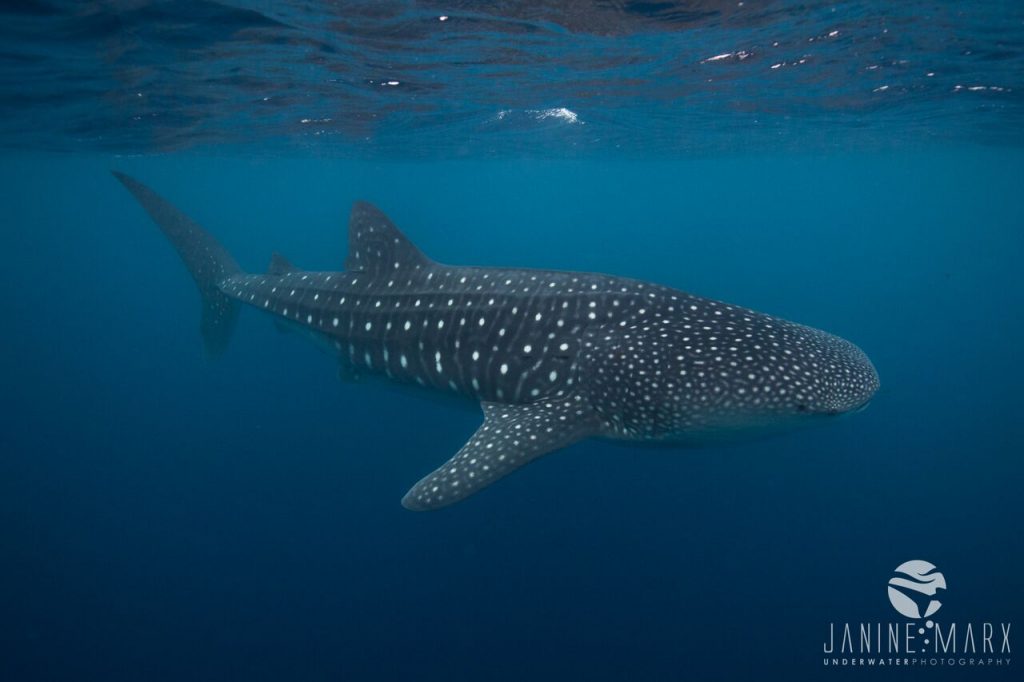 One of the whale sharks we saw on our trip with “Live Ningaloo” – most are young males who come to feed (not breed) between March-August annually. Whale sharks range in size from 3m -12m in length, average size is 5m

“Snorkel drifting” along Turquoise Bay past clumps of coral and multi-coloured fish on a day when the sun was out came second. I loved the tiny iridescent blue fish flitting around the coral and was taken aback when one of the colourfully-striped fish kept turning around and rushing at me: was he trying to shoo me out of the water?
I also got quite a fright when I stepped into the clear turquoise water and almost stood on a sandy-coloured Shovel Nose Ray or giant guitarfish (Glaucostegus typus). Like me, he got a terrible fright, and whooshed rapidly away, flapping his wings and tail. 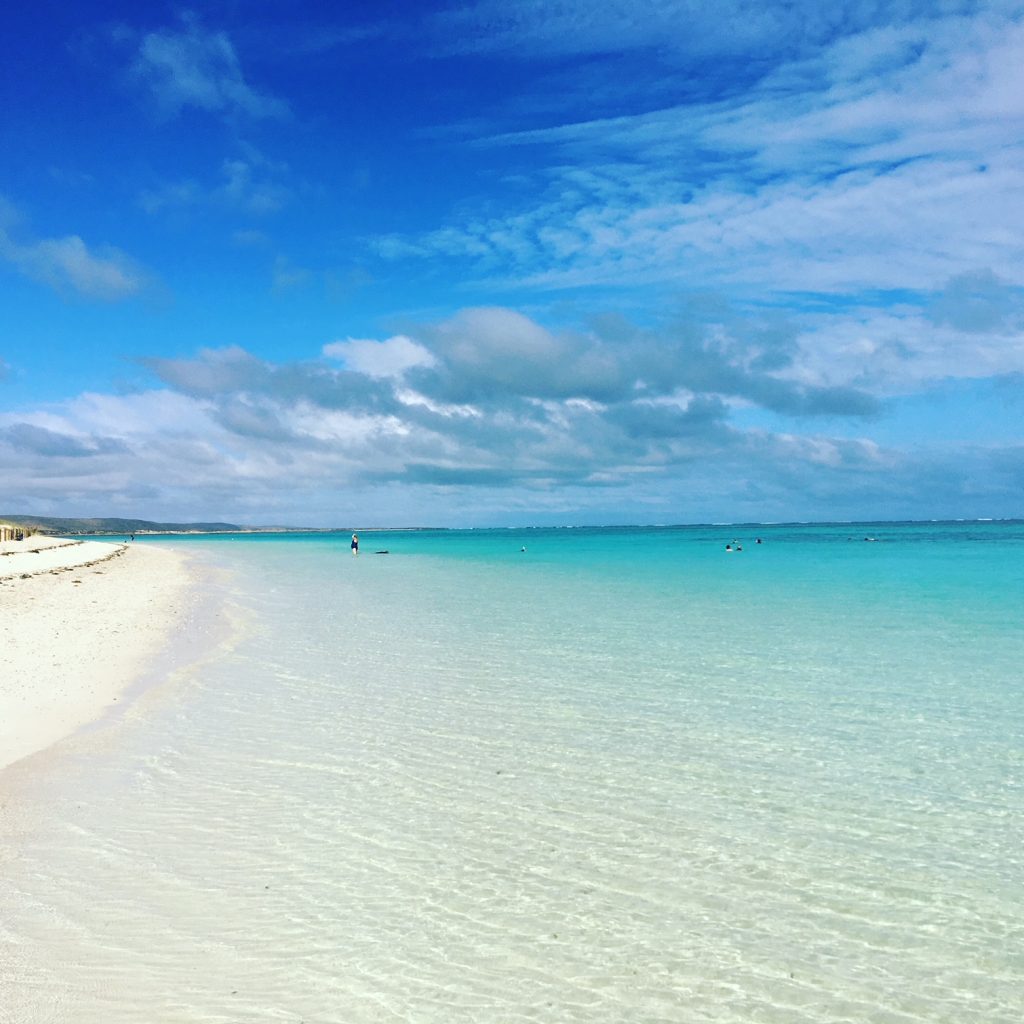 Heavenly Turquoise Bay where you can snorkel drift at high tide

On the way back from Turquoise Bay, we spotted a couple of rock wallabies grazing in the scrub and had to slow down to allow an echidna to cross the road.
And on my last day, traffic was held up en route to the airport by a large emu leisurely crossing the road. 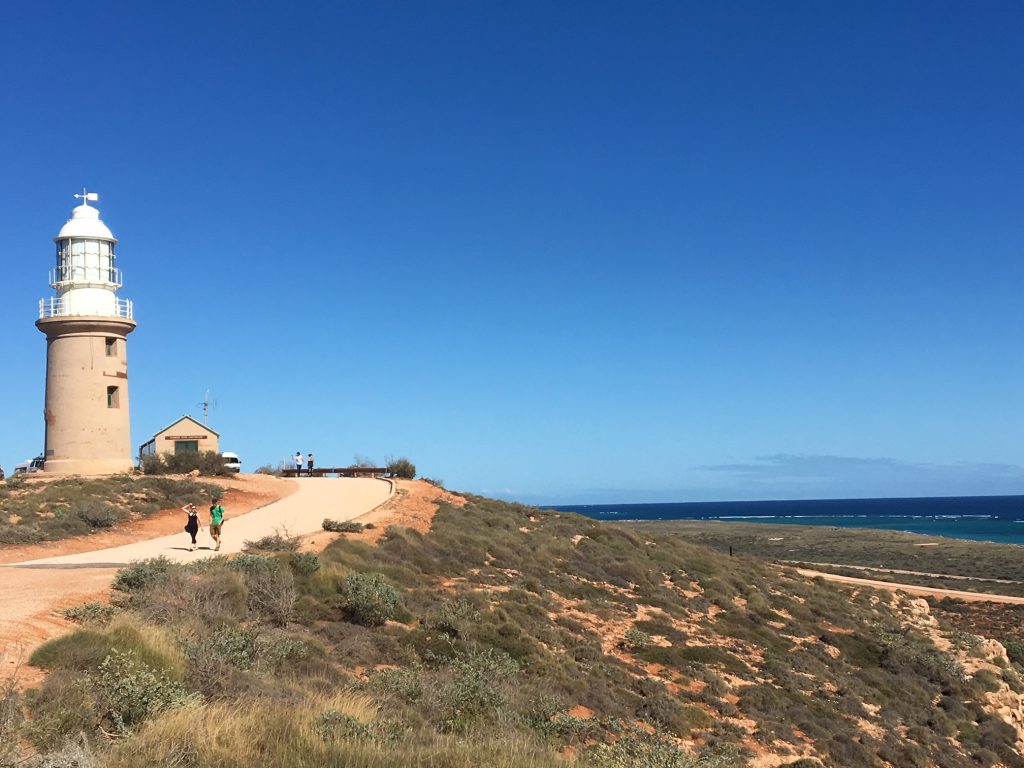 As Tim Winton says on one of the plaques near Vlamingh Head Lighthouse on the northernmost tip of the Cape Range:

What’s there now is a rugged and beautiful wilderness. People come from all over the world to see it. After all, how many places can you go to where you can swim with a whale shark, a placid animal the size of a bus covered in brilliant dots like an Aboriginal painting. The same day you can be circled by manta rays that roll and swerve like enormous underwater birds. If you’re lucky you’ll see a dugong, the shy and vulnerable creature of the seagrass meadows.
There’d be turtles. of course. I’ve seen them hatch and waddle down to the water with sky pink as the desert beyond. There’ll be more coral than you’ve ever seen in your life. If you’re keen enough you can see the coral spawn like a tropical blizzard.  As you can see, I love the place. It has been left to us to experience, to look after, to pass on to our children and their children.
– Tim Winton 2002

2 Responses to Ningaloo Reef: Swimming with the Whale Sharks