It’s a hot, still morning when we set off to the little white church tucked in amongst the olive groves down the hill from the village.
We turn off the bitumen road and onto a narrow dusty track bordered on both sides by gnarled olive trees, but it’s not easy to find.  The only indication of its location is a row of cars parked along one side of the track, so we pull up and walk the rest of the way. 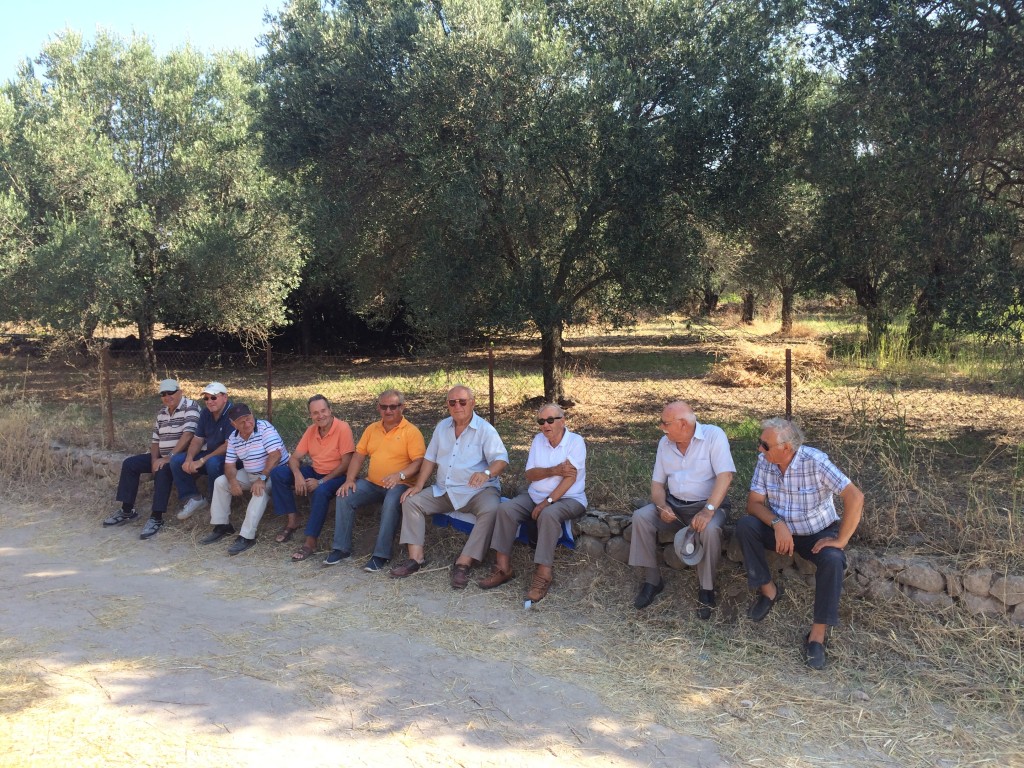 The sound of voices singing above the roar of the cicadas tells us we’re close, and when we spot the men sitting along the stone fence, we know we’ve made it.
In the Greek Orthodox church, August 6th is Christ’s name day and this little XO Ecclesia (outside of the village), dedicated to Christ, is just a few kilometres down the hill from Agia Paraskevi, an historic village hidden amongst hills in the heart of of Lesvos, an island  in north -west Greece.
I’ve tagged along with Australian Greek friends from Sydney, who have come to take communion, and to break their fast, on this special day. 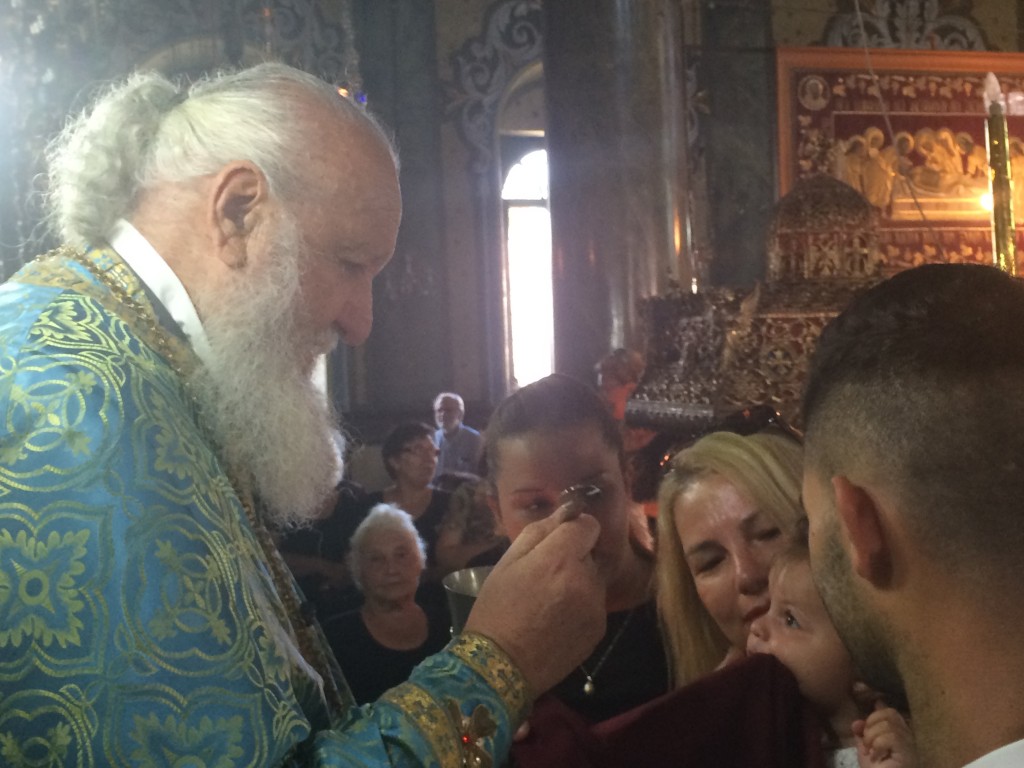 Evi’s grand-daughter, Stephanie, about to take communion at Taxiarchis church in Agia Paraskevi

One is here with her baby daughter, Stephanie, for her third communion.  Stephanie’s previous two communion services, both of which I attended, were held in the large local Taxiarchis Church and the second one at the magnificent Taxiarchis monastery at Mantamados. 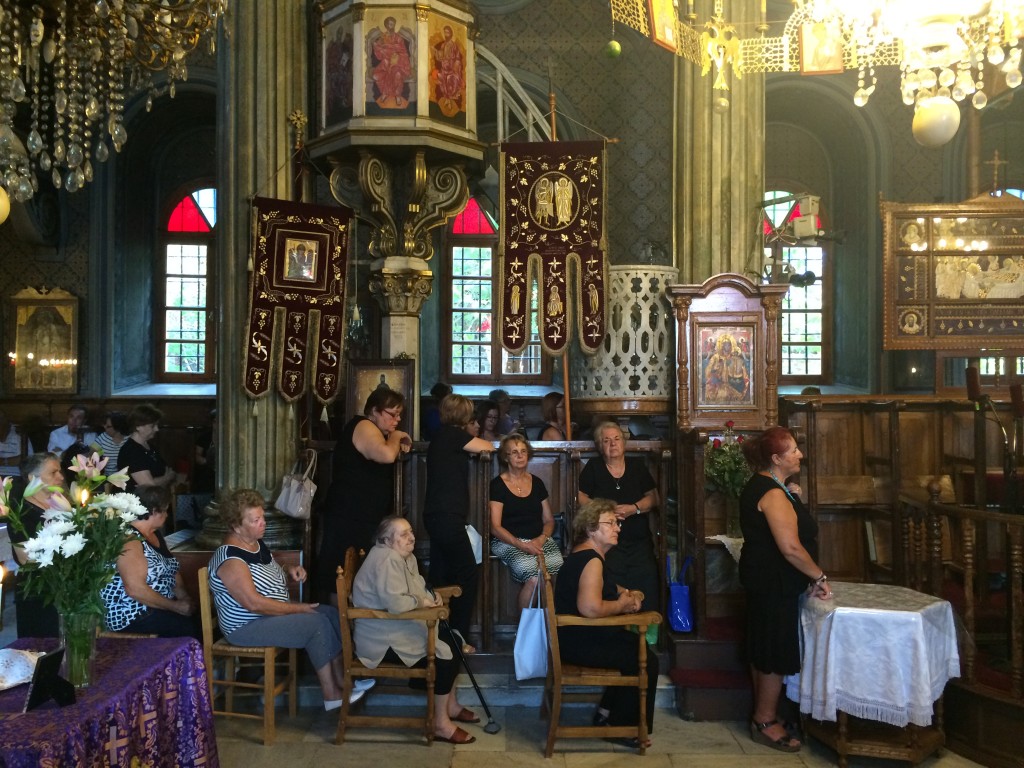 Taxiarchis Monastery, Mantamados, in the north of Lesvos. Taxiarchis is the patron saint and guardian angel of Lesvos.

Towards the end of the service, baskets of bread, blessed by Papa Yannis are passed around, followed by small bunches of red and green grapes, and a fragrant, moist Nine Ingredients cake, freshly baked by one of the local women.
Many of those present come from far away. In fact, the population of Agia Paraskevi which is approximately 3000 during the winter, doubles during the summer for a period of almost five months. Many are from Australia, others from the United States.
Some, like my friend Evi Mitchell (who runs C’Aphrodite cafe in Cremorne, Sydney) were born in the village and return in summer for holidays, others have parents and relatives living in the village. 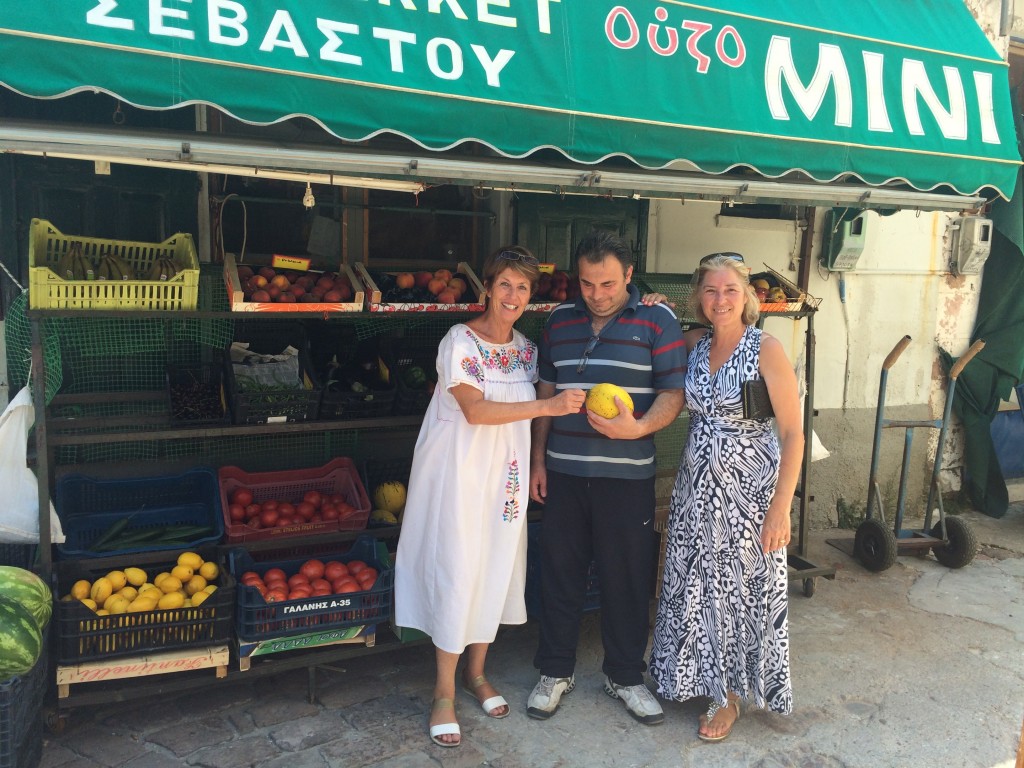 With Evi (who runs C’Aphrodite in Cremorne, Sydney) and Nick (who used to work at Woolworths, Neutral Bay)

Having been here now for just over a week, I am struck by a very strong sense of community, with people frequently greeting each other from across the street, or stopping in their cars to say hello.
Some call out from their rooftops, others sit outside their houses on kitchen chairs, chatting, playing cards, drinking coffee and watching others walk by. It’s the best place to be when one of the market vendors passes by selling either seafood, summer stone fruits, vegetables, shoes and clothes from the back of his Ute.
Neighbours drop by with boxes of home-made Greek walnut and almond biscuits, jars of spoon sweets, ceramic bowls of freshly made sheep’s milk yoghurt or fresh eggs, liberally sprinkled with the latest village gossip. Some  drop in with recipes at midnight.
On my very first morning, I’d only just left the 200 year old farmhouse where I was staying and turned the corner to walk down the main street when an elderly man called out to me, asking where I was from.
After a bit of a chat, he told me was Steve from Melbourne and was heading off to make a phone call to his wife. He offered me a lift and suggested I have something to eat at Oasis, a popular local cafe, and then visit the Olive Oil Museum. 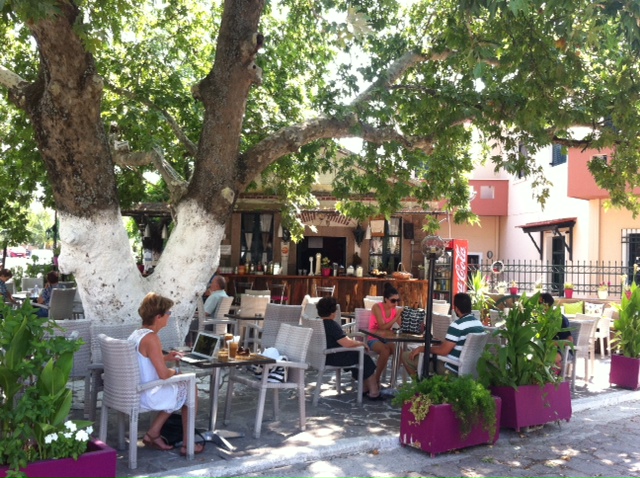 Under the leafy oak tree at Oasis Cafe in Agia Paraskevi

I was grateful for his advice as I’d arrived the night before from Mytilene airport, 40km  from the village, and Evi was with her family on Rhodes.
As he ambled down the cobbled main street, he told me he’d been born here and visits every summer for two months while his wife stays behind with the kids and grand-children in Melbourne. He calls her every day from the public phone (6 Euros for unlimited time).
He’s just one of many I’ve met this week who live abroad but have never forgotten their birthplace and take an active interest in all that happens here. Over the decades, they’ve sent money back home, contributing to the building of the Community Olive Press, the magnificent neo-classical school in the middle of the main street and the Senior Citizens home. 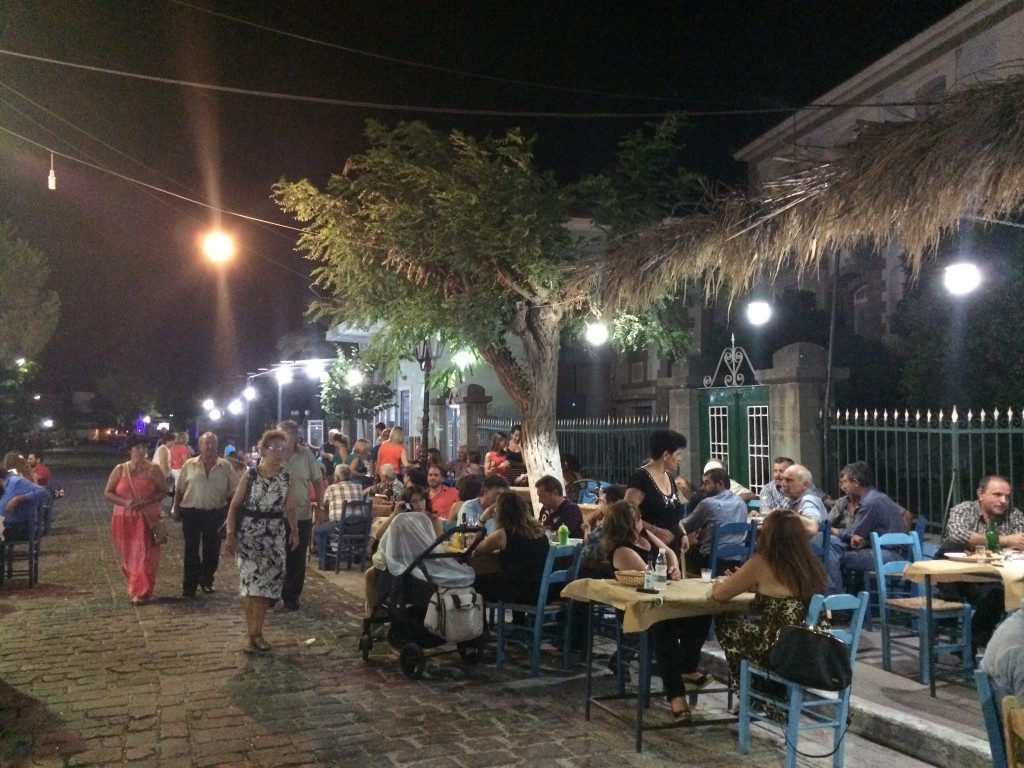 The town really comes alive around 10pm in summer

The hub of the town centres around the main street which comes alive at night around 10pm. Lined with leafy plane trees, attractive neo-classical houses, tavernas, bars and cafeneions, it is closed to traffic at night in August and becomes a pedestrian mall.
People sit outside, enjoying the warm night air, eating mezethes (little plates of dips, grilled seafood or meat, vegetables and Greek salad) accompanied by ouzo or beer while others sip on cups of strong Greek coffee and indulge in sweet treats. 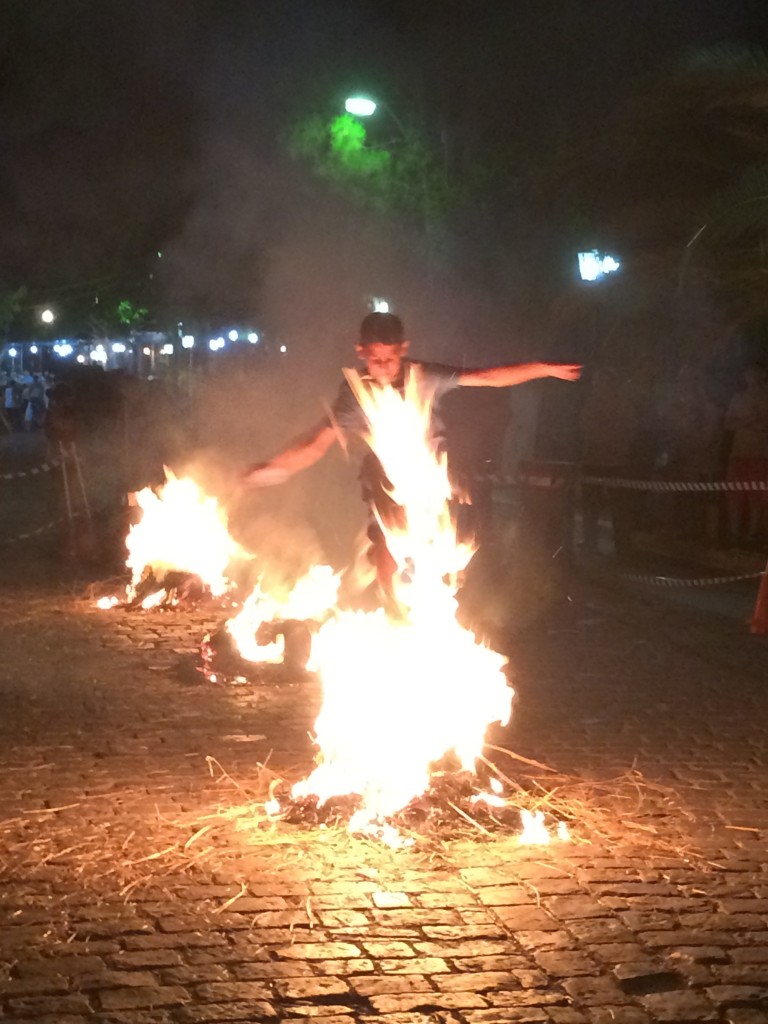 One night we witnessed a series of bonfires set up in the main street.  These had been lit on St John’s night (which happened to coincide with a full moon this year) to burn off  bugs and bacteria from the wreaths made in May and to clear the air of bad spirits in preparation for winter. Local children competed with each other in jumping over the fires, something that would never be allowed in ‘politically correct’ Australia.
A couple of weeks previously, the Festival of the Bull, in honour of Agios Haralambos had been celebrated with much fanfare. It revolves around ancient customs such as the slaughter of a flower-wreathed bull, horse races on decorated horses, purificaitons, rituals and traditional dances directly connected with Greek traditions of Asia Minor and lasts three days, attracting thousands of visitors. Dating from 1774, it is of great folkloric interest and is believed to be very ancient in origin. 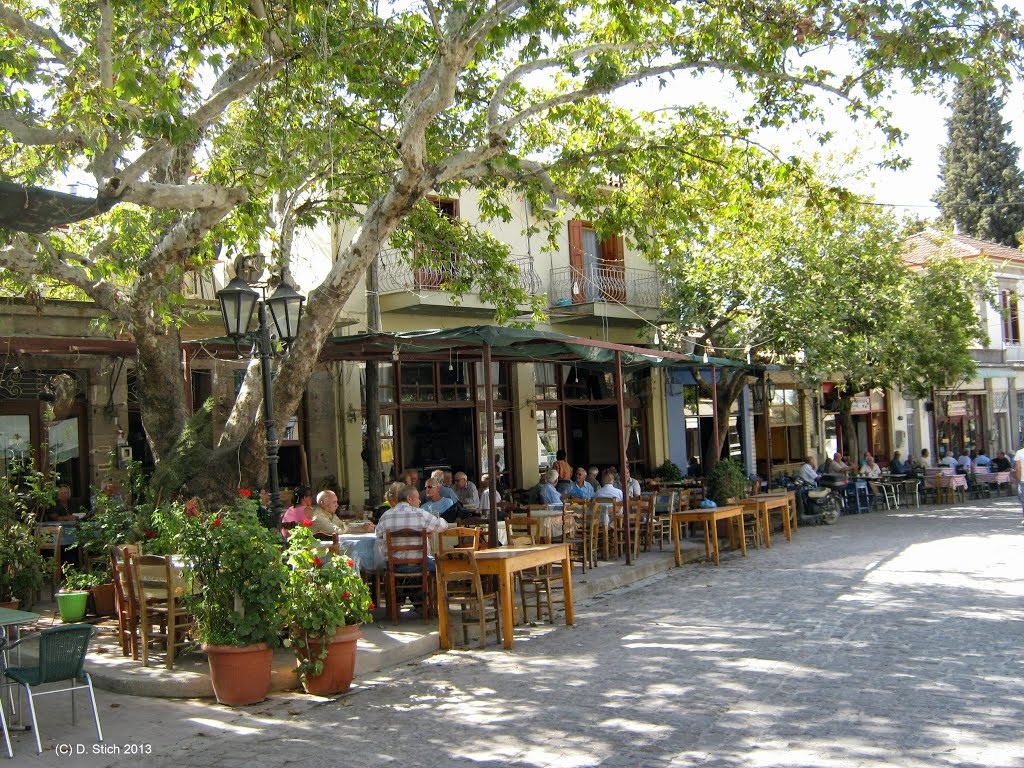 Leafy main street of the village of Agia Paraskevi, in the heart of Lesvos

I’ve been aware of this little village of Agia Paraskevi for decades thanks to Evi (and to her sister Meropi and mother Katina), but it’s only now I’m actually here that I can appreciate what she gave up to move to Australia: a vibrant community life; a set of rituals revolving around the Greek Orthodox church; a history stretching back thousands of years (which includes the poems of the legendary female poet Sappho); and a strong connection to the land and to the Aegean Sea which surrounds the island. 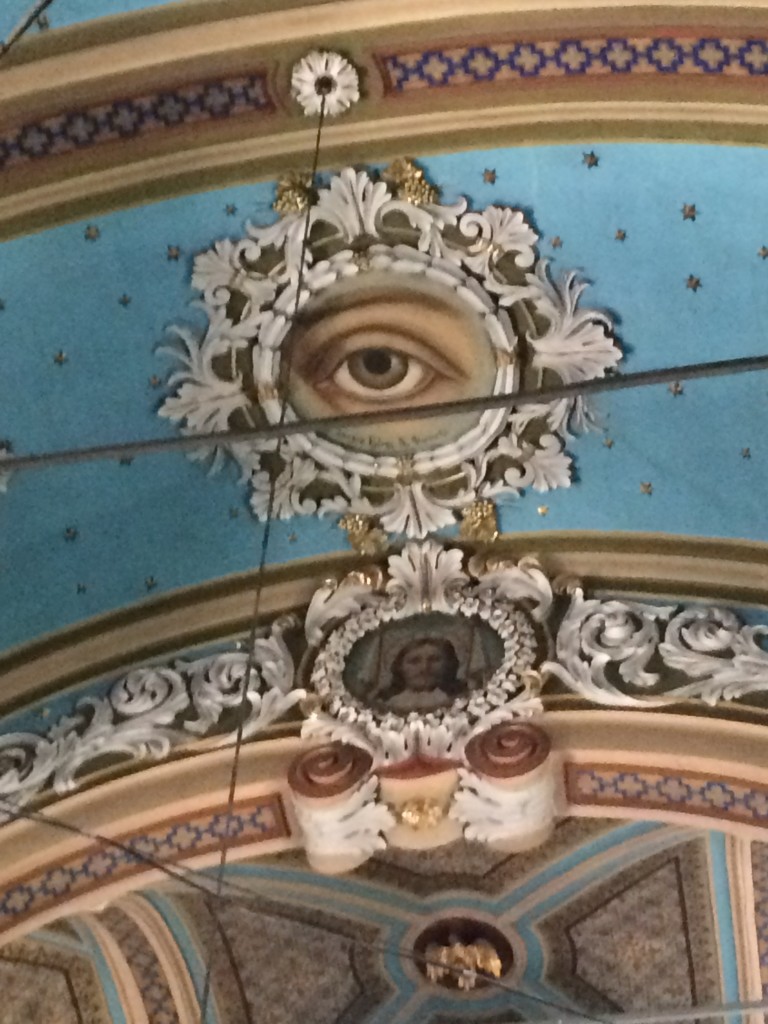 In Greek, Agia Peraskevi means Saint Friday, the saint who looks after your eyesight.
She’s clearly been keeping an eye on Evi (and her mother and sister) Down Under.