Do you know the tomato is the apple of love?  Well that’s how it was known until the 20th century. 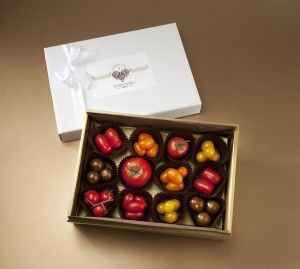 Our Latin forebears, it seems, were more romantic than us.
Or Maybe not.  Perhaps they were just confused.
When you read about the tomato’s history, you do wonder what love had to do with it.
Some blame the Spanish for the confusion, others the French, still others the Italians.
It’s certainly a colourful story, full of misunderstandings and twists and turns and ultimately, of course, of huge success.
Where indeed would we be today without the tomato?
When first introduced to Europe from Central America in the 16th century, the poor old tomato was treated with much disdain.  Being a member of the deadly nightshade family, it was considered poisonous.
The Spanish, who called it manzana or apple, considered it a garden ornament. The story goes that it was discovered there by an Italian chef who took it to Florence and flavoured a sauce with it for the Borgia family.  The Italians first called it pomodoro or golden apple because all the early varieties were yellow. 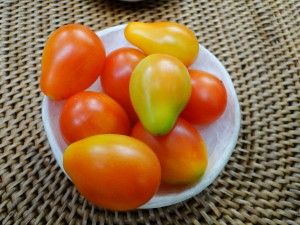 Then to emphasise its Spanish connection, they called it pomo d’Moro or Moor’s apple which is where the French come in. A visiting dignitary from France seems to have misunderstood the name and returned to his native land calling it pomme d’amour or apple of love.
Mind you, the confusion is understandable when you know that tomatoes were also thought to be potent aphrodisiacs.  Perhaps the vast quantities of tomatoes consumed by Italians today helps to explain their amorous reputation? 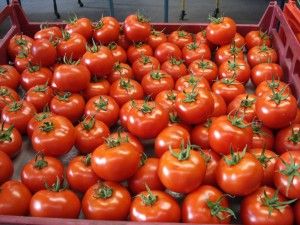 Or perhaps it has something to do with the ancient Roman feast of Lupercalia.  One of the customs of this festival was for the names of young men and women to be shaken in a lox and then drawn in lottery fashion to choose token sweethearts.
In 271AD, Bishop Valentine of Rome was martyred on the eve of his feast, which thereafter became known as St Valentine’s Day.
Over the centuries the day became more and more imbued with Anglo Saxon sentiment.
By the 19thcentury, valentines of all shapes and sizes were being sent to sweethearts.  Many of these were handmade. 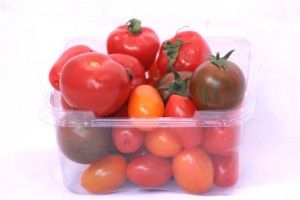 In 1888, one appeared in the form of a large red tomato.  Written on it in embossed gold letters were the words Love Apple and in the centre was the picture of an angelic young girl surrounded by a wreath.
Maybe tomatoes and love do go together , after all?
Some, indeed, even look like bleeding hearts! 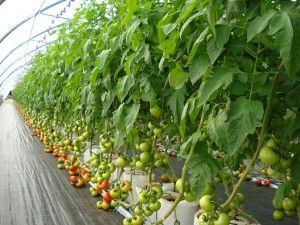