It’s easy to see why Samoans call the coconut tree “the tree of life”. 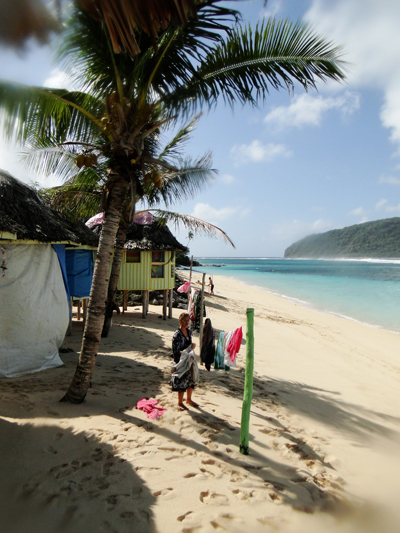 Not only do these graceful trees dot the coastlines of the white-fringed islands of Samoa, swaying gently in the warm breezes and lending shade, they’re also an invaluable supply of food, fuel and housing for the Samoan people.
On my recent trip to Samoa, I was astonished to discover just how versatile this tree is. Every part of the tree is used, including the roots which are used for medicinal purposes.
Coconut shells are used as fuel for fire and also as enclosures for food and liquid. 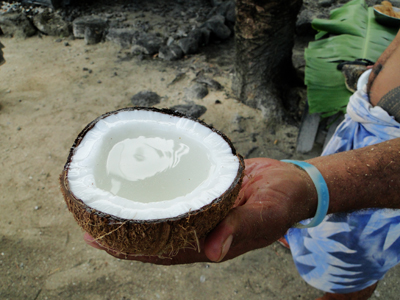 Coconut palm fronds and fibre are use in the construction of their traditional oval-shaped houses (fale – pronounced “far-lay”). On our very first night, we stayed in a fale constructed on sand close to the water. Wooden posts held up the roof. There were no walls, though we were protected by “pola”, similar in style to Roman blinds, but made from woven palm fronds. 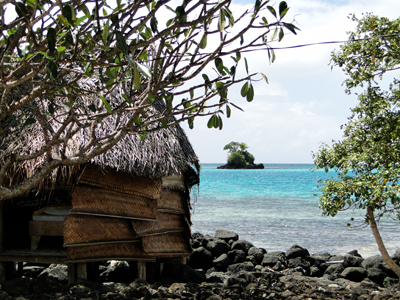 Traditional fale are tied together with rope made from dried coconut fibre, soaked first in water to improve their quality.
But it’s the extensive use of coconut in their cooking which most astonished me.  At a cooking demonstration held at the Orator Hotel in Apia, the capital of  Samoa, I tasted a variety of dishes in which coconut featured. 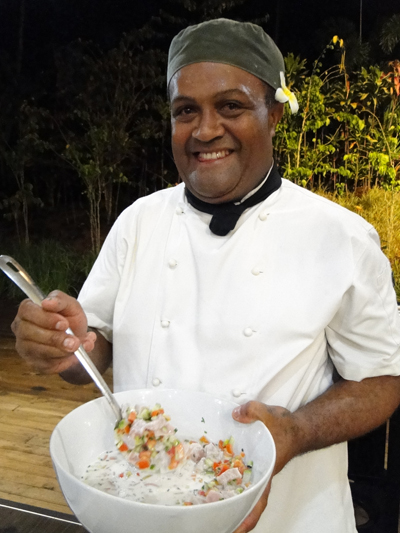 “Coconut cream, coconut cream, coconut cream,” chanted chef Kosa Toroca, with a twinkle in his eye.
“Our ancestors ate coconut cream with their seafood and vegetables, but it was the only fat in their daily diet.
“It’s the introduced foods which the missionaries brought with them in the 19th century which ruined our diet.
“The seas around the Samoan islands are rich in seafood and one of the most traditional dishes is Oka, similar to the Tahitian ceviche, in which fresh fish is marinated in lime or lemon juice then combined with fresh coconut cream and diced tomato, cucumbers and green onions. The key word is fresh i.e. not tinned. 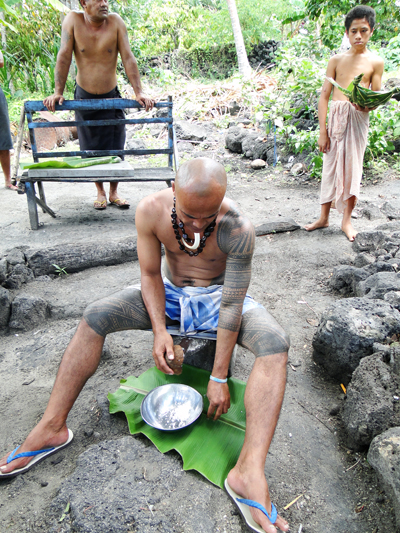 “Lu’au or Palusami is probably the dish we are most famous for,” says Toroca. “It’s made with coconut cream and taro then wrapped in whole taro leaves and served on slices of cooked taro root. Ideally it’s cooked in an umu,  a buried oven in which the food is cooked on hot volcanic river rocks.”
“All our desserts are made with coconut cream which is often caramelised with brown sugar. We even serve it with baked pawpaw at the end of a meal.”
Taro, yam, breadfruit are major staples; pawpaw, bananas, mangoes and starfruit are plentiful and grown in backyards; reef fish such as snapper and deep-sea fish such as yellowfin tuna, mahi mahi (masi masi in Samoan), swordfish and wahu abound in the sea. 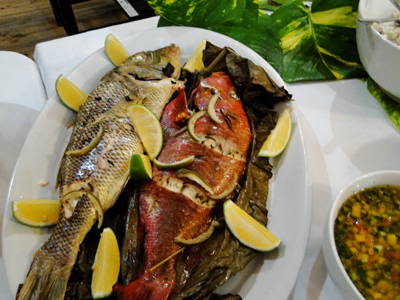 At Orator, owners Jerry and Charlotte Chan Mow-Brunt encourage Toroca to use as much local produce as possible.  His signature dish is a Sea Grape Salad made with sea grapes (from seaweed), finely sliced red onion, cucumber, tomato and coconut cream.  No salt is required as the crunchy sea grapes are salty enough. 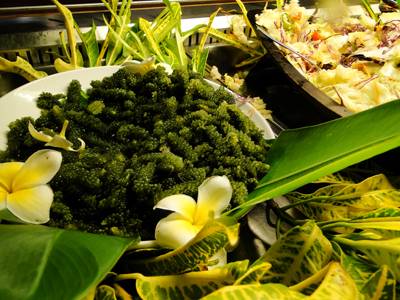 Sea Grapes served as part of the buffet at Aggie's Gueshouse

Other dishes he’s developed include a delicious spinach (using local spinach) and coconut cream soup; hash browns made with grated bananas and taro; and mashed taro, using a taro similar in texture to potato, with coconut cream.
The reef fish we tasted, which were wrapped in breadfruit and banana leaves then barbecued, were succulent and flavourful.
It’s wonderful to see Samoan chefs beginning to refine and develop their cuisine and Toroca is leading the pack. 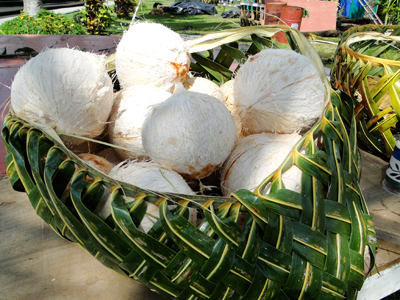 2 Responses to The Tree of Life, Samoan-style