Whenever I hold a Mini Chef cooking class with chocolate truffles on the menu, there’s an avalanche of bookings. 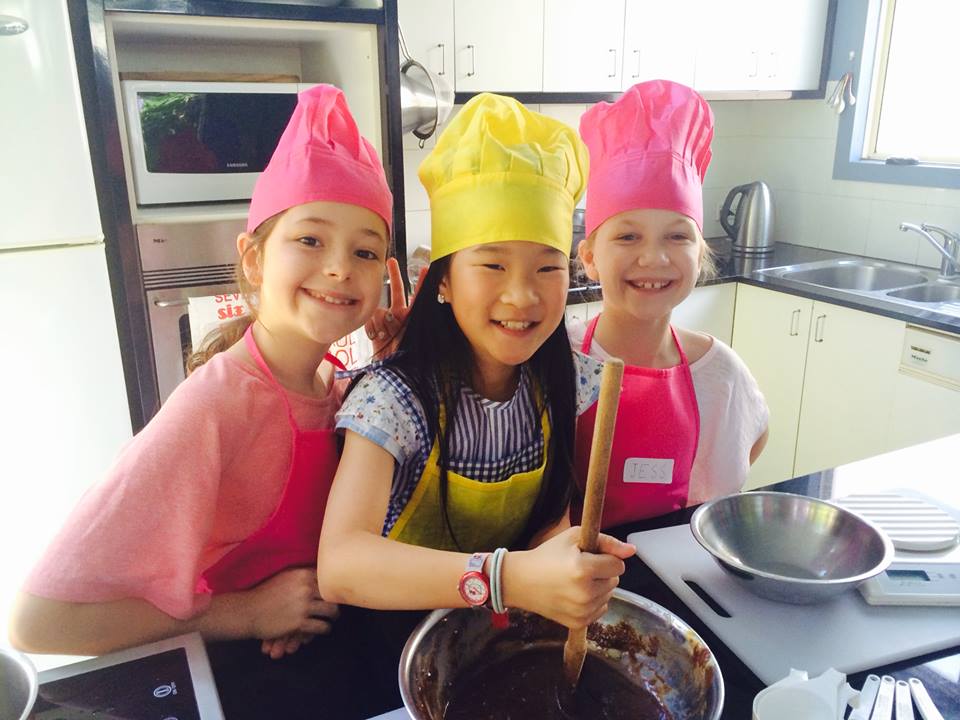 It’s not only because children love chocolate, it’s also because they so enjoy rolling the soft, sticky mixture into small balls in the palms of their hands and then rolling them in cocoa or coconut.
Most prefer milk and white chocolate to dark, probably because both contain higher levels of sugar and saturated fat and are less bitter than the dark.
Chocolate is known to stimulate the release of endorphins, natural hormones produced by the brain, which help promote well-being and feelings of pleasure.
One of the ingredients in chocolate is tryptophan, an essential amino acid needed by the brain to produce serotonin, a neurotransmitter also known as the “happy chemical.”
It also contains another lipid neurotransmitter, anandamide (from the Sanskrit word ananda meaning bliss or joy) which helps to create feelings of elation.
It’s no wonder they have such a look of delight on their faces as they lick their fingers once we’ve finished. 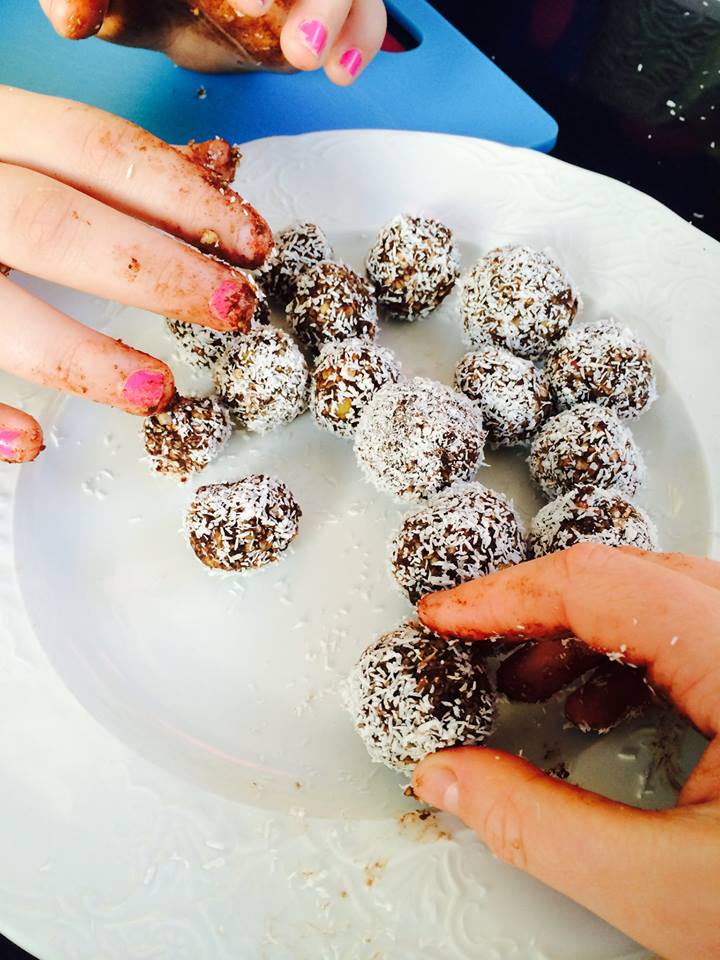 Rolling the truffles in coconut

But I doubt they’d feel the same way about the black and white truffles currently for sale at the Alba Truffle Festival in Piedmont, north-west Italy.
I imagine most of them would turn up their noses at the smell, look and taste of them. 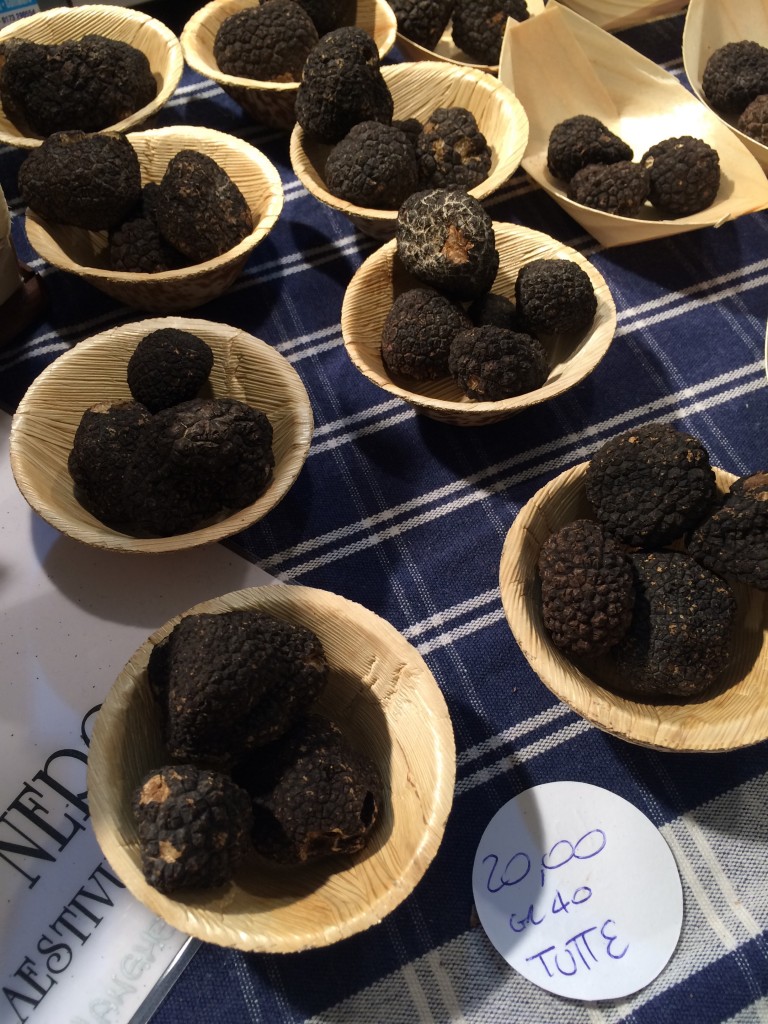 A couple of weeks ago I visited the fair with Sheelin Coates, an Australian friend, and mother of three (Alessandro, Isaella and Luciana), who is about to start her Master’s degree at UNISG.
Our visit coincided with the Truffle Bacchanal featuring typical costumes, games and street theatre from the Middle Ages and the town was packed with Italian and international tourists.
The kids became increasingly restless as we approached Alba, all hungry and eager to eat truffles for lunch.  And I’m not talking about the chocolate variety.
Because of the large crowd, it was difficult to find a parking spot and we drove around for quite a while before spotting one on the outskirts.
Finding our way through the crowds to the restaurant where we’d planned to have lunch was no easy feat, as we were frequently sidetracked by all the fun and games. 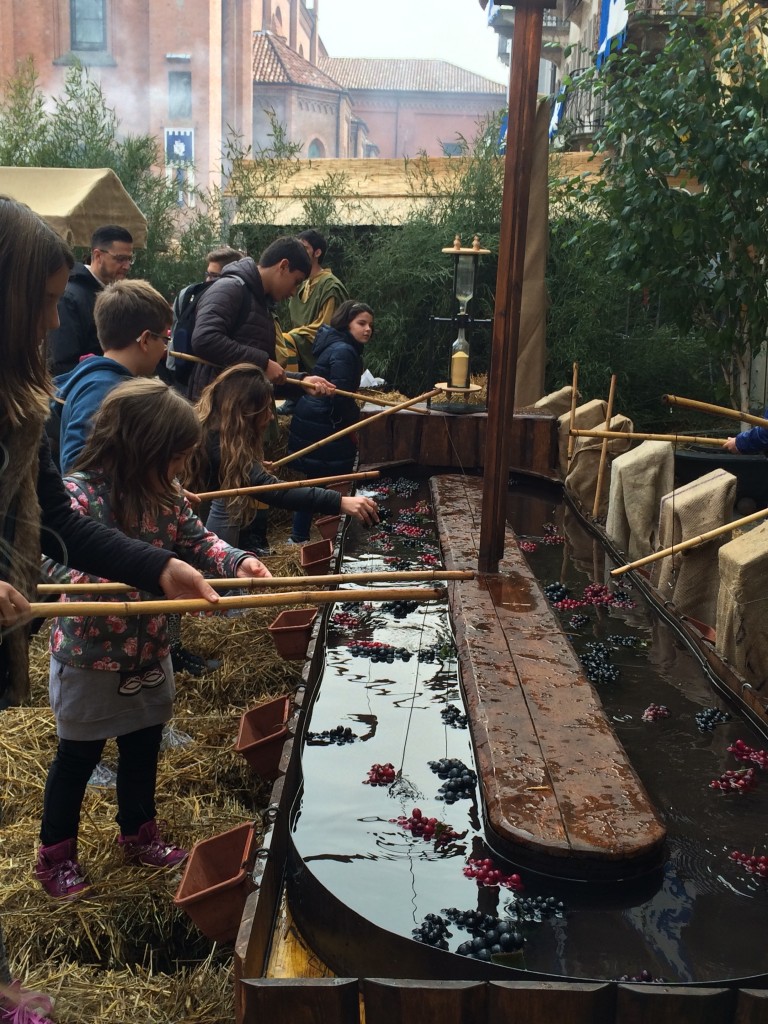 Fishing for grapes: one of the games played at the Medieval Fair (Il Baccanale del Tartufo) Alba

Fortunately we’d missed the Palio degli Asini or donkey race in which the nine borghi (neighbourhoods) of Alba compete for a painted cloth and which attracts even larger crowds. 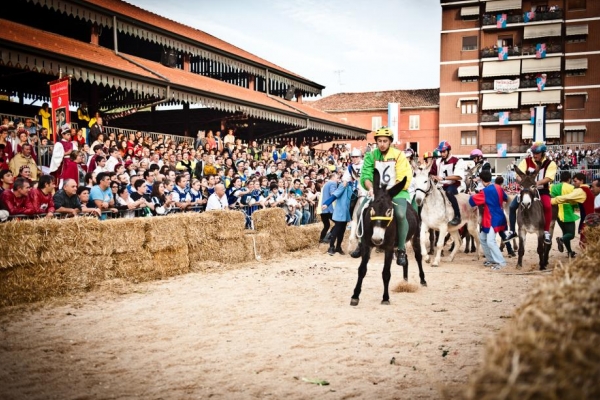 By the time we reached Vincafe, the children were famished. It, too, was packed and we had to wait a while for a table during which time we looked through their autumn truffle menu. The kids already knew exactly what they wanted: none other than the tajarin with butter and freshly grated black truffles over the top. Tajarin (pronounced tie-ya-reen) are a long soft yellow noodle typical of Piedmont made with a high ratio of egg yolks to flour (up to 40 egg yolks per 1Kg flour). 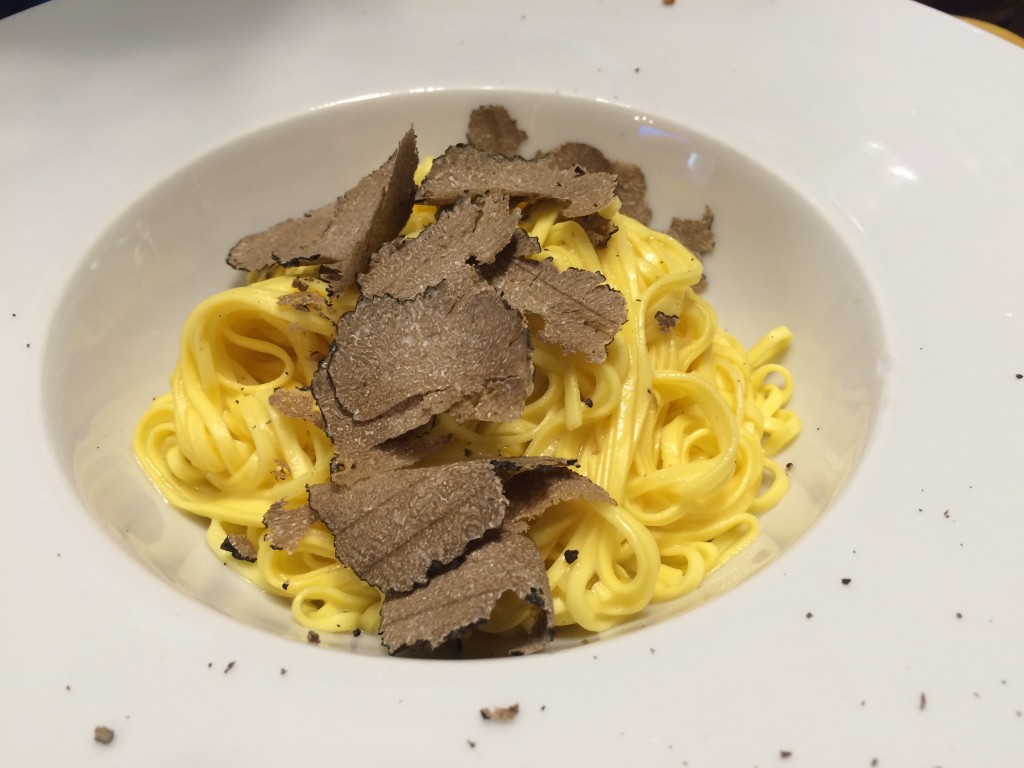 Tajarin with truffles and butter, a classic Piedmontese dish

I decided on the fried eggs with white truffle shavings and my friend chose the fonduta.
Each dish cost 8 Euros plus the cost of the truffles “according to market price.” The white truffles were 7 Euros extra per gram which doubled the cost of my dish.  The black ones were a bit less.
I was assured by the owner that the white truffles came from around Alba as these usually don’t appear until late October-early November.
“I know the supplier personally,” he assured me.
But I was disappointed. I could barely taste them.  Perhaps they were a few days old and no longer fresh?
I watched in astonishment as the kids scoffed down their glorious yellow pasta interspersed with black truffle shavings. Such sophisticated taste in ones so young is unusual. 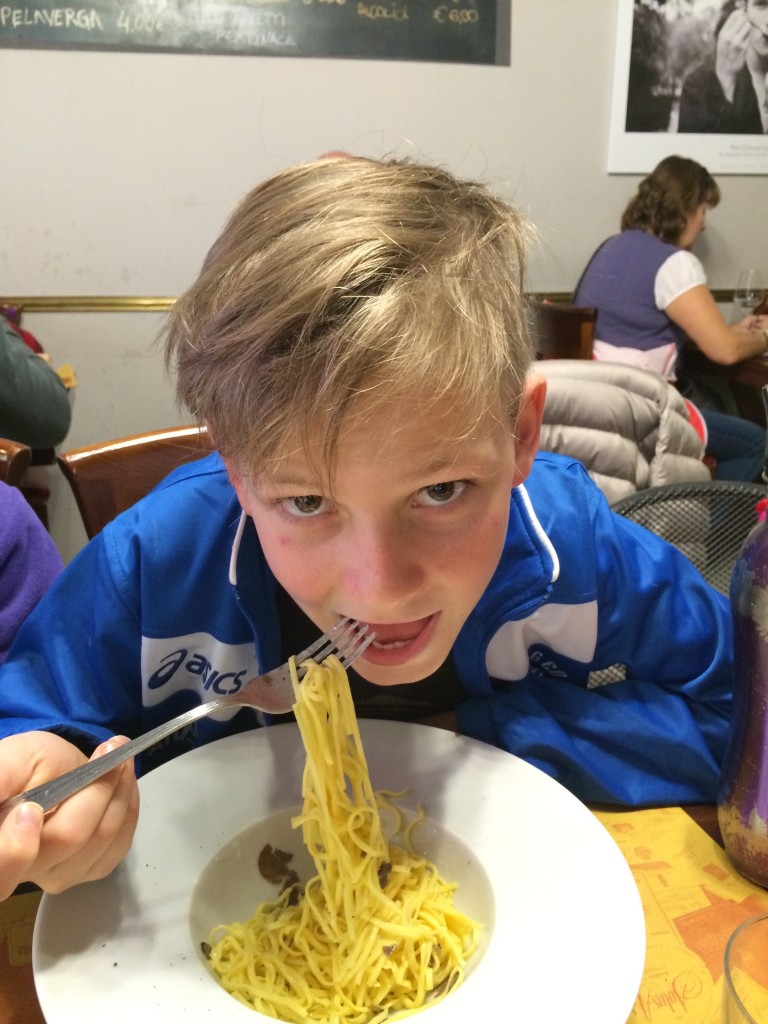 Alessandro scoffing down his tajarin with black truffles

One of them offered me a taste and suddenly I was transported to heaven.
In a recent issue of Scientific American I’d read that researchers in Italy have found that black truffles produce anandamide, the very same lipid neurotransmitter found in chocolate.
“Just one try and some become addicted,” says food anthropologist Layla Eplett.
When I asked my friend why her children were so keen on truffles, she told me she’d taken some truffle salt and truffle butter back to Australia with her last year.
“I put the salt on their steaks and added some truffle butter to the potatoes or polenta and they just went for it,” she said.
“And then they wouldn’t eat steak without it. They’ve always preferred savoury foods because I never introduced them to sweet foods.” 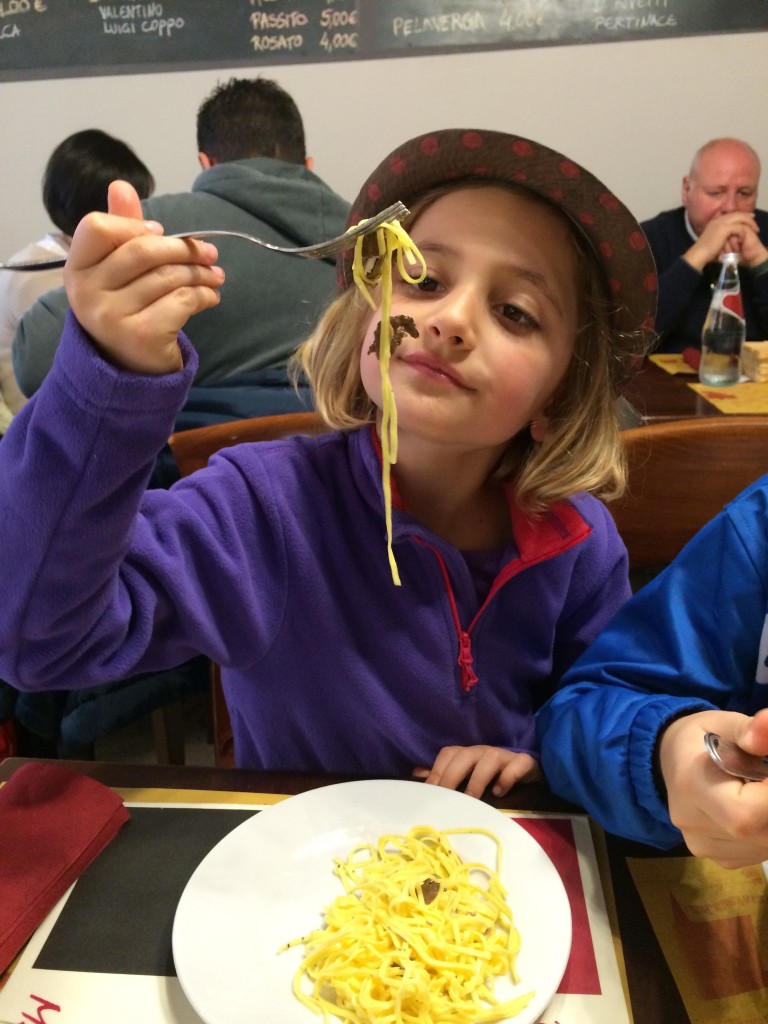 Bella with an irresistible shaving of black truffle

Favourite foods include kimchi, the spicy Korean pickled cabbage, and anchovies (which they call “salties”).
“When the girls were 4 years old they asked for ‘salties’ in their Christmas stocking,” she said, laughing at the expression on my face.
I was even more amazed to find an ice cream made with truffle and honey this week on the Uni menu for lunch.
It sat on a bed of crunchy brown ‘soil’ (made with salt, malt and hazelnuts) surrounded by a pool of white chocolate and jerusalem artichoke puree and was accompanied by a light, fluffy hazelnut sponge cake. 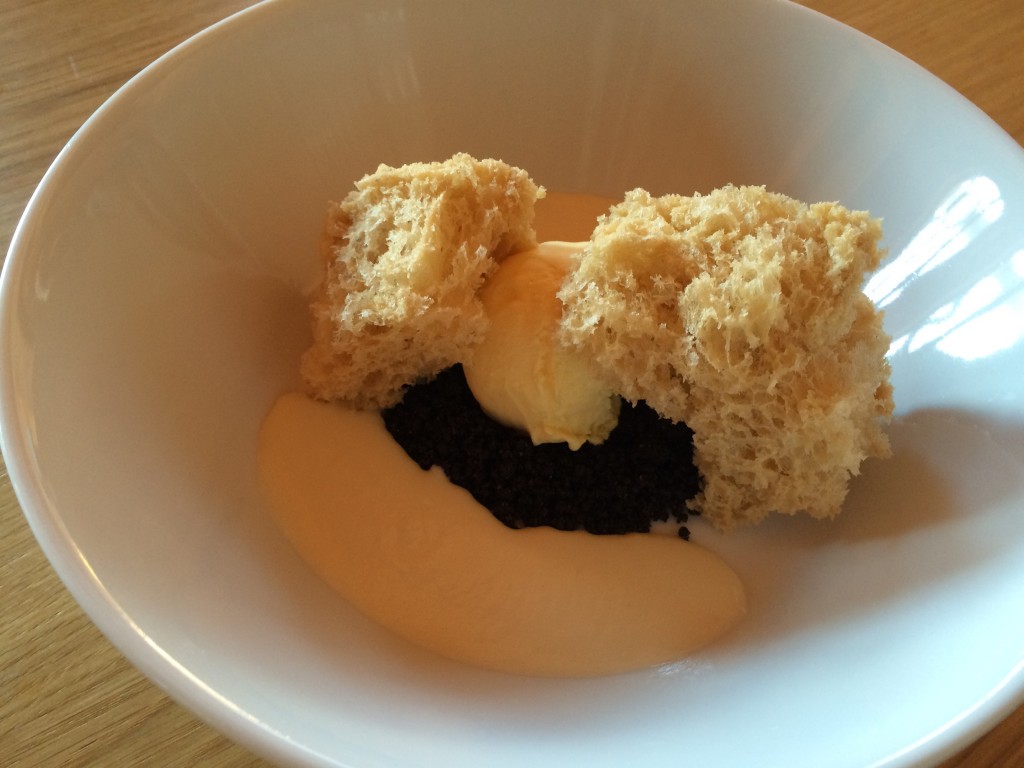 It was the exquisite creation of Christian Milone, the young executive chef at Trattoria Zappatori in south-west Turin.
As I tasted each delectable mouthful, I wondered what the kids in my Mini Chef classes would think.
I doubt they’d turn up their noses. They’d probably scoff it down as Alessandro and Bella did the truffle pasta. They’re new millennium kids, after all.

One Response to The Truffle Eaters