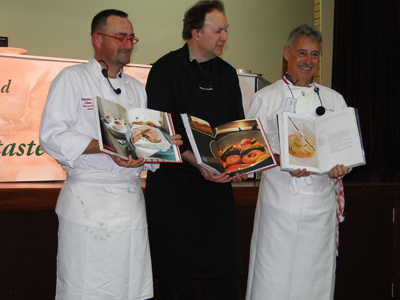 The highly-awarded owner-chef of The Loose Box restaurant just outside Perth W.A, is presenting a Master Class at the 5th Mundaring Truffle Festival alongside two other top Aussie/French chefs, Philippe Mouchel and Emmaneul Mollois.
“We have more truffles than customers this year. They might look like animal droppings but they taste much better,” he declares cheekily.
It’s no wonder he’s excited – in just five years the Mundaring Truffle Festival has grown from a modest attendance of 3000 people into a vibrant, successful festival attracting more than 21,000 local, interstate and international visitors.
“These truffles are just perfect.  We had one the other day which was the shape of an orange and about 650g.  Some weigh in at 1.5kg – this doesn’t happen in France,” says Alain holding one up to the audience and smelling it. 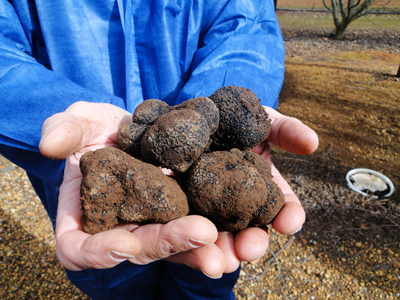 “Right now they’re perfectly ripe.  What I like about truffles is that they are seasonal and that once you’ve smelt and taste them, you’ll never confuse them with anything else. I prefer not to wash mine, just brush the dirt from them, so they retain their full flavour and store in the fridge with rice.
“Truffles combine best with fat and sugar, for example butter, cream, sugar, madeira and port. They don’t like acid such tomatoes, vinegar or citrus.” 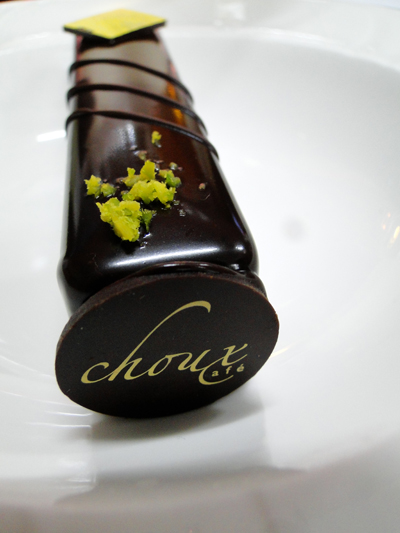 Mundaring, situated in the heart of the Perth hills, is where Alain’s restaurant The Loose Box is situated. Originally from France, Alain has been a driving force behind the development of truffles in W.A. and recently harvest a few of his own under trees he planted just seven years ago.
“Truffles are highly prized as food,” he says. “Brillat-Savarin called the truffle ‘ the diamond of the kitchen’ and praised its aphrodisiacal powers.  While the aphrodisiacal characteristics of truffles have not been established, it is still help in high esteem in traditional French, northern Italian cooking, and in international haute cuisine.
“Truffles became a popular delicacy in France from the 1780s.  Unlike mushrooms, they grow below the ground around the root system of oak and hazelnut trees.  Looking for truffles is almost awalys carried out with specially trained pigs or dogs. They have always been very expensive and were eaten mainly by nobles.  Because of their high price and pungent taste, they are used sparingly.” 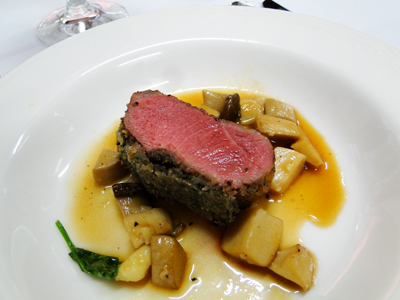 Most of the truffles at the festival are grown south of Perth at Manjimup by The Wine & Truffle Company under hazelnut and oak trees.
The black truffle (Tuber melanosporum) came almost exclusively from Europe, essentially France.  The first Perigord black truffles to be produced in the southern hemisphere were harvested in Gisborne, New Zealand in 1993.
In 1999, the first Australian truffles were harvested in Tasmania. In 1997 The Wine & Truffle Co at Manjimup planted their first trees and this year will export over 2,500kg French Perigord truffles to chefs around the world, fetching $AUD1600/Kg for top grade
“This is by far our biggest season ever,” says Sake van Weeghel, CEO of The Wine & Truffle Co. “The demand we have been receiving from chefs all over Australia and the world has prompted us to up our game.  This harvest is over 3.5 times bigger than our harvest last year and we can’t wait to share some of the best quality truffles with the world.” 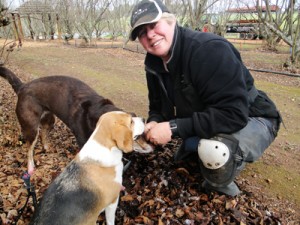 , Truffle hunting at The Wine and Truffle Co

Perhaps the highest accolade for this new Aussie export comes from Ralf Bos,  ‘the gourmet food and truffle pope’ of Germany.
“In 20 years of dealing with truffles I have learned there are only two varieties of truffles you should use: black winter truffles from France (January-March) and white truffles from Italy (October – December).
“To illustrate the value of a truffle better, I have established a scale from one to ten.
“Fifteen months ago I received the first delivery of Australian winter truffles from The Wine & Truffle Co of Manjimup.  It was immediately clear to me I was holding something very special in my hands.
“Today, after two Australian truffle season, I am certain that I need to expand the scale by half a point.  Australian black truffles from Manjimup deserve to be rated with 10.5.  Therefore the months June to September are for me top truffle months.” 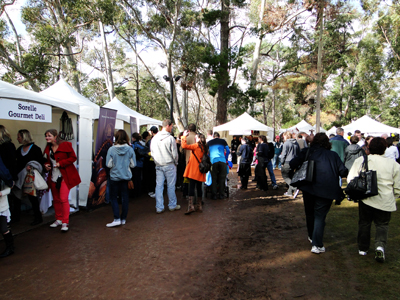