The last thing I expected when I returned to the Martin Place homeless camp today was a free feed. 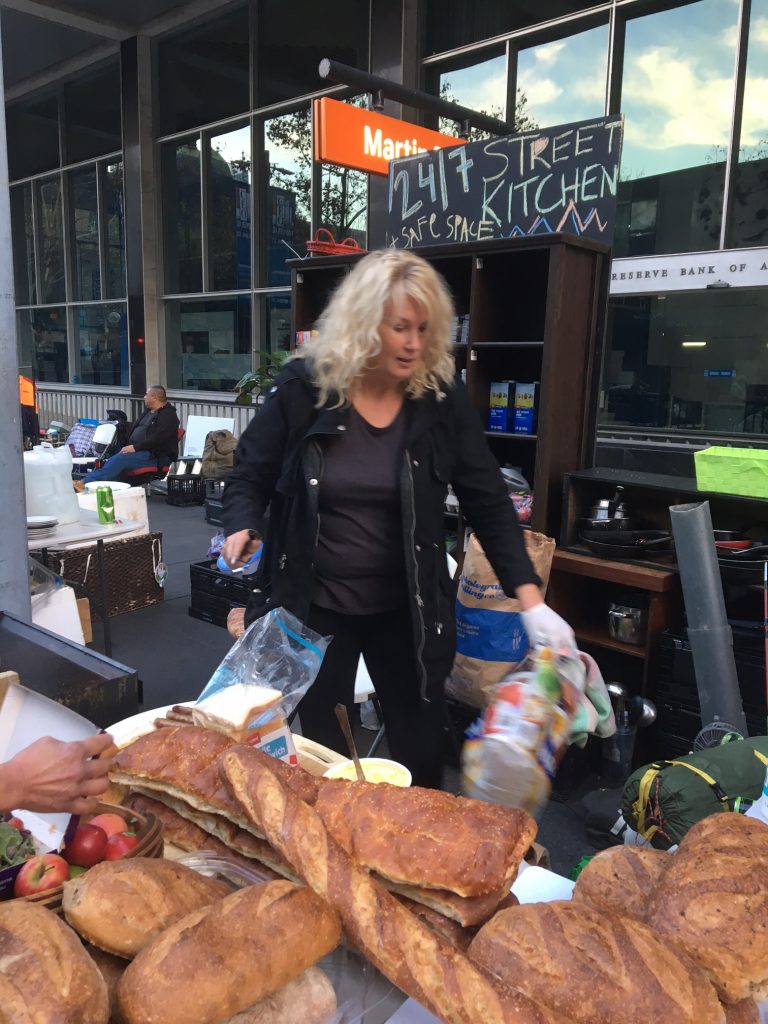 Despite the dismantling of the actual camp, the 24/7 Kitchen is still going strong and serving hot food, cups of tea, coffee and hearty soup to the homeless.
Only now they’re doing it right outside the Reserve Bank.
Some of the homeless have also moved their beds closer to the kitchen.
I imagine a few of the bank’s employees will be surprised when they turn up for work tomorrow morning.
When I arrived around lunchtime today, a couple of good samaritans had just turned up with tubs of freshly cooked pasta and bolognese sauce. 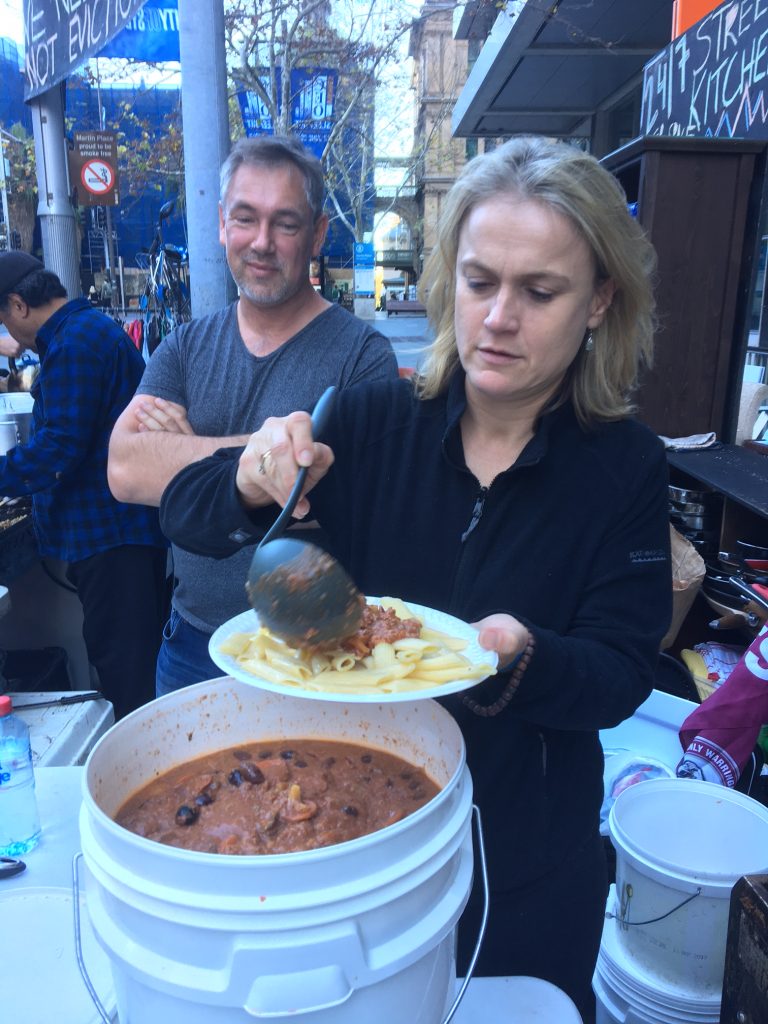 Originally situated opposite the Reserve Bank and under the hoardings around a Lendlease building site, up to 70 homeless people a night have been living in the camp (or “Safe Place”) for the past six months.
But after being served  early yesterday with a letter by the City of Sydney for being a ‘public nuisance’, council workers cleared out the camp.
“The City has determined that the rubbish, structures and belongings located under and nearby the hoarding located at 58-80 Martin Place, Sydney, are a public nuisance which the City intends to abate by the removal of the items from Martin Place.
“The accumulation of items in Martin Place, including a BBQ, gas bottles, tents, food and other items has been determined to be a public nuisance as it materially affects the reasonable comfort and convenience of other users of Martin Place,” said the letter, written by David Riordan, director of city operations.
All items removed will be labelled, itemised and held for collection at City facilities for one month, it stated. 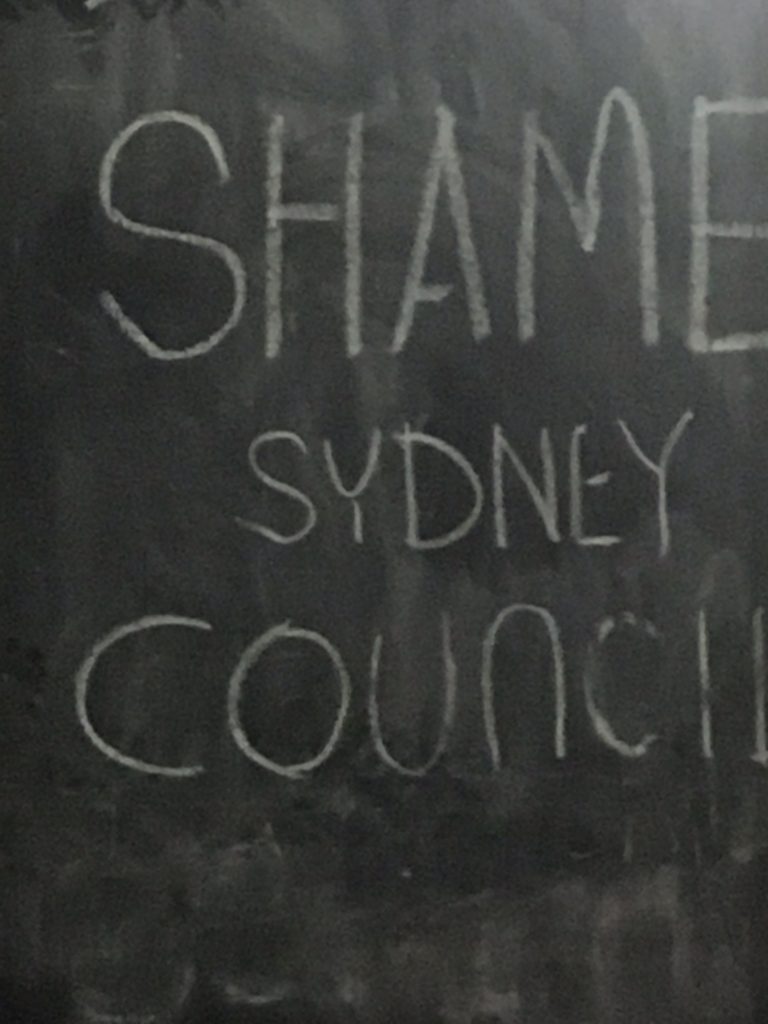 Chalkboard protest on the hoardings

Last night the kitchen was bolstered by the arrival of two vans, one from Guru Nanak’s Free Kitchenette (GNFK) serving Punjabi food (a variety of rice, curried chickpea, lentils, tofu and vegetable dishes); 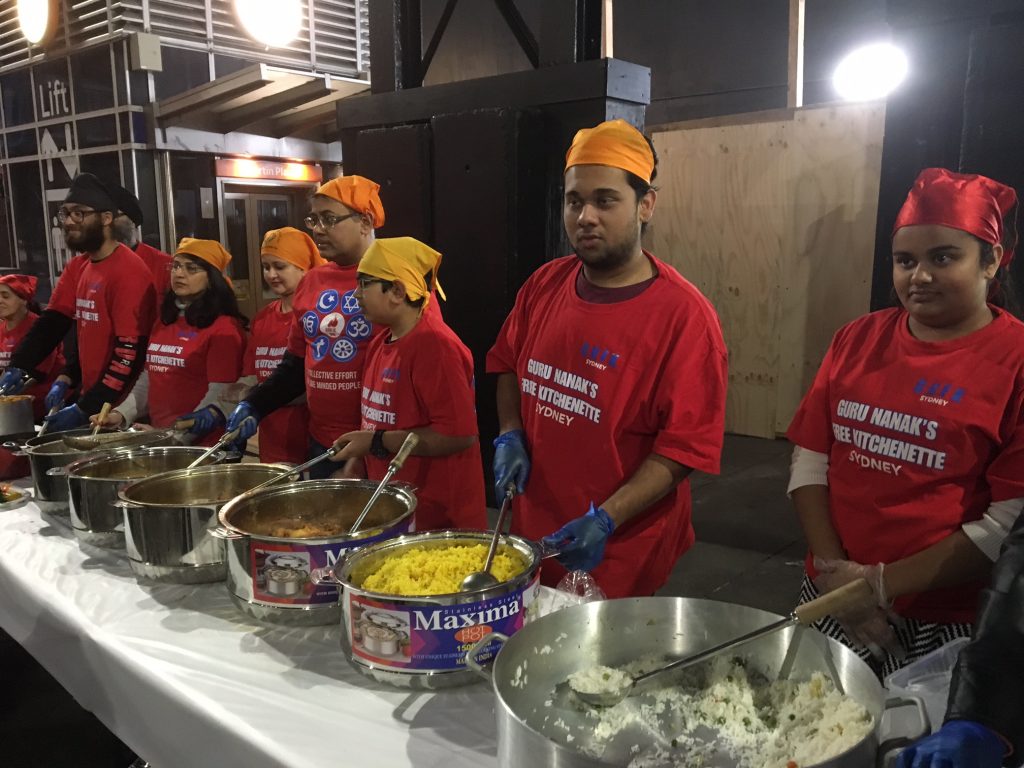 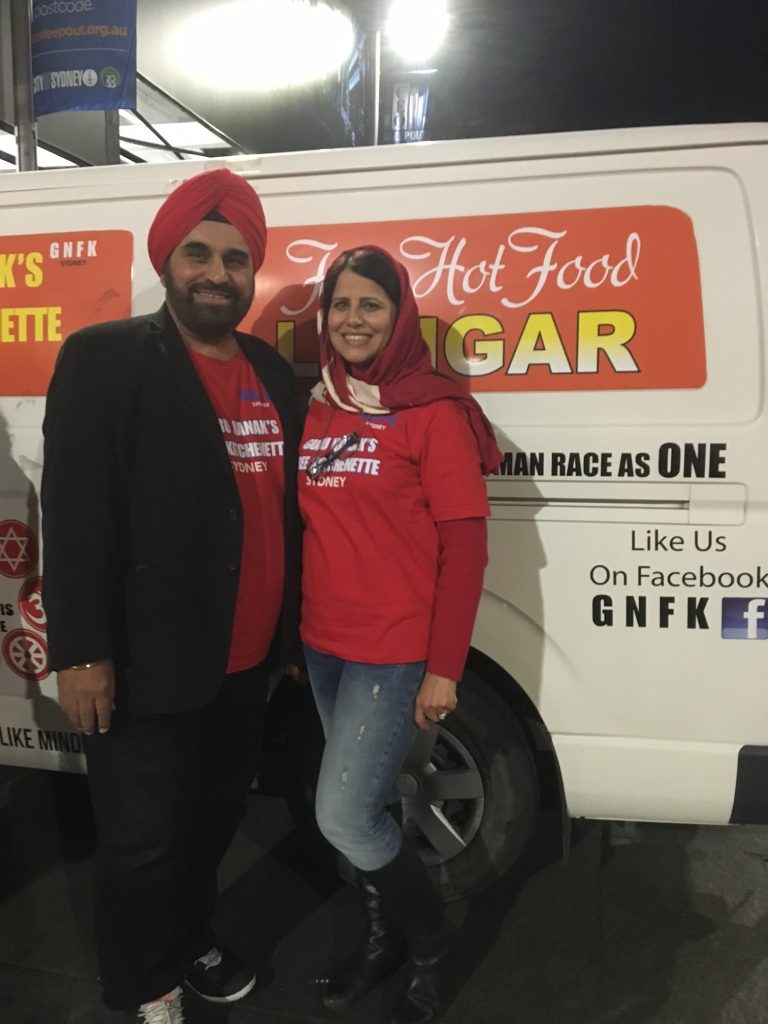 the other from The Good Shepherd serving a variety of Assyrian food, pasta dishes and fresh salad.
I was humbled by their goodwill, generosity and the quality of the food on offer. 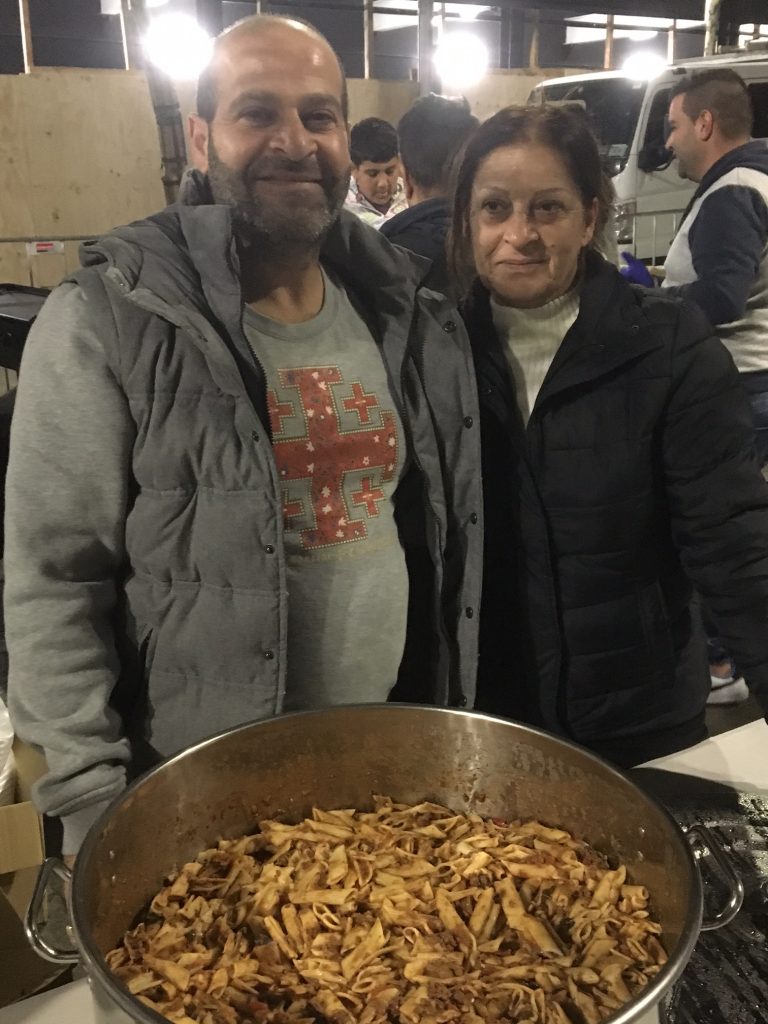 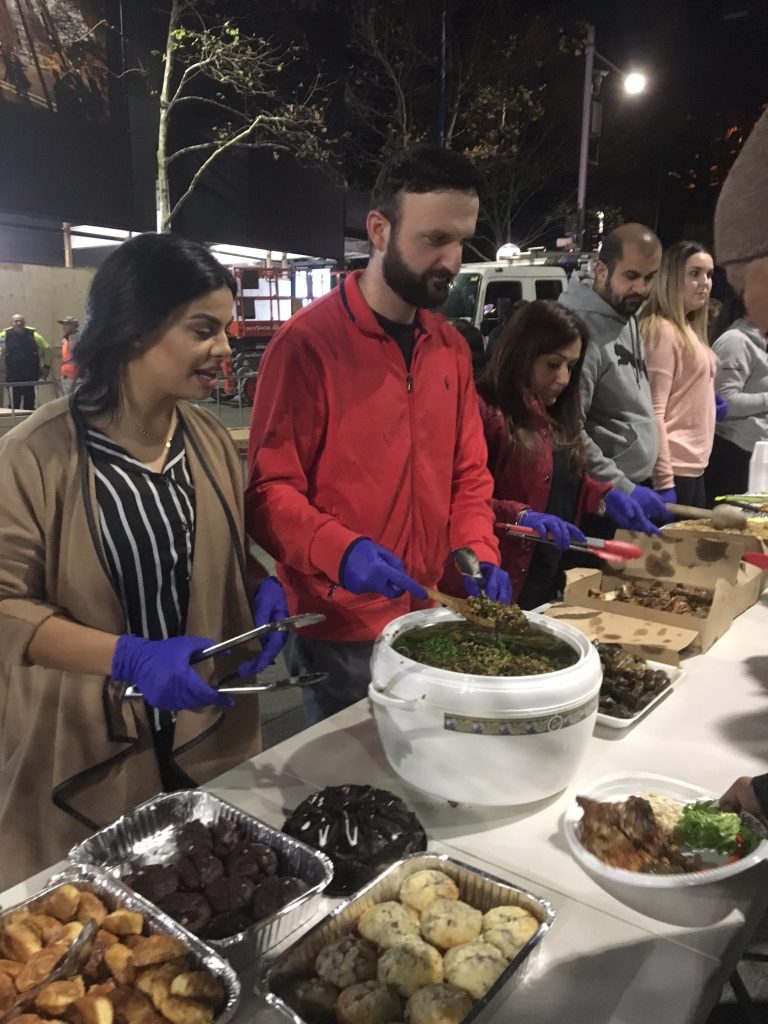 “We started GNFK five years ago,” Lucky Singh told me. “It was my passion to help homeless people.  My husband and I started by cooking for 500 people in 2012 and we now have 150 volunteers, many of whom are from Nepal, Pakistan, Bangladesh,China and Fiji.
“They cook the food fresh on the day and we come here every second or third Saturday night.”
Lucky’s daytime job is teaching English.
“Guru Nanak taught us to do good to all,” she said.  “This saves my life. Humanity is our religion.”
Lucky’s daughter, Shaizy, who works for Bridge Housing in Redfern and was helping out last night, was critical of the lack of housing availability for homeless people.
“Why don’t we do what they do in Canada?” she said.  “Why don’t they build hostels so that everyone has a bed and can get their life back in order?” 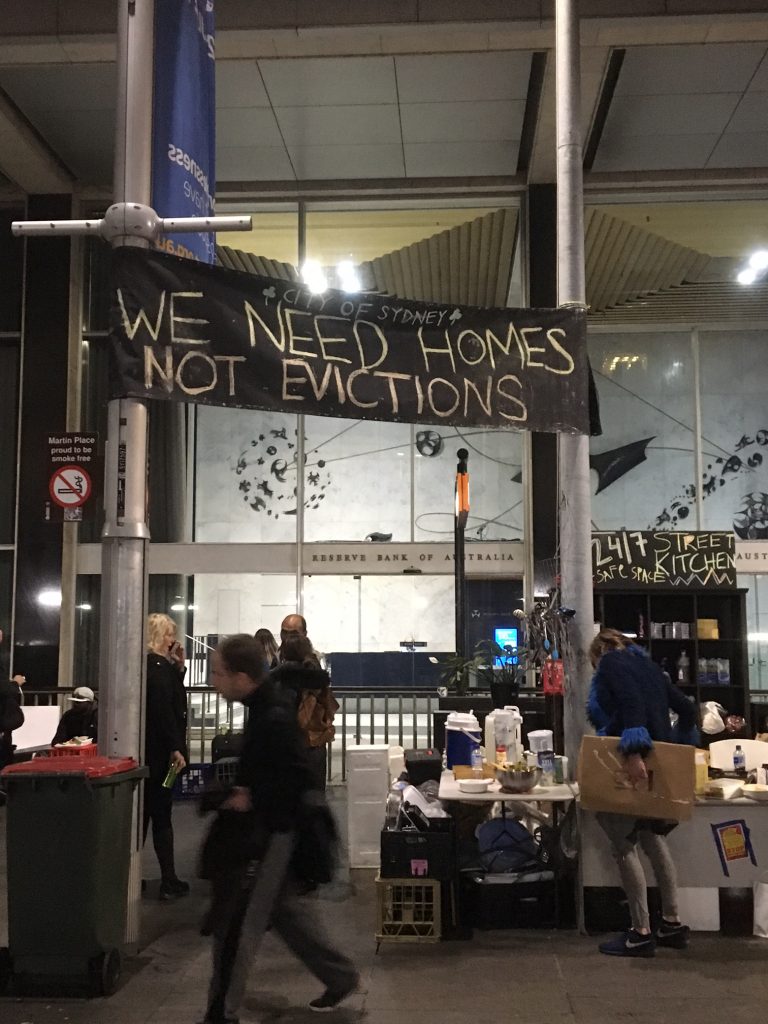 “If the Council doesn’t house us, we have an obligation to keep doing what we’re doing,” said Lanz Priestley who set up the 24/7 Kitchen and Safe Space last December. They keep saying they’ll offer accommodation, but don’t.
“Now that we’ve provided this service, we’re obligated to continue with it. We’re looking at growing our service and making it sustainable.”
Lanz, who project-managed the QVB building during the 1980s, first became involved with feeding homeless men when living in Wellington, New Zealand, in the early 1960s.
“My brother and I used to pass by old guys who were sleeping out in the frost and drinking metho. We started taking them soup and food and it grew from there.”
Despite his exhaustion after the day’s events, he sat and talked to numerous people last night including Kel McGregor and Scott Nolan who’d arrived from Bowral with food, rolls of toilet paper and warm jackets.
“Food fulfils a basic human need, ” said Kel. “I just wish there was more I could do.”

“The Council doesn’t want people in heels and business suits being confronted by the homeless,” she added.
Another volunteer, Carolina Veloz, pointed out that homelessness is often associated with mental health issues.
“”There are 28,500 homeless in NSW and over 105,00 in Australia,” she told me.
“Last night I saw footage of  police at Central Station pushing a homeless man backwards. The police need training in how to deal with these people who are often suffering from anxiety and depression.”
Carolina, who works and studies at Sydney University in the Engineering Department and is also a director at Rotary, was busy ladling soup when I arrived. 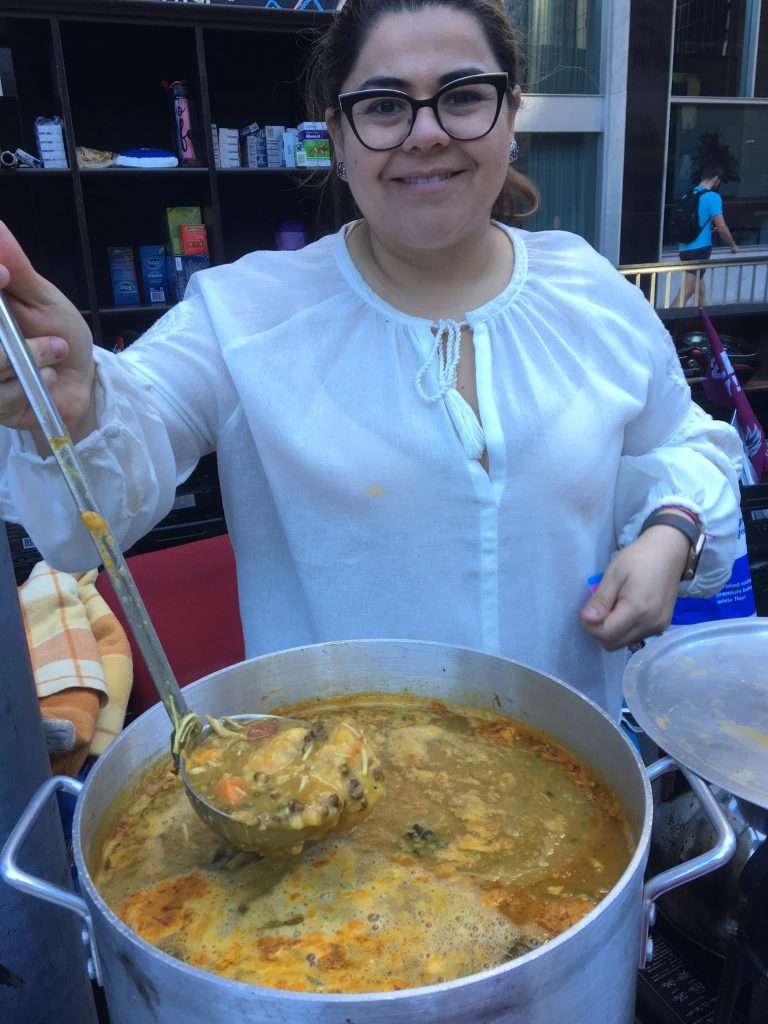 Like so many of the volunteers I met, she helps where she can.  She offered me a cup of tea and asked if I’d like some soup.
“My girlfriends are having afternoon tea at the QVB today, but I’ve chosen to be here to help because it’s important to do good and to be thankful.”
As Meriana, one of the volunteers from Balmain said:
“We’re so privileged.  You’ve gotta share it. I’m always so grateful to be at home on a rainy night.”
How, I wonder, will the 24/7 Kitchen manage without shelter once it begins to rain?

Both groups offered me food