How was the original Anzac made? The biscuit, that is, not the soldier?
If you visit the Australian War Memorial in Canberra and hunt around in the research centre you’ll find it described as an army biscuit (or Anzac wafer or Anzac tile).
This version was a hardtack (or long shelf-life like) biscuit used as a substitute for bread. It was made with flour, sugar, milk powder, salt and water. Rolled oats, coconut and golden syrup are all absent. 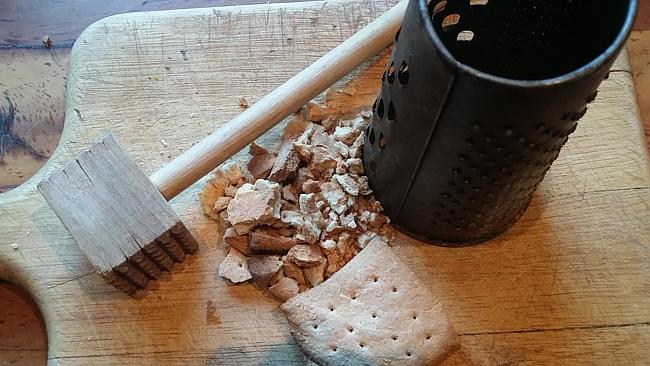 Unlike bread, however, the biscuits are very, very hard. Some soldiers found them more palatable if they ground them up and used them as porridge. A recipe supplied courtesy of Frank Townsend, former chief chemist at Arnotts Biscuits, points out that after rolling and pressing and cutting into squares, the biscuits were “docked” with a flat-ended pin or rod.
“Each biscuit should have five vertical and five horizontal rows of docker holes, 25 holes in all,” says Townsend. “There are those at the War Memorial who argue for 49 holes (7 x 7) as the authentic number”. 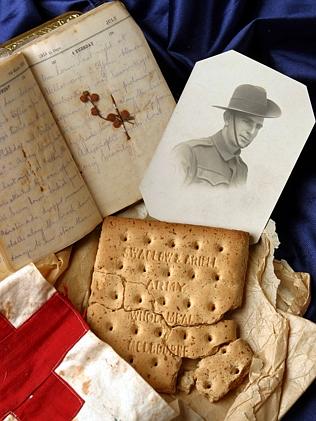 Looking at the illustration which accompanied the recipe he sent me, they remind me in some ways of Vita Weats.
They certainly don’t look like the Anzac biscuits I bake at home. Another recipe, provided by Bob Lawson, an Anzac present at the Gallipoli landing, gives a more popular version and includes rolled oats, coconut and golden syrup.
In One Continuous Picnic, Michael Symons says that this version was in the recipe books by 1925. Certainly there are countless variations (a 1945 version is kneaded like bread and called parkin or cocky’s joy) and some have suggested it was an adaptation of traditional Yorkshire biscuits called parkin.
You’ll find my favourite Anzac biscuit recipe here.