High above the hairpin twists and curves of the glorious Amalfi Coast, south of Napoli, lies the wide green plateau of Agerola.
Surrounded by the Monti Lattari (Lattari Mountains), it’s nicknamed Little Switzerland because of its fresh mountain air and greenery. 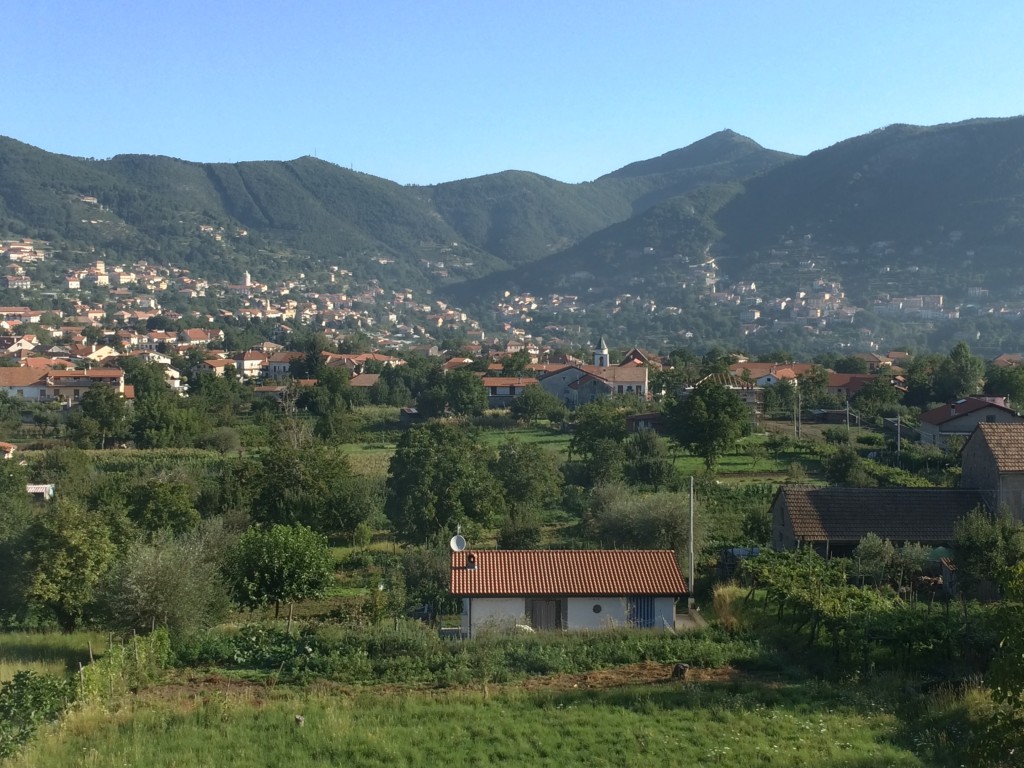 View over the wide green plain of Agerola

Despite being settled since Roman times (the name Agerola derives from the Latin Ager which means field), I only discovered it a few months ago when visiting  Giuseppina Milo at Azienda Agricola Milo Raffaele with a group of students from UNISG where we watched her make mozzarella cheese by hand.
It was there I met Camillo and Filomena, a delightful couple from Bomerano a few kilometres down the hill from Giuseppina’s. Standing on the terrace at Giuseppina’s and looking out over the hamlet of Agerola to the wide blue bay of Salerno beyond, I fell head-over-heels in love with the landscape. I was determined to return and decided to stay in Agerola for a few days during the August holidays. 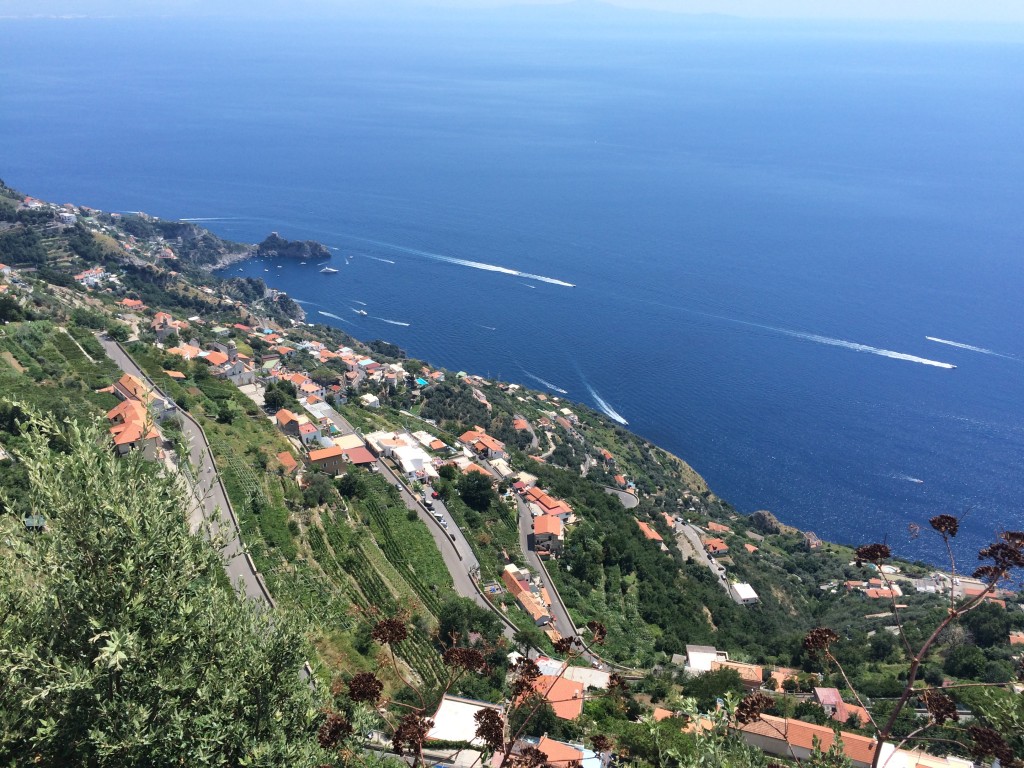 The view down to Furore and along to Amalfi from via Casalone, Agerola

Not only are the views from Agerola  stupendous, stretching across an endless blue sea from Salerno to Capri, there are far fewer tourists so you don’t feel as hot or as crushed as in Amalfi or Positano, especially during the height of the summer season (a word of advice: it’s probably best not to visit the Amalfi Coast in August as it’s over-run by tourists).
Agerola is famous for its cheeses and butter (the word Lattari, as in Lattari Mountains, comes from the Italian for latte or milk).
And for its potatoes – the  Gusta la Patata festival is held every year in mid August to celebrate the many ways in which potatoes can be transformed into tasty dishes.
The fabulous Fiordilatte di Agerola,which we had watched Giuseppina making, is a PDO (Protected Designation of Origin) fresh cheese made from the stretched curd of whole cow’s milk.  It’s just one of many excellent cheeses from Agerola.  Others include Provolone del Monaco which is only produced in the area around the Lattiri mountains with cow’s milk and matured for 6-18 months; smoked caciocavallo, a stretched curd cheese tied up in the shape of a sleigh bell and smoked; ricotta fuscella (ricotta in a woven basket) and smoked scamorza, a stretched curd cheese not unlike mozzarella, though stronger in taste. 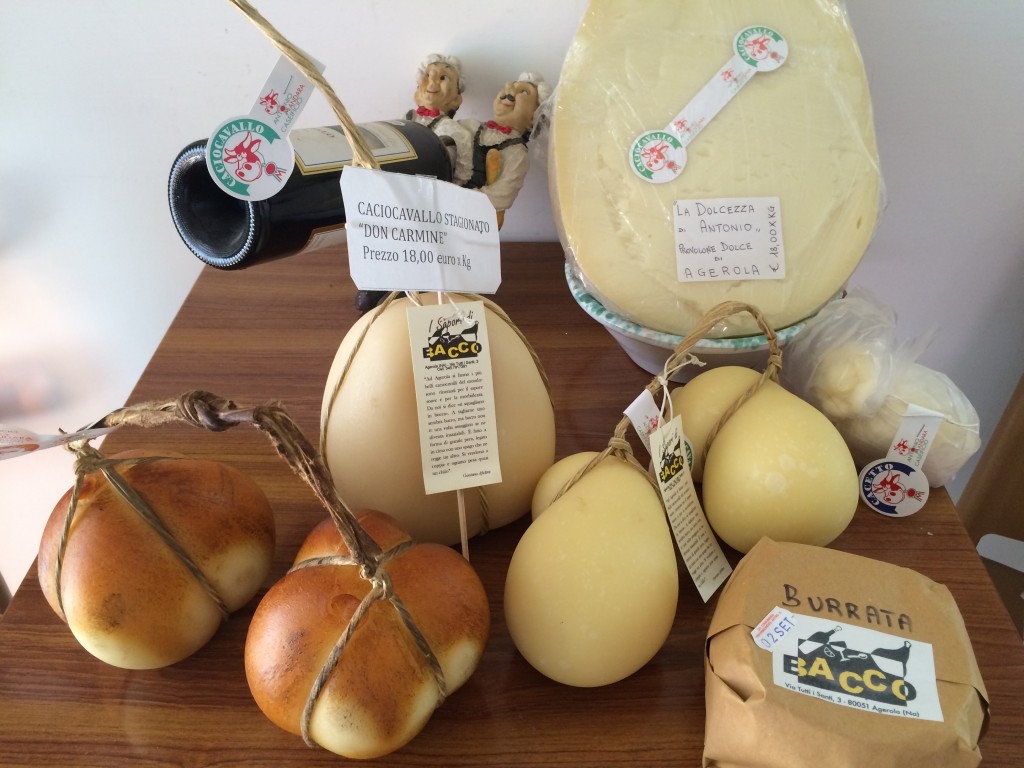 Some of the cheeses sold at ‘I Sapori di Bacco’, Agerola

You’ll find an excellent range of these cheeses, along with other locally made products at I Sapori di Bacco, a tiny gourmet food in front of the lovely pale pink Chiesa di Tutti i Santi and opened a couple of years ago by Antonio Ferraioli. 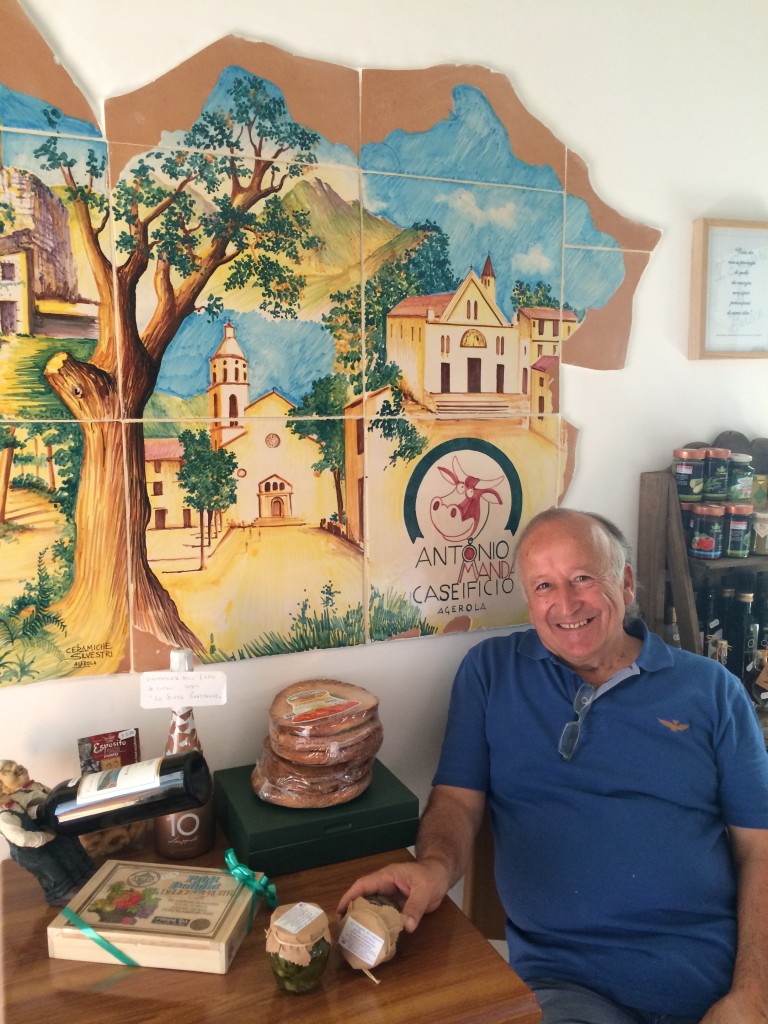 Antonio Ferraioli with some of the products he makes at ‘I Sapori di Bacco’, Agerola

Tucked away underneath is a surprisingly large cheese factory, Antonio Mandara Caseificio, where many of the cheeses sold in the shop upstairs are made.
If Bacco sounds familiar, it’s because Ferraioli used to be involved with Bacco restaurant, a few kilometres down the winding roads at Furore. He’s currently compiling a book of his mother’s (Letizia), recipes who worked as grill-chef at Bacco for 60 years. 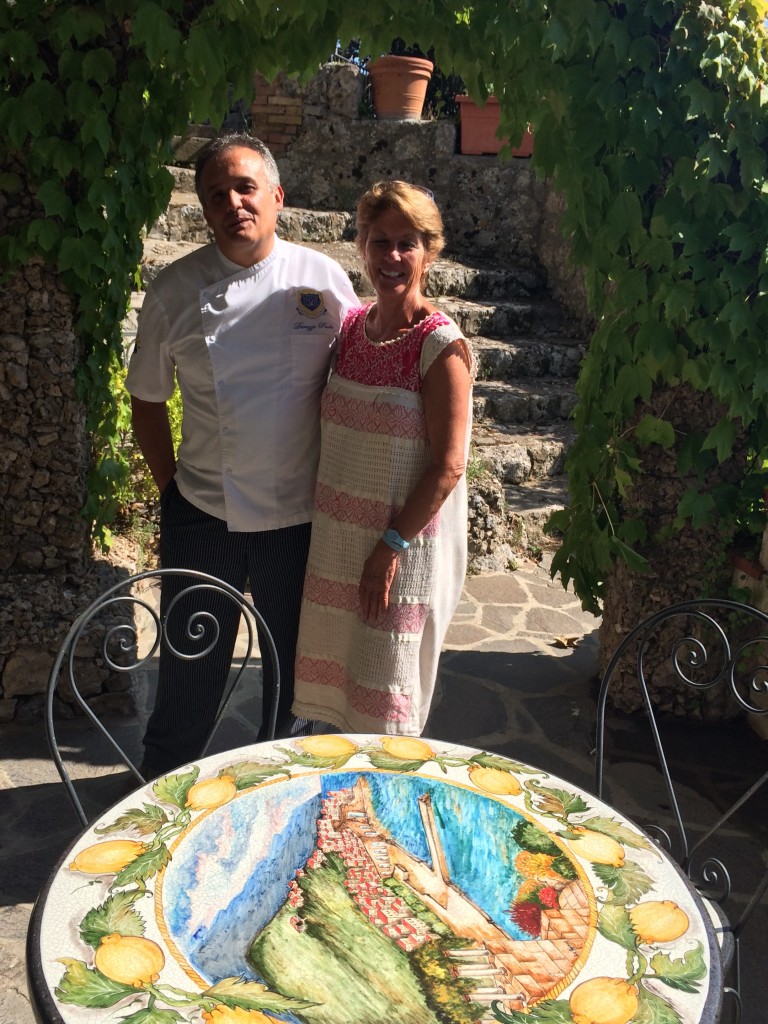 Not far down from I Sapori di Bacco on the road to Furore is Hotel le Rocce where chef Pietro Paolo Durazzo wields his magic with signature dishes such as calamaro ripieno di provolone affumicata (calamari stuffed with smoked provolone) and tortine di palate bianchone di Agerola con gambheri (potato cake with prawns – made with white potatoes from Agerola). Paolo has been proprietor of the hotel for the past decade before which he had his own restaurant, Lo Scoiattolo in Pimonte.
The hotel is built on a terrace overlooking the coast and is a popular wedding venue. During the summer months, it’s a terrific place to escape the madding crowds down below on the coast, swim in the sunny outdoor pool and have lunch. 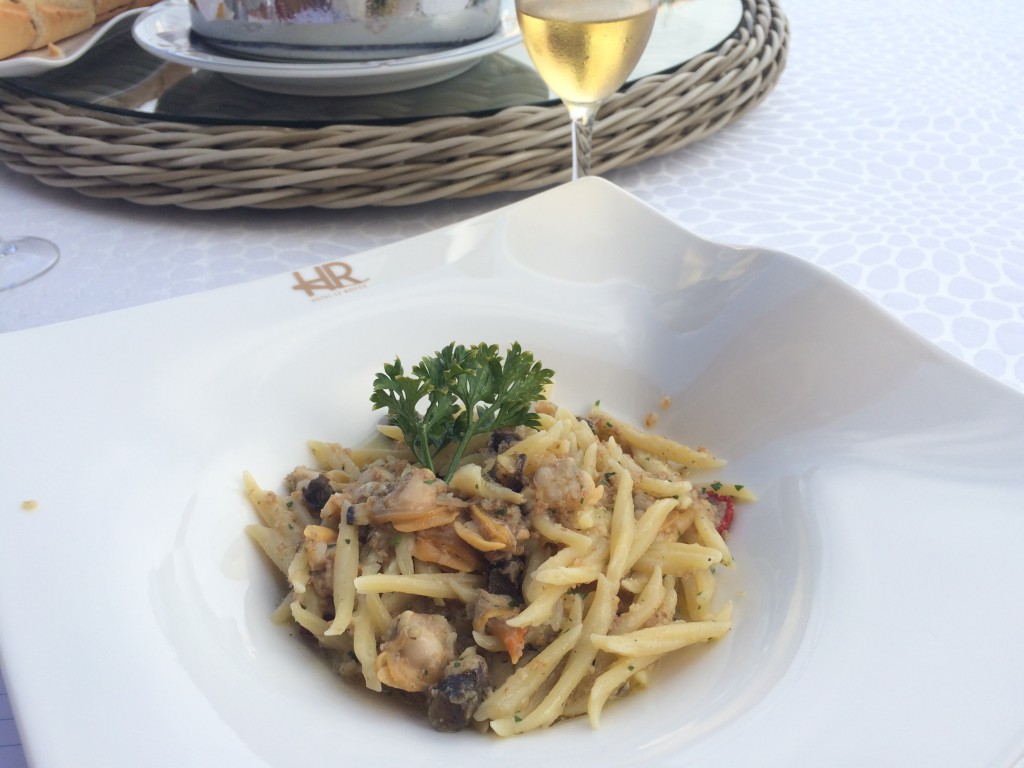 On the day I visited, Paolo made some special dishes for us to sample which included a delicious trofie con vongole e sconcigli (short twisted pasta with clams, sea snails, dried breadcrumbs and colatura di alici), a couple of fish dishes, one stuffed with fior di latte cheese and another simply grilled. For starters, crumbed, deep-fried crayfish with fior di latte cheese and served with local tomatoes, olives and capers. 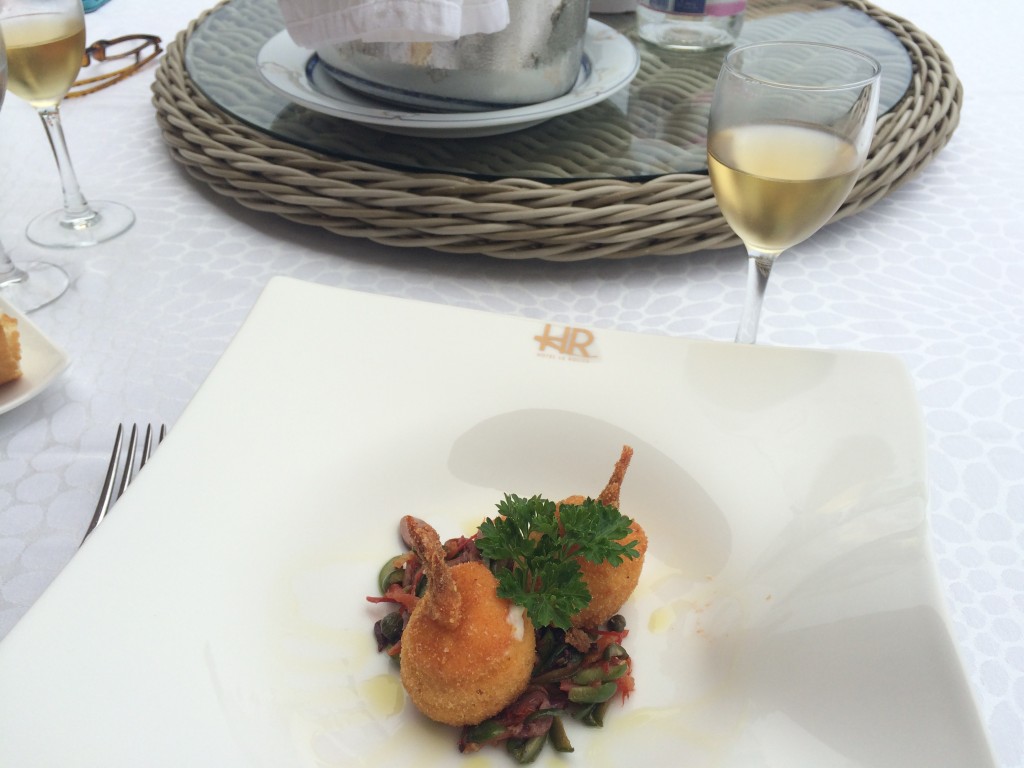 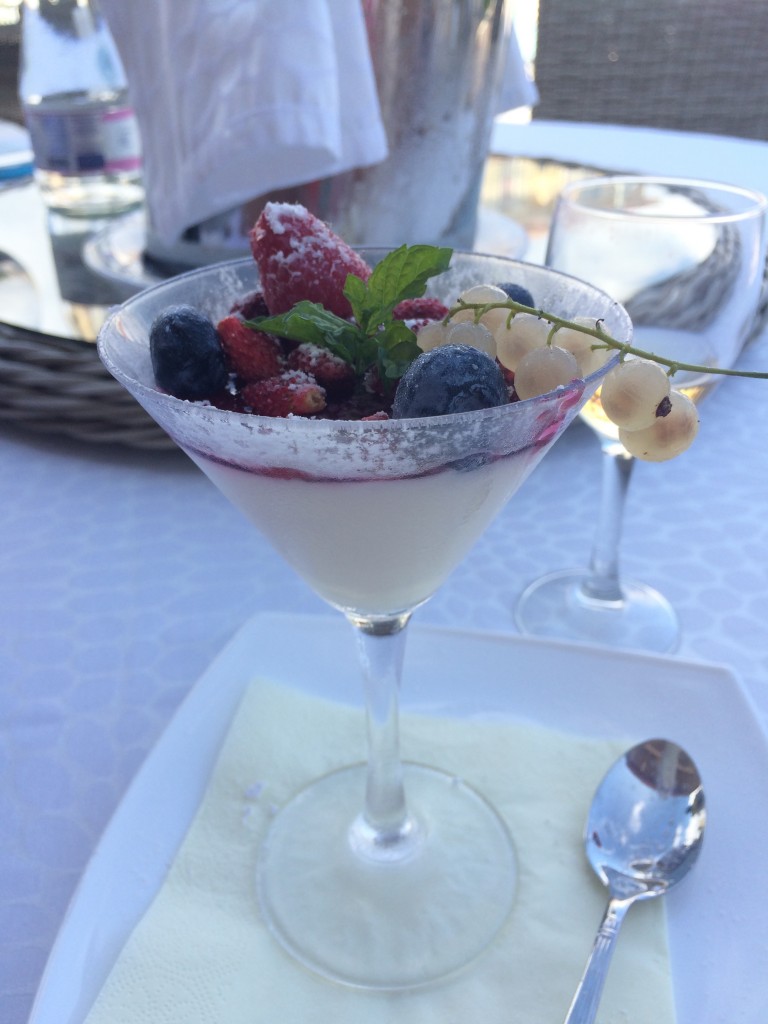 In keeping with the pride locals have in their produce, I stumbled across a surprising number of flourishing vegetable gardens and orchards in Agerola during my walks.
One day, when walking down to the piazza in Bomerano, I passed by a house where the whole family was busily involved in making  sugo (tomato sauce). 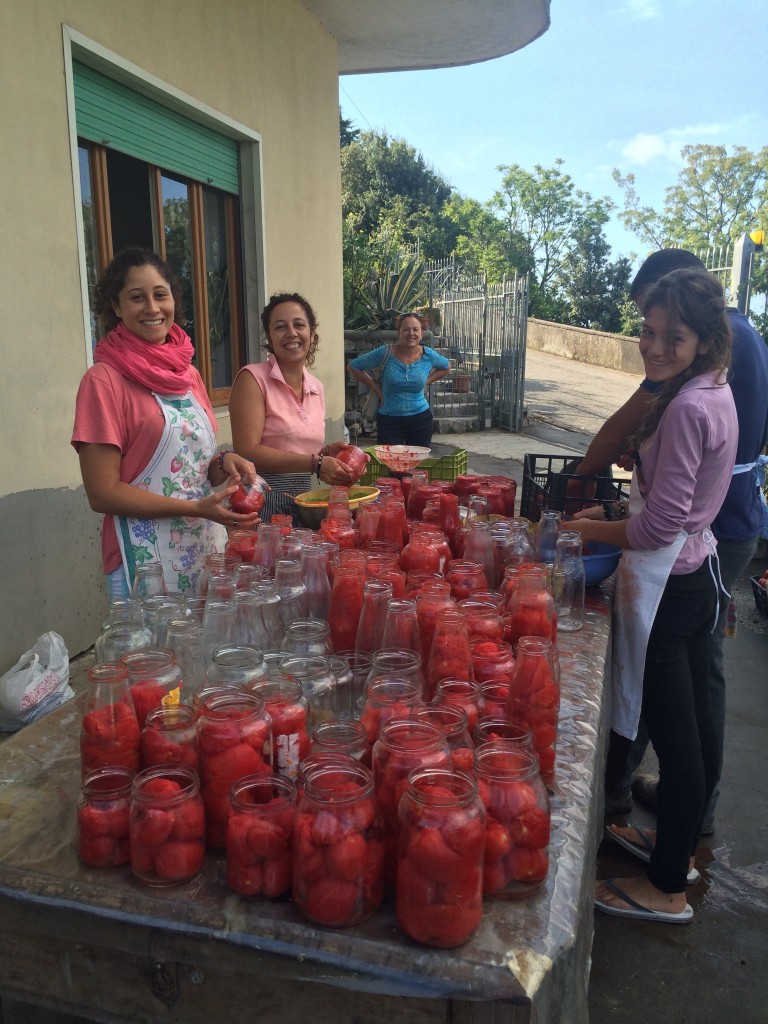 Camillo and Filomena also have a flourishing vegetable patch and conserve many of the veggies they grow. Sadly, they had planned to pick and conserve their tomatoes the day after I left.
Filomena is an excellent cook and makes terrific use of her bountiful garden produce. She also bakes irresistible cakes. 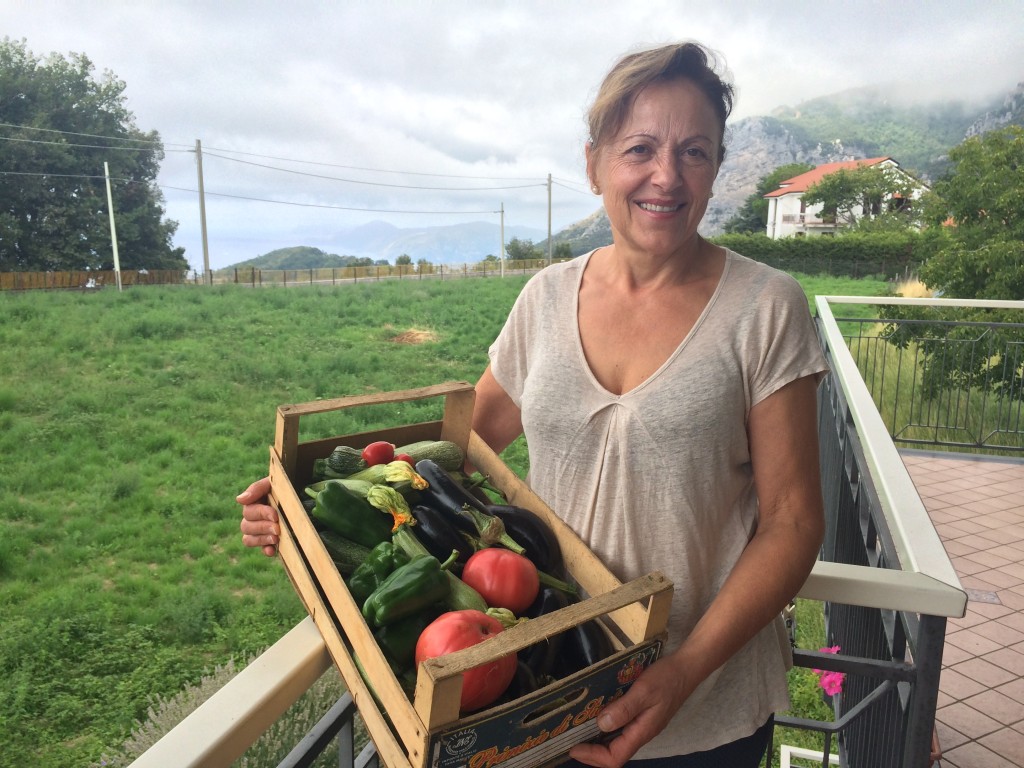 Filomena with a box of her home-grown veggies

Both Camillo and Filomena are so warm and friendly and more than willing to share their knowledge not just about Agerola, but about the coast from Naples south, and all the things you can do and see there.
Just near where they live is a lovely wooded area, a divine spot for picnics.
But most divine is the view from the wide terrace at the end of via Casalone. 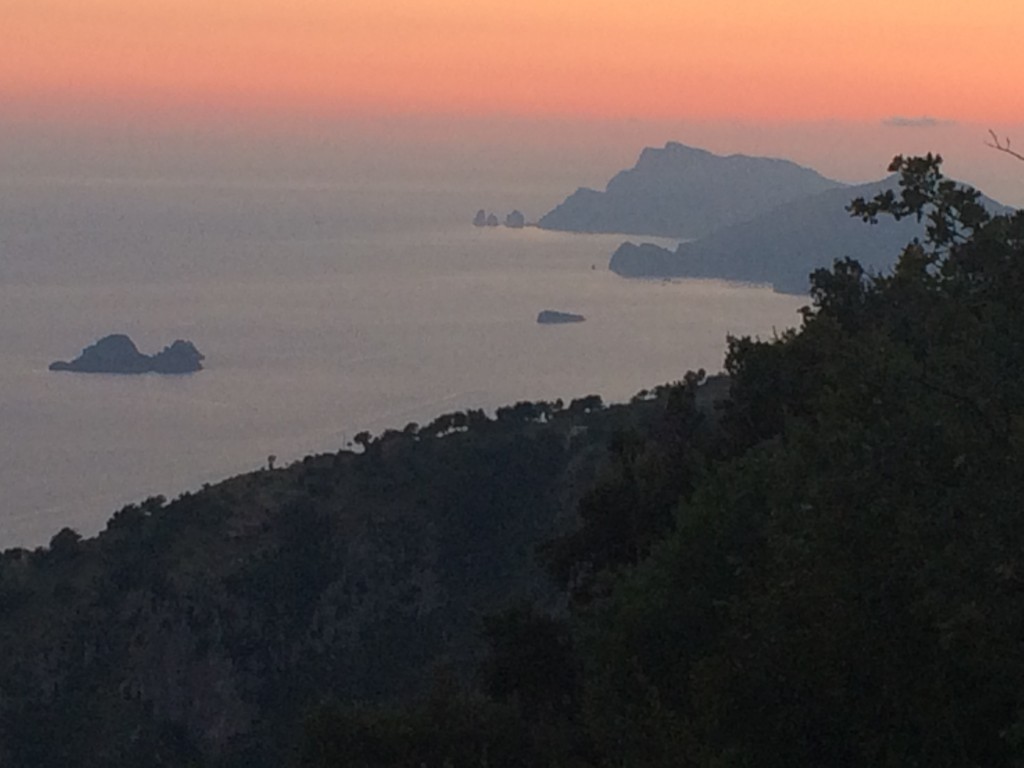 View from via Casalone to the Isle of Capri at sunset

I swear I could hear Caruso singing.

2 Responses to Up With The Gods in Agerola