I had no idea what I was getting myself into when I agreed to accompany my sister Justy and her partner on a recent trip to Japan.
She was keen to see more than the usual tourist sites in Tokyo and Kyoto, as was I, and to include a few days skiing in Nozawaonsen, a snow resort 3 1/2 hours north-west of Tokyo, plus a walk along sections of the ancient Tokaido Road which links those two cities. 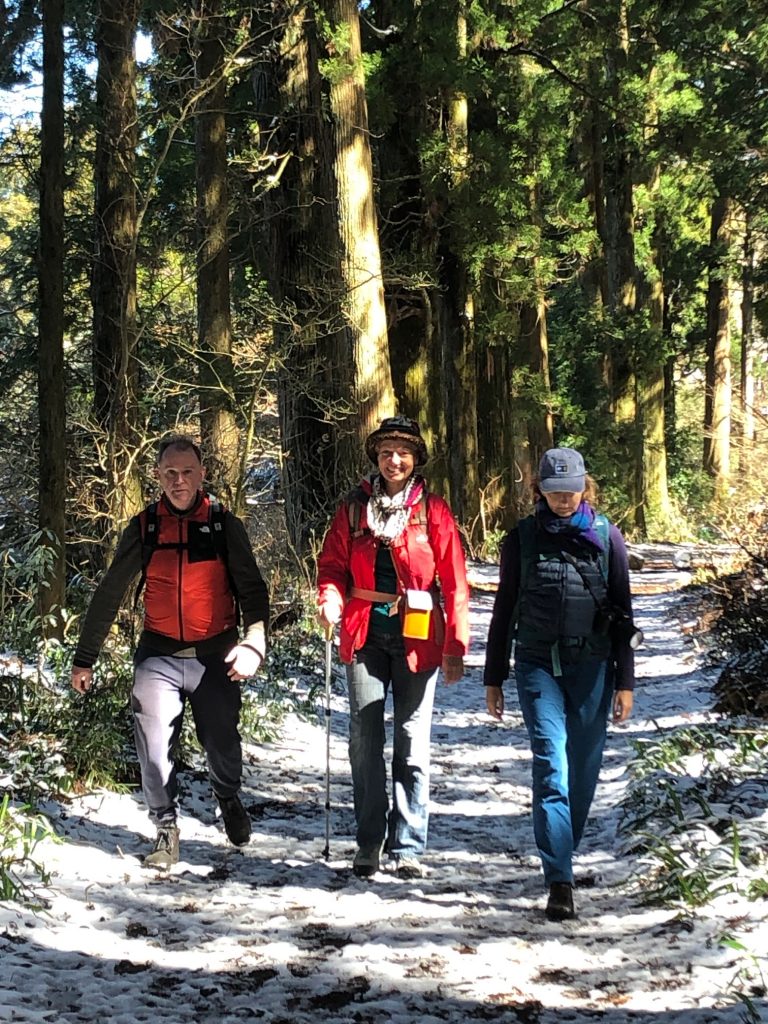 Walking along the old Tokaido Highway near Hakone – my sister Justy is in the middle, Tony Everitt on left and Lou Southerden on right 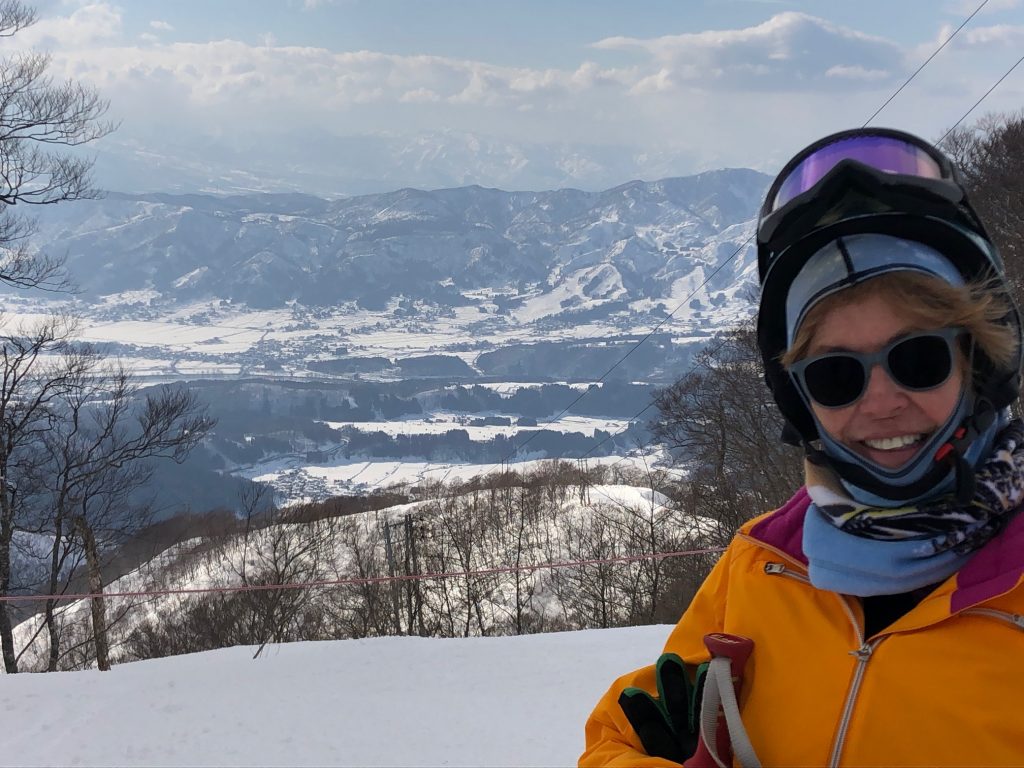 Looking out over Nozawaonsen (Nagano Prefecture) 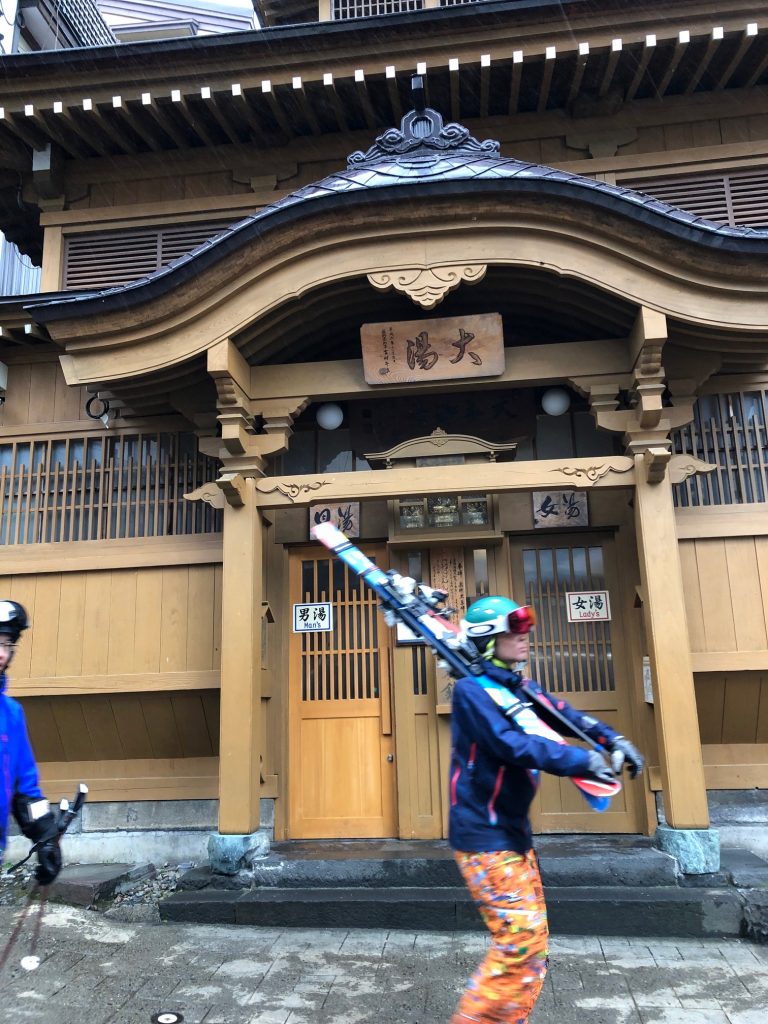 Kawahara Yu public Onsen, Nozawaonsen – Onsens are hot spring baths  which use volcanically heated hot water (or resorts that have developed around the springs)

It sounded like a good plan except that none of us speak Japanese – and few Japanese speak English – which made our late-night arrival at Tokyo Railway Station challenging to say the least.
We’d been told the trains ran seamlessly and were clean and quiet, but trying to figure out how the system actually works and which line to take was another matter altogether.  While the National Japan Railways Group owns roughly 80% of the railroads, the rest are privately owned companies running on different timetables and prices and it took ages for us to work out which train to take.
After navigating our way from Narita Airport to Tokyo Railway Station, still frenetic at 10pm (apparently the daily number of train passengers in the Greater Tokyo Area is approximately 20 million), we were relieved to hail a taxi to the Shiba Park Hotel, drop off our bags and to find a warm, friendly restaurant called Baku, a five minute walk up the road. 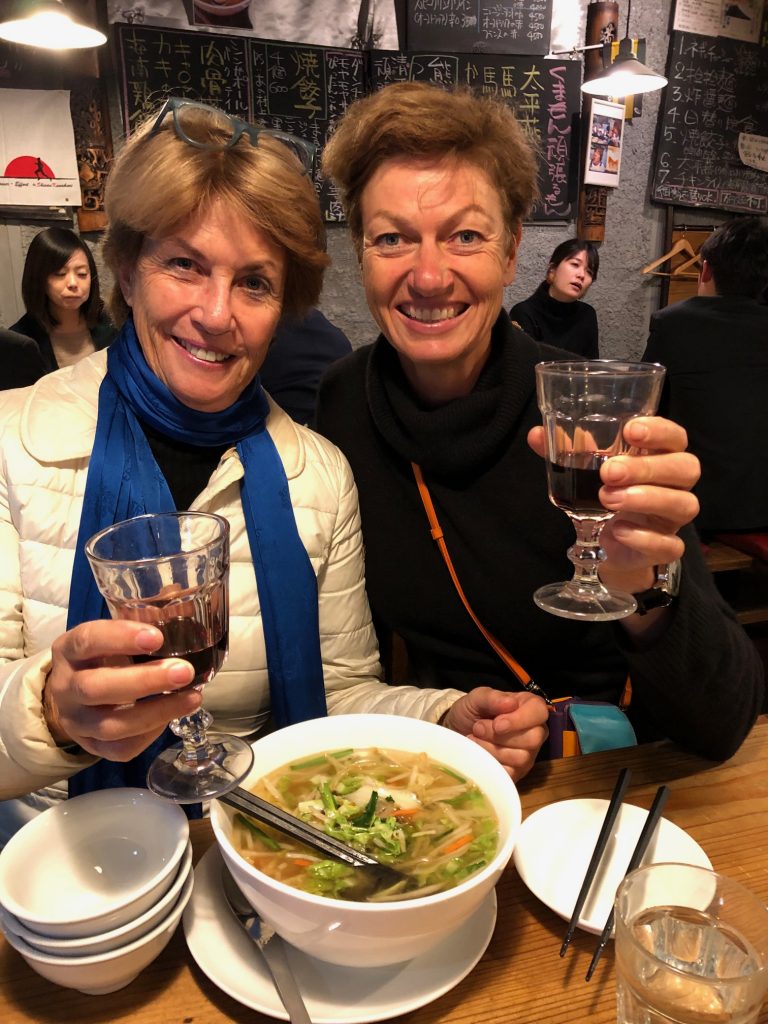 Our hotel, a popular choice for Aussies, was located close to Shiba park in the centre of which stands the impressive Buddhist temple, Zojo-ji. Most of  Zojo-ji’s current buildings are recent reconstructions except for the main entrance gate, built in 1622, which has survived fires, earthquakes and wars.  I was to discover, to my surprise , that many of the temples, shrines and castles we visited in Kyoto (including the glorious Golden Temple), Kanazawa and Odawara were in fact reconstructions and not original. Some observers have mused that these places, like Venice, have become cities of illusion or historical theme parks though I admired the way the old and new have been woven together. 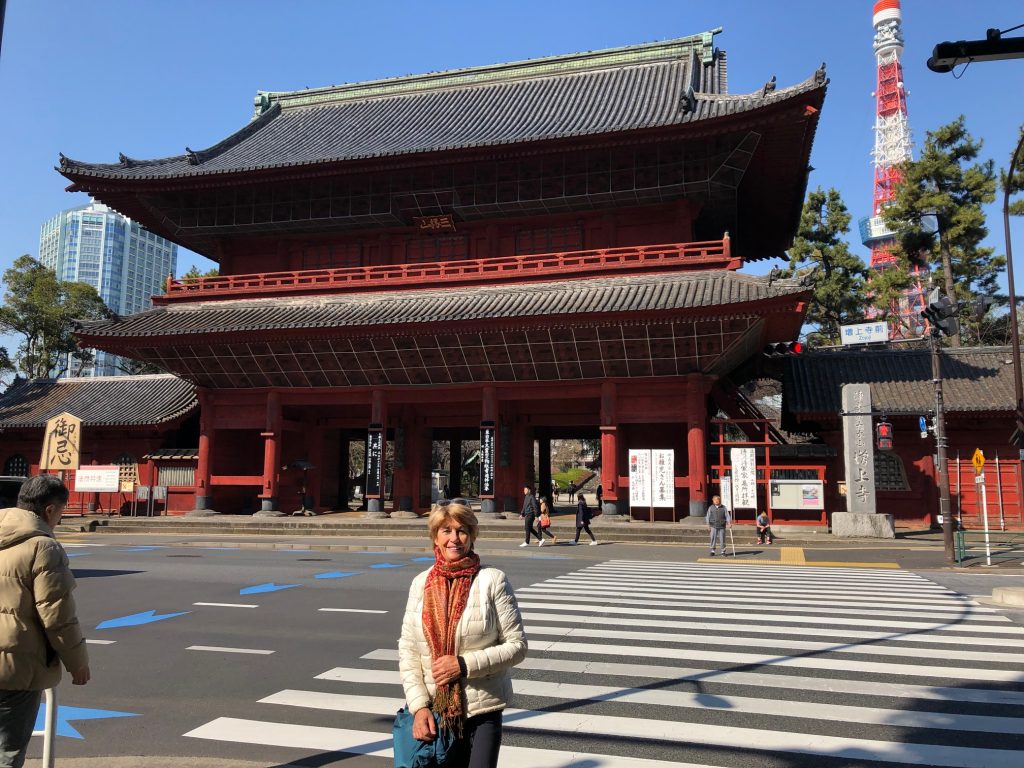 It was at the Zojo-ji Temple that I first came across the memorial Jizo dolls or “care guardians of the deities”, dedicated to the safe growth of children and grandchildren and found them very moving. Their red bonnets and aprons are to keep them warm and protect them. 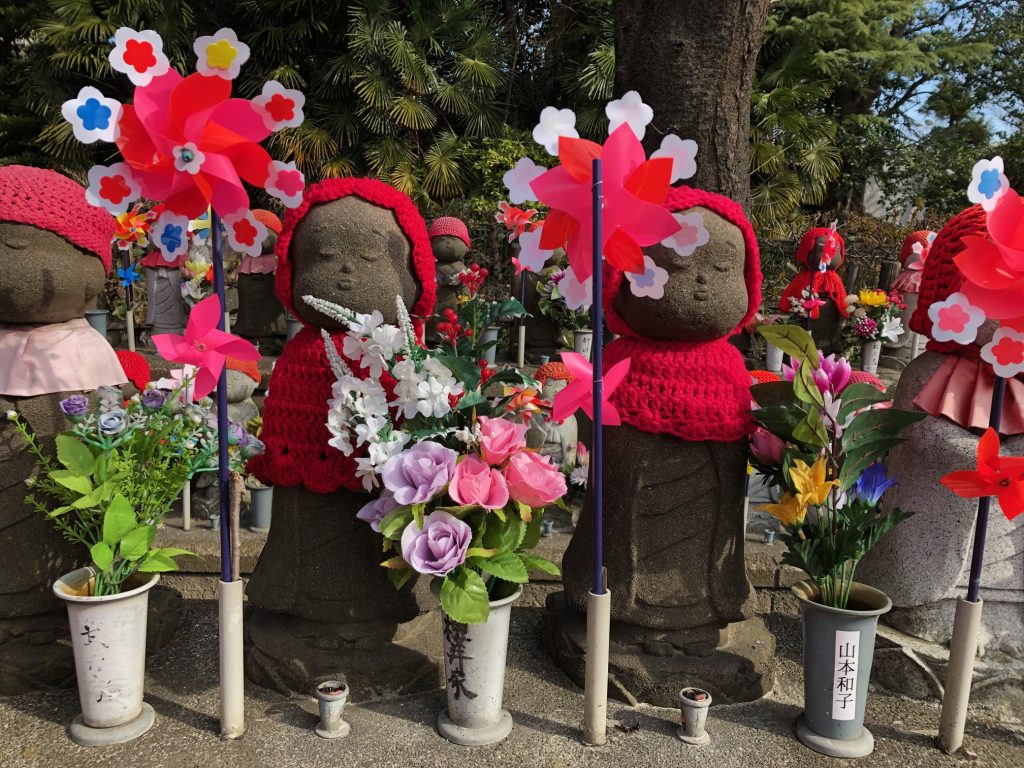 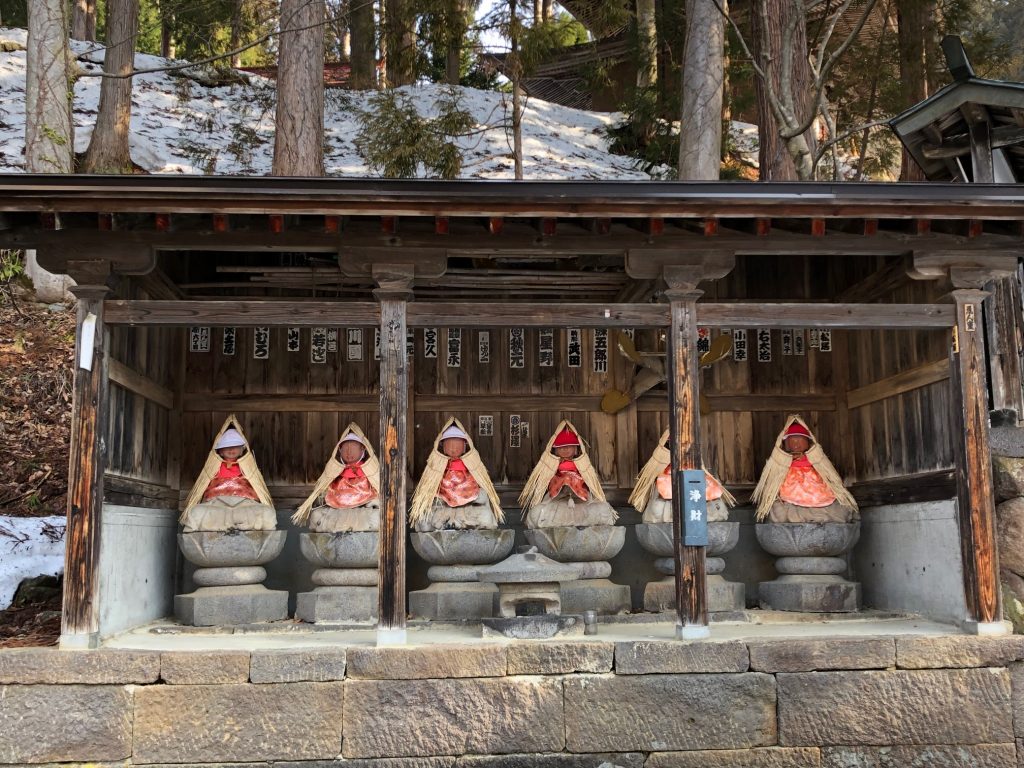 Here they are, rugged up to keep warm, at Nozawaonsen

Behind the temple stands the Tokyo Tower which is 13 metres taller than the Eiffel Tower and a symbol of Japan’s post-war rebirth as a major economic power. 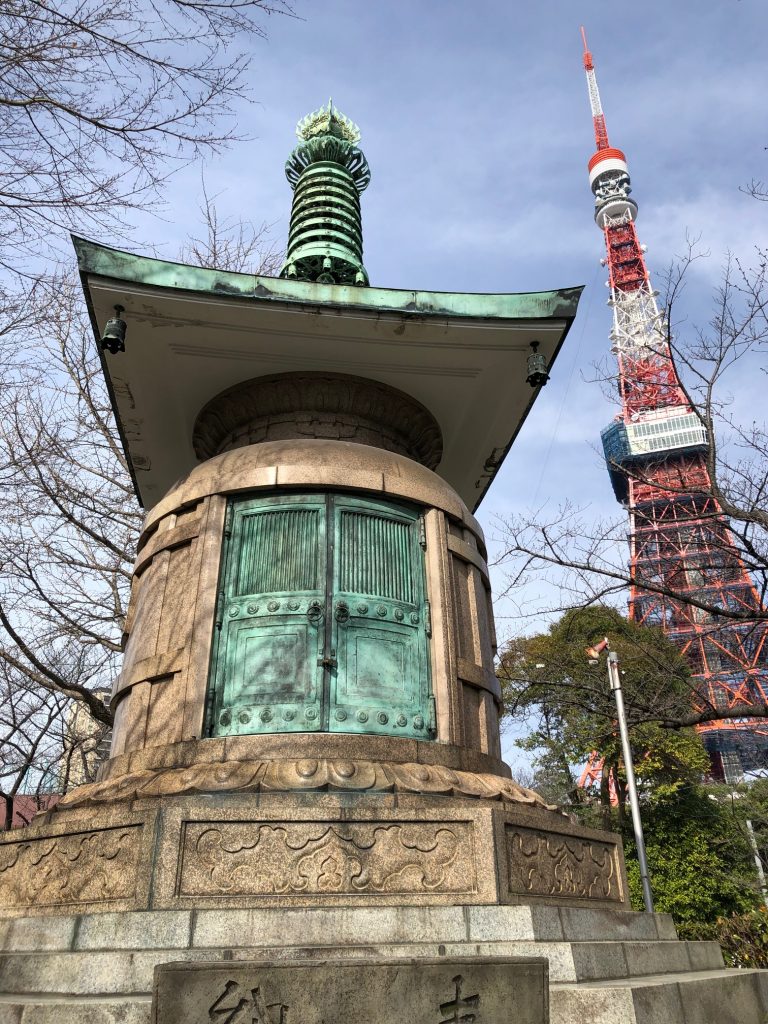 Contrast of the old and new at Zojo-ji Temple

The contrast of the old with the new was striking and links with the Japanese cult of mono no aware (the transience of things), celebrated in the Tale of Genji.
It also connects with a visit we made to Furumaya Guesthouse, a farm-stay located in the Tamba Valley 65km northwest of Kyoto. Run by the delightful Sayaka Perie-Sawada and her French husband Nicolas, this was one of the most eye-opening experiences of my time in Japan, not just because Sayaka and Nicolas speak English (and French), but because their farm and lifestyle offered access to a Japanese way of life rarely seen by tourists. 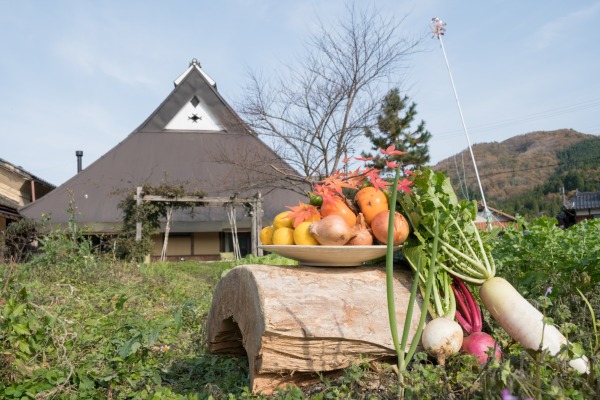 Furumaya Guesthouse with some of the veggies grown in their garden

While Slow Food farm visits are a well-trodden path in Europe and the U.S., few in Japan choose simple and natural over modern and hi-tech. Agriculture, which was once the country’s dominant industry, has declined dramatically since 1960 and now makes up only one percent of the economy.
Unlike most of her contemporaries, Sayaka fled a successful corporate life to live and work in the countryside. Having graduated in chemistry in the U.S. at Grinnell College in Iowa, she then worked for nine years in the academic publishing industry in Yokohama.
“I’d always had a dream of being my own boss by the time I was 40,” she told me. “And I was tired of this consumerist society and wanted to live in nature and grow some food.
“I also love cooking and used to enjoy cooking for large groups.” 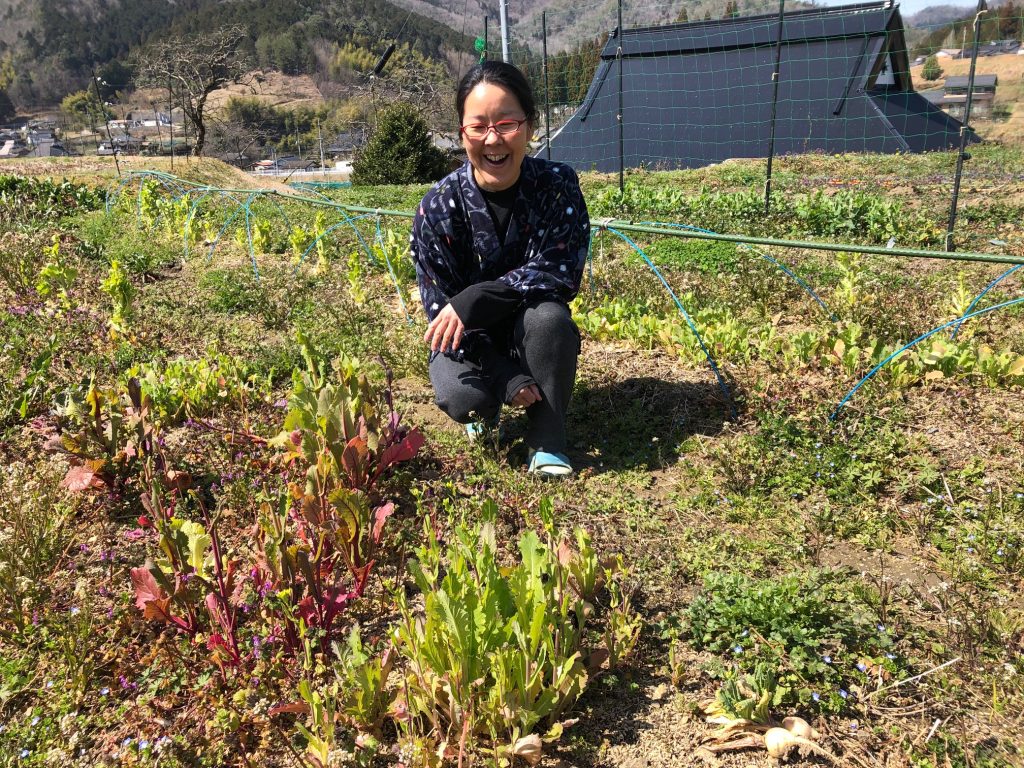 While working in Yokohama, one of her English friends introduced her to Alex Kerr, an American antiques collector and author of Lost Japan and Dogs and Demons. His books are laments for the vanished natural world of Japan which has been overtaken by a tsunami of uglification and industrialisation.
Kerr first lived in Japan when he was 12. His father was in the U.S. military and transferred there in 1964, the year Tokyo staged the Olympic Games (and will do so again in 2020).
According to Kerr, this was a pivotal year when “the imbalance between city and rural incomes passed a critical point, and farmers all over Japan fled the countryside.”
Sayaka’s visit to Kerr’s thatched roof house on the island of Chiiori with a group of friends confirmed her wish to exit corporate life and live in the country.
“It was wonderful.  We could hear the birds. Some of my Tokyo friends had never stayed in an old farmhouse or had this type of experience before.
“Everything became clear to me.  I knew people loved the experience of being in nature so I set about looking for an old farmhouse and fell in love with this 240 year-old one. I make decisions quickly and signed up for it the next day.”
She paused and laughed. 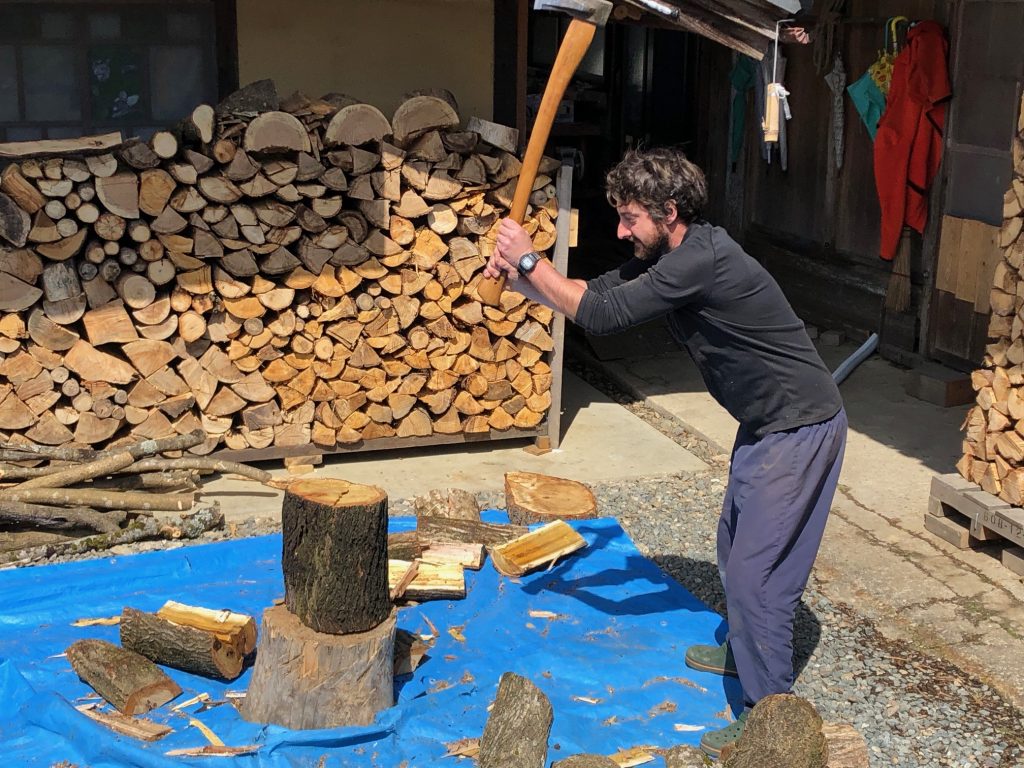 “And then I met Nicolas who came to work as a Woofer (an acronym for Willing Workers on Organic Farms) on the farm from France. At the end of the season we ended up sitting in front of the fire one night and talking for 14 hours.  I’ve never spent that long talking to any man!”
While Nicolas does much of the hard labour around the farmhouse (chopping wood, planting and harvesting the rice) Sayaka spends a lot of her time in the kitchen preparing delicious, elegantly presented meals. While she protests that she’s just a “home cook”, her food was some of the best I tasted while in Japan. 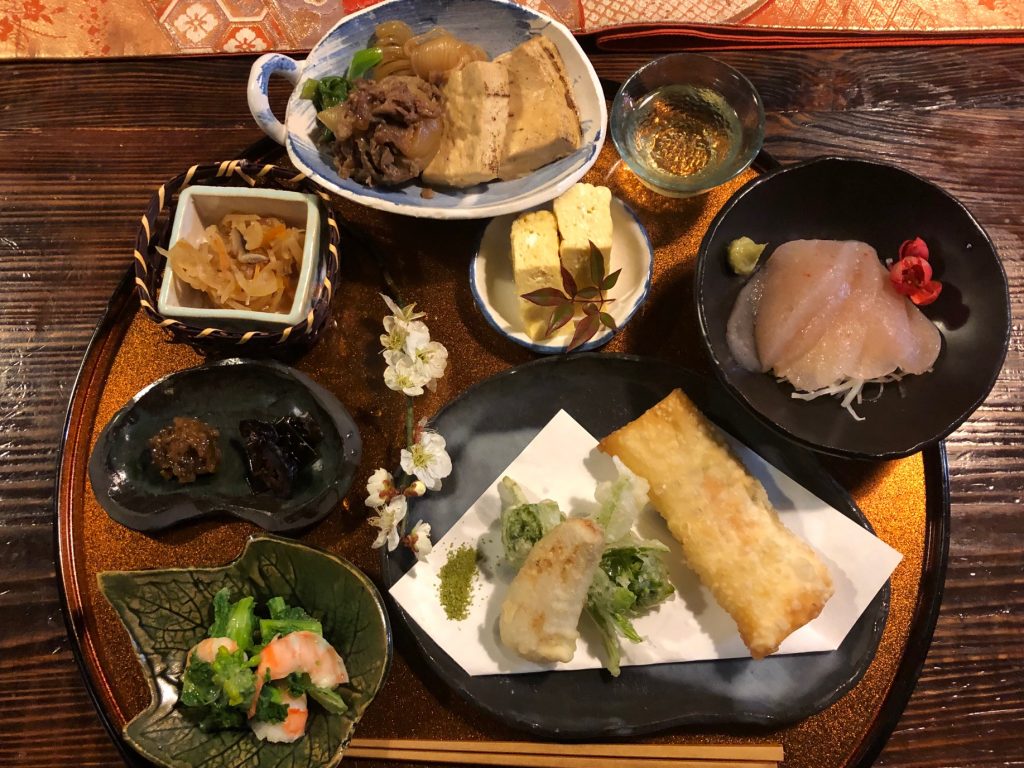 Sayaka’s elegantly presented meal on our first night – yama fugu, made from konnyaku is on the right above the deep-fried spring roll and has been sliced to resemble mountain blowfish

It was she who told me about konnyaku, a gelatinous paste made from the Asian plant Amorphophallus konjac which is formed into bricks or strings and used in simmered dishes or sliced thinly and served as vegetarian sashimi called yama fugu. It is eaten for its chewy texture and fibre, not for its flavour, is very filling and contains almost zero calories.
Sushi rice is grown in their rice paddies. Brown rice is also grown for Aussie guests. Last year they harvested 860Kg rice and aim to grow 1000Kg this year by expanding the number of rice paddies. Turnips, bok choy and daikon radishes are also grown at the farm. 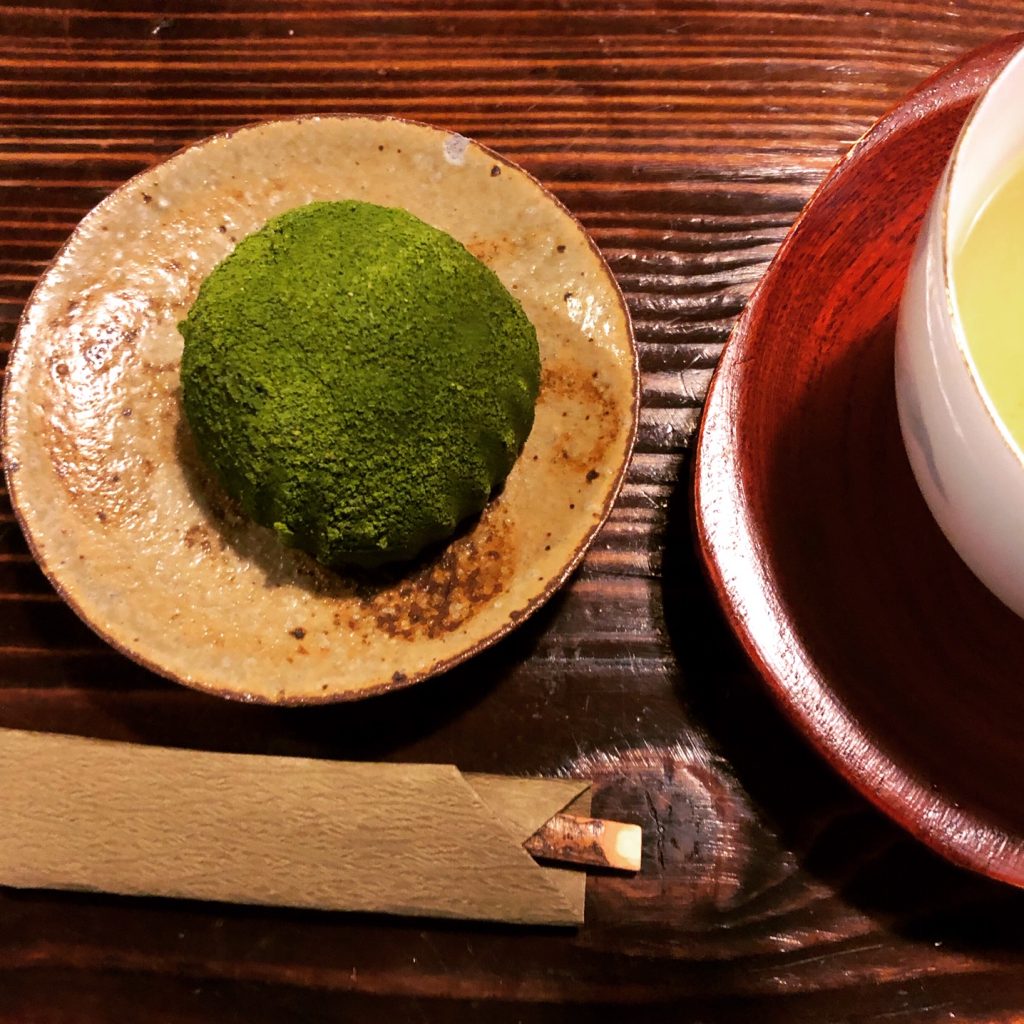 For afternoon tea, Sayaka offered us this divine Matcha Mochi (a sweet Japanese rice cake made with matcha powder and a heavenly creamy filling) with a cup of green tea

Sayaka represents a small but growing group of young Japanese looking for a healthier, more sustainable way of life away from Japan’s neon-soaked concrete jungles.  According to one report by the Ministry of Land, Infrastructure and Transport 23% of participants in their 20s said they wanted greater government promotion for relocation to the countryside. 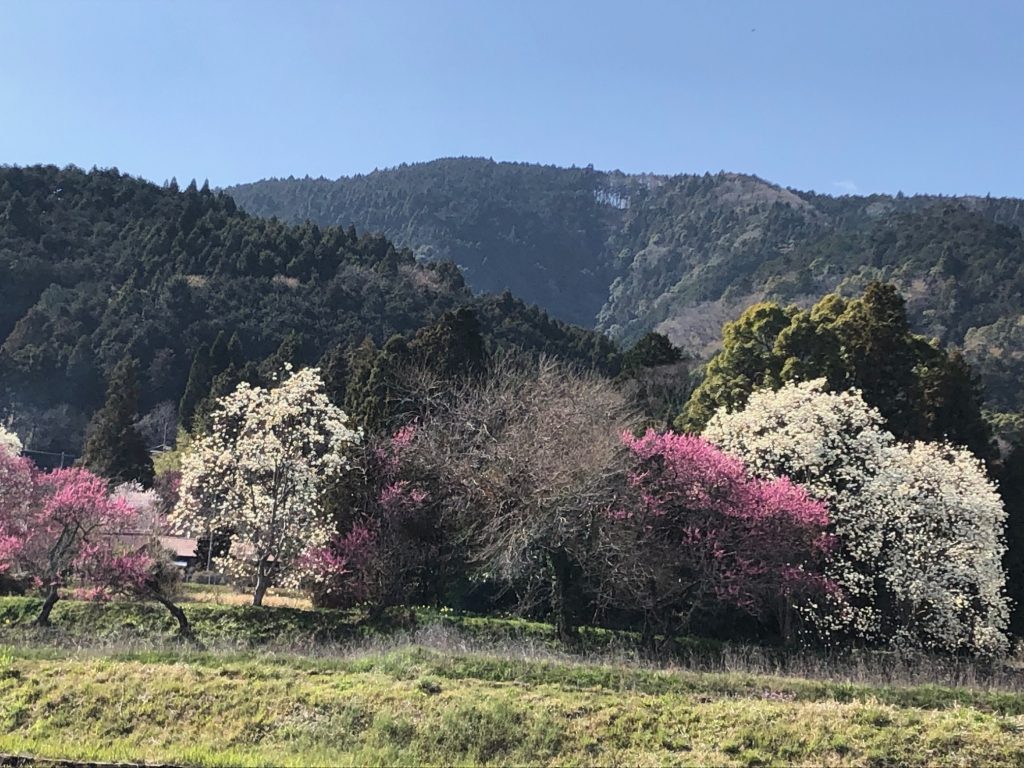 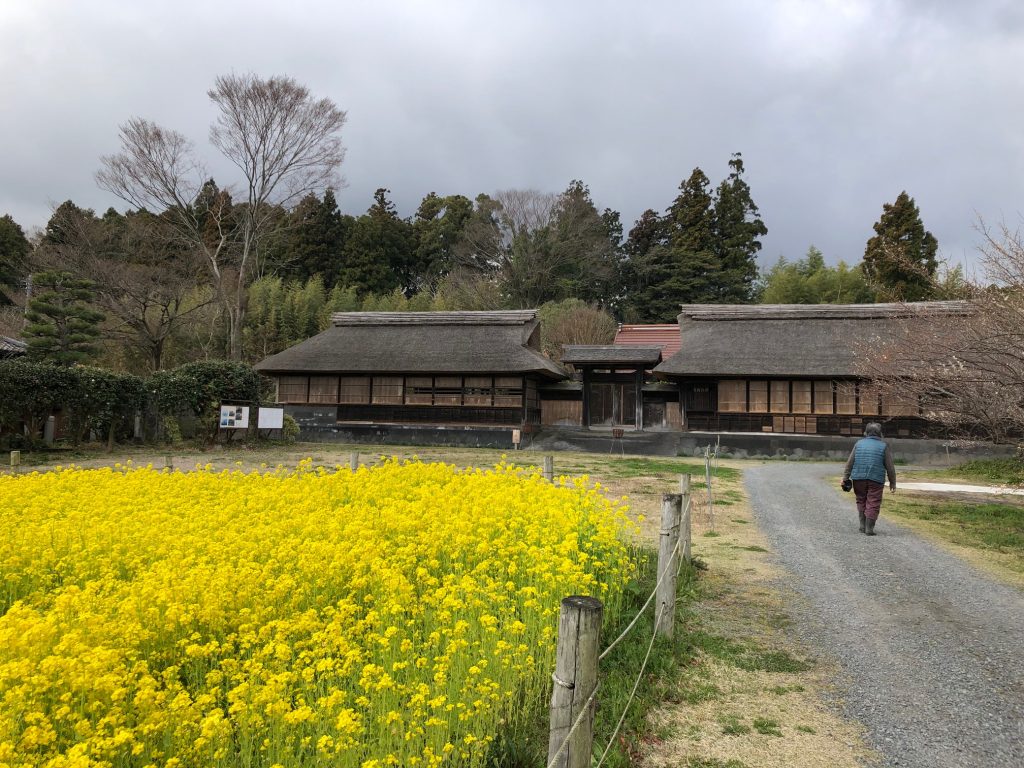 On our walking tour around Mt Fuji, we met a group of young women running a new company called Fuji Eco Tours, whose philosophy coincides with Sayaka’s.  They  grew up in Fujinomiya, a small city on the southwestern slopes of Mount Fuji, studied elsewhere but returned home to start a fledgling business dedicated to helping local people protect their natural and cultural heritage through tourism.
Our walk through the quiet rural backroads around Mt Fuji, which included visiting local farms, shrines, historic houses and a sake brewery was one of the highlights of my visit and reminded me of Alex Kerr’s claim that  many Japanese are missing out on the real beauty of their countryside – and didn’t require grappling with the Japanese railway system. 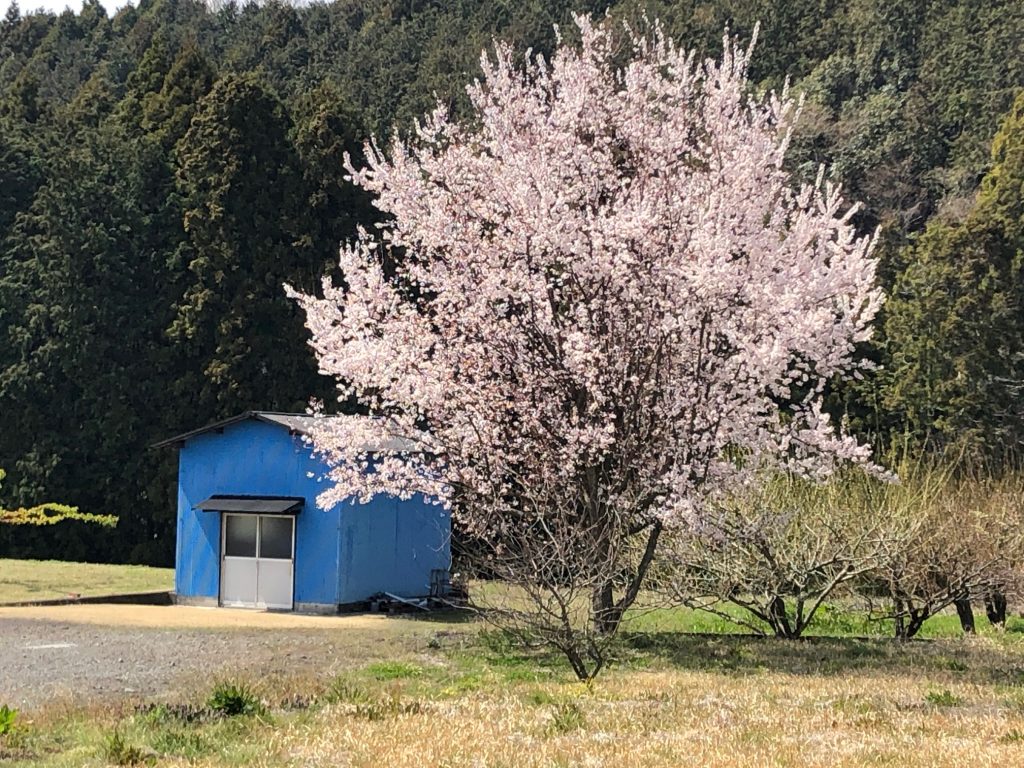 A glorious wild cherry in the countryside around Mt Fuji

We were fortunate to see the loveliness of Mt Fuji from many different angles as we walked along the Old Tokaido Roadand again when we were in Fujinomiya. 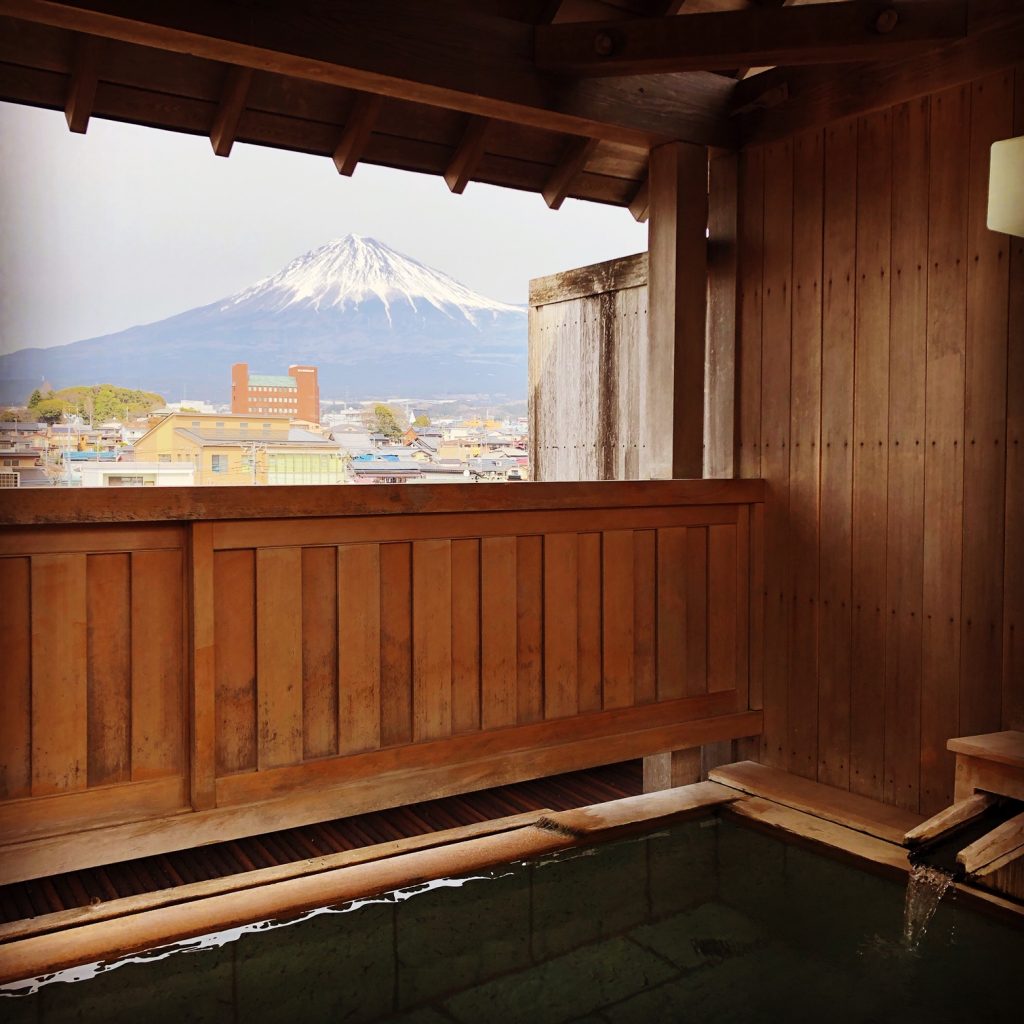 Mt Fuji from the Onsen at Ogawa-sou ryokan, Fujinomiya

We also saw it clearly from the outstanding Mt Fuji World Heritage Centre, designed by contemporary architect Shigeru Ban, where its extraordinary inverted image is reflected in a pool of water. 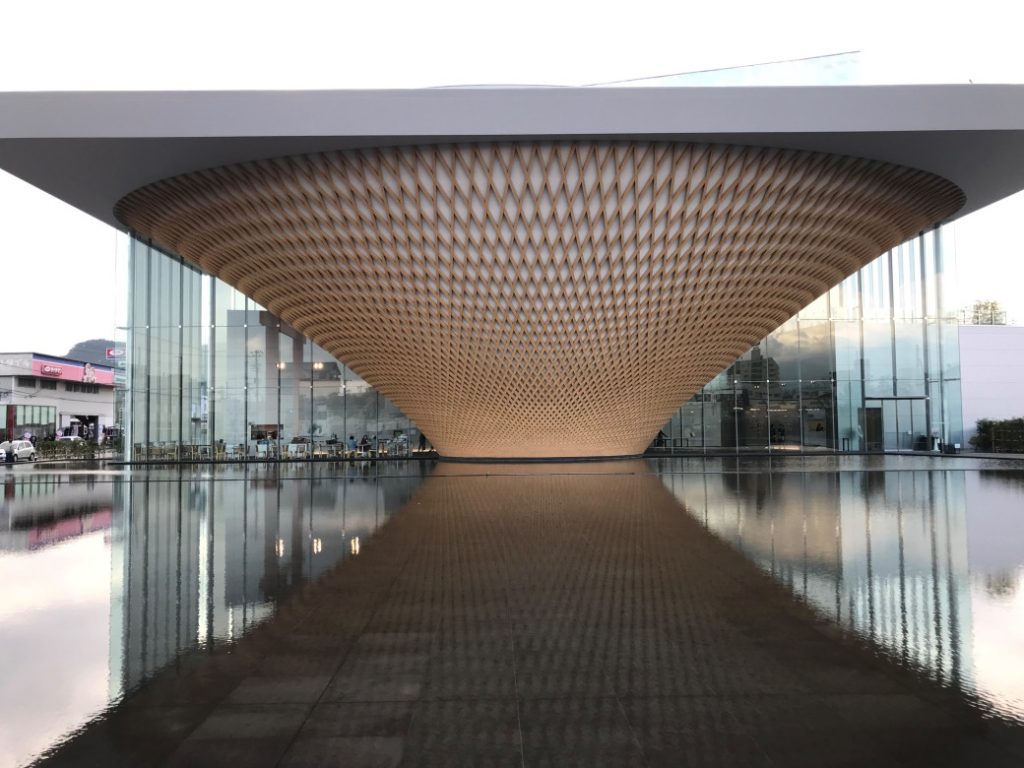 And I thank my sister Justy for waking me up at dawn one day to witness the pink blush of the rising sun move over its snow-capped, cloud-free peak.  It’s an image which will linger with me for a long time. 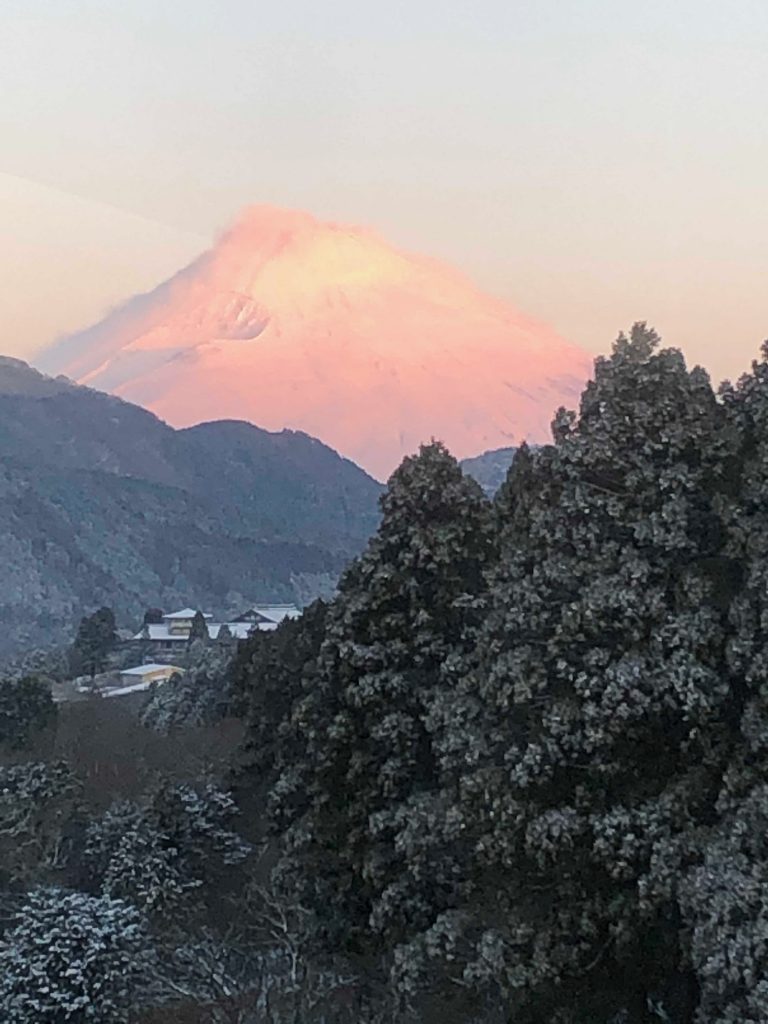 8 Responses to Lost in Japan