The sweet smell of freshly baked biscuits was wafting through the air as we walked along the leafy path to the Savoirs et Saveurs de Montagne market near Gap, capital of the Haute-Alpes department in south-eastern France. 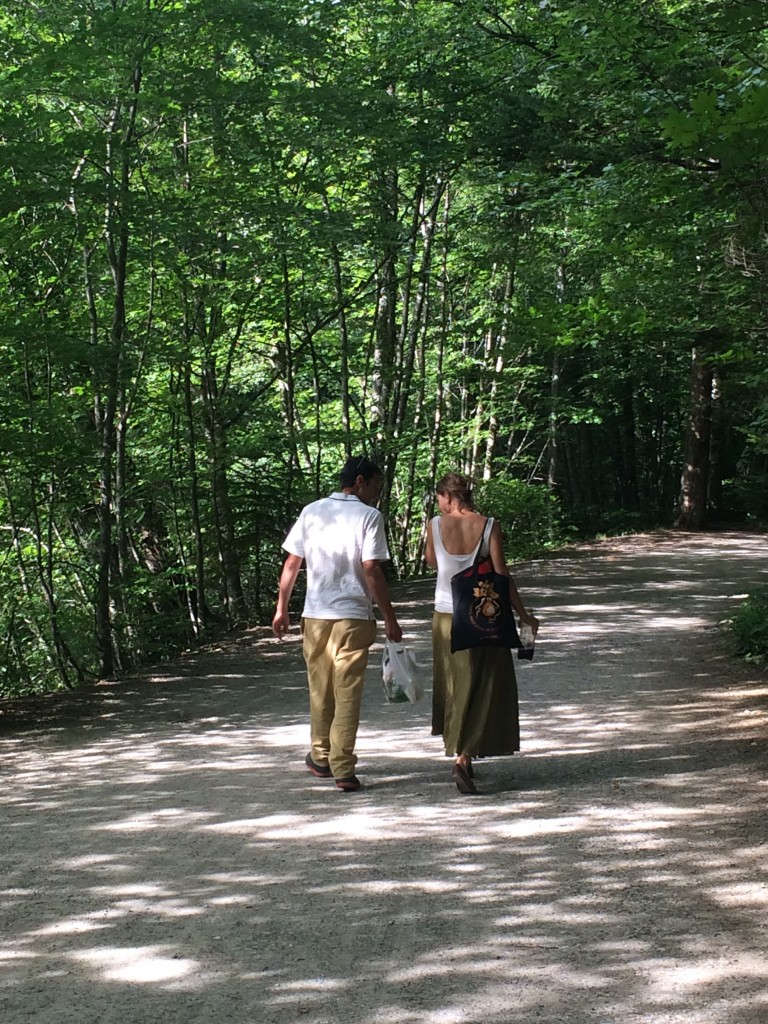 Francois and Maddalena, our tour guides, walking along the path to the grounds of Chateau de Charance where the Gap Slow Food market was held

But it wasn’t until I had passed by stalls laden with local honey, goats cheeses, potted herbs, home-made confitures and nectars de fruits that I located its origin. The biscuits were being baked in an oven set up by the Slow Food organisers in a temporary outdoor demonstration kitchen under the trees at the far end of the market.
Sweet and buttery, they were flavoured with lavender and were made by Sarah Lambert, an English woman who is a member of the local Slow Food group and who moved to Venterol, a small village in in Drôme provençale 20 years ago with her husband and son. 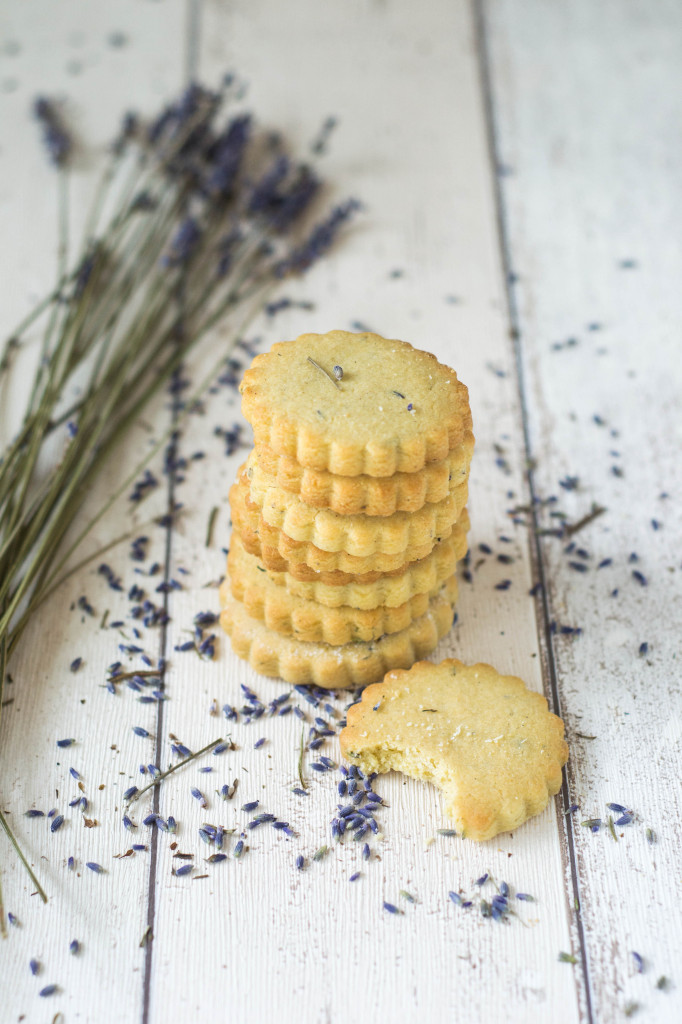 So you can imagine my surprise when she told me that the recipe is from the Yuulong Lavender Estate in Australia.
“The French don’t usually cook with lavender,” she said. “So I’ve sort of made it my mission to introduce them to lavender biscuits. More is creeping in. You can find lavender ice cream, apricot jam with lavender and sometimes incorporated into savoury dishes as well but, for the moment, they are quite reticent about ‘new’ combinations and tend towards the classic.”
It’s not just cooking with lavender which the French find odd.  Slow Food is also a foreign concept.
“There are only four or five Slow Food groups in France,” said Philippe Rostain, the driving force behind the local Gap group.
“This group started with a personal network and grew through the idea of sharing our experiences. We set up 12 years ago and now have 100 members.
“These markets give producers the possibility to talk to consumers and educate them about flavours and taste.” 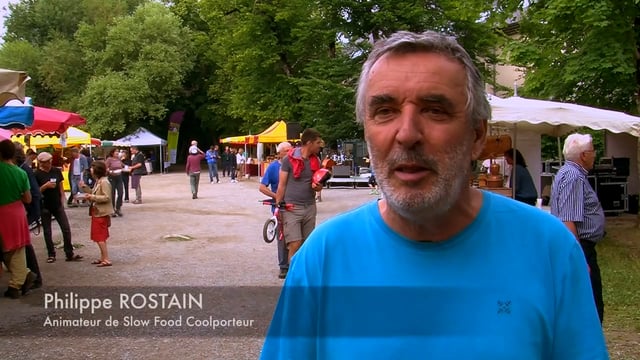 One thing they’ve noticed is that the taste of bitterness is disappearing from gastronomy.
“Belgian endive, for example, has become less and less bitter,” he said.
“In France, people think they know a lot about food, and we’ve had AOC (appellation d’origine contrôlée) protection for our food and wine since the 1930s.
“It’s difficult to get young people involved because they don’t have the ‘sharing’ attitude.
“I like the mixture of responsibility and pleasure in Slow Food.  Why think negatively when you can think positively?”
That attitude was very apparent a few days later when we visited a group of lively fishermen at Martigues on the Caronte canal which links the Étang de Berre (a large pond) to the Mediterranean. Despite polluted waters from surrounding petroleum refineries and decreasing fish stocks  (mainly mullet), these fishermen maintain a gritty sense of humour. They are one of very few left who follow an ancient form of fishing known as peche au calen. 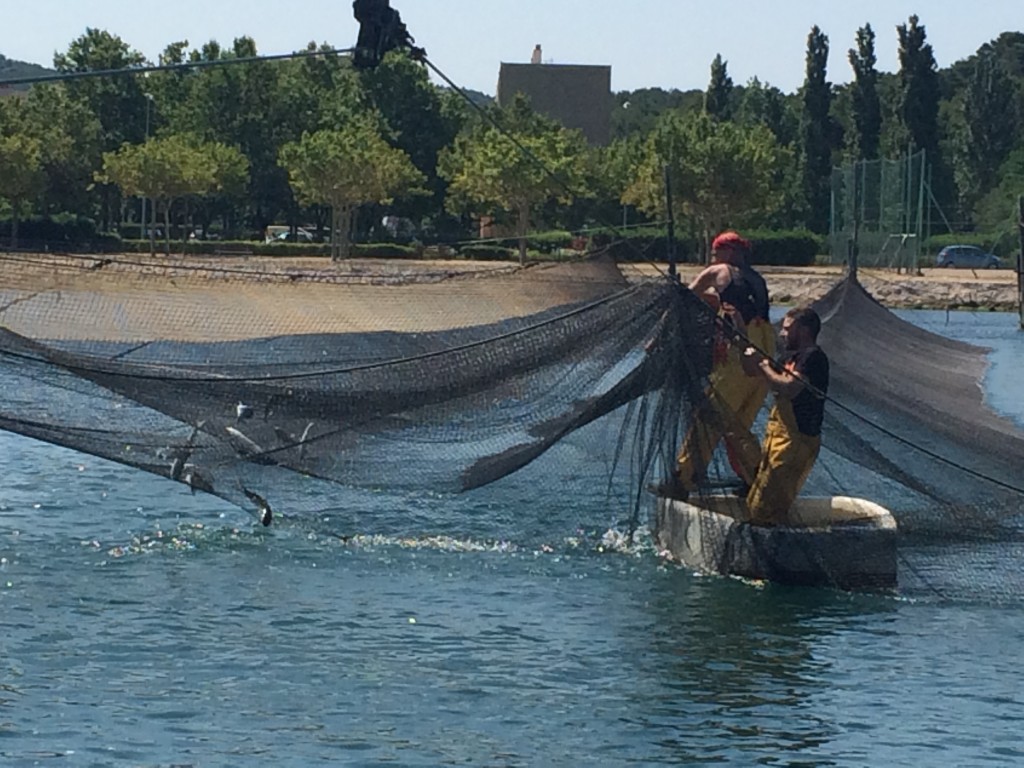 I sat mesmerised as huge nets were stretched out along the bottom the canal to the other side, and the men paddle out in flat-bottomed boats to pull in the fish. Today, a mechanical pulley and cable system is used. Originally the nets were thrown by hand, requiring stupendous effort. I’d never seen this way of fishing before. Depending on the current, the  fishermen usually put in a 12 hour day.
They spoilt us with a fabulous lunch of barbecued mullet, some with the roe still attached.  With the roe they make bottarga, also known as caviar de martigues, which is highly  prized and sells for up to 180Euros/Kg.
The fishermen remove the blood and veins from the roe then press, salt and dry it. Some think the Phoenicians brought the technique with them when they settled Marseilles.
The dried bottarga is good grated over pasta, salad or tuna carpaccio. 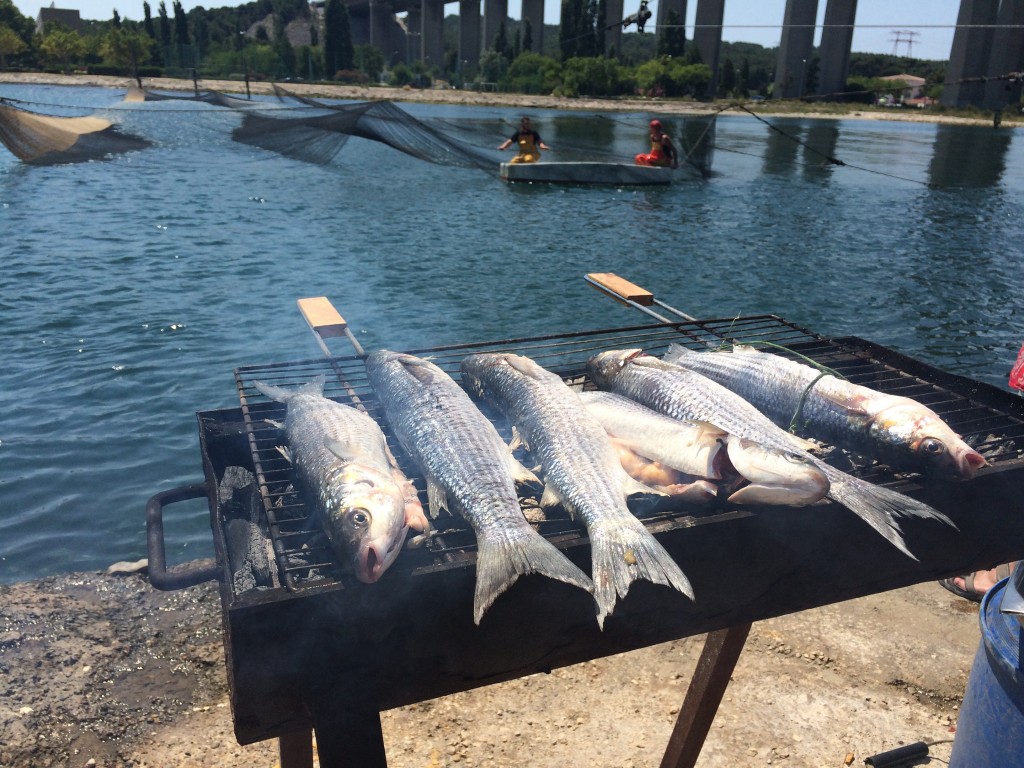 Barbecued Mullet, on the Caronte canal at Martigues

Six species of mullet are caught in the nets, the black mullet being considered the best. Because Martigues is a communist city, the mullet are sold for just one Euro each once the roe has been removed.
We were introduced to the fishermen by Nadia Sammut, a well-known local chef  who specialises in gluten-free cooking or cuisine libre (more about her in another blog). Nadia’s grandfather used to work here when the fish were far more plentiful. 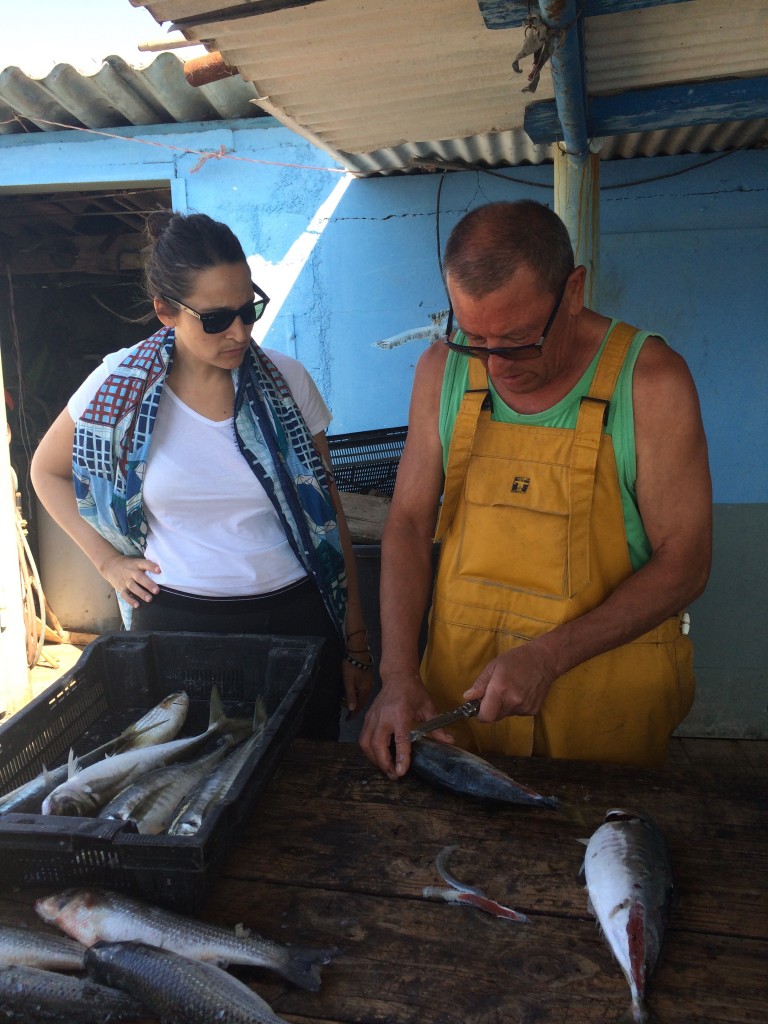 Nadia Sammut with Josie Ortiz, cleaning the mullet and removing the bottarga

I was in for another surprise when we visited La Ferme du Riou, a lavender farm on the Valensole plateau in Haute-Provence.  Here, I discovered, that the sea of deep purple which stretched for as far as the eye could see was lavandin, and not lavender, which  grows at a higher altitude, and that lavandin is not true lavender but a cross between L. angustifolia, commonly known as English lavender, and L. latifolia, or spike lavender.
Lavandin is a hybrid which grows from cuttings with larger flower heads whereas lavender only grows from seeds. From the lavandin flowers, an essential oil is distilled which has some similar properties to the oil from English lavender, but is a different chemical composition.
Its strong, fresh, camphor-like aroma almost knocked me out. 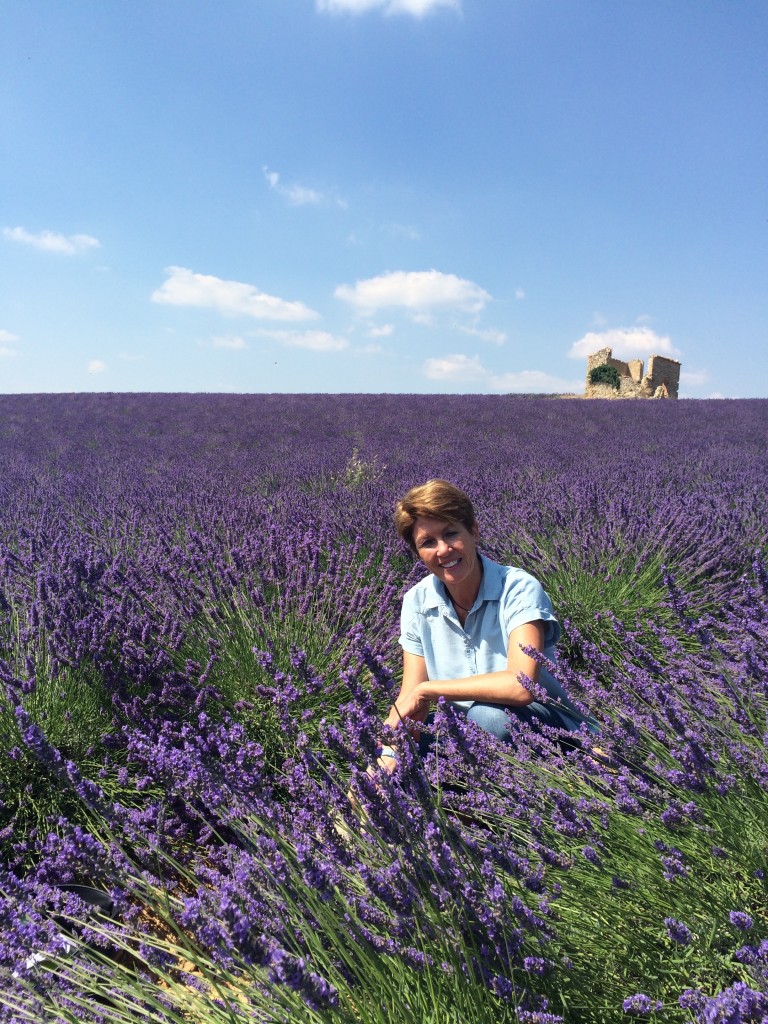 Knocked out by the lavandin at La Ferme du Riou, Valensole

At La Ferme du Riou the lavandin stems and flowers are harvested and left to dry in the fields for 3 -4 days and distilled in two big old alambics (alchemical stills). Most of the oil is sold through a local co-operative and to large cosmetic companies.
Yet more surprises were in store at Les Escargots du Verdon, a snail farm about 30 minutes from Valensole. run by Pierre and Agnes Leonardi.
It wasn’t just the way they reproduce (snails are hermaphrodites which means that every snail has both male and female reproductive organs), but  Pierre’s disclosure that he collects 30 tonnes of slime per year, most of which is sold to L’Oreal, the French cosmetic company.
“In some places they even put live snails on your face,” he added with a smile. 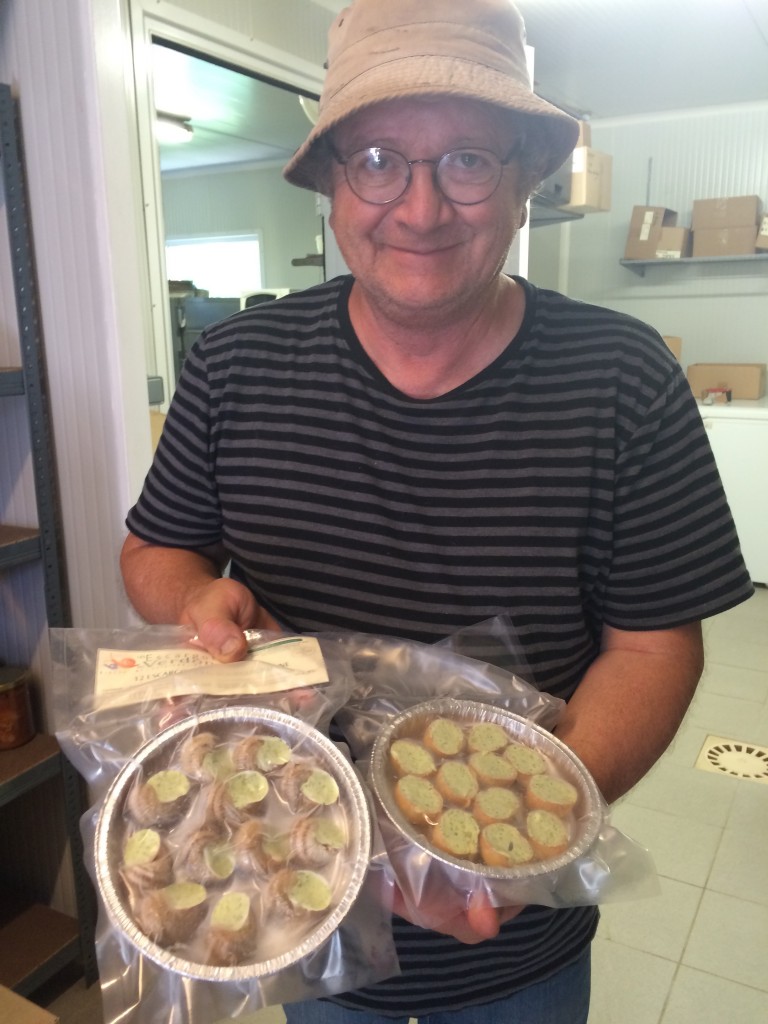 Pierre Leonardi with some of his snail products, pre-packaged for restaurants

Apparently the snails leave a trail of mucus which contains beneficial proteins, anti-oxidants and anti-bacteria which is great for anti-ageing.
Hmmm…years ago it took courage on my part to try garlic snails (a pre-prepared and pre-packaged product which Pierre sells to restaurants) but the thought of snails crawling over my face really gives me the creeps, despite all those alleged anti-ageing benefits. 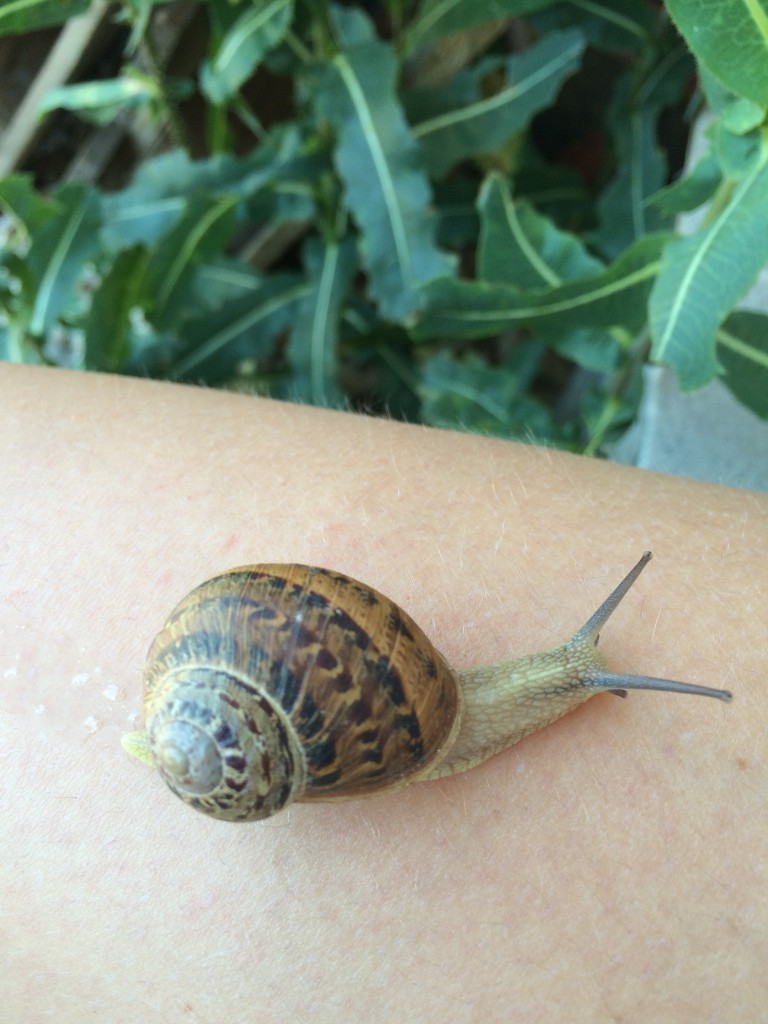 Do I really want snails crawling over my face?
Would you?