King Louis XIV  liked asparagus so much that he asked his gardener La Quintinie to grow it in mid-winter. 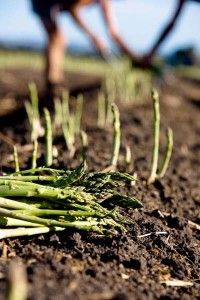 Nothing could daunt the great gardener and he set aside many “hot beds” for asparagus crowns, forcing them to shoot throughout the cold months.
Perhaps it had something to do with its long-standing aphrodisiac reputation that the French king liked it so much – indeed it was banned from the tables of 19th century nunneries! – or maybe it had something to do with asparagus being called “the aristocrat of vegetables”.
A member of the lily family, fresh asparagus has long been prized in Europe, the United States  and Japan, yet in Australia most people have only ever tasted the canned variety.
Australians consume just 2 bunches per capita per year of fresh asparagus – though the good news is that fresh asparagus now outsells canned asparagus.
“It’s not because people don’t like it,” says Ian Nielson, director of Asparagus Australia and manager of Miandetta Farms, Warwick, south-eastern Queensland. “It’s because they don’t know how to cook it, let alone how sweet it is when just picked and eaten raw.
“You don’t need sugar if you stir your coffee with an asparagus stalk! ”

How it is Grown

Most of us have little idea about how it’s grown either. On a visit to the Nielson’s asparagus farm, we set about finding out.
As we drove toward the farm, an early morning fog had settled over the low lying flats outside Warwick making it difficult to see ahead.  It slowly began to lift revealing hundreds of sparkling spider webs in the bushes beside the road.By the time we arrived at the farm, the sun was up and there before us lay hundreds of neat lines of mounded soil through which thousands of asparagus spears had pushed their way up.Asparagus thrives in the cold and the high plateau around Warwick in south-eastern Queensland is a perfect micro-climate.
There are seven other asparagus growers around Warwick, 150 hectares in total,  and three packing houses. Sixty per cent of Miandetta’s crop is exported to Japan, Korea, Singapore and Taiwan.Another high altitude area at Munduberra, north of Kingaroy, is also planted with asparagus. Asparagus is also grown in Mildura, Jugiong and Cowra in NSW, the latter being on the original old Edgell’s blocks.
Ninety three per cent of Australia’s total asparagus production is grown in the Koo Wee Rup and Dalmore area of Victoria, fondly names “Asparagus Country.”  Sixty per cent is sold fresh on the domestic market while 40% is exported
“It’s an expensive business setting up an asparagus farm,” says Nielson.
The distance between rows is about 2 – 3 metres. In Europe the soil is earthed up even higher so that the spears will remain white. Most of the aspoaragus grown here is green with a small amount of white and very limited amount of purple (available in November).
Asparagus likes a well-drained soil.  At Miandetta, there’s a mixture of heavy clay and light sandy soil and soil analysis is carried out on a regular basis by a consultant agronomist.  Asparagus requires a lot of boron and nitrogen and fern samples indicate any deficiencies. Composting the paddocks is essential at the end of each season – at Miandetta, the nutrient-rich effluent from the nearby piggery is used. Zinc and boron are added as a foliar spray which is absorbed through the ferns which spring up at the end of the season. During winter, the fern is burnt off by frost,  allowing the crown to store essential carbohydrates.  The ferns are then slashed and burnt to remove any remaining stubble.Spears are not ready for picking until two to three years after the crowns have been planted and the beds remain productive for up to 20 years.  During summer, spears can grow as much as 25cm overnight and need to be cut twice a day so that they don’t go to seed.

When buying asparagus, look for crisp green spears which are uniform in size . Try to avoid asparagus with a lot of woody stem: if the spears look withered, the asparagus will be dried-out.
Really fresh asparagus should exude a little juice when you press the base of the spear in your fingers. To store, stand the bunch in three centimetres of water and store in the refrigerator.Change the water frequently – or keep in the vegetable Change the water frequently. Or keep in the vegetable section of refrigerator wrapped in a damp cloth.

How To Cook Asparagus
Ian’s wife Kathy, who is a partner in the businnes works in the office one day a week, is a whiz when it comes to cooking asparagus and she gave us the following tips:
Snap off any woody ends.
Large asparagus are best peeled about 5cm upwards from the base.  The thinner variety can be left un-peeled.
The simplest way of cooking asparagus is in a wide frying pan of lightly salted boiling water – or steamed over a saucepan of boiling water. Depending on its thickness, cooking time will vary from two to six minutes.
If you microwave them, add approximately 1/2 cup water to the MW dish and microwave on high for two minutes (or one minutes for pieces) then stand for two minutes before serving.
Serve drizzled with melted butter or extra virgin olive oil.  A few parmesan shavings over the top are a nice addition.
They’re also excellent stir-fried, cut into 2cm – 3cm lengths, tips left whole.  Stir fry in hot oil over medium high heat until done to your liking.  Drizzle with oyster sauce.
Or try them on the barbecue or char-grill.  Spray with olive oil and turn occasionally until lightly coloured.

3 Responses to Sweet Spears of Sunshine