I wonder what the twisted, gnarled old olive trees on the island of Lesvos in north-west Greece would tell us if they could speak. 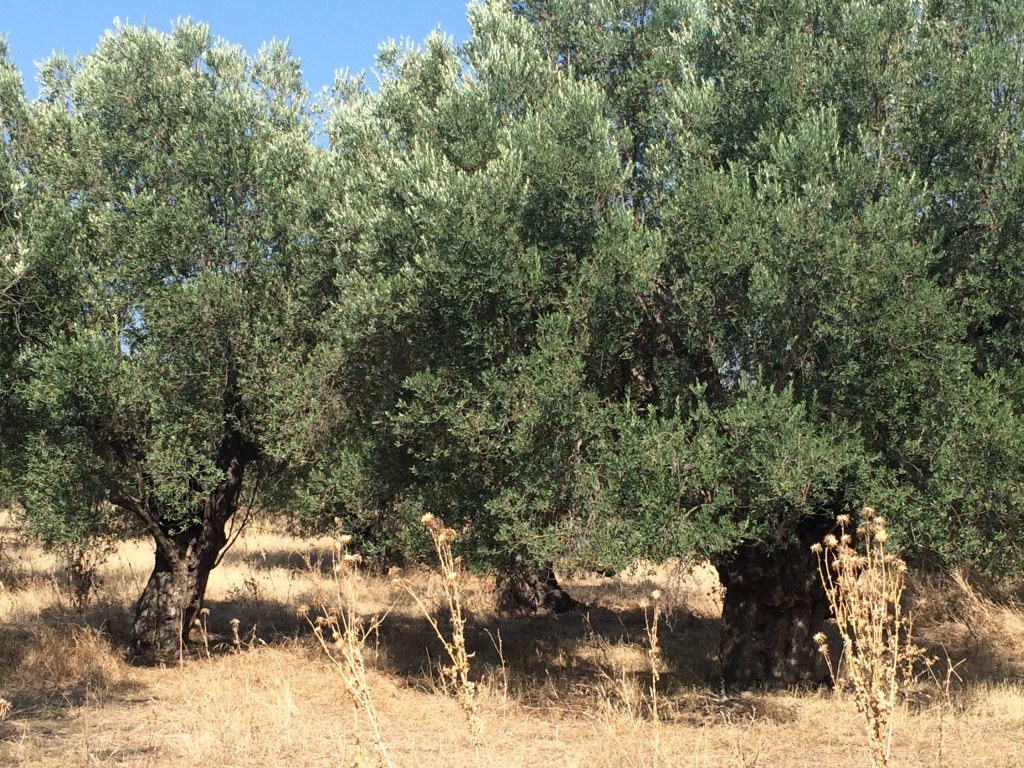 Many of them are centuries old and grow in ancient groves in deep, undisturbed soil.
They yield glorious golden-yellow extra virgin olive oil with a smooth, velvety taste, and also win numerous international awards.
Last weekend, The Independent newspaper featured the Avlaki brand, a light, mellow yet lively oil from Agatheri Groves in its list of 12 best olive oils.
According to The Independent, it’s only ever harvested in December, when the fruit is riper, and there’s never any mixing across the harvest season, which means that the fresh-milled flavour is undiluted. 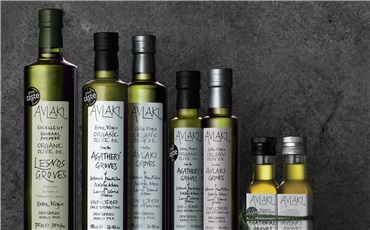 At the New York International Olive Oil Competition held in April this year, a new brand called Acaia made from the Kolovi olive variety and produced in the southern part of Lesvos won a Gold Award.
There are 11 million olive trees and 87,000 people on Lesvos which means 126 olive trees per person, a far higher proportion than anywhere else in the world (in the rest of Greece, the proportion is 9.5 per person, in Spain 5.4, and Italy 3).
Early one morning, before the blistering heat of the midday sun had hit, I went with Harry Chondros and Evi Mitchell to one of the olive groves owned by his family near the village of Agia Paraskevi in the middle of the island. 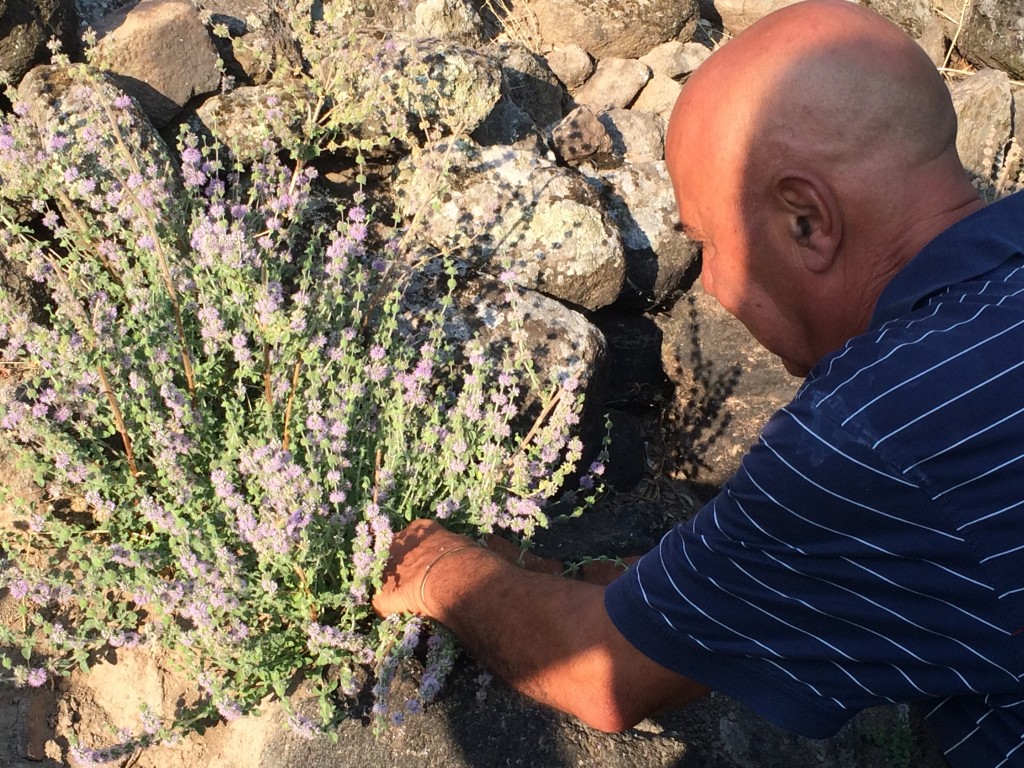 Many groves are located on mountains or in hilly regions and can only be reached on foot or by donkey which means the olives have to be hand-picked. 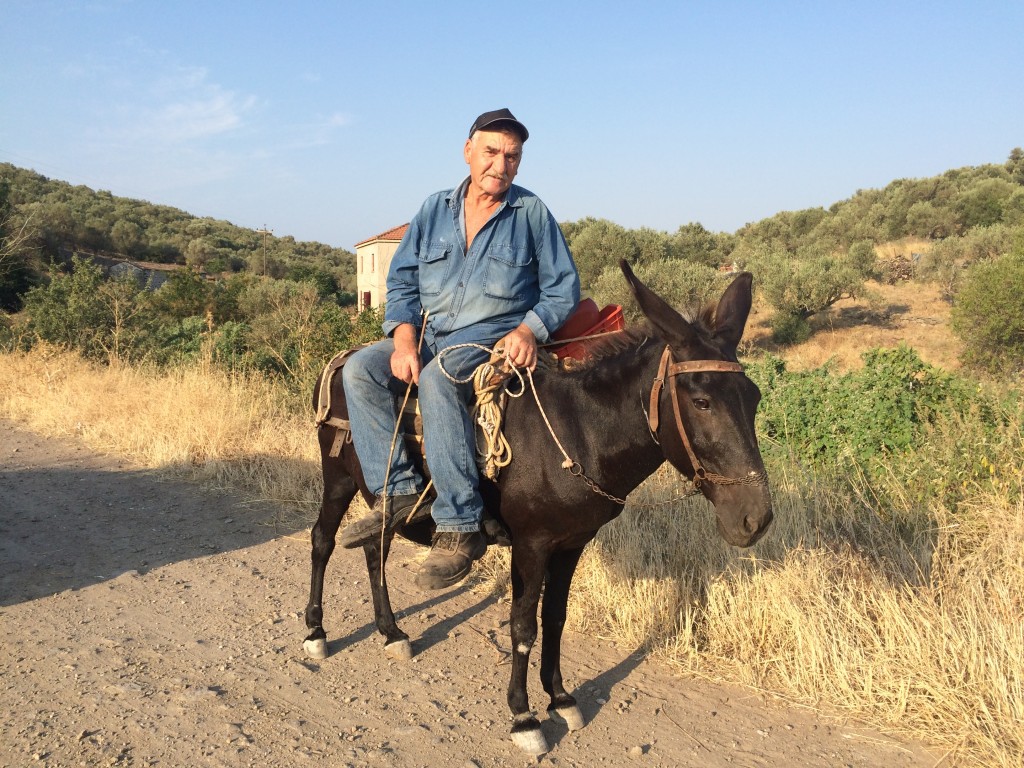 Fortunately this grove was easily accessible, and it was under the trees there that Harry and Evi showed me where the famous oregano from Lesvos grows.
Bags of dried oregano are sold all over the island, and most Aussie Greeks pack  zip-lock bags of it to take back home to Australia because its flavour cannot be reproduced elsewhere.
He also showed me where the wild mint grows in an old stone well built by his father many years ago and where the goats and sheep nibble on the wild orchid stems, chomping them down to the ground. 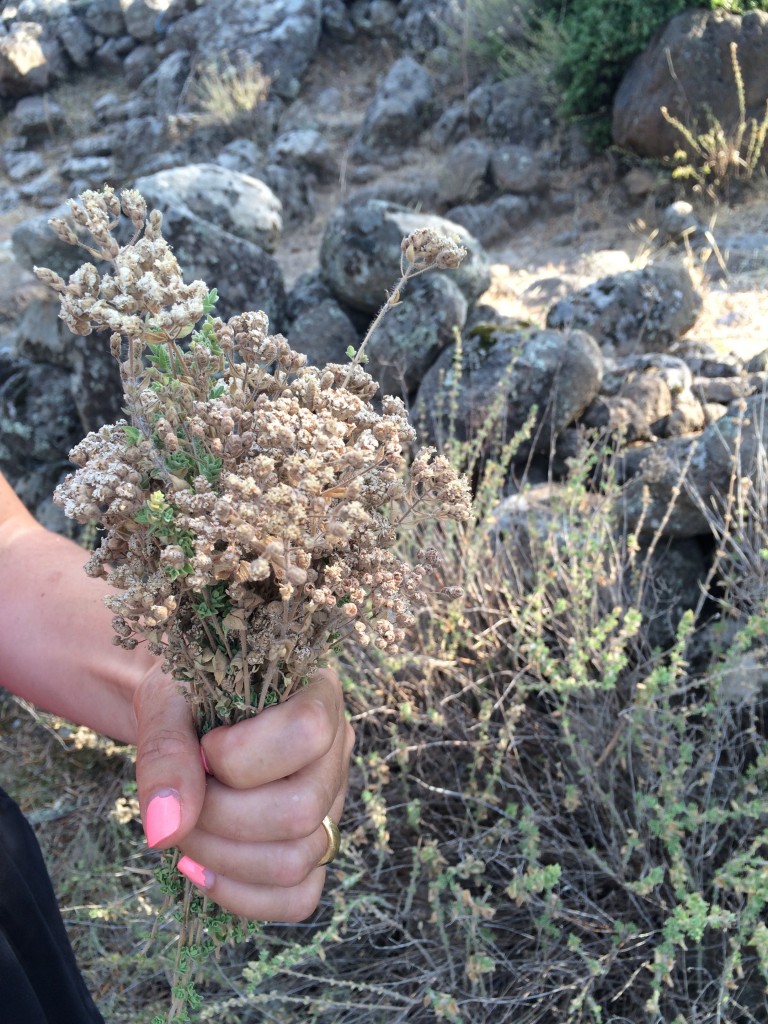 One of my reasons for coming to Lesvos was to do a research project for my ethnobotany class at UNISG in Piedmont. But alas, I would have done better to arrive in spring when the hills and mountains are covered with fresh green herbs and red poppies.
Locals also told me of a book called Plants of Lesvos written by Maki Axioti, a surgeon at Mytilene Hospital, but the book is in Greek and no longer available. 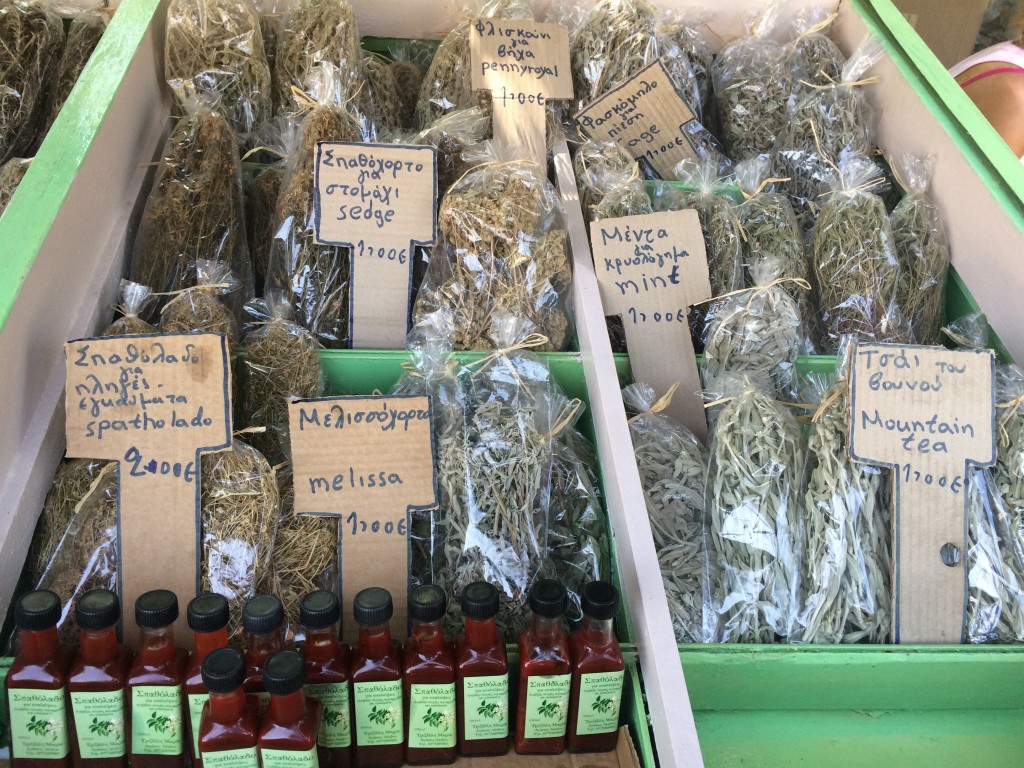 Dried mountain herbs for sale at the Sunday market in Agiassos

On another day he kindly took me to visit Anastasia and George Moutafi, relatives who have a summer farmhouse near the Gulf of Kolloni. Their daughter Effie had just returned from Toronto for a holiday and they were celebrating with a traditional Greek lunch. What an eye-opener!
The house is set in amongst a grove of 250 olive trees which bear fruit every second year. A large vegetable patch yields flavoursome tomatoes, eggplants, beans, zucchini and watermelons.
We sat under a large palm tree while the cicadas roared around us and chickens wandered in and out under our feet. 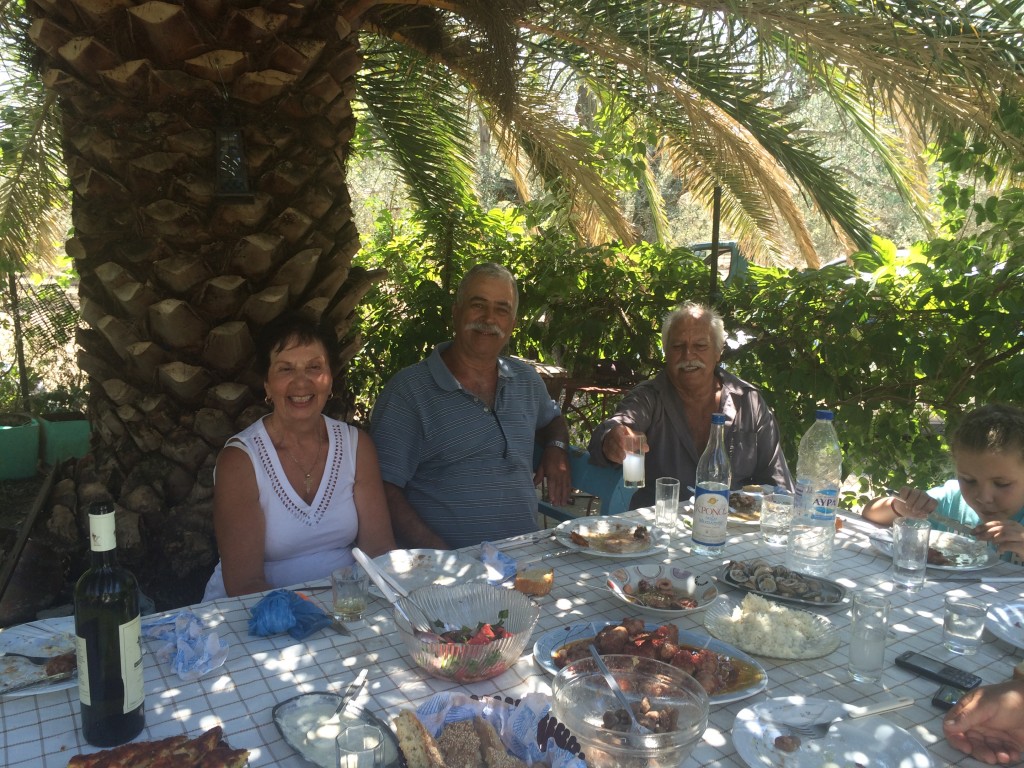 A traditional Greek family lunch under the palm tree, near the Gulf of Kalloni, with friends from Sydney, Australia

Anastasia is an excellent local cook and the lunch started with kedonia (fresh clams from the gulf) which she opened with a small knife and we ate raw with a squeeze of lemon. These were followed by kolios (salt mackerel), a Greek salad and tirikafteri (a spicy cheese dip).
Then arrived a series of hot dishes – octopus in red wine, cuttlefish with black olives, souzoukakia (delicious meatballs made with minced pork, goat and veal meat), and finally a flavoursome rooster dish (petinos kokinistos/alauiaris), served with rice.
The goat meat, pork and rooster were also bred on the farm, as were all the vegetables. The only thing bought was the rice. Even the white wine was home-made by a neighbour. 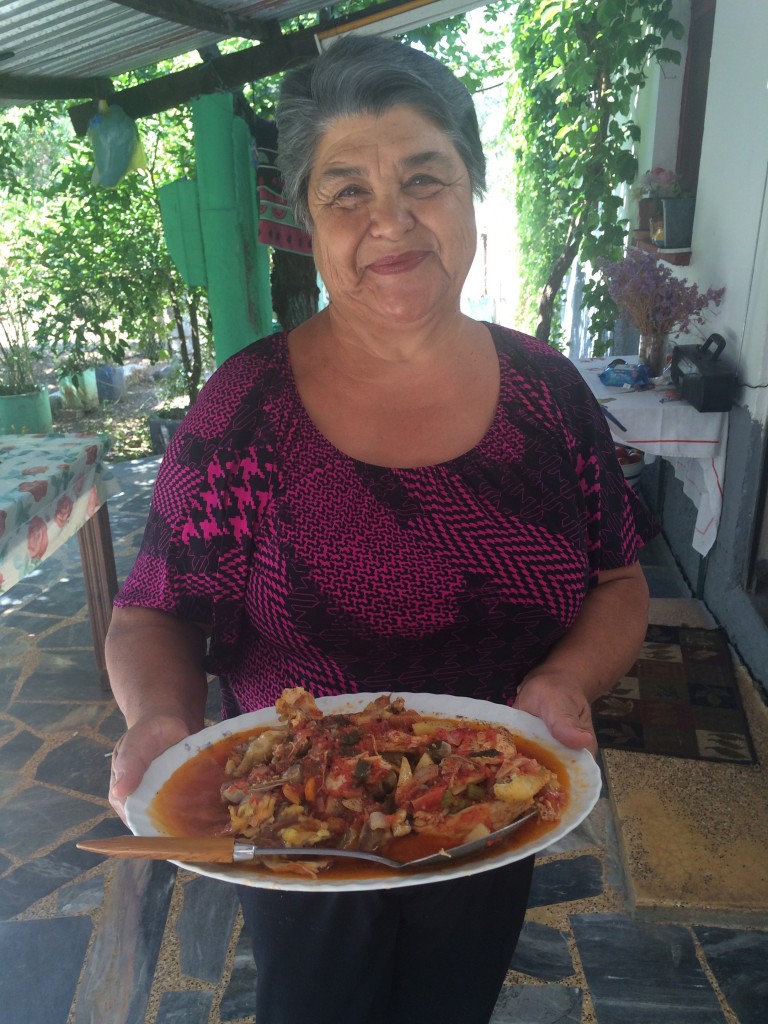 Anastasia with her tasty rooster dish

“The food in Toronto doesn’t taste the same,” Effie told me. “Even the boiled zucchini there doesn’t have the same flavour.  It’s the soil and climate here which makes all the difference.  And of course, my mother’s cooking!”
She also told me that it’s the seaweed in the Gulf of Kolloni that gives the famous sardines pastes of Lesvos their special flavour.
Years ago, the family did well from sales of their olive oil.
“But the price has dropped 35% since Greece joined the E.U. and adopted the Euro,” she said. 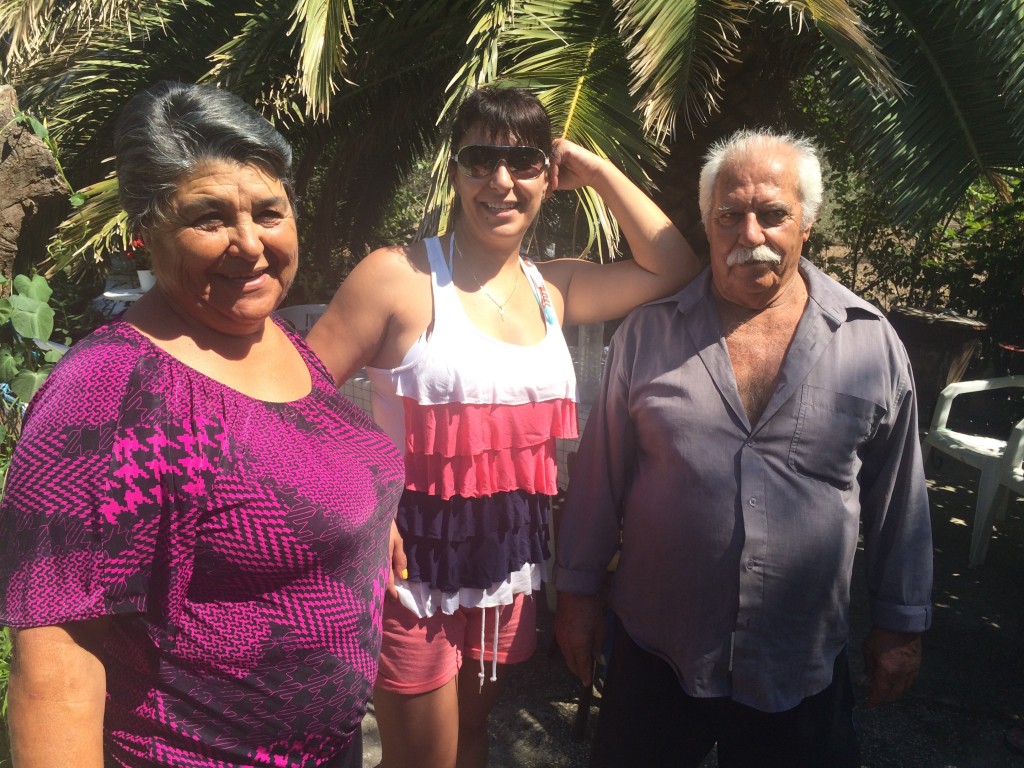 I just hope that Greece can find its way soon out of its current dilemma.
No matter what the Germans or other northern Europeans say, most islander Greeks work very hard to offer hospitality to tourists and to earn a living. I really admire their spirit.

2 Responses to A Walk on the Wild Side in Lesvos