A tiny village in Valencia, Spain, hosts a tomato festival, La Tomatina, each year at the height of summer.  Actually it sounds to me more like a tomato war than a celebration of the most popular fruit vegetable in the world. 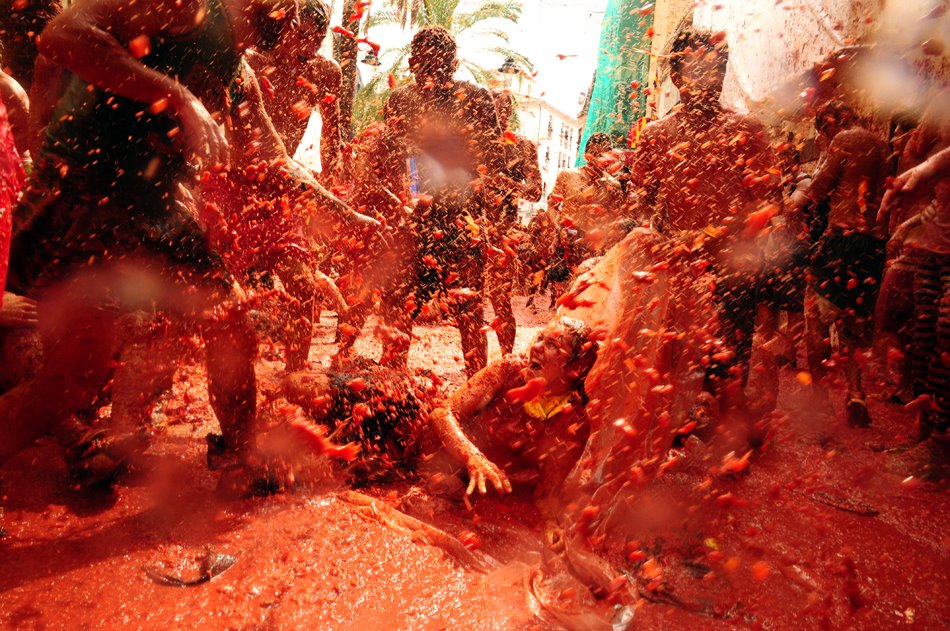 At the festival a few years ago 30,000 people from around the world descended on the small town of Bunol to hurl 100,000 kilograms of squashed ripe tomatoes at each other. One participant sported a large pair of goggles to help deal with all the messy red slush. At first I thought it must be a tradition harking back to the bad old days of the Inquisition but apparently the ‘Tomatina’ is just a fun event where you can throw tomatoes at each other and forget your daily cares.  Local lore suggests the tradition started in the 1940s when residents splattered an old man who was “serenading” the town on a guitar.
Poor old tomatoes! Ever since their discovery in the 16th century by the Spanish in Central America they’ve survived a questionable reputation and been called many  names. 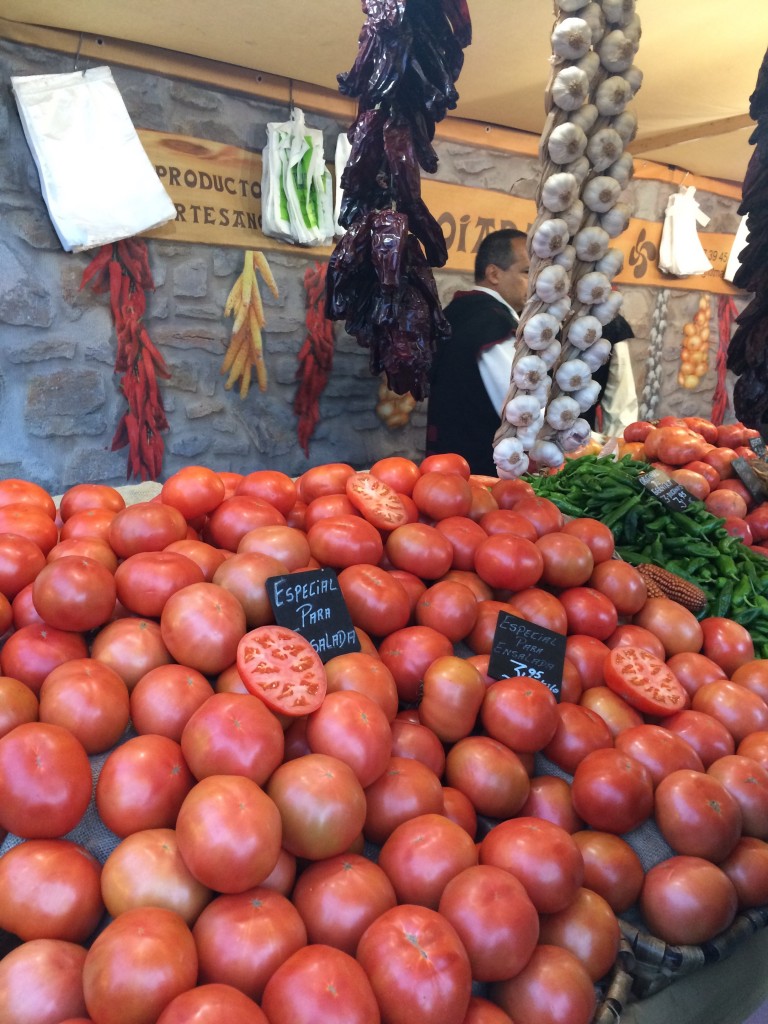 Tomatoes for sale at a market in Vitoria, Basque Country, Spain

When first introduced to Europe from Central America in the sixteenth century, the ‘tomate’ (or ‘tomatl’) was treated with much disdain.
Being a member of the deadly nightshade (‘Solanaceae’) family, early botanists classed it as poisonous. Perhaps someone had eaten the leaves instead of the fruit, which would explain its wicked reputation, for its leaves and stems are toxic.
The Spanish who called it “manzana” or apple, banished it at first to the garden where it was cultivated as an ornament. There, so the story goes, it was discovered by an Italian chef who took it to Florence and flavoured a sauce with it for the Borgia family. The Italians  called it ‘mala aurea’ or ‘poma amoris’ (Latin for golden apple or love apple).   A visiting dignitary from France seems to have misunderstood the name and returned to his native land calling it ‘pomme d’amour’ or apple of love. The confusion is understandable when you know that tomatoes were also thought to be potent aphrodisiacs.
The tomato was such a fabulous discovery.  Where would the modern cook be without it? And can you imagine Mediterranean food without it? 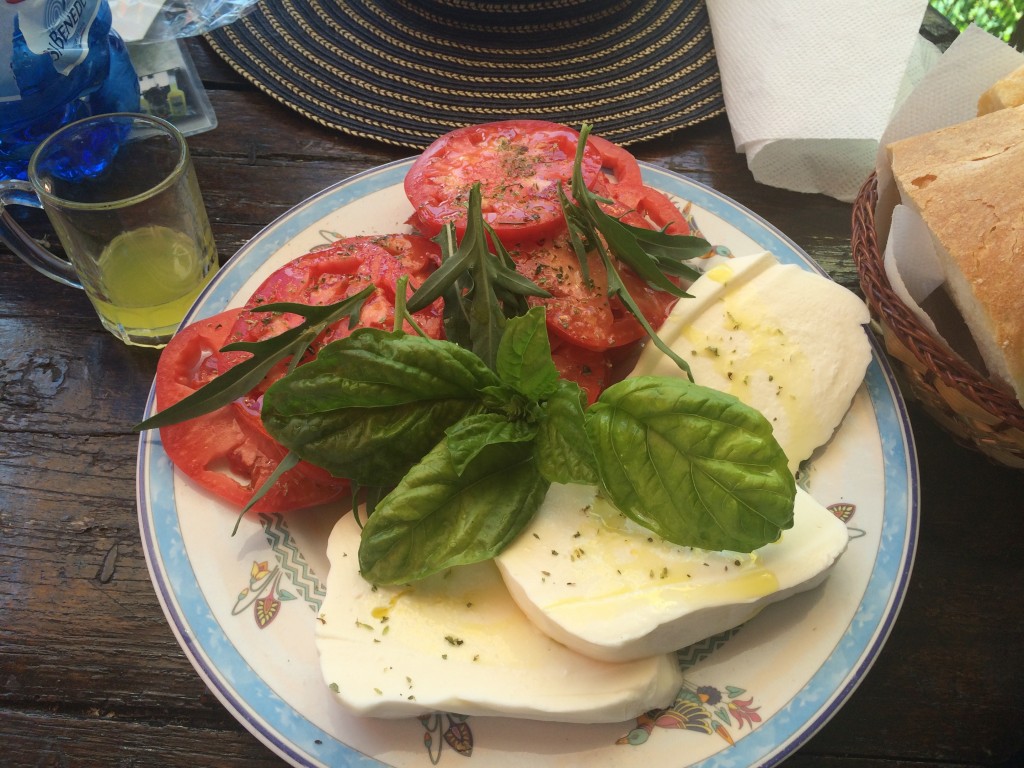 My own love affair with tomatoes began many years ago after I’d grown a juicy bright red crop of cherry tomatoes (back then most shop-bought tomatoes were so hard that you could play cricket with them!).  Picked fresh from the vine, I popped a few of them in my mouth and once the thin skin was pierced, they exploded with the flavour of warm sunshine. I’ve not had as much success with Grosse Lisse or Marmande, the larger home garden varieties, because the bugs always get to them before I do. 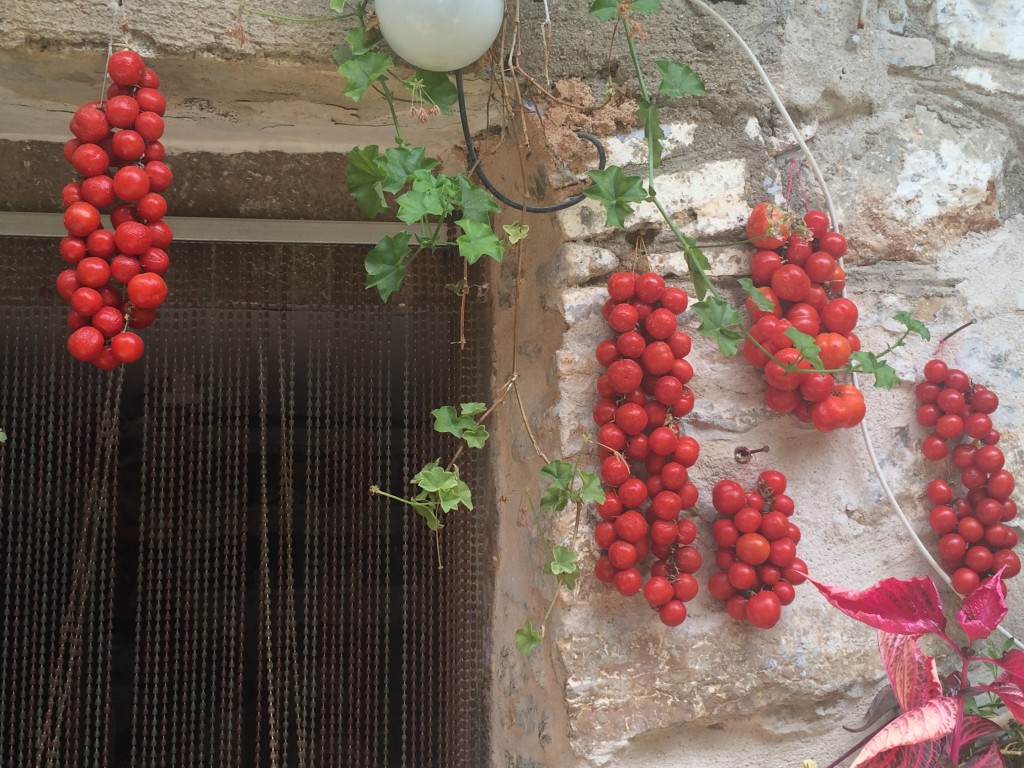 Cherry tomatoes drying in the sun on the island of Chios, Greece

Fortunately for the home cook and restaurant chef, Aussie farmers have really worked at improving the flavour and colour of tomatoes over the past five years so that we can now choose from a variety of tasty bright red trellis tomatoes grown either outdoors or in a glasshouse. Most of these are available with the calyx and part of the vine attached. Vine-ripening as opposed to ethylene gas ripening has hugely improved the flavour as has the use of the ‘Daniella’, an Israeli variety which has been crossed with Dutch and Australian varieties.
What’s more, tomatoes are now available almost year-round – in winter they’re grown in Bowen, Queensland and Carnarvon W.A.  In spring and autumn they come from Bundaberg, Queensland and in summer from Shepparton in Victoria. Of course there are hundreds of varieties of tomatoes to choose from (look out for tiny yellow teardrops, red grape tomatoes, oxhearts and my favourites – the Romas). If you’re wanting to grow your own, Digger’s Seed Club at Dromana in Victoria offer over a hundred heirloom tomatoes: www.diggers.com.au. 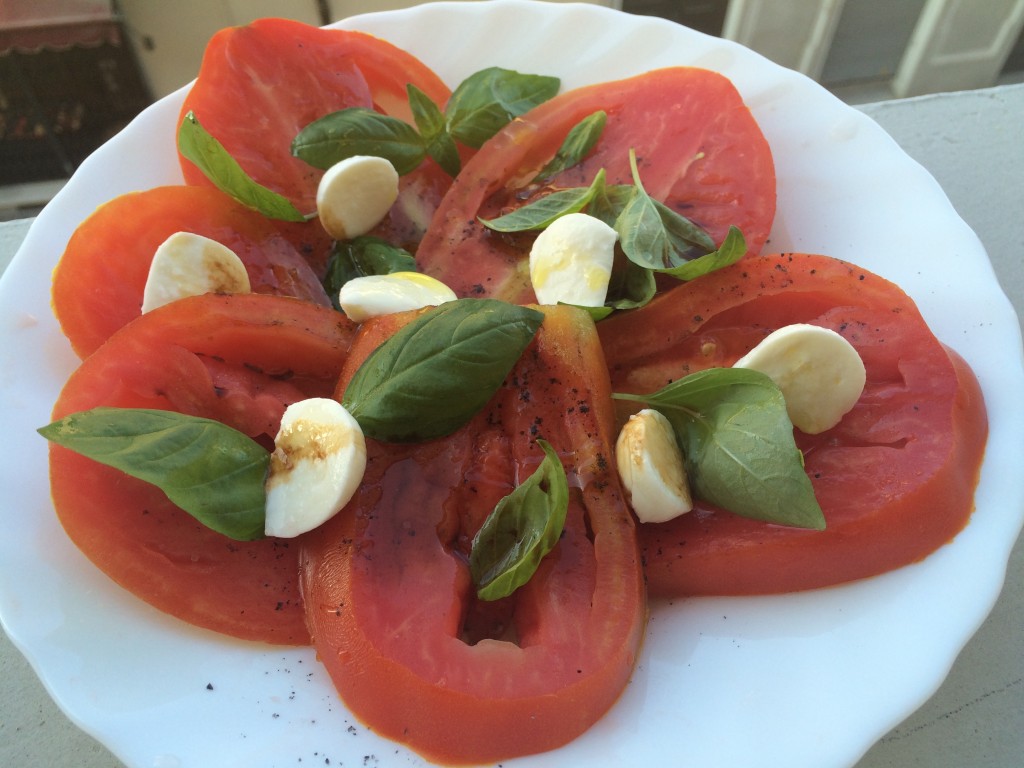 A simple luscious summer salad of tomatoes, bocconcini and basil

Recently I discovered the reason for my love affair with tomatoes. Scientists now believe they have become so popular because they contain glutamic acid, otherwise known as umami, now recognized as a fifth taste (after salty, sweet, bitter and sour). Umami is what gives tomatoes their meaty or savoury taste and is far more prevalent in ripe tomatoes than in pale pink ones.
I can think of nothing more divine than the salad of vine-ripened tomatoes served by Damien Pignolet at Bistro Moncur in Sydney’s eastern suburbs years ago.  Sliced juicy ripe tomatoes are tossed with their soul-mate basil (the leaves are torn, not cut) extra virgin olive oil, aged balsamic, ligurian olives, Maldon salt and freshly ground pepper – so simple yet so perfect. I play around with this endlessly at home, sometimes tossing it together with steaming hot spaghetti for a quick summer meal. At other times, I might add sliced mozzarella or bocconcini or substituting fresh peppery rocket for the basil. I never bother to peel the tomatoes. 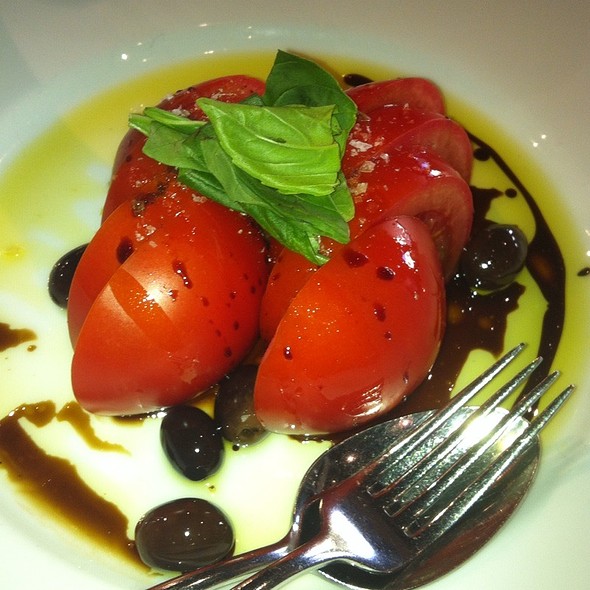 In summer I’ll often make a nicoise salad in which ripe quartered tomatoes are combined with tinned tuna (preserved in oil, not brine), quartered boiled eggs and chats, blanched baby green beans, thinly sliced red onion, curly endive, nicoise olives and anchovies and tossed together with a well made vinaigrette. Another summer favourite is the chilled Spanish soup salad gazpacho, a combination of juicy ripe tomatoes blended with cucumber, green capsicum, green chillies, red onion, breadcrumbs, olive oil, salt and pepper and served with ice cubes.
And I don’t know where I’d be without tomatoes to add juiciness to sandwiches and to add flavour to pizzas and sauces. 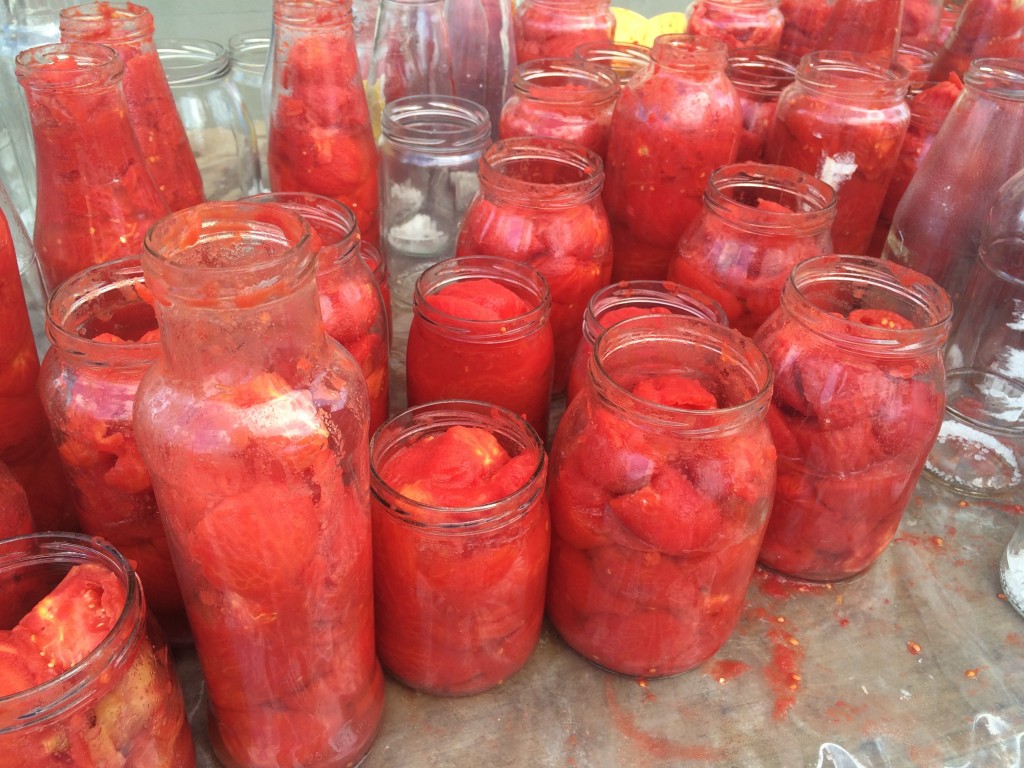 “The tomato focuses and improves recipes that were appealing before the tomato was available but that became extraordinarily attractive after it was added,’ said Raymond Sokolov said in Why We Eat What We Eat. 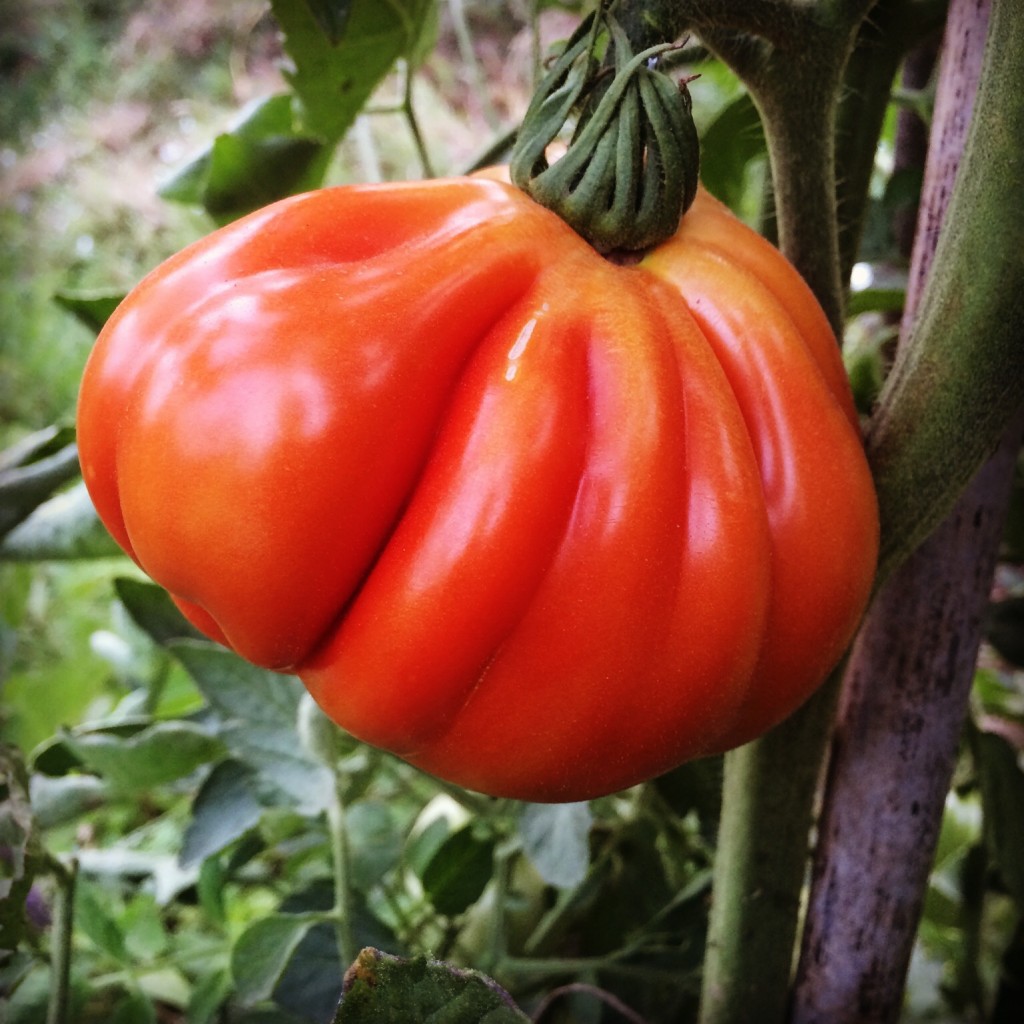 A magnificent ‘ox heart’ or beefsteak tomato on the vine in the vegetable garden of the Gastronomic Society, UNISG, Bra, Piedmont

Tomorrow for brunch, try this remarkable entrée: take some ripe oxheart (or beefsteak) tomatoes, slice them thickly (3cm).  Melt a generous amount of butter in a pan and add a squeeze of garlic. Poach the tomatoes in this mixture (they should barley bubble) until the juices ooze.  Add some freshly snipped French tarragon, sea salt and freshly ground black pepper and serve over toasted brioche. Fit for a king (or queen)!
And if you live in Sydney, don’t miss the Tomato Festival at the Royal Botanic Gardens on February 19th & 20th.