It’s raining mulberries on our dinner table at the Nadir Divan-Beghi Madrasa in Bukhara, an ancient city on the Silk Road in Uzbekistan, Central Asia. 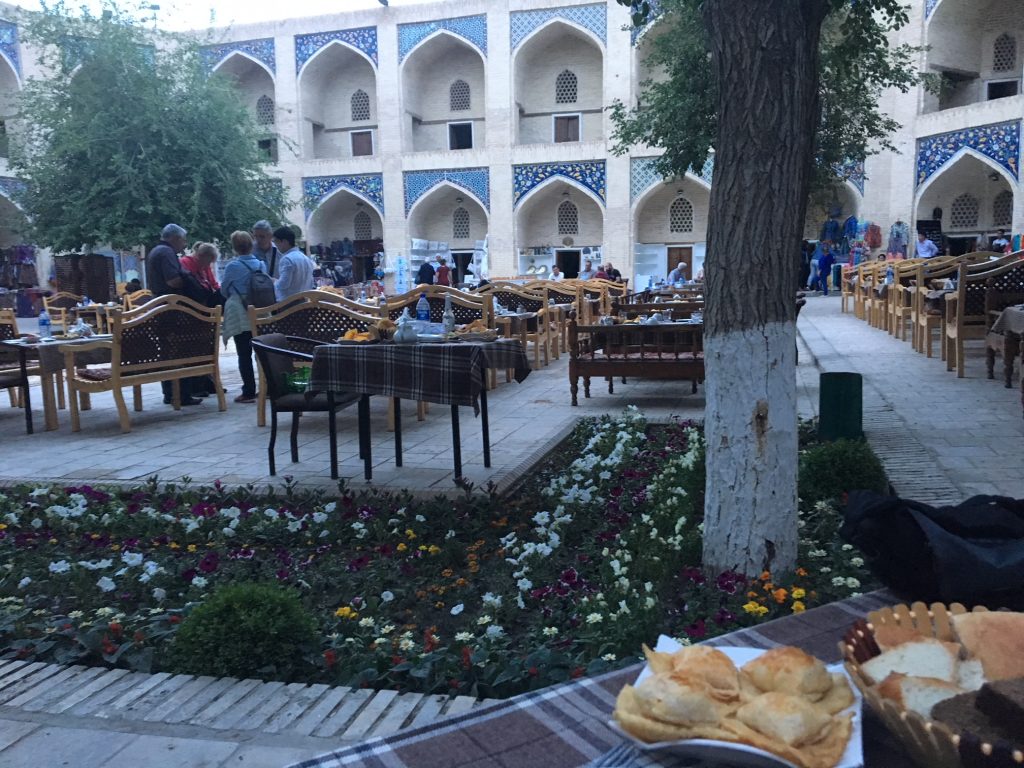 They’re white mulberries, also known as silkworm mulberries (Morus alba), not the black ones which stain your fingers and clothes. Their leaves feed silkworms, those voracious little spinners whose fibres were coveted for thousands of years by Greeks, Romans and Persians.
In his fascinating book, A Carpet Ride to Khiva, Christopher Aslan Alexander says that the secret of silk was discovered accidentally around 4500 years ago by the Yellow Empress of China.
“She was reputedly enjoying a bowl of green tea in her garden when a cocoon plopped into her cup from the overhanging mulberry tree.  She tried to fish it out and it began to unravel – changing the fortune of her empire in the process. Not only did silk provide a warm, comfortable fibre for making into cloth, it also possessed a unique luminescence and lustre that made it the queen of fabrics.” 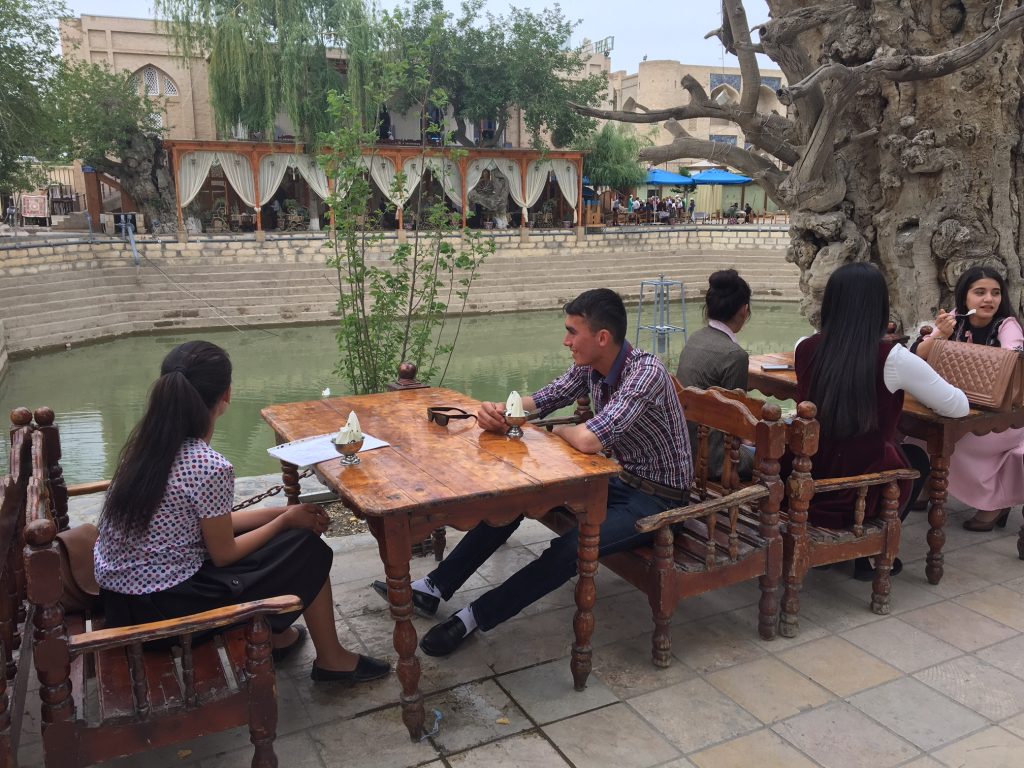 Enjoying ice cream under an ancient mulberry tree alongside the Lyabi-Hauz, or Holy Pool, in the centre of the old city. The Divan Begi Madrasa overlooks the pool

A few fall into the small dishes set out to tempt us before the main meal. They  include tiny cheese pastries, yoghurt, orange & kiwi fruit segments, a beetroot salad and the ubiquitous tomato & cucumber salad.
Alas, no cocoons, though a fashion parade of traditional silk evening gowns, complete with gold embroidery and modelled by stylish young women, is taking place before our eyes in the courtyard.
The haunting sounds of the Ud and ghijjak, an instrument similar to the violin, are playing in the background, accompanied by the tanbur (a long-necked string instrument) rubab (lute-like instrument) and doira (drum).
Our main course arrives in a small hot terracotta pot. There are thickly sliced carrots on top, then a layer of  potatoes followed by a layer of tomatoes and pieces of fatty mutton at the bottom. The meat is chewy and leaves a strong aftertaste of lamb fat. 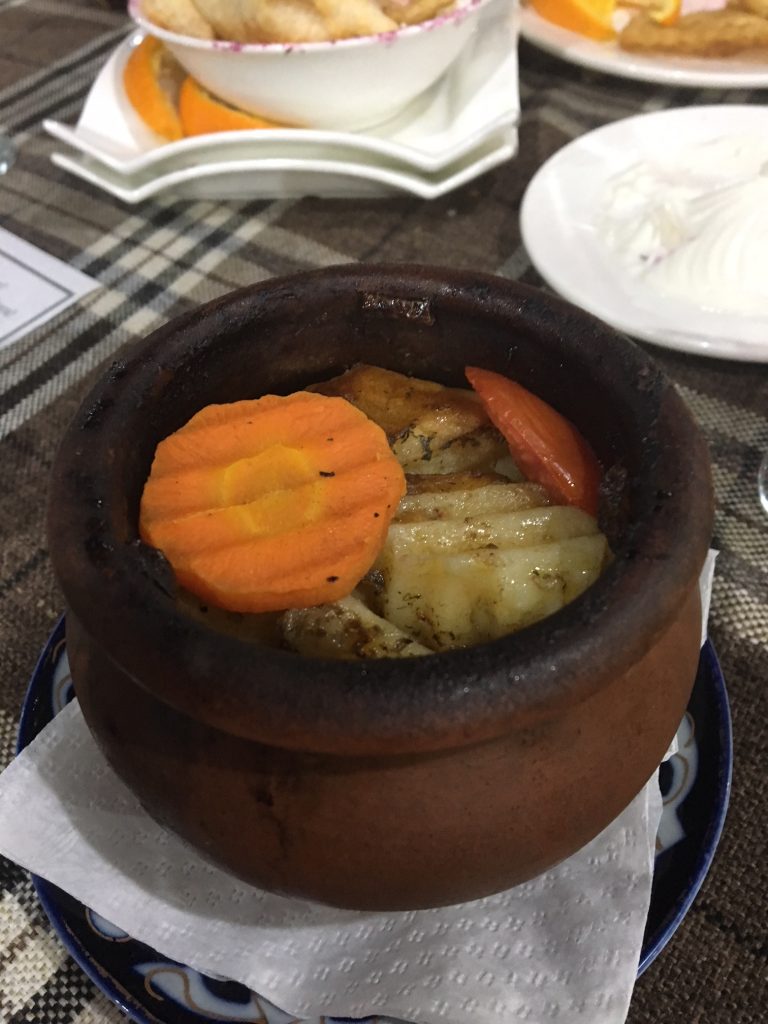 Terracotta pot with layers of carrots, potatoes, tomatoes and fatty mutton, a typical Uzbek dish (as one travel guide puts it, Uzbekistan is the artery-clogged heart of Central Asia)

Admittedly my reasons for visiting this fascinating part of the world weren’t to do with food, though I would have appreciated more meals in the homes of local people to sample true Uzbek cooking, such as the plov made by Rakhmon Toshev one night.
Rather, I was motivated by a tour my mother did in 2006 with the late Dee Court, (stylist Sibella Court is her daughter), who was working at the time with Alumni Travel and whose knowledge of the history, architecture, carpets and textiles of Uzbekistan was outstanding.
I was also keen to set foot in Bukhara and Samarkand, two legendary cities mentioned by Gurdjieff in his book Meetings with Remarkable Men. Gurdjieff was an influential Greek-Armenian spiritual teacher last century who travelled to Central Asia in search of the “truth”. The men – or “seekers of truth” – whom he met on his travels helped him track down ancient spiritual masters and texts from which he went on to develop “The Work”.

Cornice of the stunning gilded ceiling of the Tilla Kari Madrassa, part of the Registan complex in Samarkand – more than 4kg of gold leaf was used to decorate the ceiling

As John Lawton observes in Travel to Landmarks: Samarkand and Bukhara, few landmarks have tantalised the minds of men more than the legendary caravan cities of Central Asia.
“For the lust of knowing what should not be known,” wrote British poet-diplomat James Elroy Flecker,“we make the Golden Journey…to divine Bukhara and happy Samarkand.” 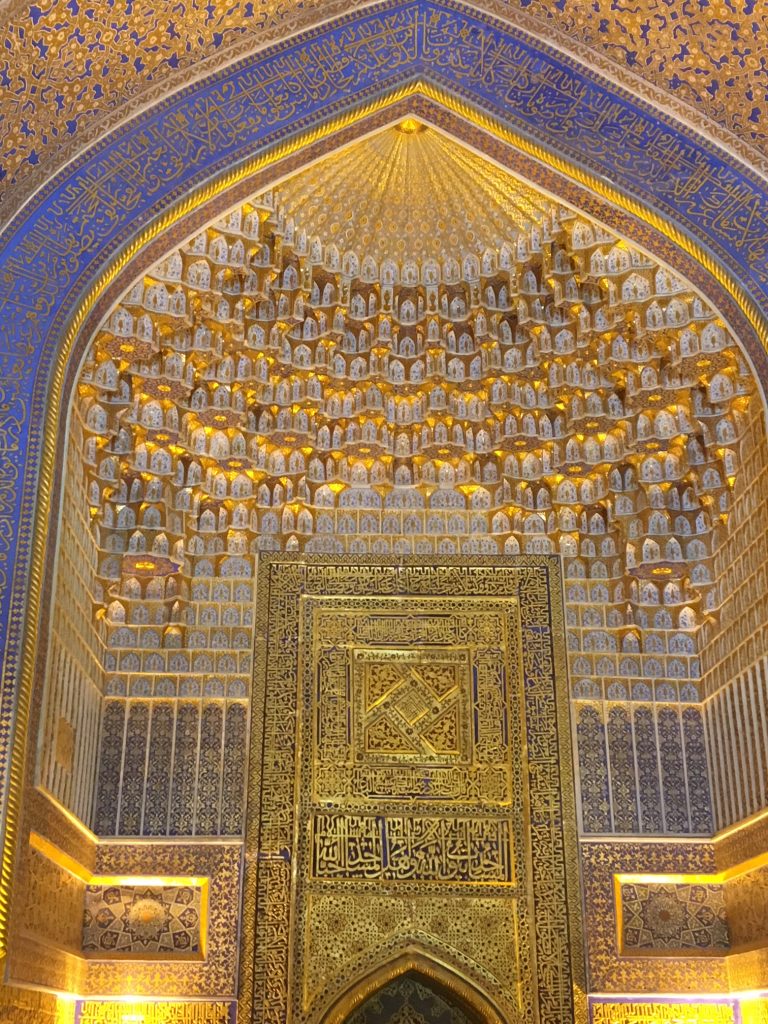 Until recently, few Westerners had visited these remote inaccessible cities hidden behind mountains and deserts, though many (including Keats, Milton, Marlowe, Kipling and Oscar Wilde) had written about them, but not set foot there.
One Westerner who reached Bukhara in the 13th century was Marco Polo who described it as a “city most noble and grand.” Another was Lord Curzon in the 19th century who found it in decline but still “the most interesting city in the world.”
Once the holiest city in Central Asia, it was said that the light in Bukhara shone up to heaven, not down, and still today – despite decimation by Genghis Khan in 1220 and the Soviets  in the 1920s – it remains one of the most esteemed cities in Islamic civilization. The name Bukhara is related to the Sanskrit vihara (shrine or monastery) while the Zoroastrian Magi translated Bukhara as temple.
Mind you, my initial impression of Bukhara was somewhat disappointing and almost quenched my lust. We’d taken the Afrosiyob fast train from Samarkand which sped us across a dry sandy plain to Bukhara’s modern railway station, situated 12km from the old city. 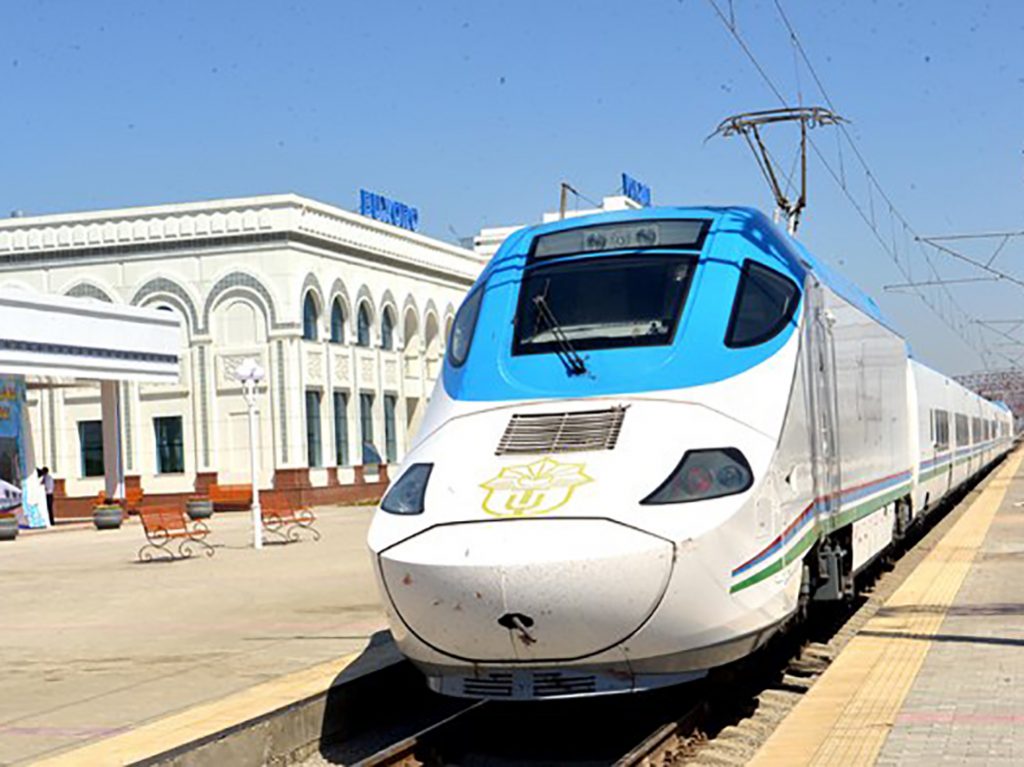 I was astonished by the amount of traffic on the road leading to the old city and by the vast number of sandy-coloured apartments being built on each side. We passed a big soccer stadium and a large Bella Italia restaurant before being told the road was blocked and we’d have to walk in to the old city where we encountered more building work taking place in the old alleyways. 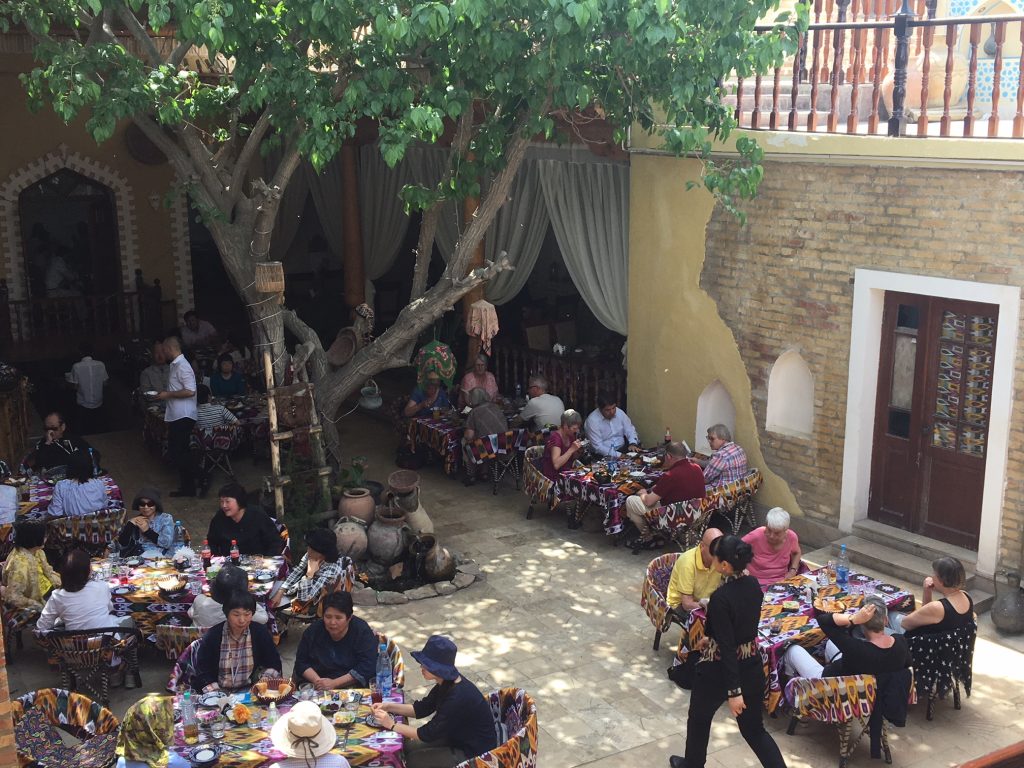 It was a hot windy day and I was delighted to stumble across the Restaurant Old Bukhara restaurant, situated in a cool shady courtyard not far from the Lyabi-Hauz plaza in the centre of the old city.
Their mastava, a traditional Uzbek soup made with meat, rice and vegetables and served with sour cream was flavoursome, but I really enjoyed their beef kebabs (or shashlyk), fresh from the charcoal brazier and served with thinly sliced onion rings. 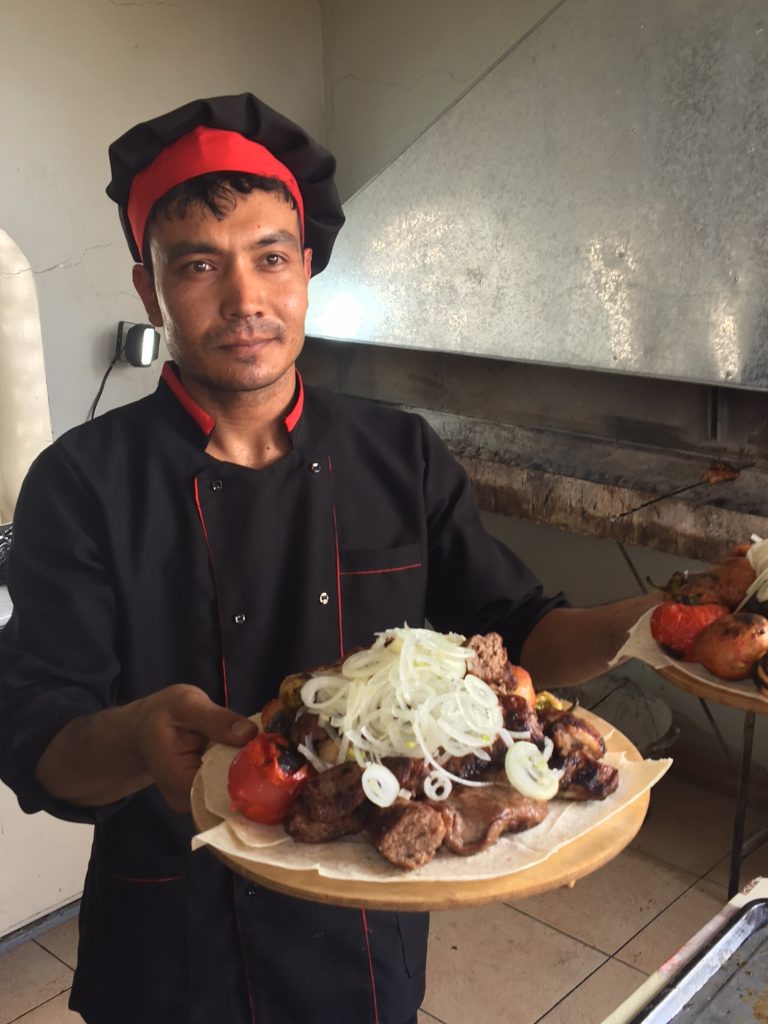 Meat kebabs are popular throughout Central Asia, be they beef, marinated mutton, chicken, minced meat or vegetables and vary in quality – minced meat kebabs can be rather fatty while mutton kebabs are often chewy. 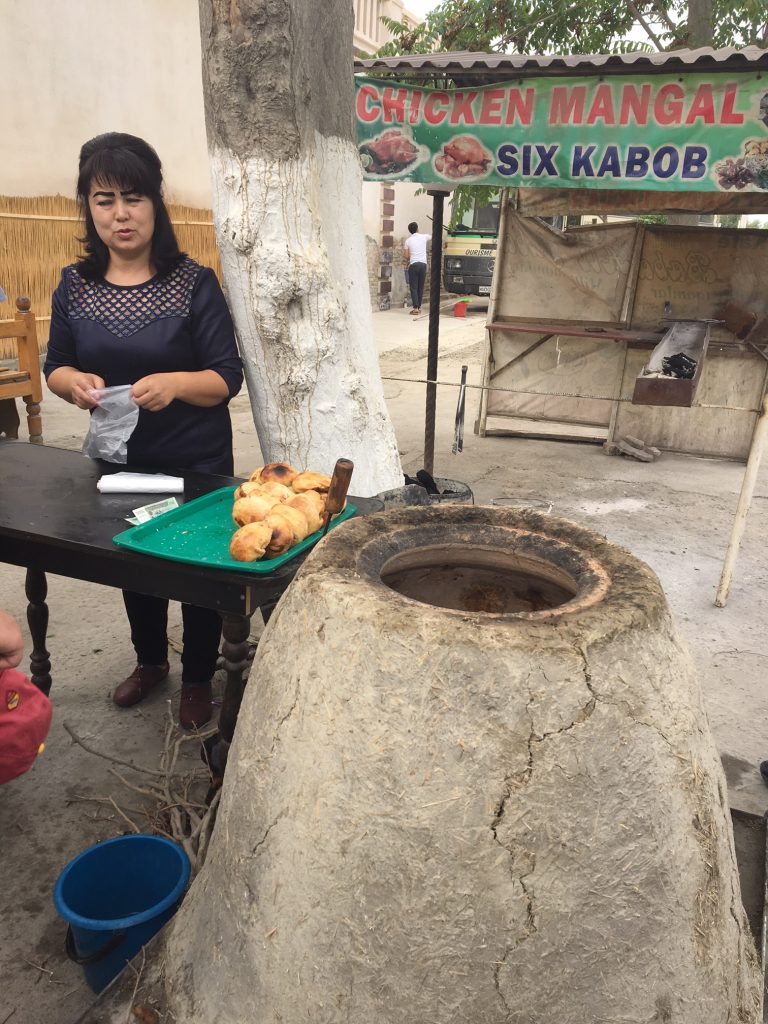 One of the other welcome surprises in Bokhara were the freshly cooked meat samosas (samsas) which we stumbled across at a roadside tandoor on our way to the Bolo Hauz mosque. 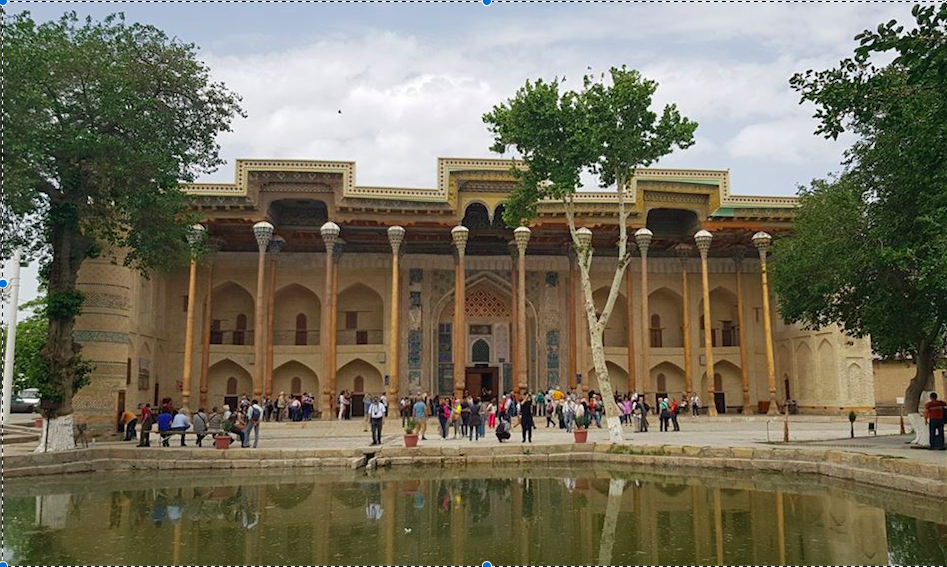 The following day I came across a local woman in the old city selling piping hot vegetable samosas from a  tray. 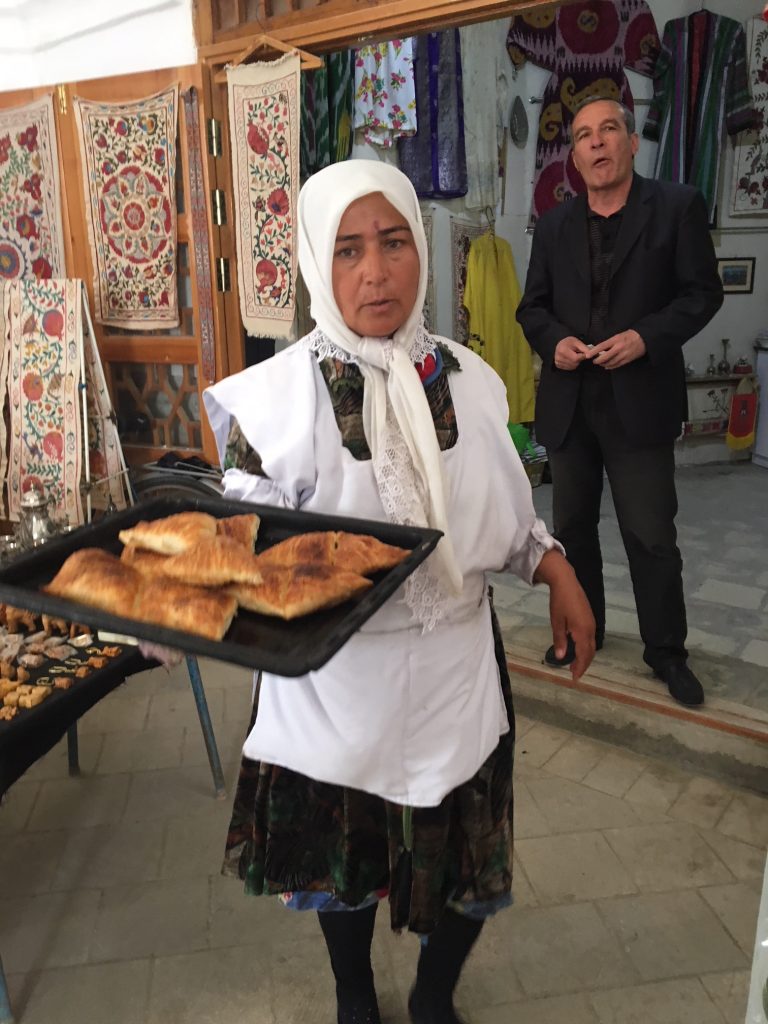 But the most impressive meal I had was the one at the Rakhmon’s home restaurant, tucked away in an alley not from Sasha & Sons B&B, where the family has a magnificent suzani (silk embroidery) workshop. Here we were introduced to the delightful Nasiba whose father Rakhmon Toshev is a suzani and plov master.
While Nasiba explained how the suzanis are made (the fabrics, threads, patterns and dyes used), her father busied himself outside over an enormous cast iron pot making a large quantity of plov Emir. 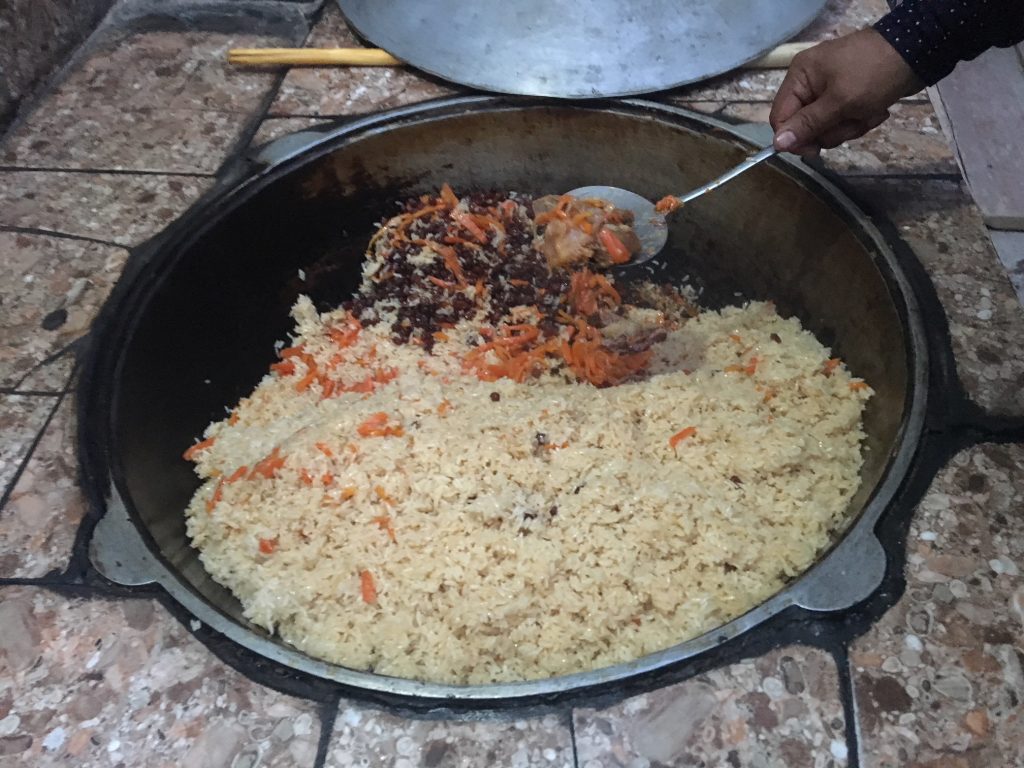 Starting with the large pieces of meat (beef or lamb, chicken is rarely used in Bukhara) which are browned in cottonseed oil, he added a layer of onion, then carrot, raisins, whole garlic bulbs and spices which included black and white cumin seeds, coriander seeds, smashed cardamom, cloves, barberry, saffron, dill seed, muscat, black pepper and sweet paprika, and then long grain rice (250ml-500ml oil:1Kg rice!). Holes were made in the top of the rice to add boiling water, a lid was set on top and then water thrown over the wood fire to lower the temperature and infuse the plov with wood smoke. 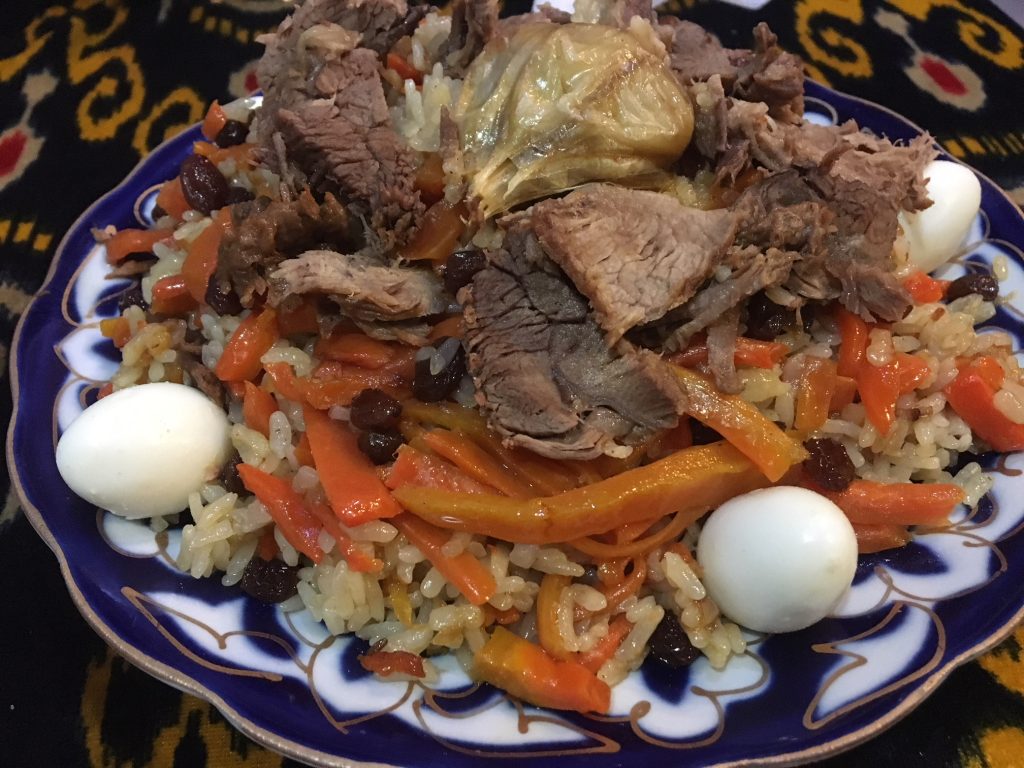 It was a busy night with many guests and I really enjoyed the warm family atmosphere. His dedication to making this colourful festive dish parallels his dedication to embroidering suzani which Nasiba told me he does in winter.
“He prefers to work in silence when there’s no-one around and will often sit for 12 hours so that he can put his heart into it. My mother sits alongside him.”
My favourite suzani was the silk one of the three phoenix embroidered by him and with a sale price of $10,500, sadly well beyond my budget. 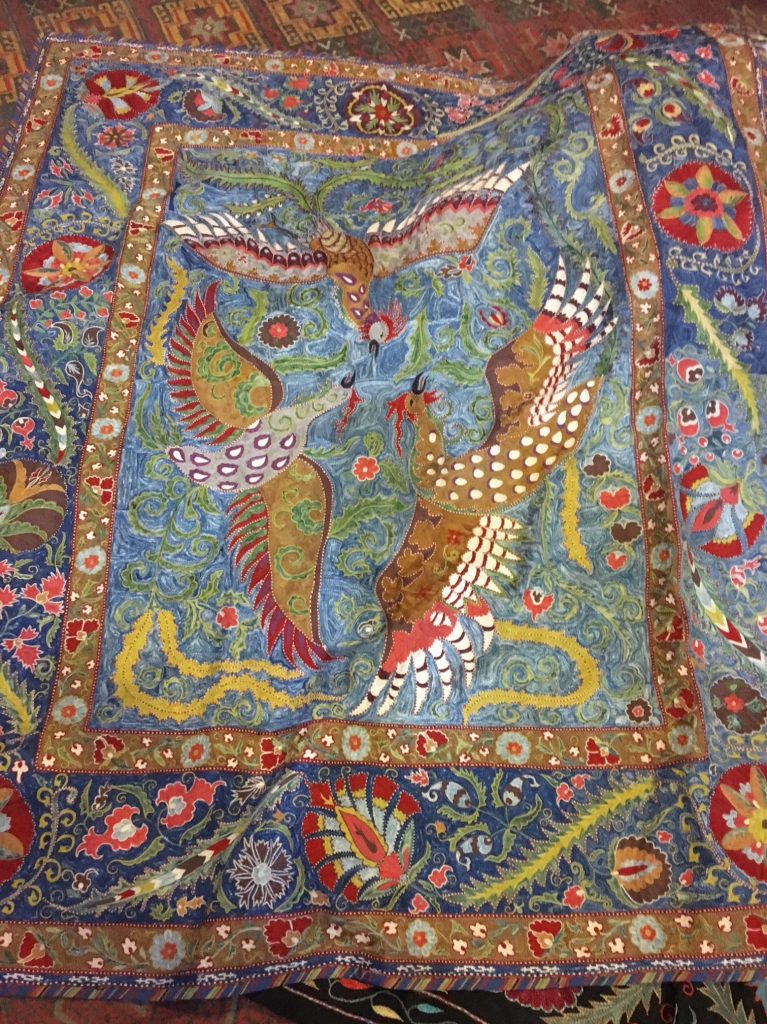 It reminded me of the stunning pair of phoenix facing each other on the facade of the Divan Begi Madrasa where we’d dined the night before – mythic birds which symbolise the rise and fall of this holy city over the millennia. 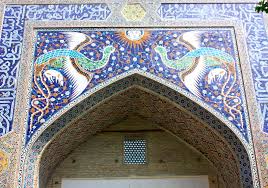 The facade of the Divan Begi Madrasa: one of the finest examples of figurative tilework in Uzbekistan – a pair of phoenix facing each other on either side of a sun with a human face (which directly contravenes the Islamic prohibition on figurative art).

8 Responses to On the Silk Road: Divine Bukhara