Dark Mofo, a festival which celebrates the winter solstice in Australia’s most southern capital Hobart, wouldn’t be Dark Mofo without some controversy.
Yesterday’s “bloody sacrificial ritual” by avant-garde Austrian artist Hermann Nitsch which involved a dead bull, its blood and 500 litres of blood was no exception.
From the moment it was announced earlier in the year, Nitsch’s performance met with  opposition, including an online petition from Animal Liberation Tasmania with over 20,000 signatures. 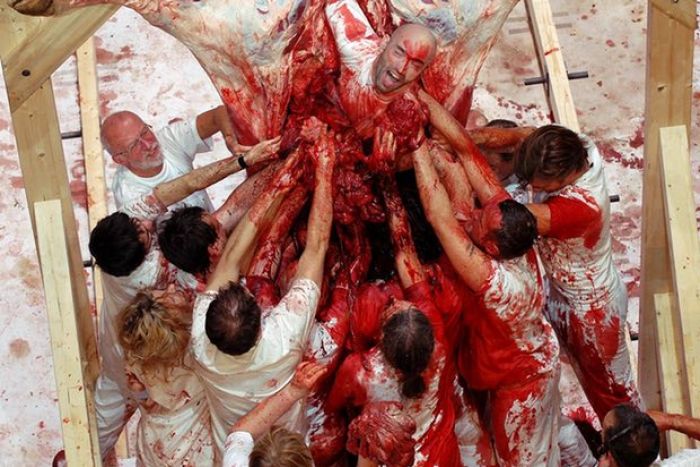 Leigh Carmichael, Dark Mofo’s creative director, pointed out that since its inception in 2013, Dark Mofo had been “exploring ancient ritual and ceremony”,
“Some artists use paint, he (Nitsch) uses blood and meat. It is pretty powerful stuff, it is confronting, and it certainly makes me question my own ethical take on the work,”  Carmichael told ABC Radio Hobart.
“We do deal with strong themes and tough issues and controversial issues from time to time and I guess this is one of those and I am not entirely surprised by the reaction.”
According to Nitsch, the role of the artist is to educate people, to intensify and to find a form, to use and protect all our senses. 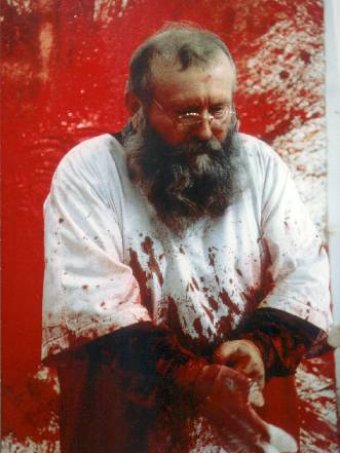 “These fools complaining about animals being killed in my play have no comprehension of the Dionysian nature of existence, “ he tweeted a few years ago.
“I affirm the absolute exaltation of existence, whose prior requirement is the experience of the Cross.”
I’d tried to get tickets a few days before the event, but had left it too late. In retrospect I don’t think it was something I needed to see.  I doubt I would have found it a cathartic, let alone uplifting, experience.
Due to the high degree of opposition, the staging of the event turned out to be highly secretive. Those who’d booked tickets were sent text messages about an hour beforehand with details of where to go. At The Mercury, Hobart’s daily newspaper, only the editor and reporter knew where it was being held – and the photographer was informed at the last minute.
One observer told ABC Hobart News: “It was emotional and intense. The significance of ripping apart a bull was heartbreaking and amazing and in the end, I felt relieved,” she said.
Not for the first time, I wondered, “Yes, but where is the art?” 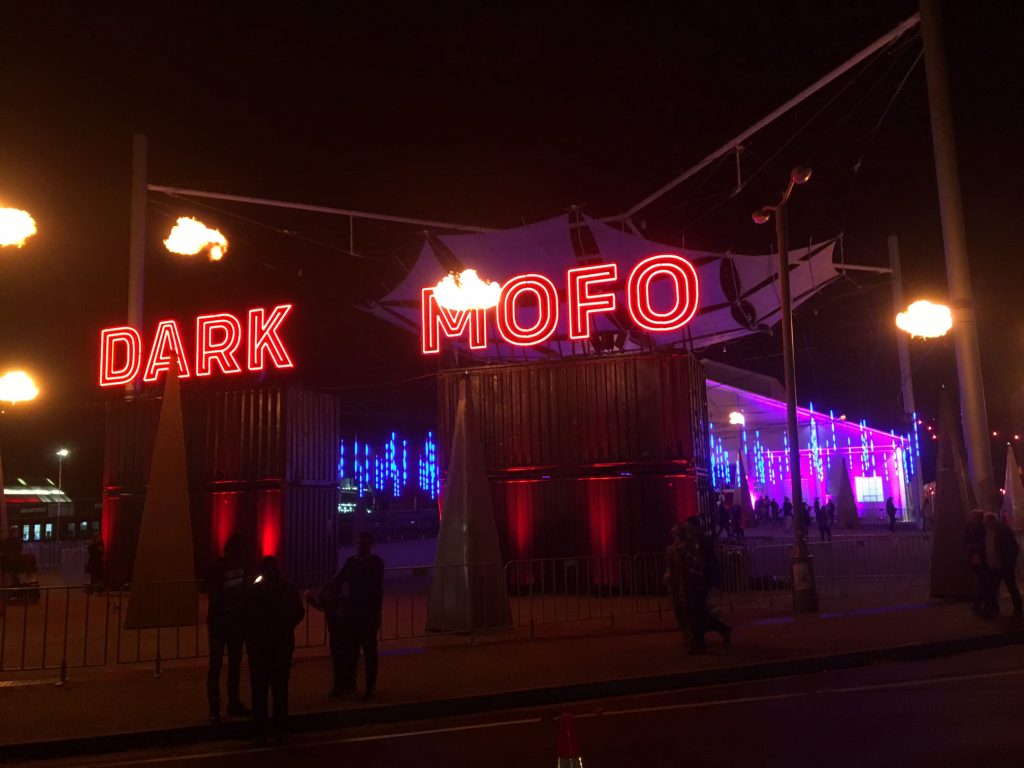 My real interest was the Winter Feast, the culinary centrepiece of Dark Mofo and a fabulous showcase for Tasmanian food, wines, spirits and chefs.
Since its inception four years ago, the Feast has become something of a national pilgrimage for food lovers, attracting up to 10,000 people each night.
This was my first visit and I was really impressed by the variety, deliciousness and affordability of dishes on offer, including many for vegans and vegetarians. 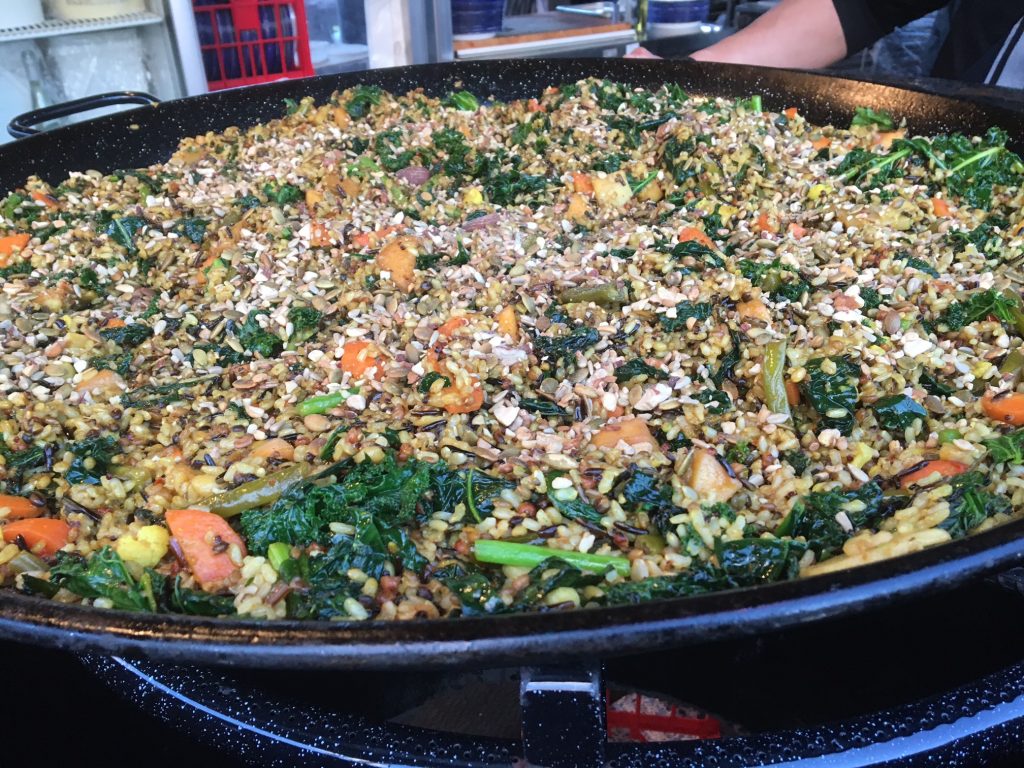 Held in and around Princes Wharf, it’s a superbly organised event and one of the best I’ve been to. I appreciated the cohesiveness of the event due to its location in one place around the city’s waterfront, and also the goodwill and friendliness of all involved.
At the Heavy Metal Kitchen Mona executive chef Vince Trim and Danielle Alvarez from Fred’s restaurant in Sydney had the fires burning early in the day. Their  slow-cooked hogget with wood-grilled potatoes ($20) and smoked beef brisket with baked sweet potato were sensational. I also really enjoyed their Graffiti Rings, a stir-fry of wild rice and ancient grains with winter greens, fermented veg and chilli sambal ($18). 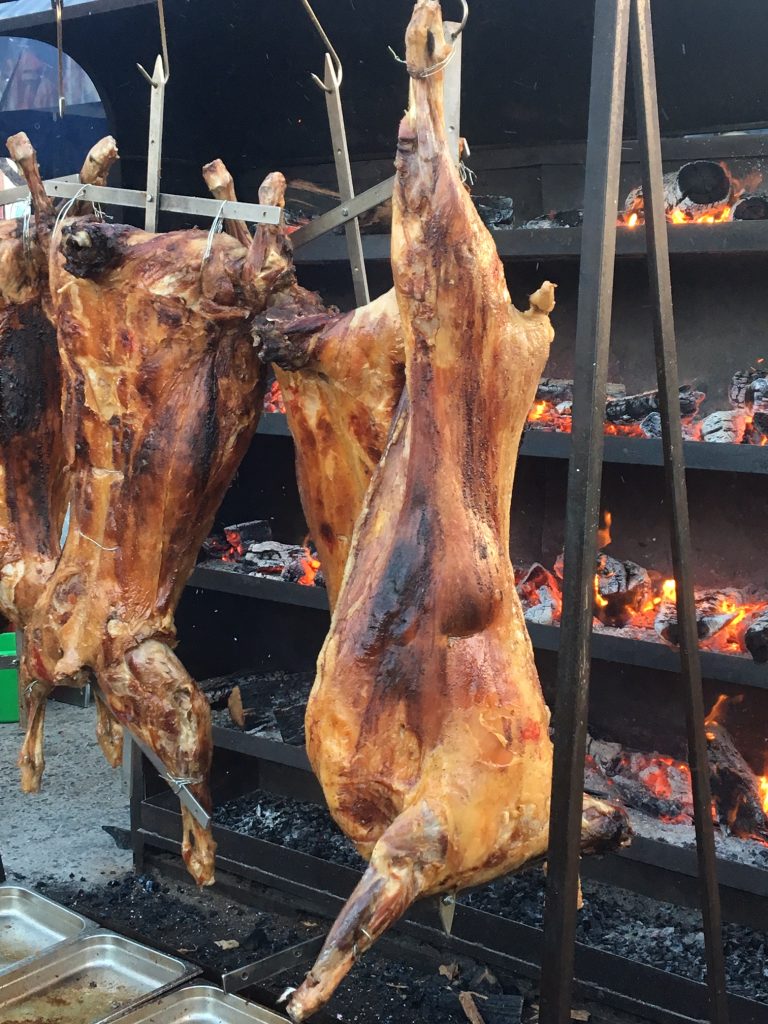 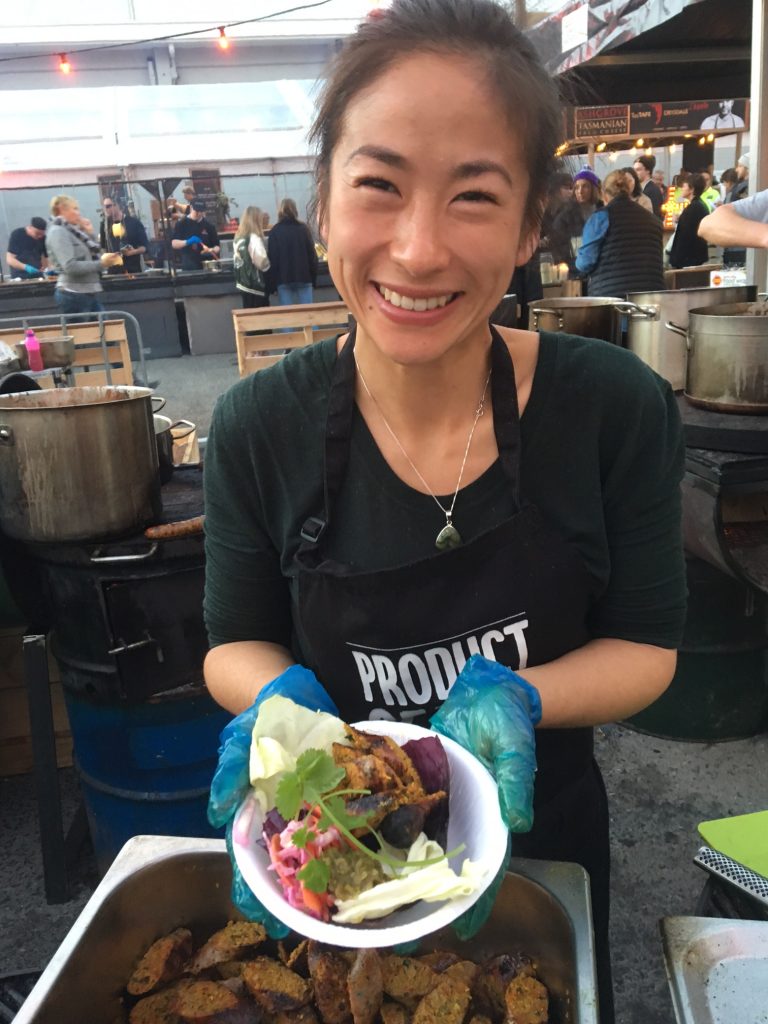 I  loved the fact that I could stroll outside, warm myself by a log fire and listen to music under the trees while sampling different dishes.
Vineyard Seafood’s grilled scallops with hazelnut and coriander butter ($4 each; $20 for 6) were another highlight 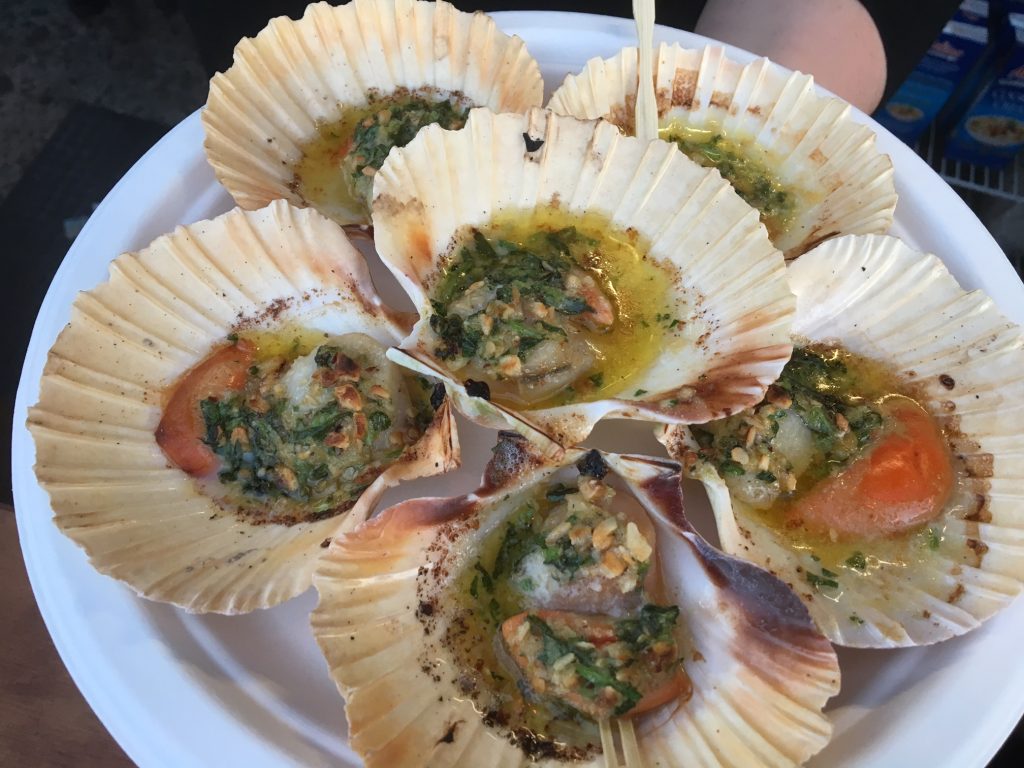 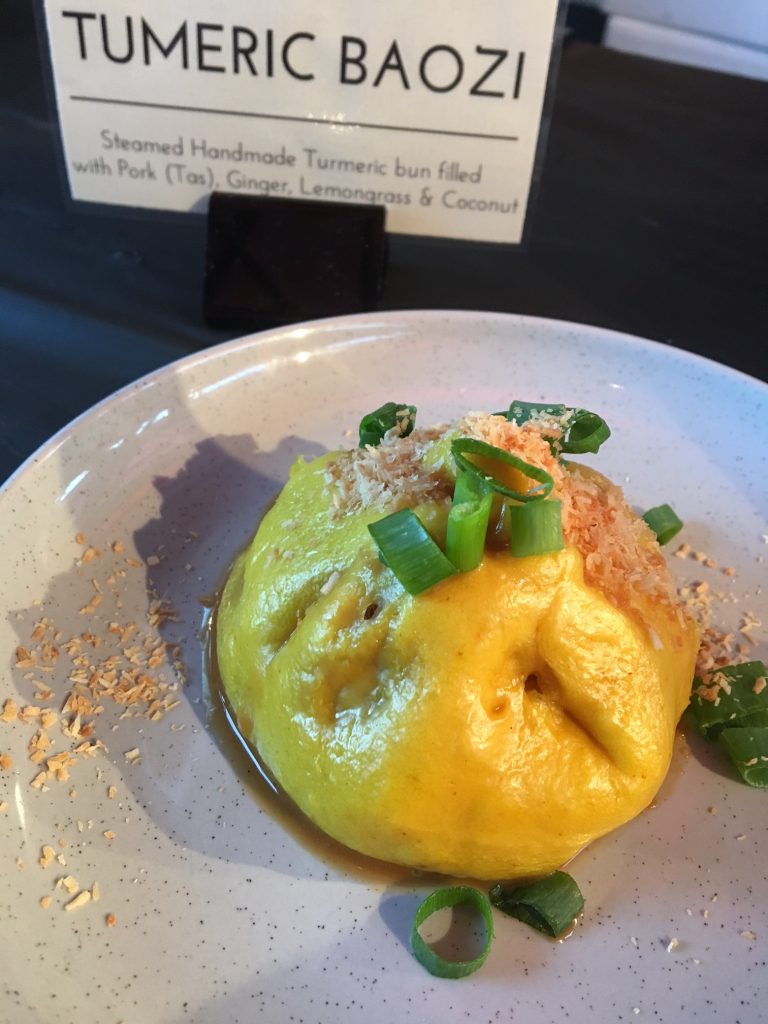 Some of the most unusual combinations at this year’s Winter Feast took place at the Tea Bar with mixtures of tea and gin.  As Elaine Reeves pointed out in her Taste column in The Mercury, chai from Larsen & Thomspon in Melbourne was served in traditional Indian clay cups and matched with Overeem Single Malt and Port Cask Matured whisky; and Forty Spotted Gin was matched with sencha tea in a hot toddy with chai, apple, lime and pepper berry in a rose gin iced tea. 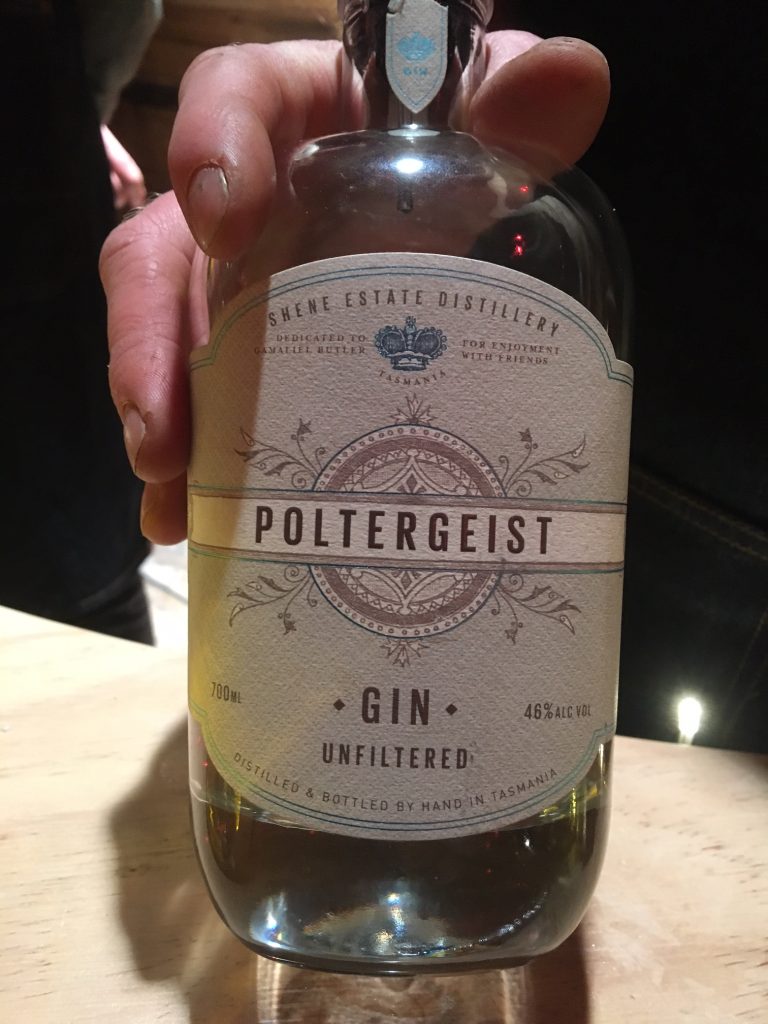 “Multi-award winning unfiltered Poltergeist gin, combined with pu-erh tea, rosehip tincture, dried apple and star anise was served as a hot punch while the same gin, but filtered over activated coconut carbon was served simply as a G&T Tea with slightly sweetened Australian sencha tea and lemon over ice,” said Reeves.
Poltergeist hails from a distillery at the 197-year-old Shene Estate.  According to Myfanwy Kernke, daughter of the owners, the name  was chosen because a poltergeist “is the only ghost who has spirit and can do something with it.” 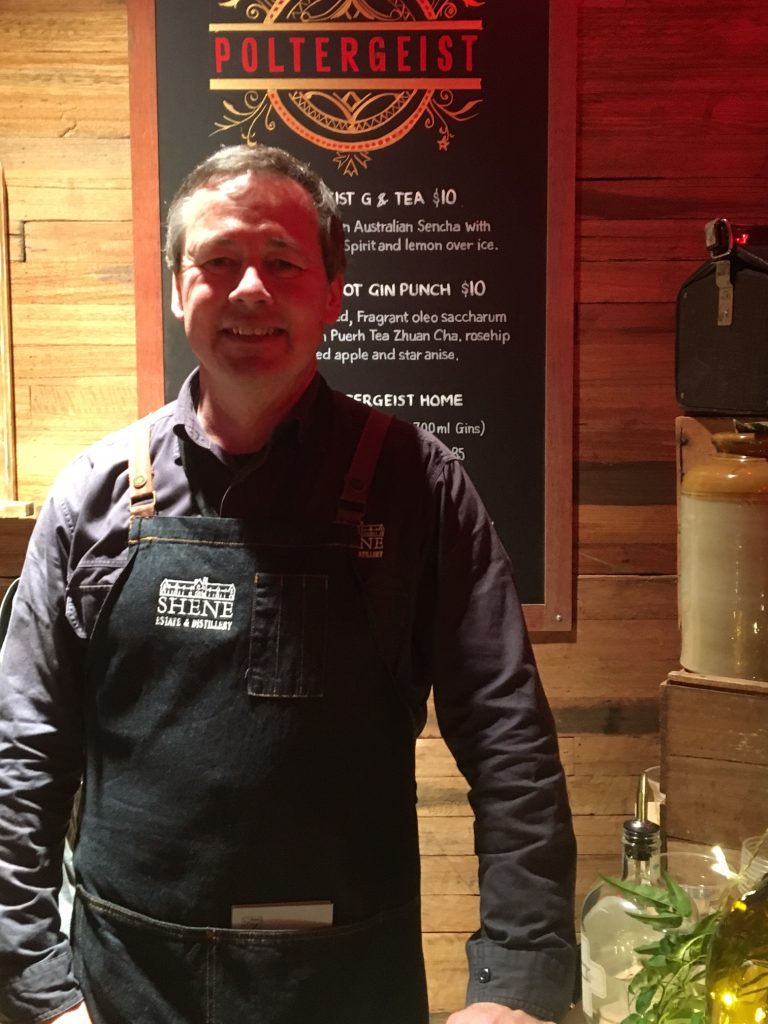 While Dark Mofo with its dark overtones might be ghostly for some, the Winter Feast has well and truly proven it has plenty of spirit.
I’m already looking forward to hearing what’s on the menu for next year. 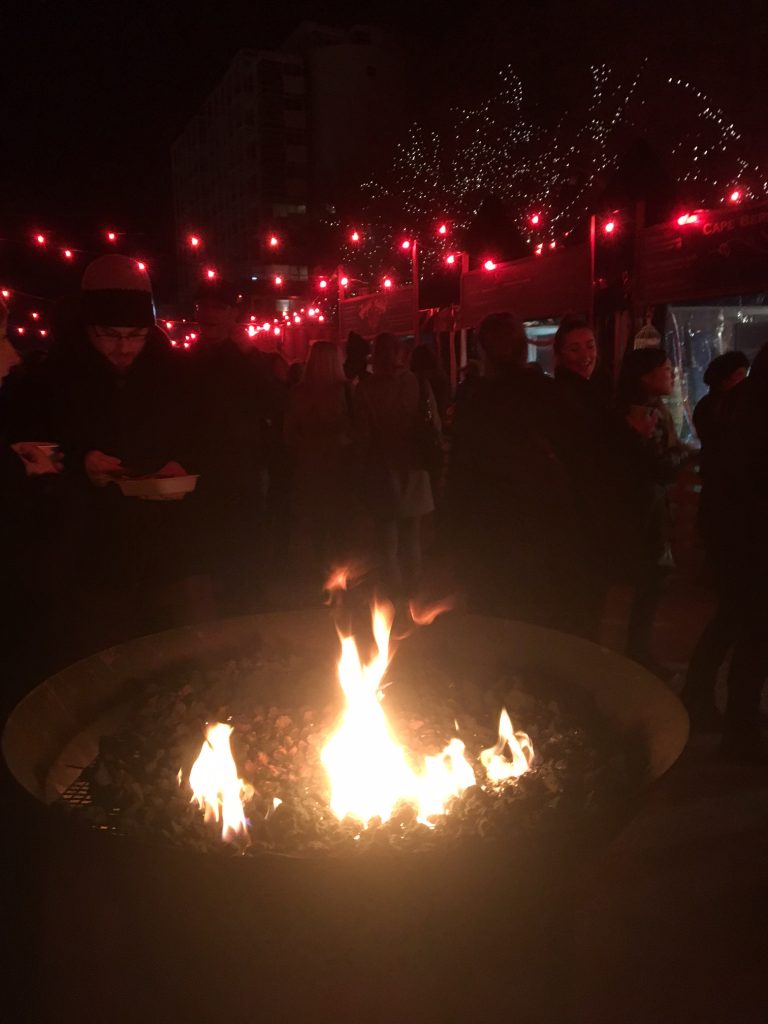