used to be plump and glossy
but his mackintosh has shrunk
as he sucks in his cheeks
while somewhere inside the room
he is giving you the pip
with a wonderfully sour sweetness
like last year caught in a daydream,
the tang of paradise.

Walking along the sand past The Boathouse at Balmoral one morning, I came to a sudden halt.
There, in a purple bowl on top of a lobster pot, sat a mound of wrinkled brown passionfruit.

Passionfruit display at The Boathouse, Balmoral

“Take one,” said the friendly barista as I stood there, fumbling with my phone, trying to take a photo. “Oh, thanks, are you sure?” I said, noticing the flirtatious sparkle in his eye.
I picked one up,  smiled at him, and continued on my way.
Such an evocative name, isn’t it?   Yet the humble purplish-brown fruit hardly lives up to its description.
It’s only once you split it open and breathe in the heavenly tropical fragrance that you understand how it might have inspired passion. For once you’ve tasted the pulp, there’s no way back, no forgetting the sweet-sour flavour and aroma of this sublime fruit.
Its name is more understandable when you know that it doesn’t refer to the fruit, but to the Passiflora or Passion flower, the beauty of which caught the eye of the first Spanish Jesuit missionaries in South America.
Through its shape they managed to explain the story of the Passion or Crucifixion to the natives they intended to convert – the three styles representing the nails, the ovary the sponge soaked in vinegar, the stamens Christ’s wounds, the filaments the crown and the petals and stamens the apostles – which says something about the power of human imagination. Apparently the missionaries believed they’d been planted in the New World to help in the conversion of the Indians. 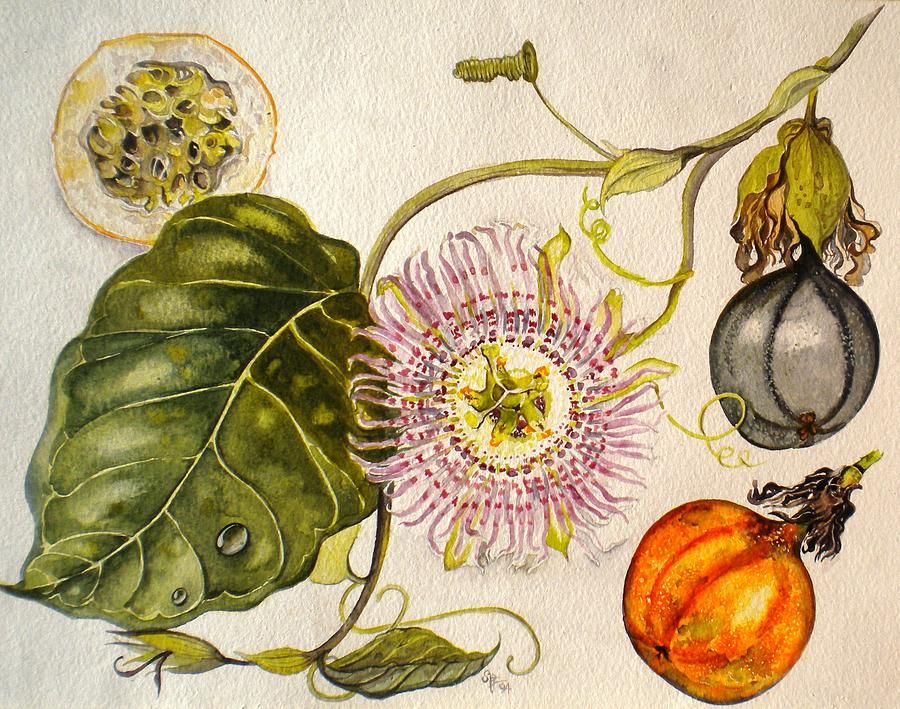 Of the 350 species of ‘Passiflora’, the most important for eating purposes is ‘P.edulis’, a native of Brazil. Its skin is purplish brown which wrinkles as the fruit ripens and is usually round or egg-shaped. Then there’s the Golden or Hawaiian passionfruit (‘P.e. flavicarpa’), known as lilikoi, which is large and smooth with a gold skin and very sweet juicy flesh (though not as perfumed as the more common variety) and the banana passionfruit (‘passiflora mollissima’) originally from tropical South America which resembles a fat yellow banana.
We Aussies tend to take passionfruit for granted because the vine grows so easily over back fences all over the country. Over the years, a number of hybrid varieties with greater depth of flavour have been developed in Australia. These include the purple-skinned Misty Gem and Sweetheart and two red-skinned panama varieties: Pandora and McGuffie’s Red. 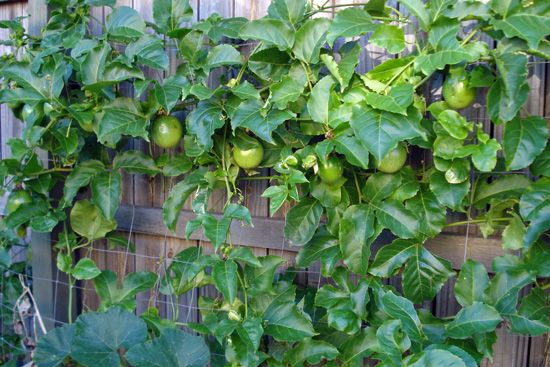 Many of us think passionfruit is native to Australia because it’s absolutely essential to the pav,  the luscious national dessert we lay claim to (but which really belongs to the Kiwis).  Even the well-known comedian and satirist, Barry Humphries, has published a recipe for Passionfruit Pav, the last instruction of which is to “garnish with passionfruit and pronounce incorrectly with emphasis on the last syllable”.
You can also use it as an easy and delicious topping for ice cream or fruit salad, where it acts as a sort of tropical lemon to bring out the flavour of the other fruits, and I’ve known some people to make a cold soup with passionfruit, melon and sugar syrup, adding lemon juice and white wine to bring out the flavour.
It can be quite sexy too, especially when folded through whipped cream and used to sandwich together sponge cakes, meringue kisses and melting moments, or used to fill pavlova roll. For this you’ll need two passionfruit. Scoop out the pulp and stir briskly to loosen the seeds. In a mixmaster, whisk together ¾ cup thickened cream with 2 teaspoons icing sugar to soft peaks, then fold through the passionfruit pulp. Chefs like to sieve the pulp and you can do this if you prefer, but I like the look of the seeds through the cream.
For a summery cake at any time of the year, make a standard butter pound cake or Madeira cake and add the pulp of about four passionfruit to replace the liquid.   For the icing, just mix icing sugar and passionfruit pulp to an appropriate consistency.
On a bleak winter’s day, I like to whip up a Passionfruit Delicious, a version of the better-known Lemon Delicious. 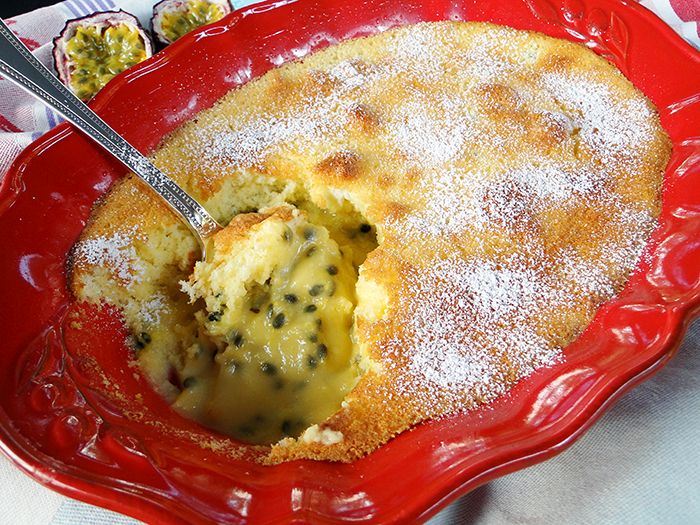 To make this, preheat the oven to moderate (180degC/160degC fan-forced) and grease a 1L – 1.5L pudding dish. Into a mixing bowl, sift 75g (1.2 cup) self-raising flour. Add 155g (3/4 cup) caster sugar, 2 egg yolks and 60g cooled melted butter then beat until smooth. Gradually add 250ml (1 cup) milk and the pulp of 6 large passionfruit (or 8 small). In a separate bowl, whisk two egg whites to soft peaks. Carefully fold the whites through the batter. Spoon into prepared pudding dish and place in a baking tray of boiling hot water (pour in enough to come two-thirds of the way up the sides) and bake for 30 – 40 minute or until golden and just set. Dust with icing sugar and serve with whipped cream. Serves 4.
A little more complicated yet utterly delectable is Damien Pignolet’s Passionfruit & Praline Soufflé. One of Australia’s finest chefs and restaurateurs, Damien is renowned for his eye for detail and French style. 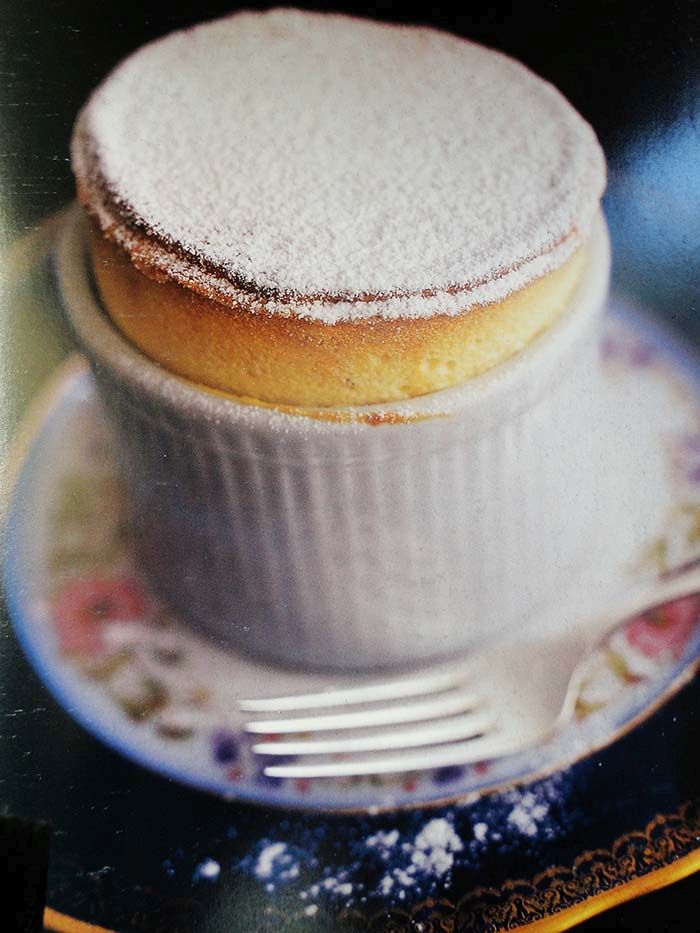 The beauty of this recipe is that while the soufflés (soufflé means to breathe, inflate or puff up) need to be served immediately, the base can be made several hours in advance and kept in the fridge until required.

In a small saucepan, dissolve the sugar in the 50ml of water over low heat. Bring to a boil and cook to a deep caramel registering 170 C on a candy thermometer. Immediately add the nuts, stir well and quickly pour the praline onto a lightly greased baking tray, spreading it out thinly. When it is cold, break into small pieces and pulse in a food processor until the pieces are about the size of a pine nut.

pinch of cream of tartar

Grease 8 chilled and dry soufflé dishes, each 240ml capacity, with the butter and dust with caster sugar.

To make the soufflé base, mix about ¼ of the passionfruit with the cornflour to make a rather wet slurry. In a small saucepan, combine the remaining passionfruit pulp with the 120g caster sugar and stir over low heat, making sure the sugar is dissolved before the passionfruit syrup comes to the boil. Off the heat, add the passionfruit and cornflour slurry to the syrup and cook gently, stirring constantly, for 10 minutes (it will become very thick). Pass through a fine sieve into a large bowl then allow the passionfruit base to cool until it is just lukewarm.

Beat the egg whites until frothy, then add the cream of tartar and beat to firm peaks. Scatter the 100g caster sugar over the whites and continue beating until stiff peaks are formed. Beat ¼ of the egg-white mixture into the passionfruit base. Scatter 8 tablespoons of the praline over the remaining egg-white mixture then pour the passionfruit base on top and fold in quickly but thoroughly.

Fill the prepared soufflé dishes almost to the top, wipe the rims clean and refrigerate until required.

When ready to cook the soufflés, preheat the oven to 175 C. Bake the soufflés for 14 minutes, or until they are well risen. Remove from the oven, dust generously with icing sugar and serve immediately, accompanied by whipped cream. 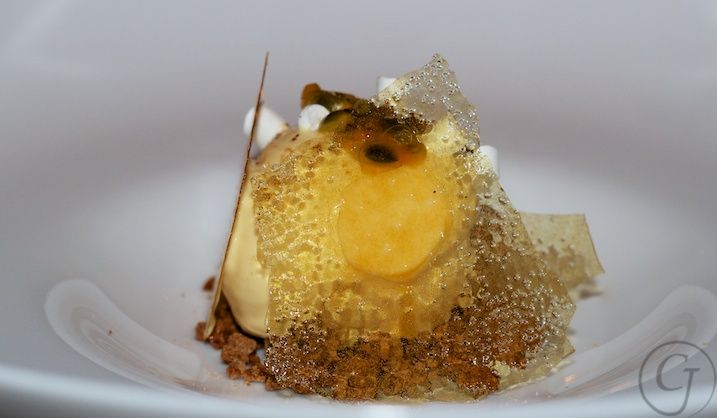 The most sublime passionfruit dessert I’ve ever tasted is Ross Lusted’s Aerated Passionfruit with Roasted White Chocolate, Passionfruit Ice Cream, Passionfruit Seed Powder and a Glass Biscuit at The Bridge Room, a divinely balanced concoction which transported me not just to a tropical beach but to another world.
Ross is the Sydney 2014 Good Food Guide Chef of the Year and this one dish alone demonstrates the depth, complexity and subtlety of his talent. It’s not one for the home cook – unless you happen to be an ambitious Masterchef contestant – because there are six different components including a heavenly passionfruit espuma (or foam) requiring a siphon; the passionfruit ice cream which is steamed in a sous vide bag, massaged, cooled and poured into a Pacojet canister, then frozen and spun just before serving; the roasted white chocolate made by slowly roasting Valrhona Opalys white chocolate; the passionfruit seed powder made with dehydrated ground passionfruit seeds; meringue sticks and a glass biscuit made with maltose heated to the hard ball stage, poured onto a silpat mat, cooled, blended to a fine powder, then baked until melted but not coloured.
The combination of the delicate passionfruit foam with the ice-cream, crisp glass biscuit and meringue was a textural treat while the intensity of the passionfruit seed powder was like a tang of paradise. 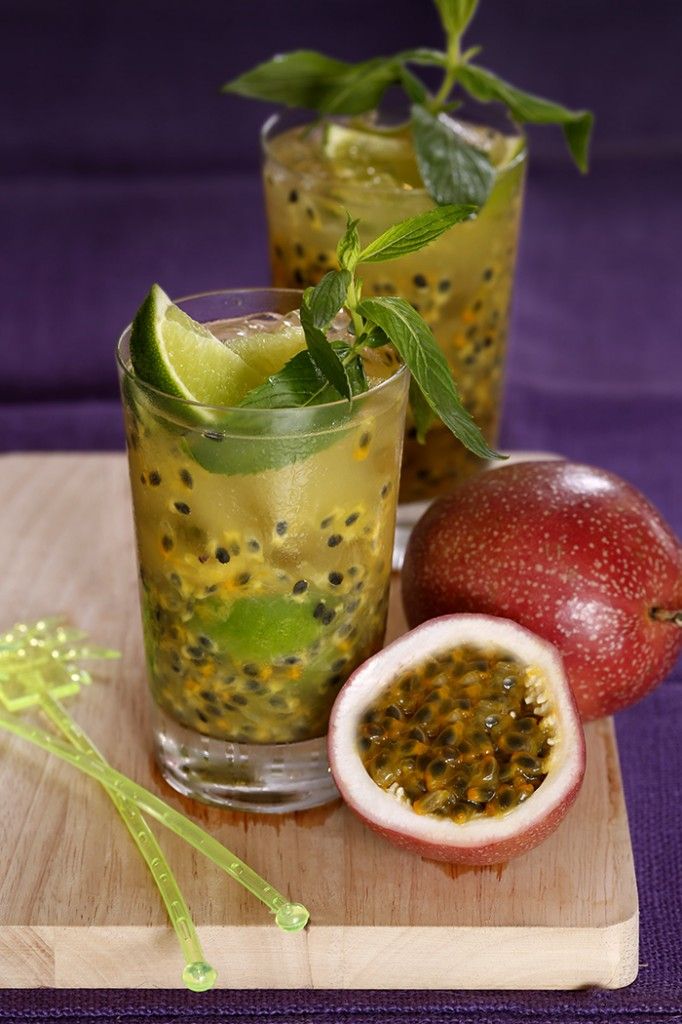 Given that the tropical taste of passionfruit is reminiscent of summer, you might be surprised to know that its peak season is winter (June to July in the southern hemisphere), followed by a second flush between December and February. The most popular varieties are Purples and Panamas, although several types are grown in Australia.
No matter what the season, the good news is that passionfruit pulp freezes well.  When cutting the fruit, just nip the top off to ensure you don’t lose any of the delicious juices then spoon the pulp into ice cube trays. When frozen, transfer to freezer bags.- just spoon it out of the shell into ice cube trays and once frozen, transfer to freezer bags. The cubes are especially useful for adding to smoothies and frullatis, the ultimate in summer drinks.
The juice is also widely used in many countries as a flavouring for confections, ice cream, and other products. If you’d like to make your own juice at home, make a simple sugar syrup with 125g caster sugar and 125ml water. Place the sugar and water in a saucepan and bring to the boil. Flavour with a little rum or citrus juice, if liked, remove from the heat and stir in the pulp and seeds of six passionfruit. The heat helps to loosen the pulp around the seeds without cooking the fruit. When cool, pass through a sieve or muslin and store in a bottle in the refrigerator. 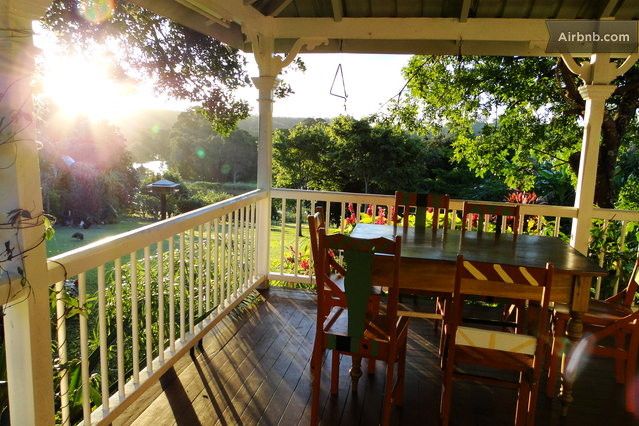 View from the wraparound verandah at Bend of the River

My mother tells me that during her childhood in Townsville, her mother would often make a granadilla pie for dessert. The granadilla was the size of a rockmelon and resembled a giant passionfruit. I’ve never tasted one but apparently it is a fast growing vine which grows only in tropical areas and is also of South American origin.  Perhaps her pie was similar to one of my very favourite recipes for  Passionfruit Coconut Slice.
At Bend of the River, our family farm in south east Queensland my sister Justin makes a fabulous Passionfruit Caipirinha. She takes a long glass and places 1 1/2 limes, cut into eighths, in the base. She then adds 1 1/2 teaspoons of white sugar and muddles the lime and sugar together using the flat end of a rolling pin. When the limes have released their juices and the sugar has dissolved, she adds 30mls of either cachaca or vodka, a good handful of crushed ice and tops the drink with passionfruit pulp.
Sitting on the wooden deck overlooking the river and orchard as the sun sets, with one of her Passionfruit Caipirinhas in hand, is as close to paradise as I’ll get.

2 Responses to Meditation on Passionfruit