I’m re-publishing this article after Osteria Francescana won world’s best restaurant in the San Pellegrino awards again this year: Congratulations to Massimo Bottura and his team!

It would be easy to walk past the world’s Number 1 three Michelin star restaurant and not notice it’s there.
Situated in a back lane of Modena, a small city in Emilia-Romagna in central-northern Italy, the only indication there’s a restaurant behind the front door are three polished brass plaques on a peach-coloured wall. 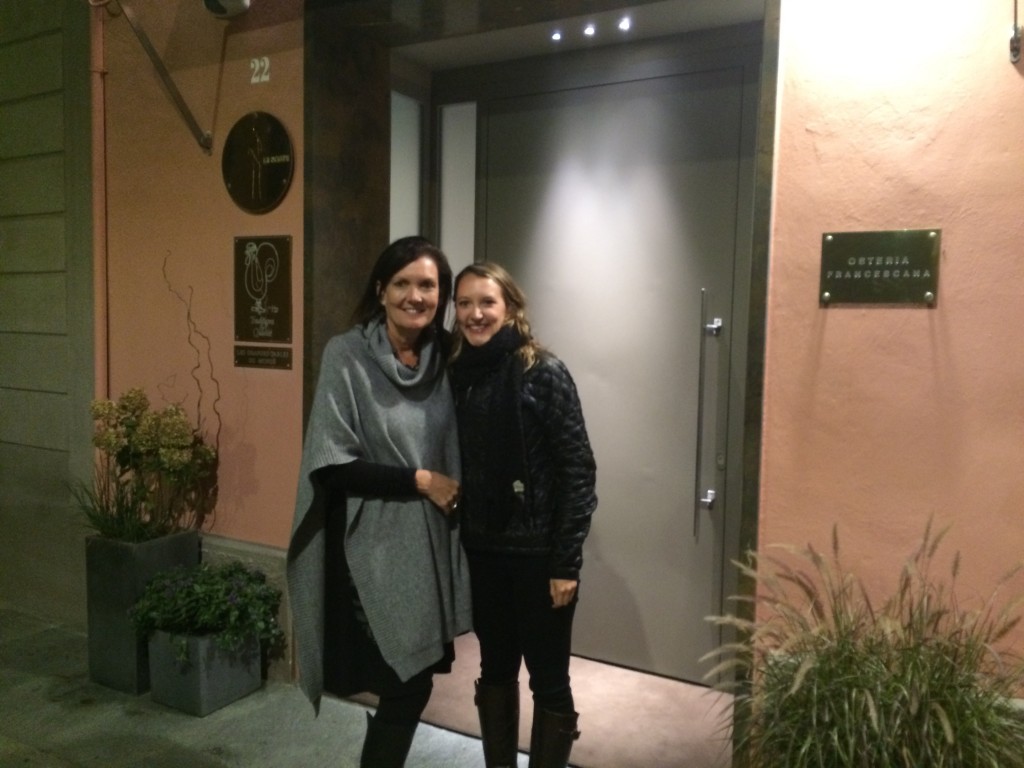 It’s only once the heavy steel grey door opens and you’re ushered inside that you realise you’ve stepped into another world.
I’d heard a lot about Massimo Bottura, the “skinny Italian chef ” of Osteria Francescana, and was very much looking forward to dining in this temple of gastronomy with a few friends, Jenn, Sarah and Hillary.
But I wasn’t prepared for the troupe of seven waiters, dressed in black suits, who suddenly swooped on us asking: “Can I take your coat? Can I take your bag? Can I take your…” 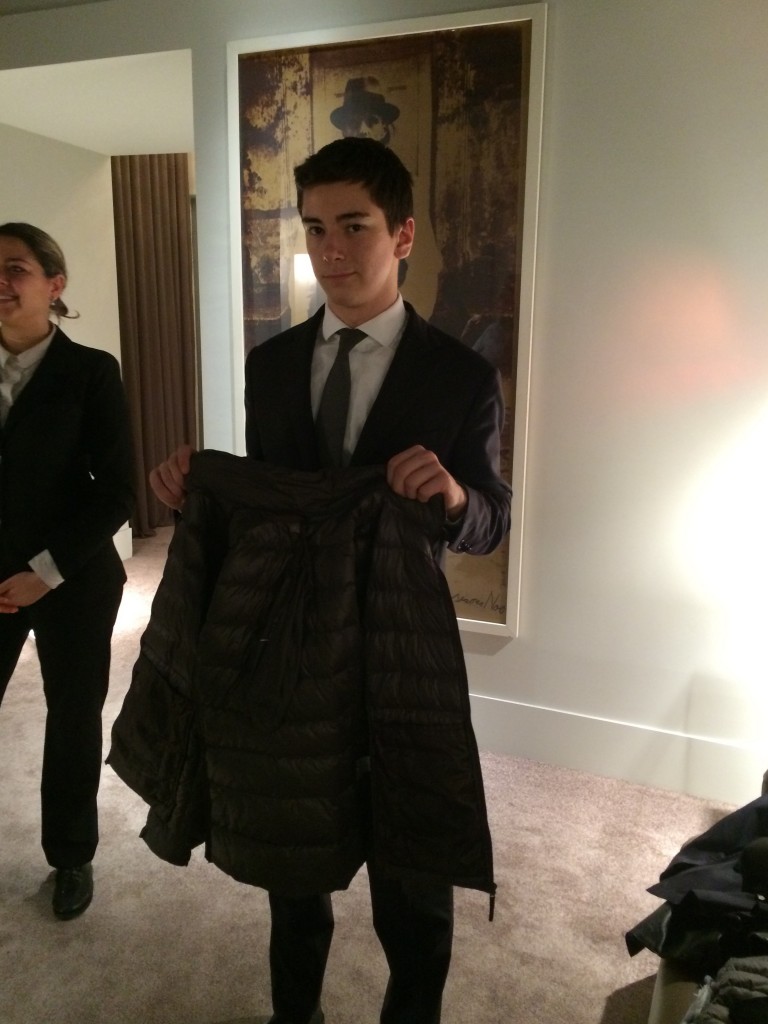 It was an intimidating start. As we were shown into the simple elegant dining room, I noticed a large Damien Hirst multi-coloured spin painting on the wall fronting the entrance.
Perhaps that’s why my head was spinning?  Mr Hirst is not one of my favourite artists.     Or perhaps it was because our roles had unexpectedly reversed and we were being treated as divas and not devotees?
The waiters continued to fuss around us as we were seated and it was only after I could hide behind the gigantic menu for a few minutes that I began to feel more at ease. 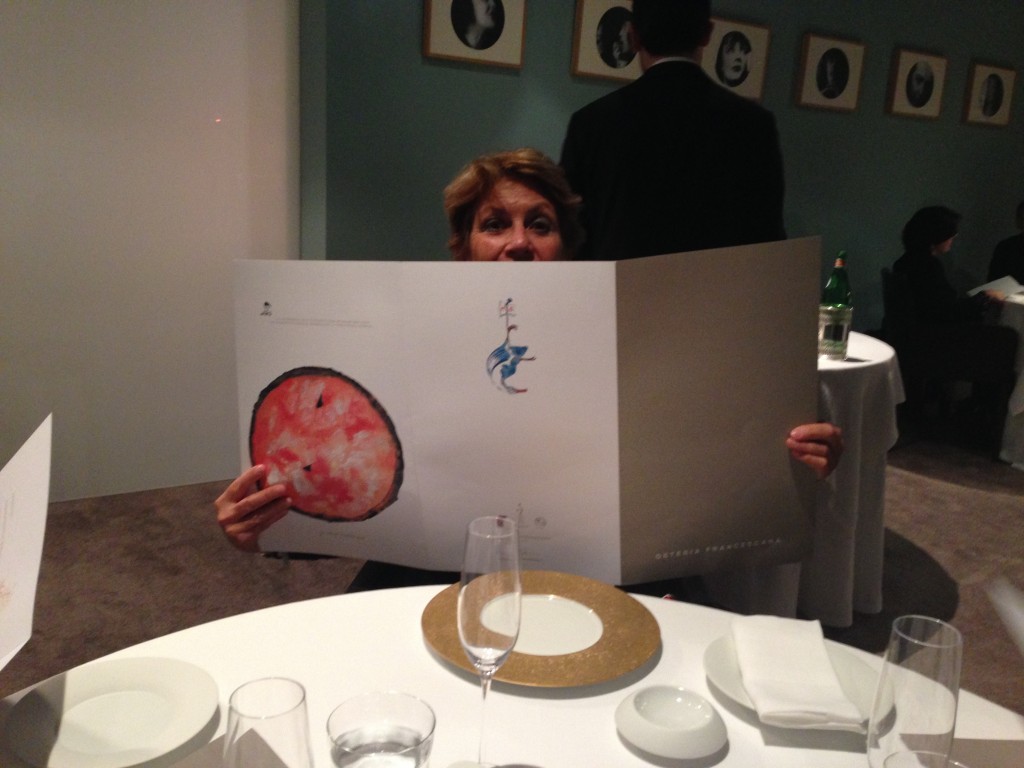 Hiding behind the menu at Osteria Francescana

We were offered the choice of three menus: a full A la Carte menu; Tradition in Evolution which explores Emilian ingredients and traditions from a contemporary point of view over nine courses (170Euros); or Sensations, their latest dishes from the experimental kitchen (195Euros).
It took a while to decide. All four of us opted for Tradition in Evolution, which happens to be in keeping with Bottura’s philosophy of reinterpreting traditional Modenese cuisine through a contemporary lens.
Twenty years ago when he opened Francescana, he’d had a hard time winning over the locals who believed no one could cook better than their mothers and grandmothers, a not uncommon attitude still prevalent throughout Italy today. 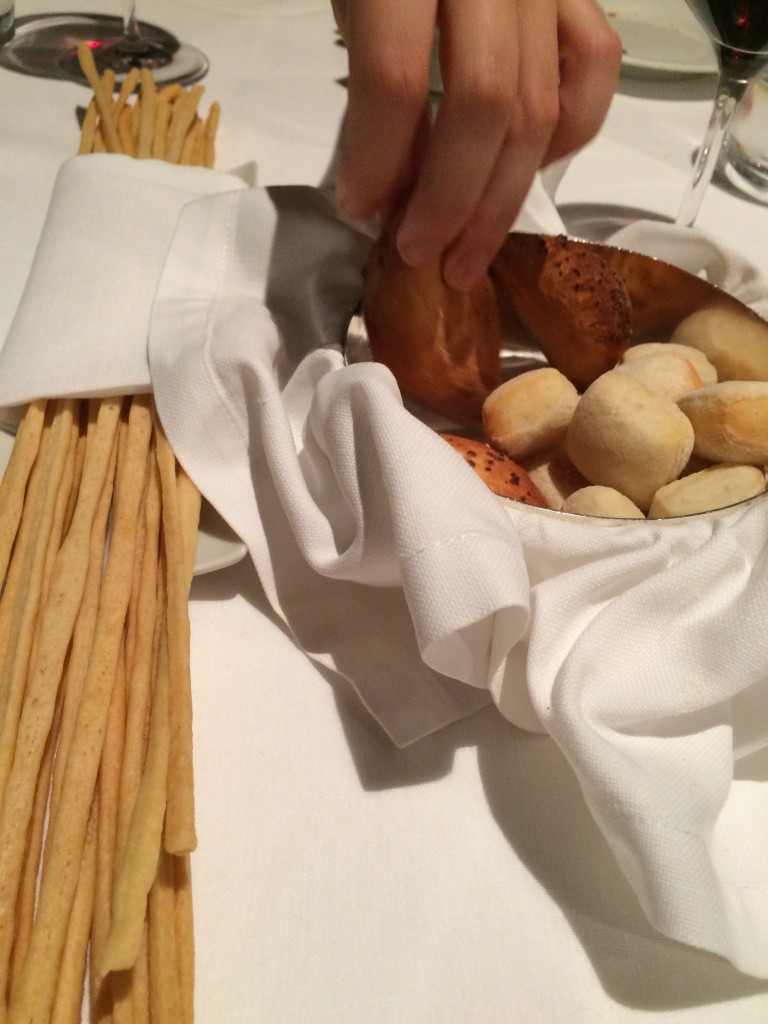 Meanwhile, various waiters placed freshly baked bread and a basket of grissini (breadsticks) on our table and poured golden olive oil into individual white dishes while Rudolph the Red Nose Reindeer played in the background (a funny choice of background music: perhaps a hiccup in the playlist?).
We decided against the wine pairing which would have cost another 110Euros, and settled on a bottle of wine to share throughout the meal.
Our first dish arrived, Memory of A Mortadella Sandwich, a tribute to the mortadella sandwich which Bottura’s mother used to make for him  when he was a skinny kid, always running off to play soccer, and she would chase after him down the street with it.
“Can a recipe ever replace a memory?” he asks in his book, Never Trust A Skinny Italian Chef (Phaidon). 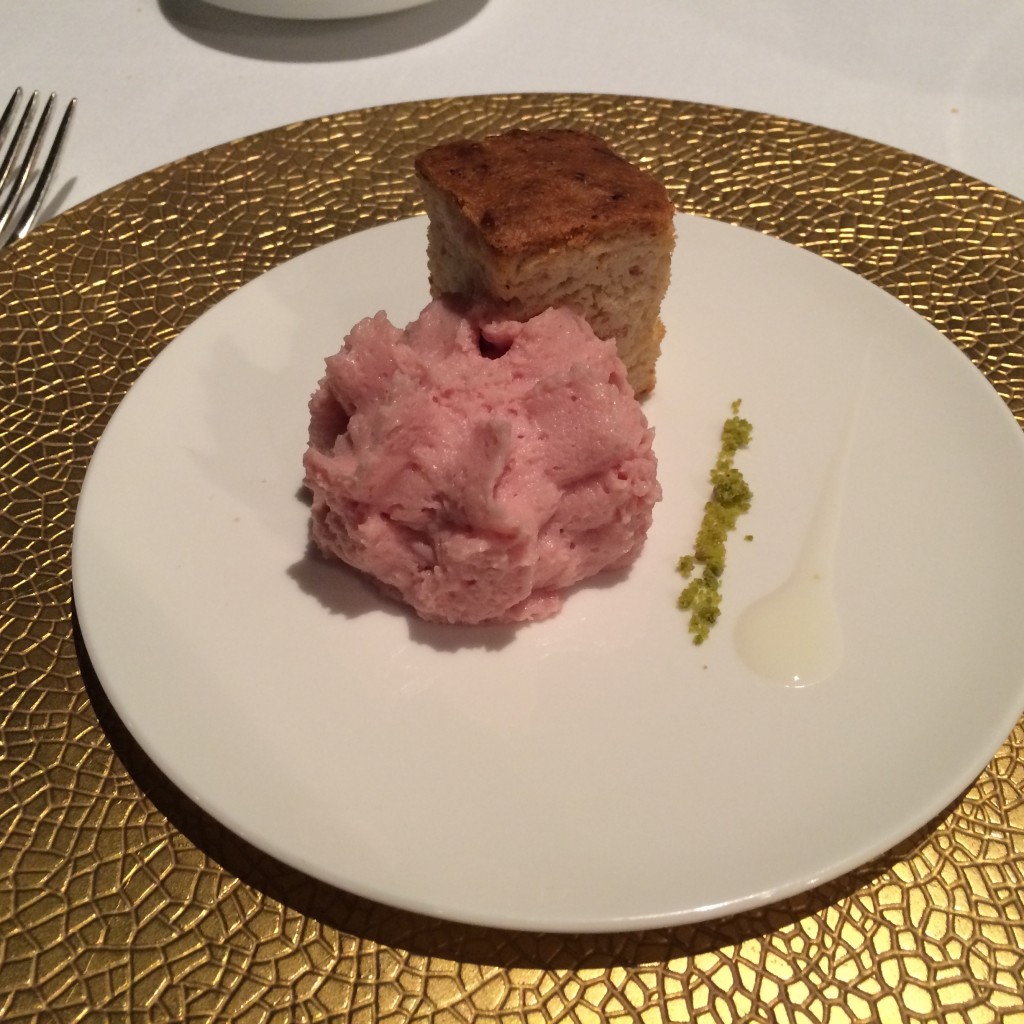 Memory of a Mortadella Sandwich

Mortadella is a heat-cured pork sausage from Bologna which reminds me of devon, an Australian cold meat used in sandwiches which I’ve never liked.
After much trial and error he figured out how to make a foam from the mortadella, eliminating and refining the garlic and pistachios which are then placed next to the foam.  It was served with a toasted square of gnocco ingrassato, a local flat bread laced with lard and was “all about reducing an element to its essence. I was chasing a memory, and what is a memory if not a pure essence distilled by time?”
Today, it’s one of the dishes he can’t take off the menu because guests keep asking for it.
“It’s funny how hard it is to let go of the thing I spent most of my youth running away from.”
I loved it: the foam was light and airy and imbued with flavour and, who knows, may very well become a favourite food memory for me.
Next to arrive were foie gras popsicles which looked to me like Gaytime paddle pops, a popular treat for kids in Australia. Crazy, eh?
Foie gras “ice cream” with a molten core of traditional balsamic vinegar from Modena and coated in crushed hazelnuts and almonds. Unlike Gaytimes however these were very rich and intense, with a sweet- sour flavour and disappeared in a couple of bites. 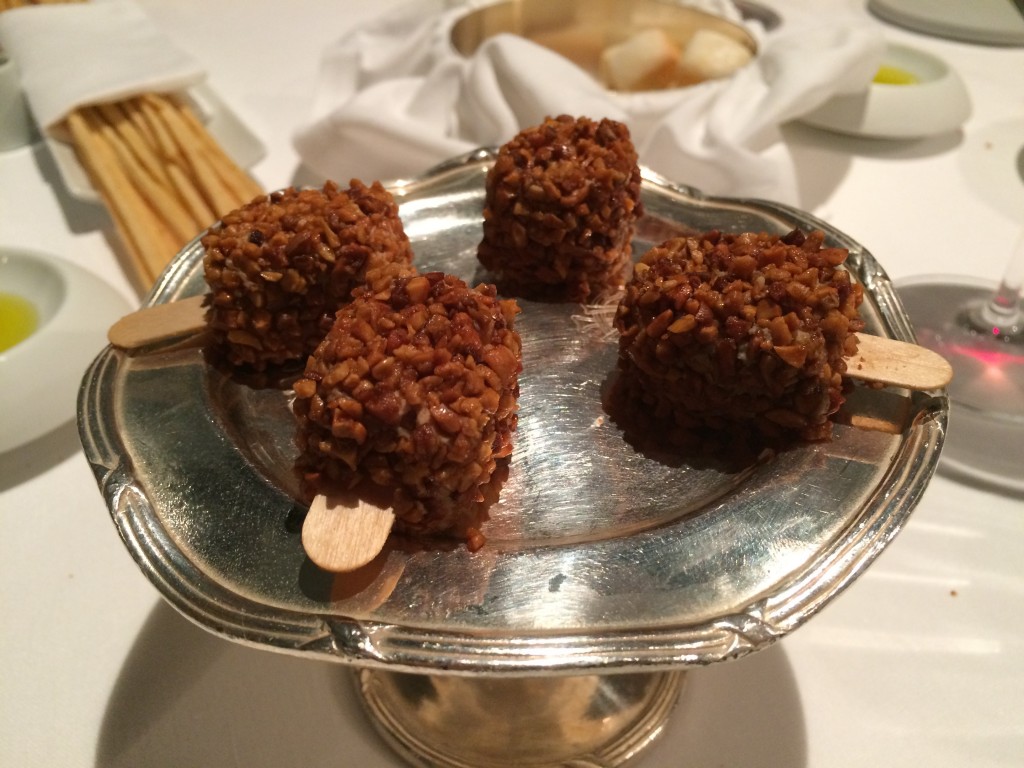 Can you guess what the next dish is called? It’s one of Bottura’s signature dishes and is An Eel Swimming Up the Po River. The Po is the most important river in northern Italy, winding its way through a number of regions and the story is about an eel who will do anything to find her roots. The eel is first cooked sous-vide, then baked with a sauce similar to teriyaki but using the local saba, a sugary cooked grape juice. It’s accompanied by creamy polenta and  apple sauce (both apples and corn are grown on the Po River plain), and sprinkled with burnt onion powder. I enjoyed the fatty richness of the eel, but would have liked a little more of each of the sauces.
Bottura says this recipe is as close to a self portrait as any in the book: “I have often felt like an eel swimming upstream against the current, too stubborn to swim with the others, always looking for something…”

An Eel Swimming Up the Po River

Caesar Salad in Emilia (a nod to his time spent as a chef in the U.S.): a simple looking albeit perfect baby romaine lettuce on a white plate, dressed from the inside out with 22 ingredients including crispy parmigiano wafers, aromatic herbs, mustard seeds, cured, air-dried grated eggs, a few drops of intensely flavoured anchovy extract.  Unlike any Caesar Salad I’ve ever had, it was delicate, flavourful and left me hankering for more. 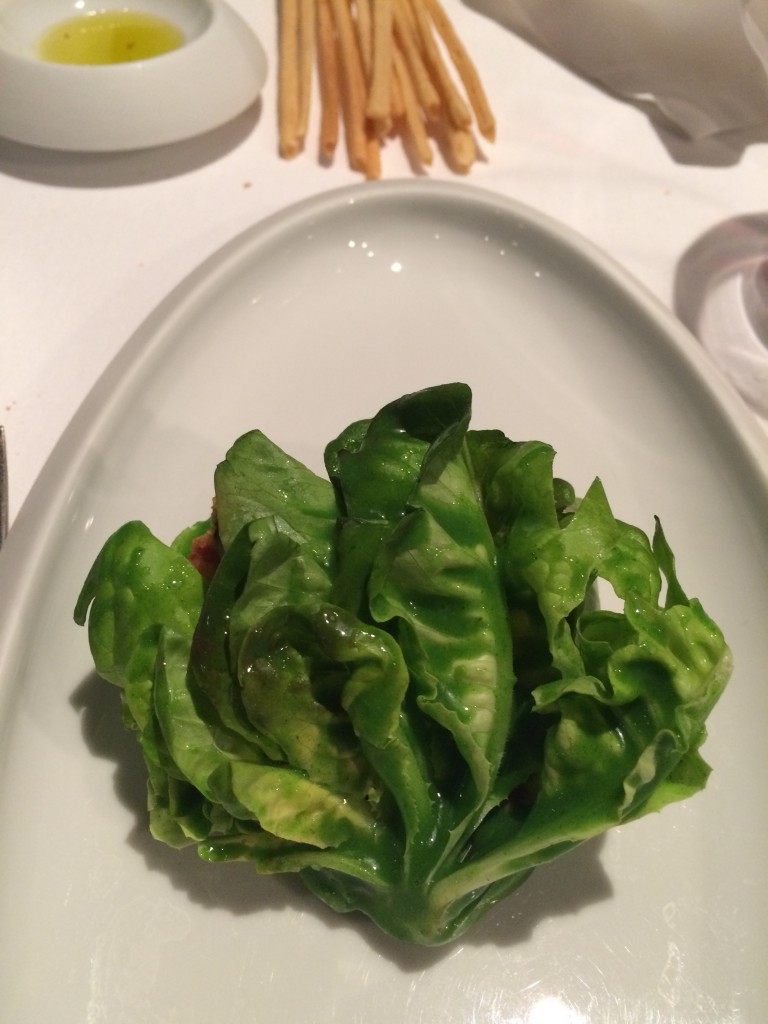 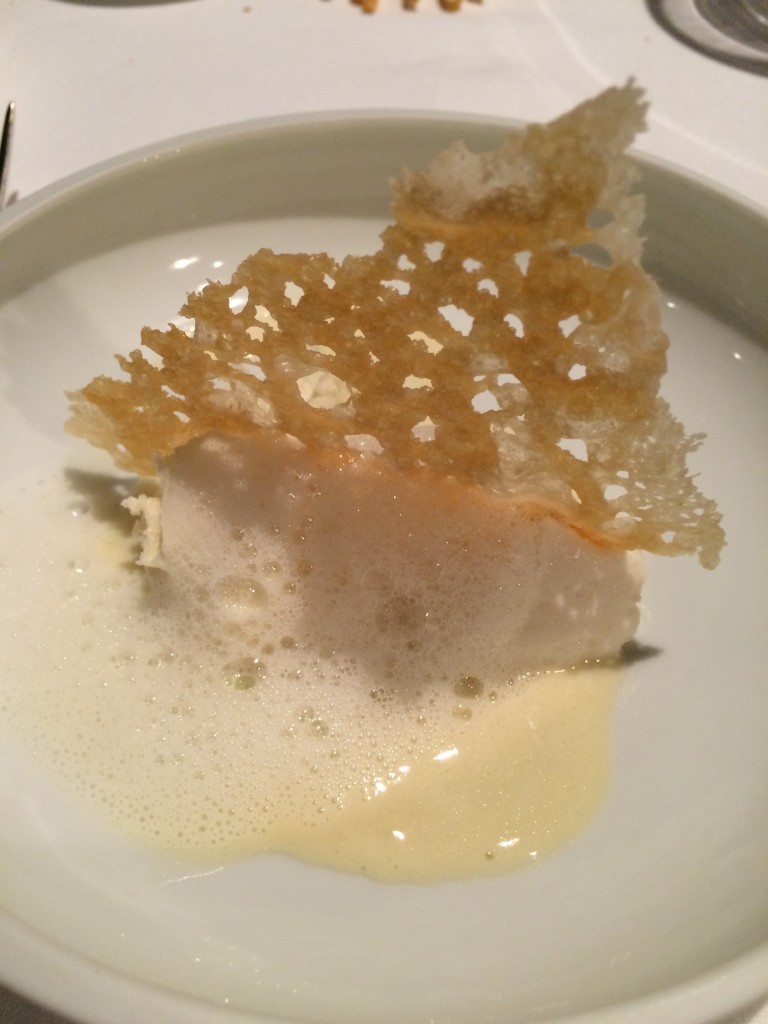 As a kid, Bottura loved the crunchy part of the lasagne and was notorious for stealing the edges of the toasted top layer which for him was the best part, hence the name of this dish. I picked up each crispy lasagne sheet and scooped up the luscious ragu (made with hand-cut meat) and aerated béchamel which lay in a small pool underneath. Certainly the most unusual lasagne dish I’ve ever eaten. 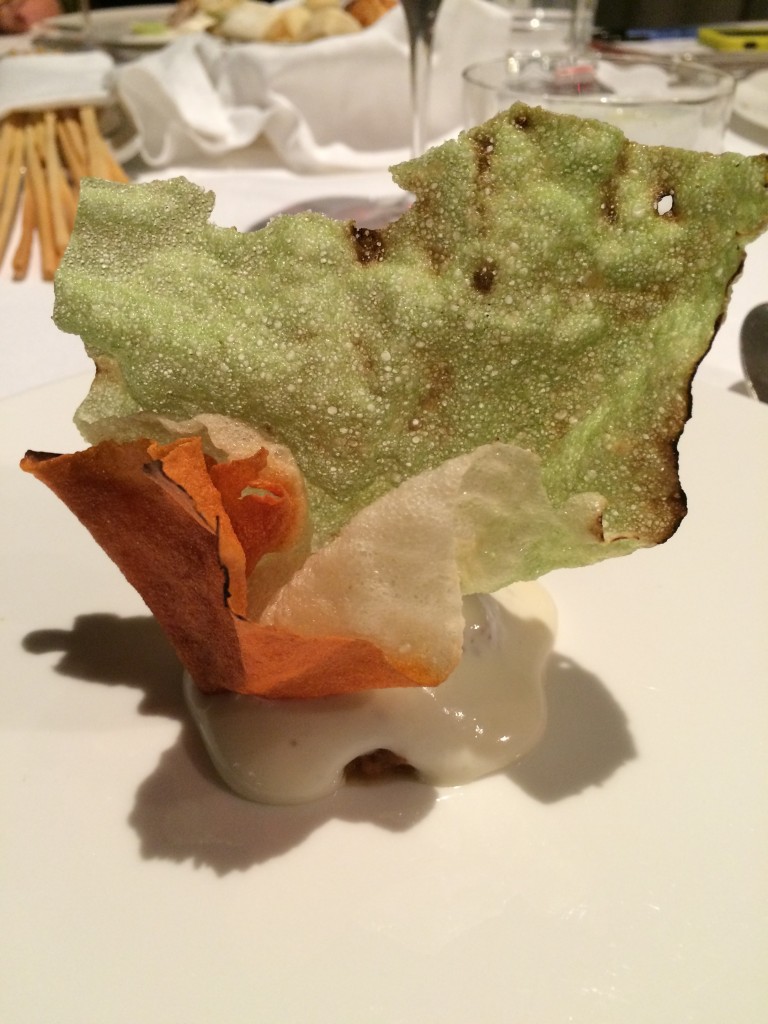 Is it a bird, is it a butterfly? No , it’s the crunchy part of the lasagne

Thankfully my head had stopped spinning by the time the next dish arrived. Its psychedelic splatters of concentrated herb and vegetable sauces and reduced traditional balsamic vinegar are a nod to the Hirst spin painting in the foyer. The meat is neither flame-grilled nor veal, but Tuscan Chianina beef marinated in milk, then rolled in carbon ash, vacuum-packed and cooked at 64degC (the sous-vide method of cooking is done by immersing a sealed package in a closely controlled water bath for hours). It emerges completely black on the outside and uniformly pink on the inside. It was as tender as veal but was almost too perfect for me. I prefer a bit more texture and and marbled fat through my meat. 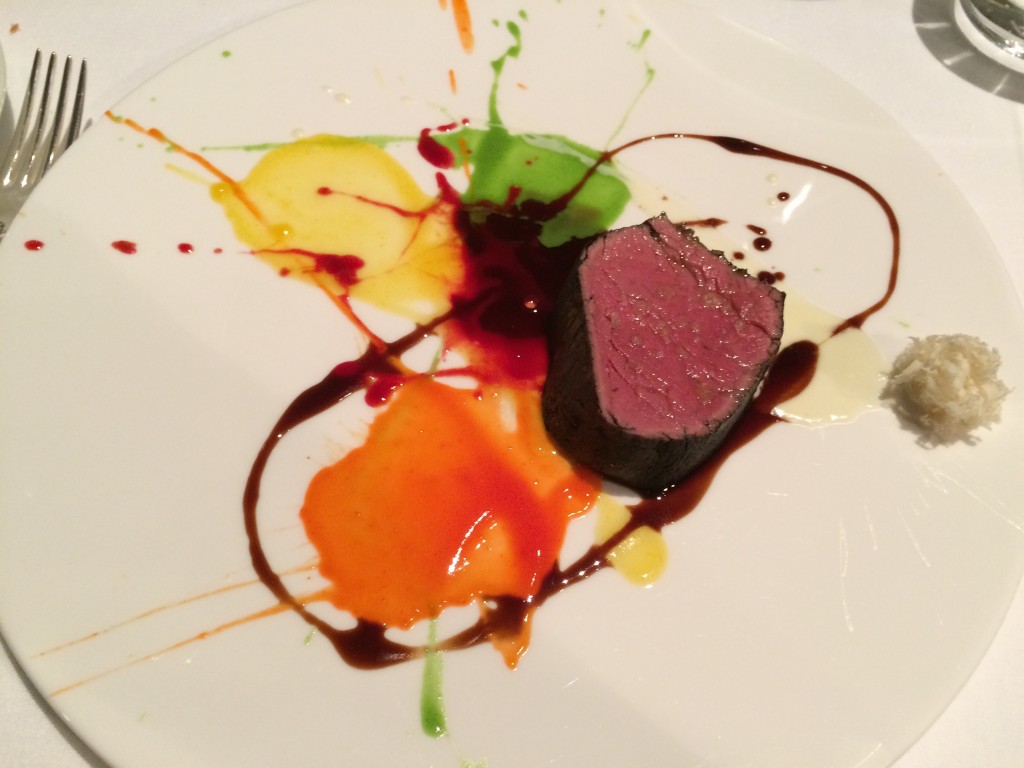 The delicate, light La Torta di Riso with its crispy rice doily exemplified Bottura’sphilosophy of using one element (in this case rice) and using it in a variety of ways, in this case cream of rice, ice cream and crispy rice wafer. More, please. 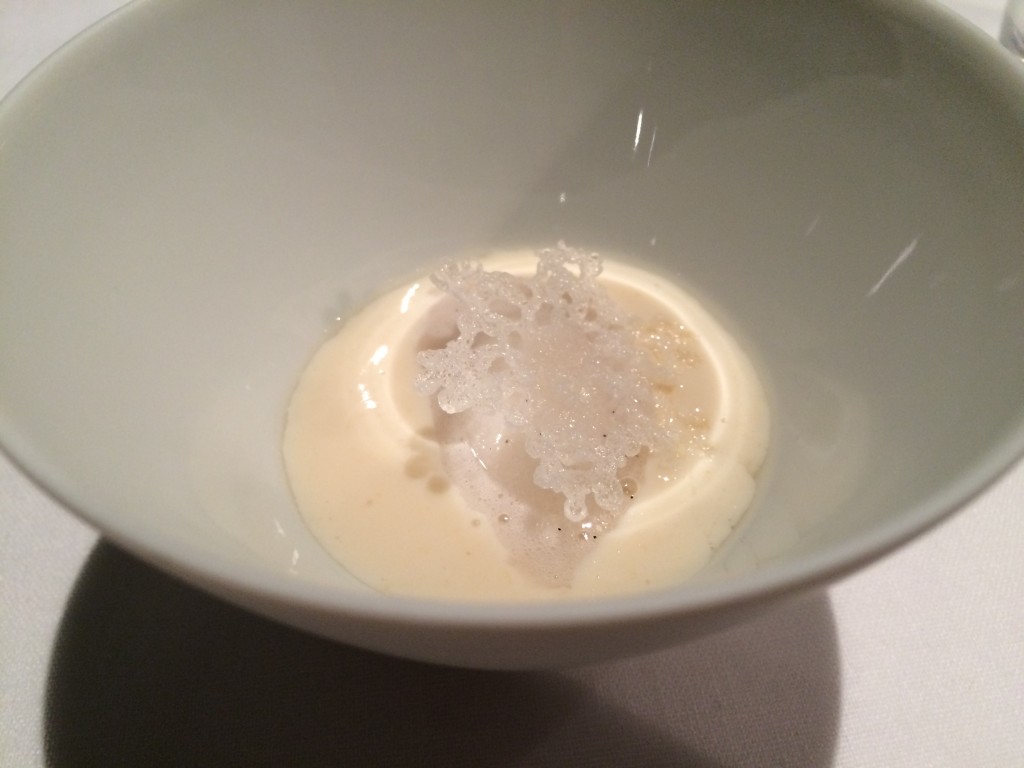 Finally the famous “Oops! I dropped the lemon tart, a dish inspired by sunny southern Italian ingredients (lemons, limoncello, bergamot, capers, chilies and oregano) and by an accident with a happy ending. As Bottura tells it, two identical tarts were leaving the pastry counter when one slipped out of the pastry chef’s hand and slid across the counter, breaking the plate and crust into a golden mosaic.
“In that instant the dessert revealed itself for the first time, and the lemon tart has never been the same. It is broken again and again. The ritual reminds us that breaking is a beginning not an end.  Break, transform and create.” It disappeared too quickly, I wanted more. 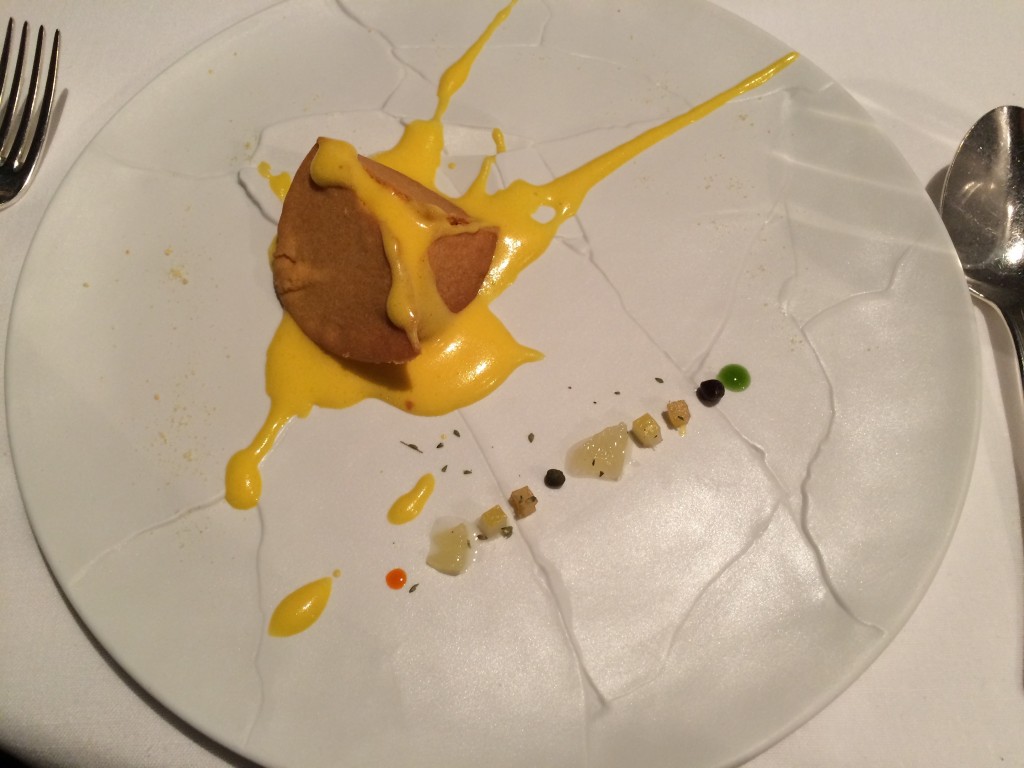 Oops! I dropped the lemon tart

We didn’t order coffee but were presented with a plate of  exquisite chocolates, one of which was made with Vignola cherries from a nearby town famous for its cherries. Filled with cherry liquor, it exploded in my mouth, stealing the show from the other two chocolates (one hazelnut – with the gold top – the other almond). 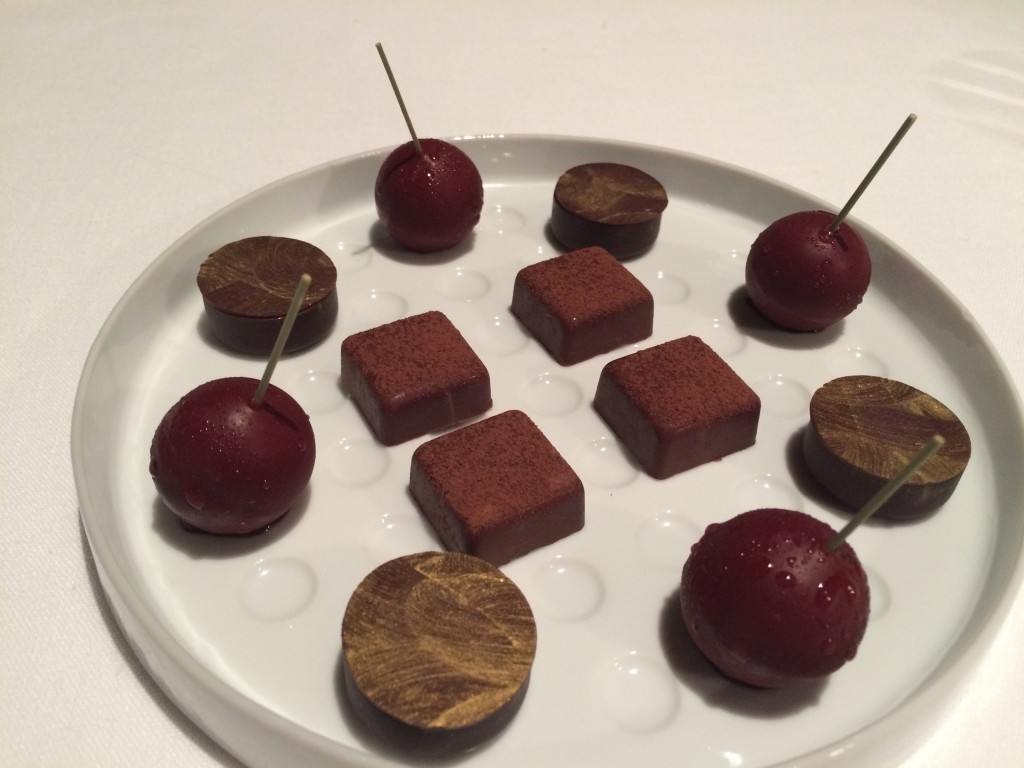 This year Bottura stole the show from other Italian chefs, ranking No. 2 on the San Pellegrino list of the World’s 50 Best Restaurants, the holy grail of restaurant rating systems.
Not only has he widened the debate over modern vs. traditional cuisine, but he has done so in a quiet back street of Modena.
The very name Osteria Francescana is a paradox: in Italy, osteria refers to traditional food typical of the region where it is situated.  In 1994 Bottura rented the small building which had once been an inn named Osteria Francescana after San Francesco, the neighbourhood’s thirteenth-century parish church and restored it.
Seems he can’t help himself and is always playing with tradition.  I love how he weaves stories about his family (especially his mother) art, terroir and history in and out of his dishes. He is a true new millennium conceptual artist.
As we left, he appeared outside the front door, having promised earlier to farewell us.
We had a photo taken with him.  He disappeared quickly, only to rev past us in a sparkling brand new Maserati. 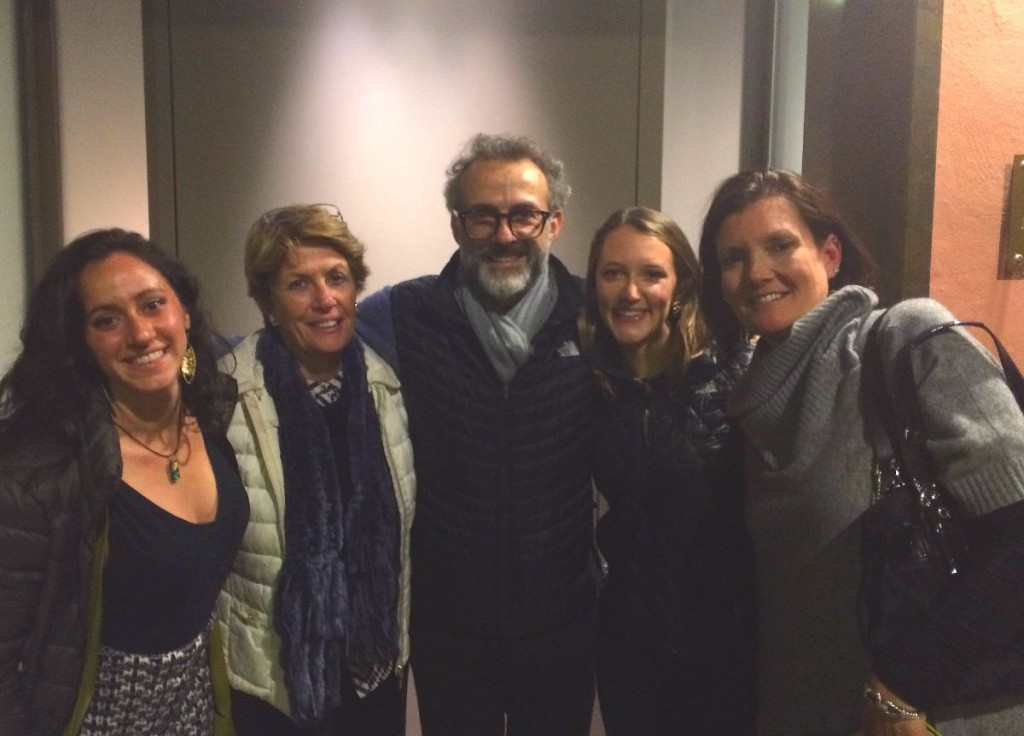 We found out the next day that he’s the new ambassador for Maserati, one of the luxury cars for which Modena is famous.

2 Responses to Osteria Francescana: Everything Old is New Again