It’s a warm sunny Spring morning in the thriving metropolis of Tashkent, capital of Uzbekistan, Central Asia.  As we drive along one of  the many busy multi-lane boulevards in the city, I can’t help but notice the amount of construction going on. 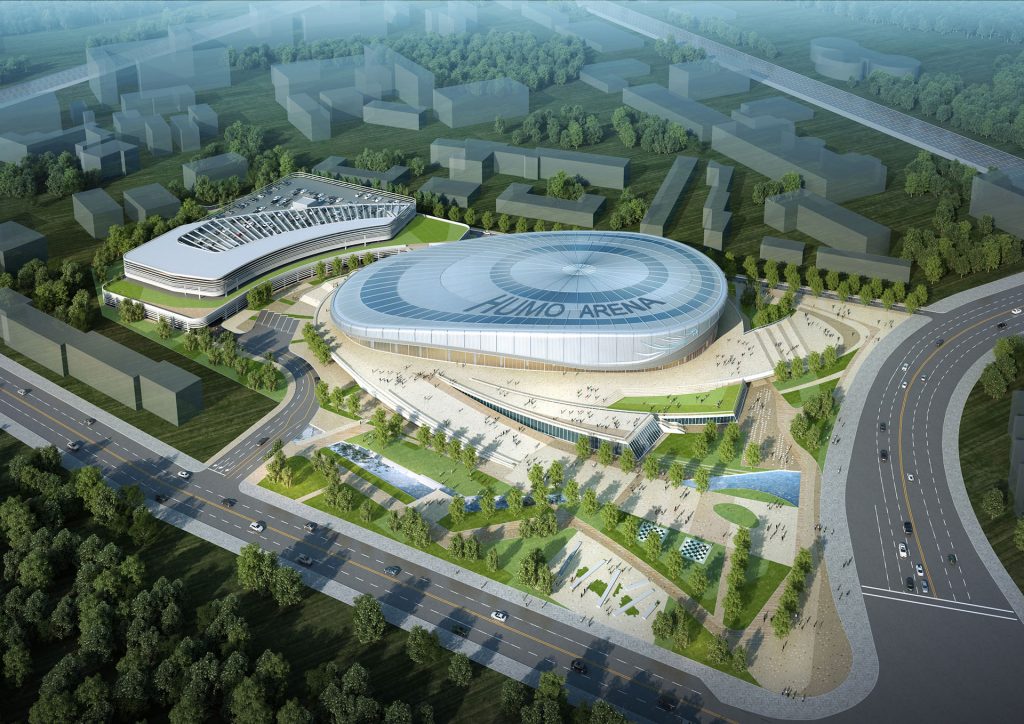 A massive new skating rink is underway, a major presidential promise made by President Shavkat Mirziyoyev in the 2016 elections, the Friendship Among the People plaza is being restored, and the Tashkent City International Business Centre – which will include business centres, shopping complexes, hotels, offices, a congress hall, exhibition halls, multi-storey modern houses, social and other facilities – is being constructed over 80 hectares.
According to Mirziyoyev, “Tashkent City should become a new city within the city, fully reflecting the whole potential of Uzbekistan, developing at a high pace.”
I’m astonished by how modern and bustling it is.  I just hope Mirziyoyev doesn’t turn it into another Ashgabat, capital city of neighbouring Turkmenistan, jokingly referred to as “city of the dead”. 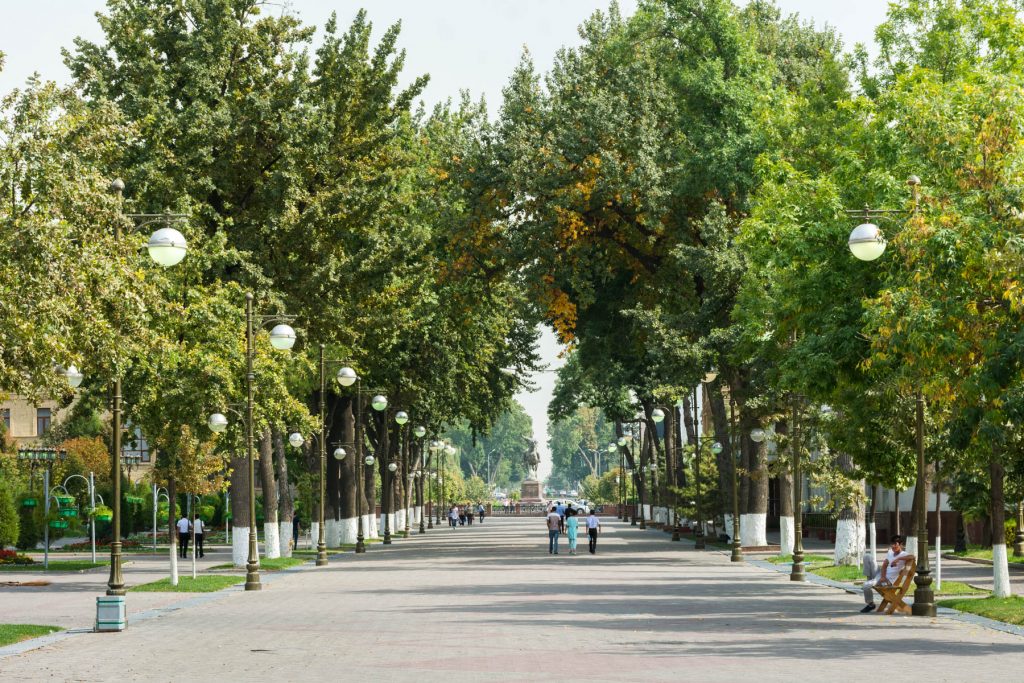 Tashkent (which means “Stone City”) is rapidly undergoing an Uzbek spring, though many are worried the changes being made are mere cosmetic tinkering.
Many of the historic mahalla districts are being torn down to be replaced by shiny new white marble apartment blocks and glitzy new developments.
We’re heading to Rakhimov Ceramics, a famous ceramic studio in one of these mahallas and the moment I step through the front doors, I feel as if I’m in a different world. 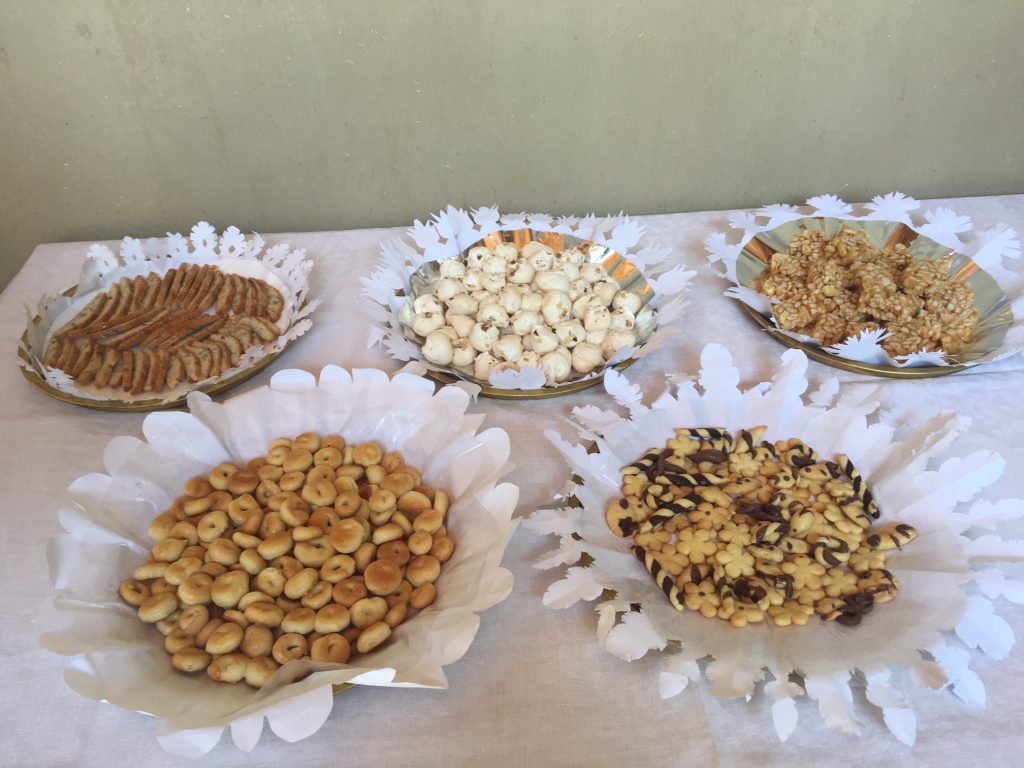 The table of homemade biscuits, meringues and petits fours

A table with myriad biscuits, cakes and tiny meringues is set out at the end of a gallery lined with colourful ceramic plates and terracotta amphoras .
Alisher Rakhimov, his wife Disbar and father Akbar greet us warmly, welcoming us to the family’s workshop and exhibition centre which winds around a leafy courtyard of pomegranate, apricot, fig, cherry and almond trees. 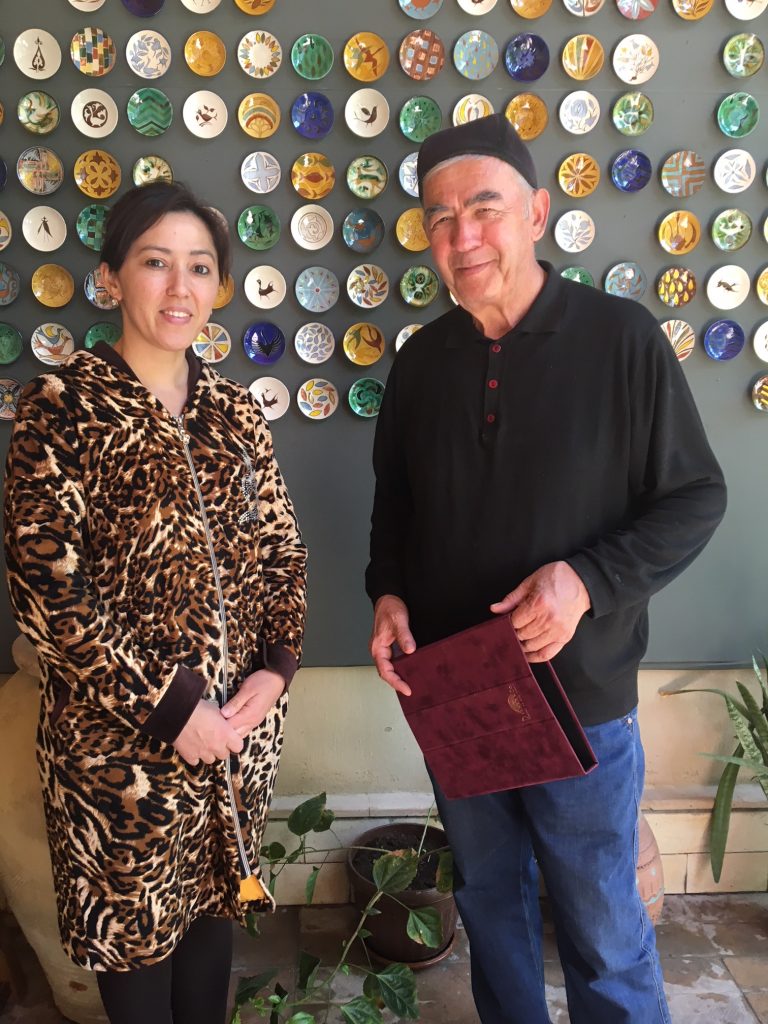 Dilbar and Akbar Rakhimov some of their small glazed ceramic plates

We are offered tea and Alisher hands around an attractive terracotta ceramic plate, asking us to break a few pieces off the sides – and – yes – eat them! It turns out the plate is edible and that the crispy pastry is sweet and delicious. I find out later that it’s Lochira, a famous Tashkent flat bread. 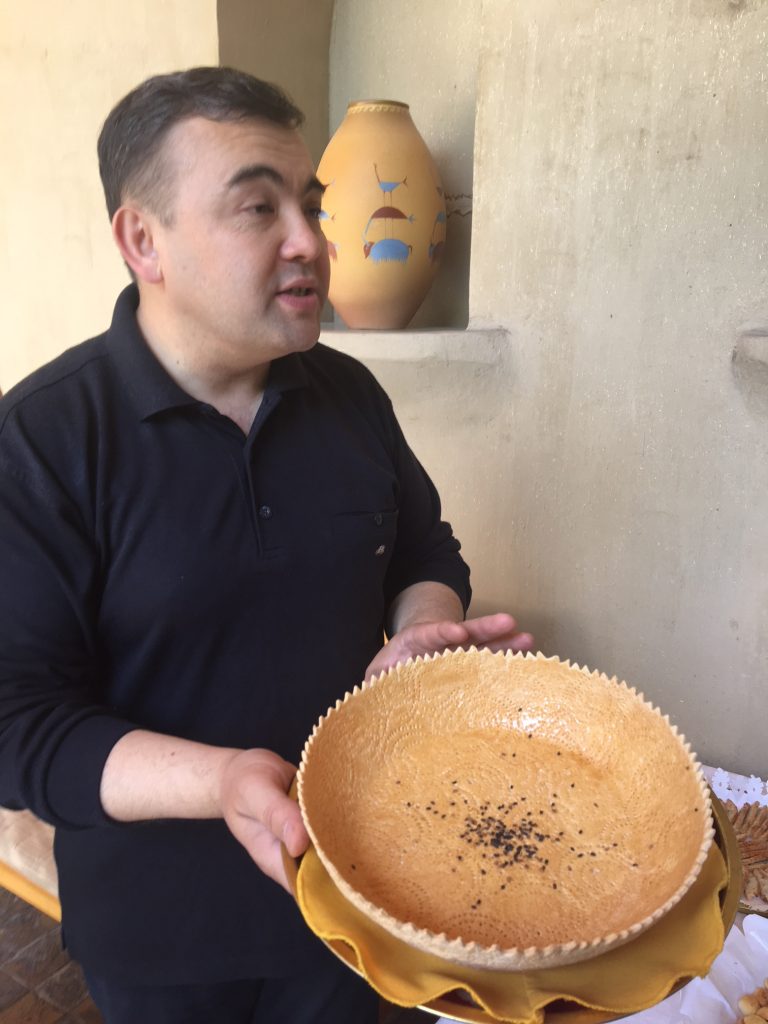 Alisher with the edible ceramic plate

Uzbekistan is renowned amongst the countries of Central Asia for its ceramics which date back thousands of years. Secrets of craftsmanship were passed from one generation to another.
“During the Soviet era (which lasted 70 years) private businesses were forbidden,” explains Alisher.
“So my grandfather worked from home and wrote The Artistic Ceramics of Uzbekistan  which explains the different patterns and symbols used in Uzbek ceramics.
“He was inspired by ancient ceramics found in archaeological digs and also explained how to prepare the clay found in Tashkent, Bukhara and Samarkand.” 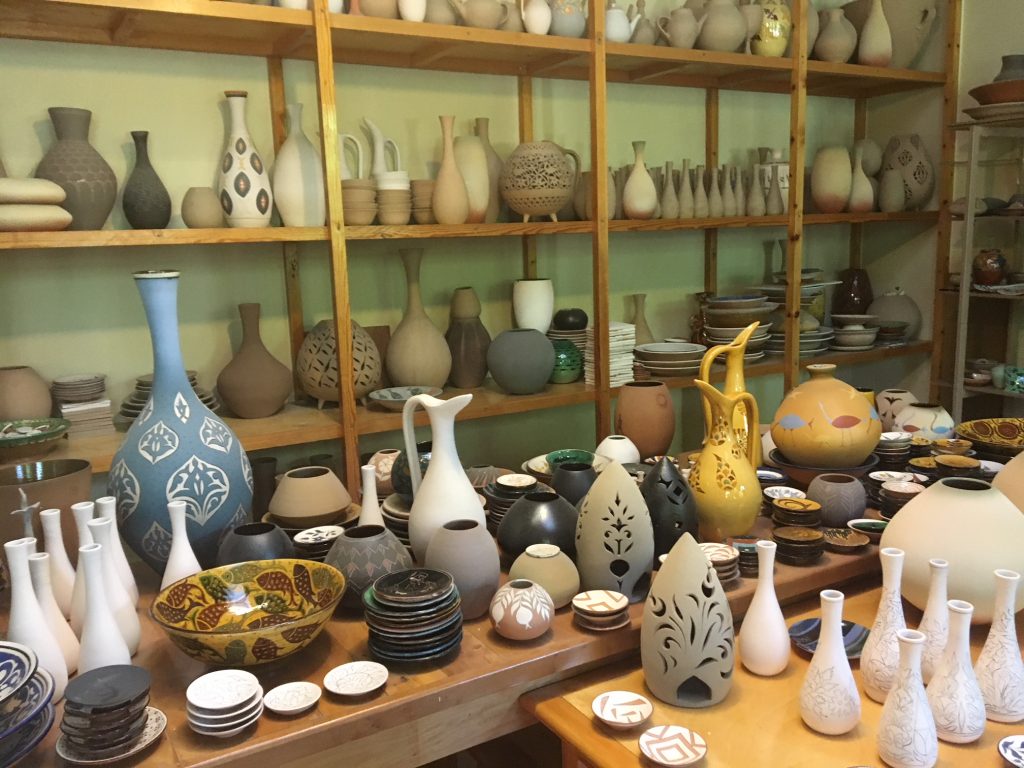 Rakhimov Ceramics was opened  to the public 16 years ago and now exports beautifully glazed plates, bowls, pots, vases and urns to many countries around the world. Alisher leads us around the workshop, out through the leafy courtyard and into the exhibition area (photography is not allowed here) to look at the finished glazed ceramics.
Hearing that I’m a food writer, Akbar kindly takes me into his library to show me a magnificent new cookbook, 365 Days of Sun, which has just been released and will be available online in English by the end of this year.
Recipes for regional versions of plov are included (e.g.. Tashkent plov), manti (delicious little meat dumplings), lagman (noodles), dumgaza shorva (oxtail soup), mashkurda (a famous Uzbek soup with meat, rice and vegetables), Samarkand non (shiny large Samarkand bread baked in the tandoor oven), and mulled quince. 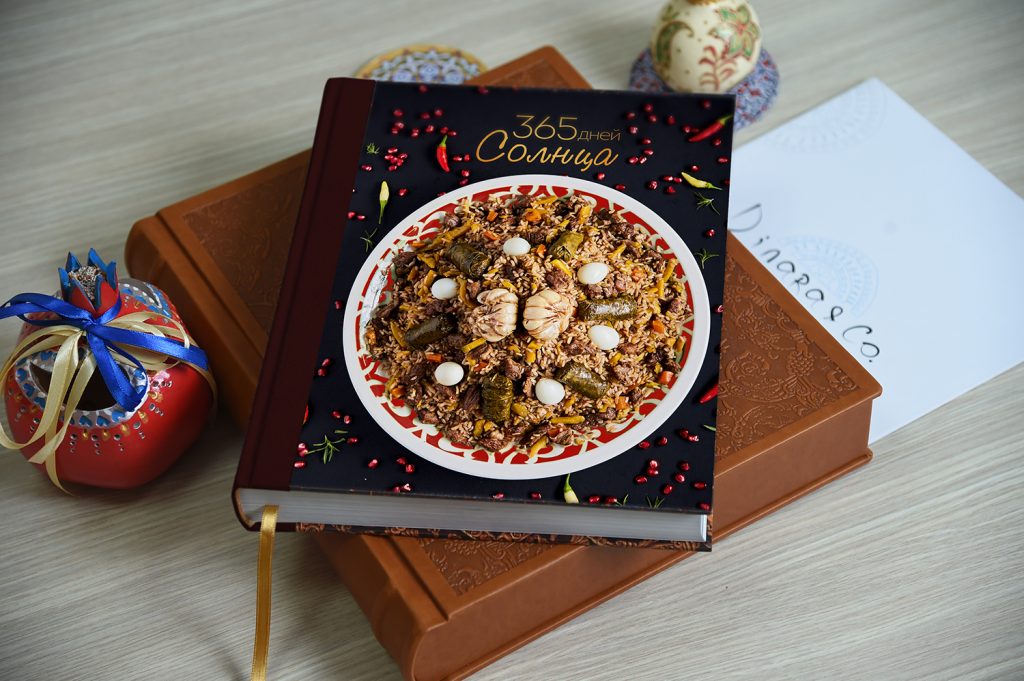 365 Days of Sun: a gastronomic journey across Uzbekistan including recipes,  ancient legends, traditions of hospitality and picturesque regions of the country

Not far from Rakhimov Ceramics is Chorsu Bazaar, near what’s left of the Old Town (Eski Shahar). Some of the mudbrick houses here date from the 14th century – stroll around and you’ll easily get lost in the labyrinth of narrow streets dotted with ancient mosques and madrasas. 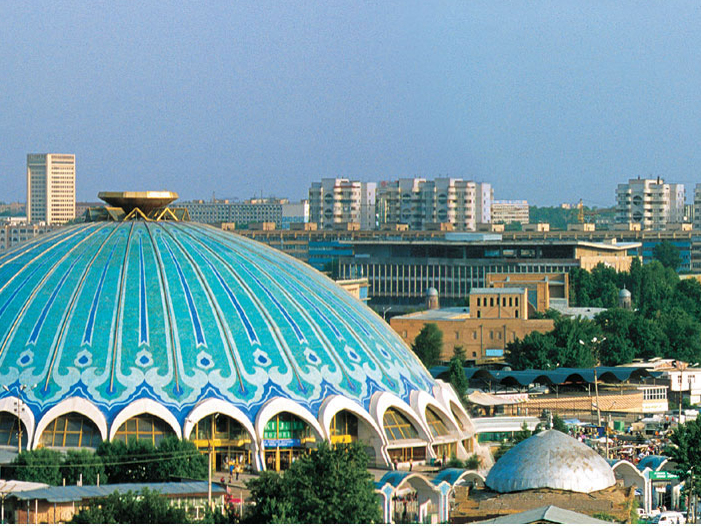 And you can easily get lost – as I did –  in the Chorsu Bazaar, a lively, bustling marketplace which has been here since the 14th century though in various guises (the large turquoise dome was built by the Soviets after the 1966 earthquake).
Spread over 40 hectares of myriad halls and streets selling everything from fresh fruit and vegetables to DVDs, knives, baskets and clothes, it’s where I felt in touch with the throbbing, colourful life of the locals and could have spent a whole day there.
“For us, the bazaar – or souk – is our mother, our father,” explained our guide Bek. “It’s where we learn about real life.” 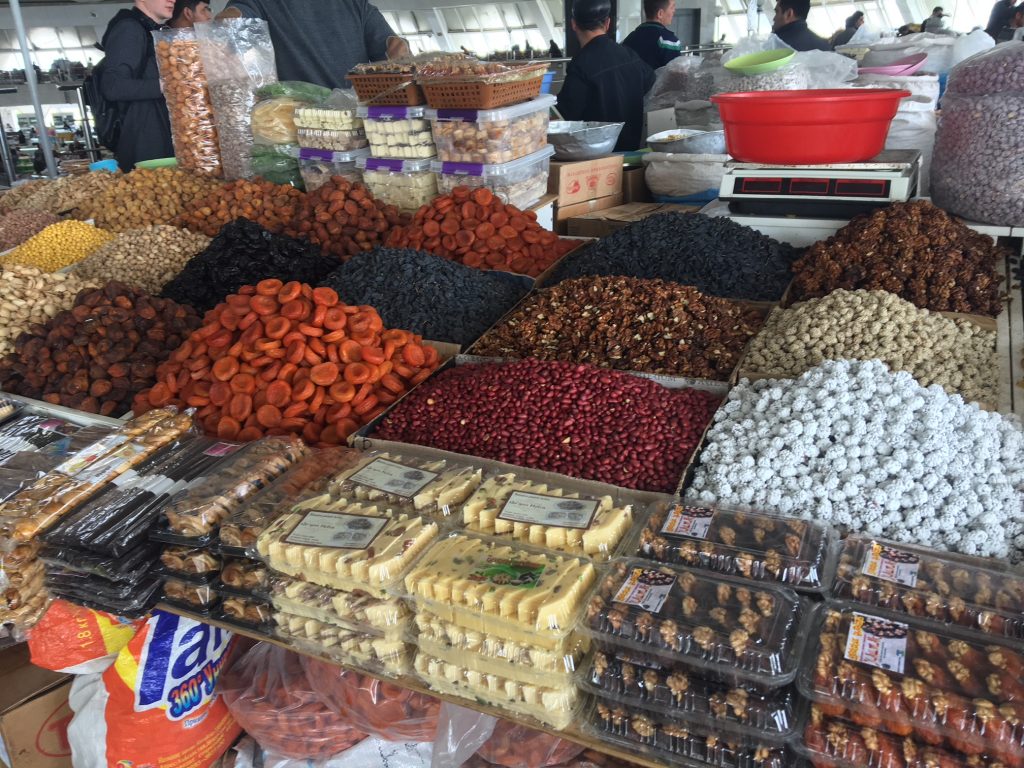 What the new city of Tashkent lacks, Chorsu more than makes up for with its colourful spices, dried goods, local farmers, street vendors and chaykhonas (tea houses) where you can taste fragrant plov (or pilaf – the national dish of Uzbekistan), grilled kebabs (shashlyks), shurpu (soupy stew) and delicious non (freshly baked bread from the tandoor). 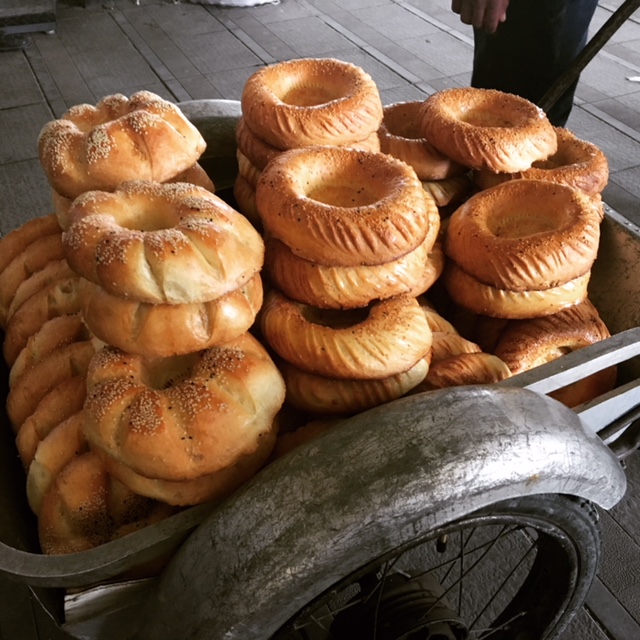 Sadly, I only found out after our visit that there’s an entire hall devoted to baking non: see here. I would love to have seen the bakers shaping the dough and stamping the tops with the chekich (a wooden handmade stamp for making the center pattern of Uzbek bread). 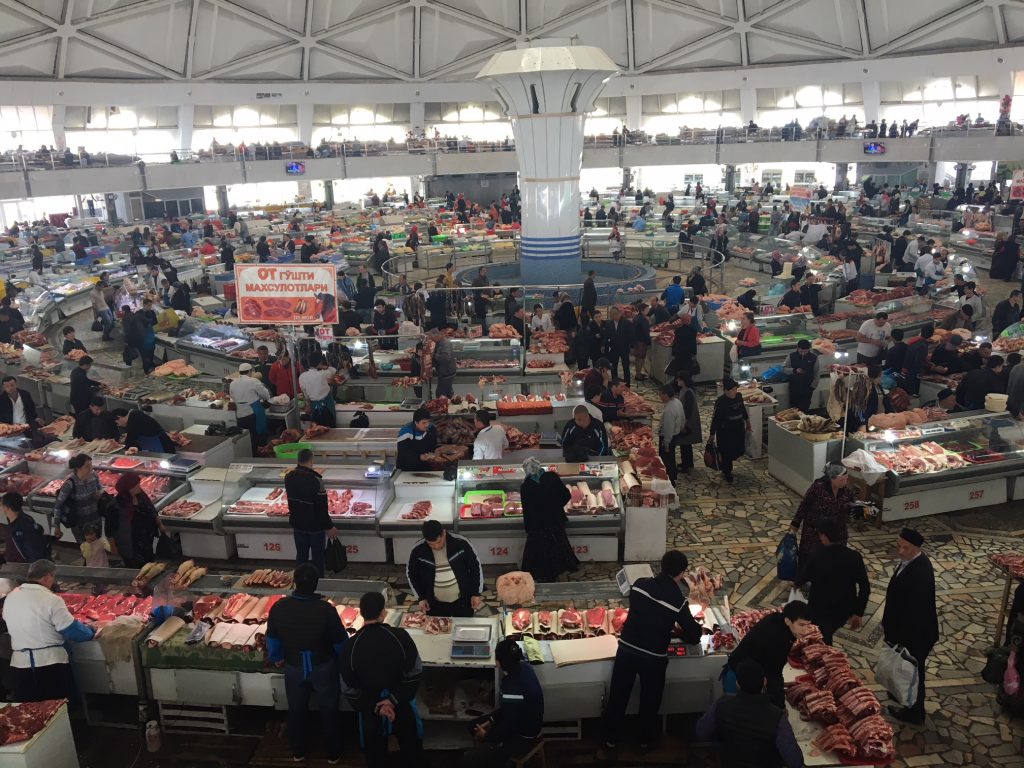 Inside under the large turquoise dome are two levels. Downstairs the stallholders are set out in concentric circles with many Russian, Korean and Armenian stalls. I was astonished by the mounds of pickles on sale. 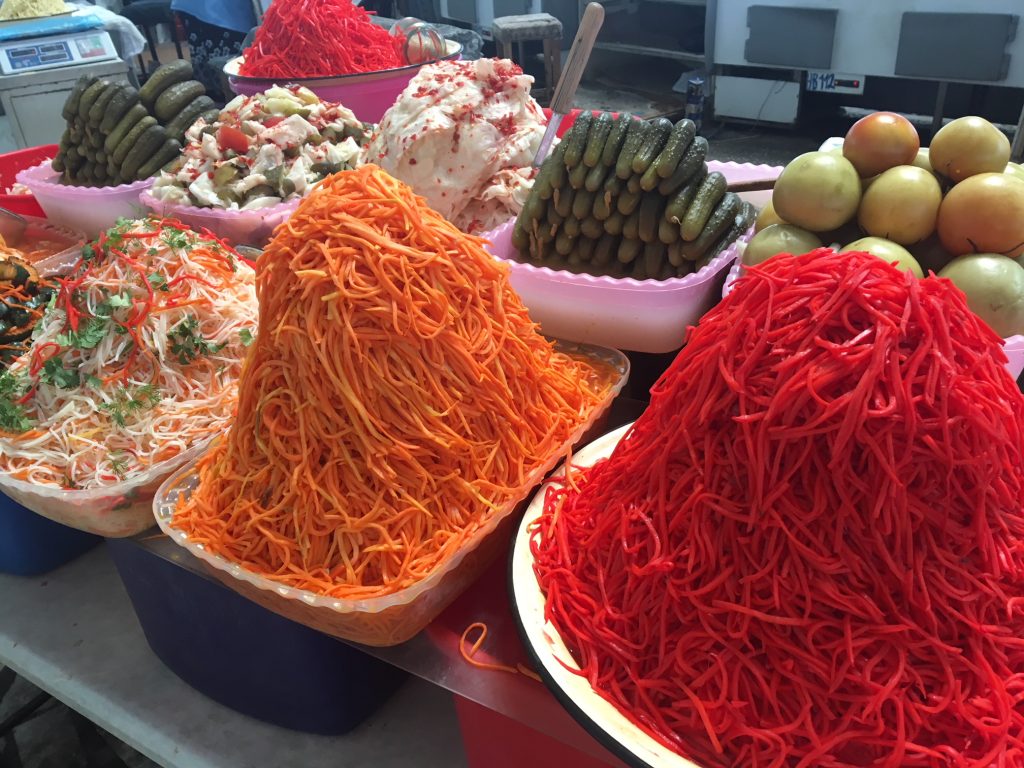 …and by large rounds of lamb tail fat (like lard), widely used in Uzbek cooking. 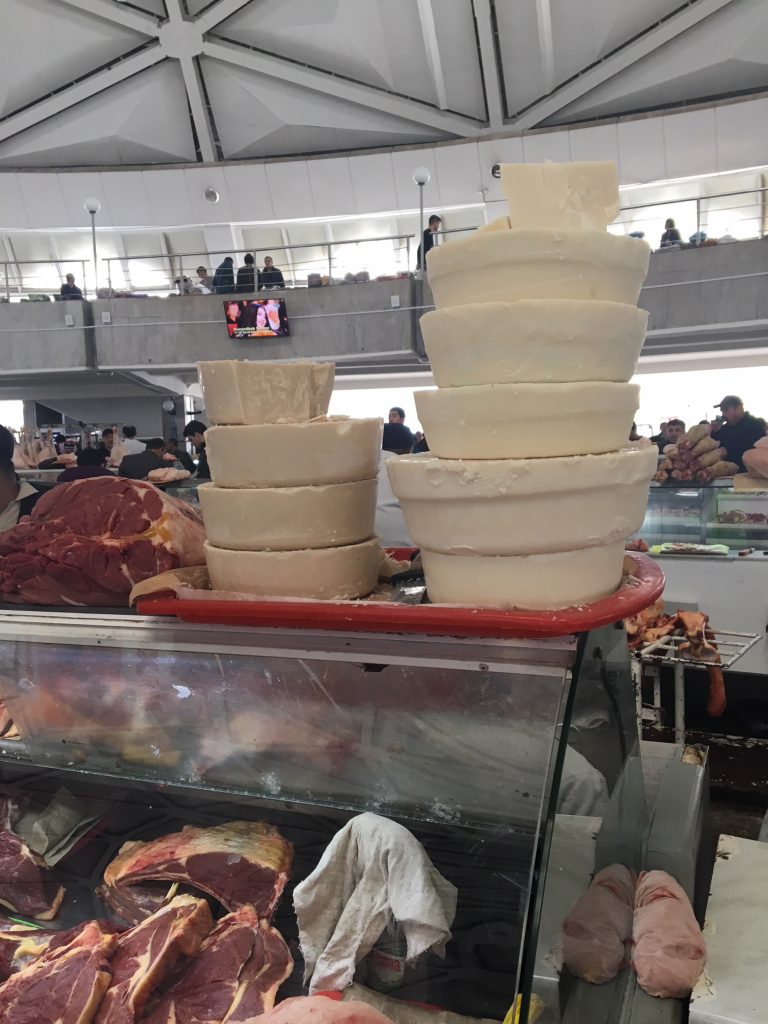 Rounds of lamb fat (from the tail of the lamb), used in “plov” and many Uzbek dishes – not good if you’re worried about cholesterol

We only spent a couple of hours at Chorsu, not enough time to see all there is at this enormous bazaar, but I found two excellent online tours of the market here and here. 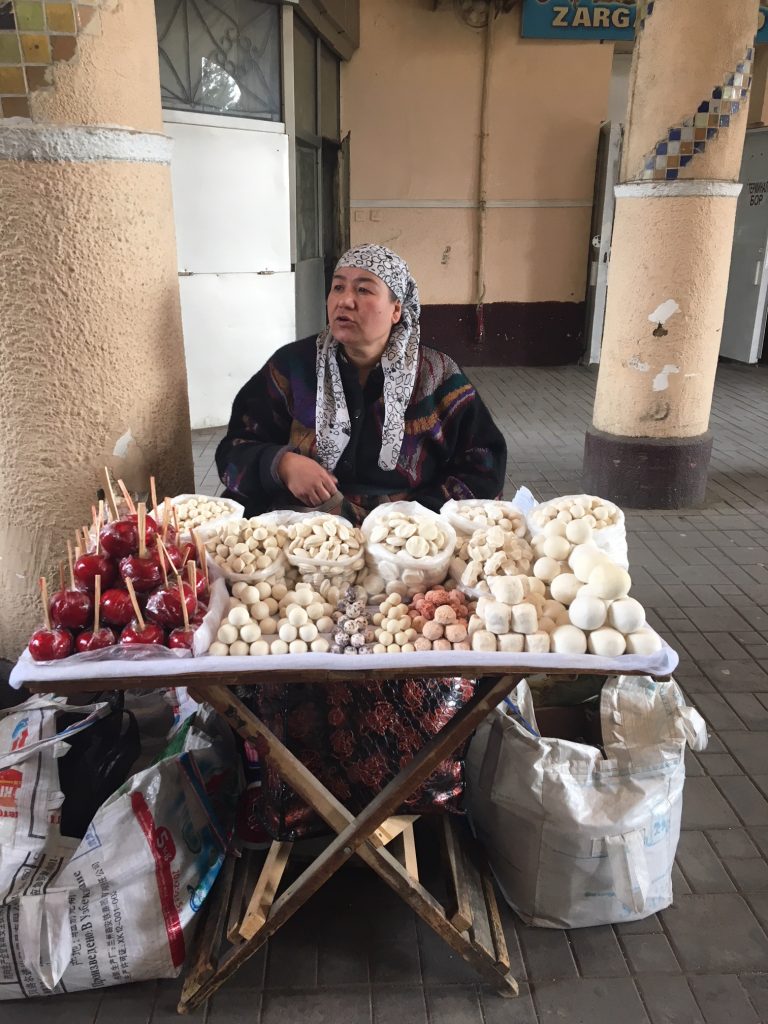 And I very much enjoyed the lively atmosphere and curious foods and contradictions  on show. I can’t say the offal stalls appealed to me, but I was amused by the Uzbek woman selling toffee apples and  kurt, a salty dried cheese made from fermented dried milk (some  joke it gets its saltiness from being rubbed under a person’s armpits), admittedly not to my taste.

4 Responses to Surprising Tashkent: the old and the new