I’d never seen such vivid green pistachios – brighter than the freshest green buds of Spring – that at first I thought I was hallucinating.
They’d been crushed and were being strewn over tissue thin sheets of pastry lightly brushed with oil followed by a sprinkling of sugar and dots of clotted cream. 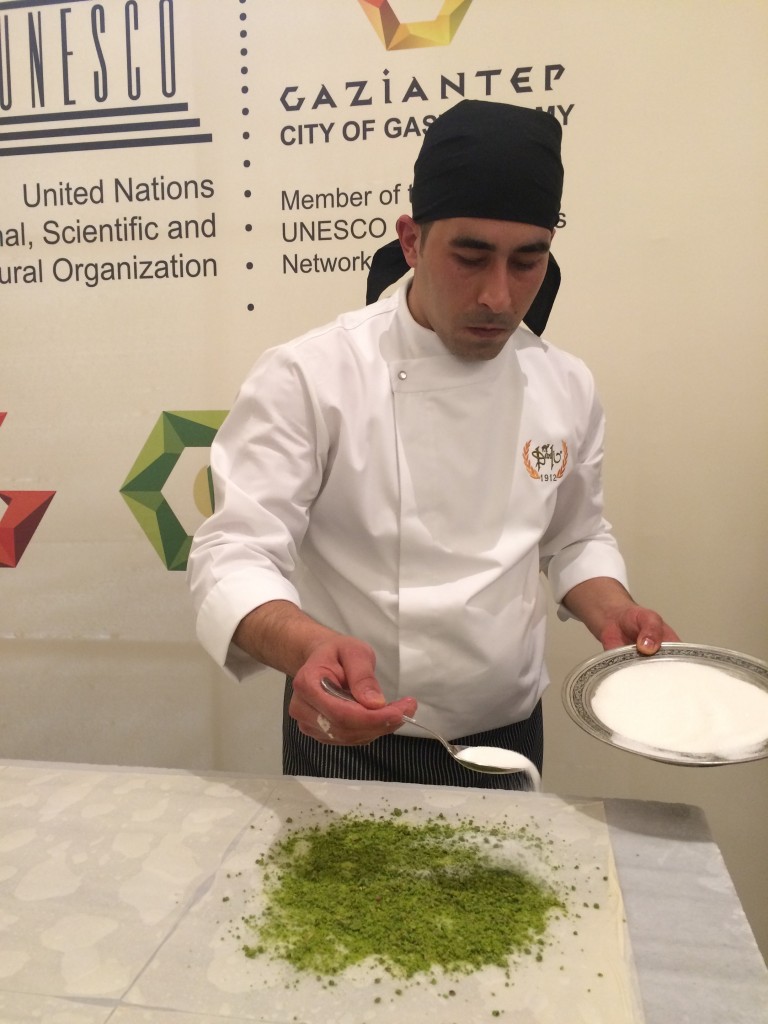 The pastry had been rolled out by a baklava master who had then stretched it by swirling it in the air a number of times, something which requires considerable practice and expertise. 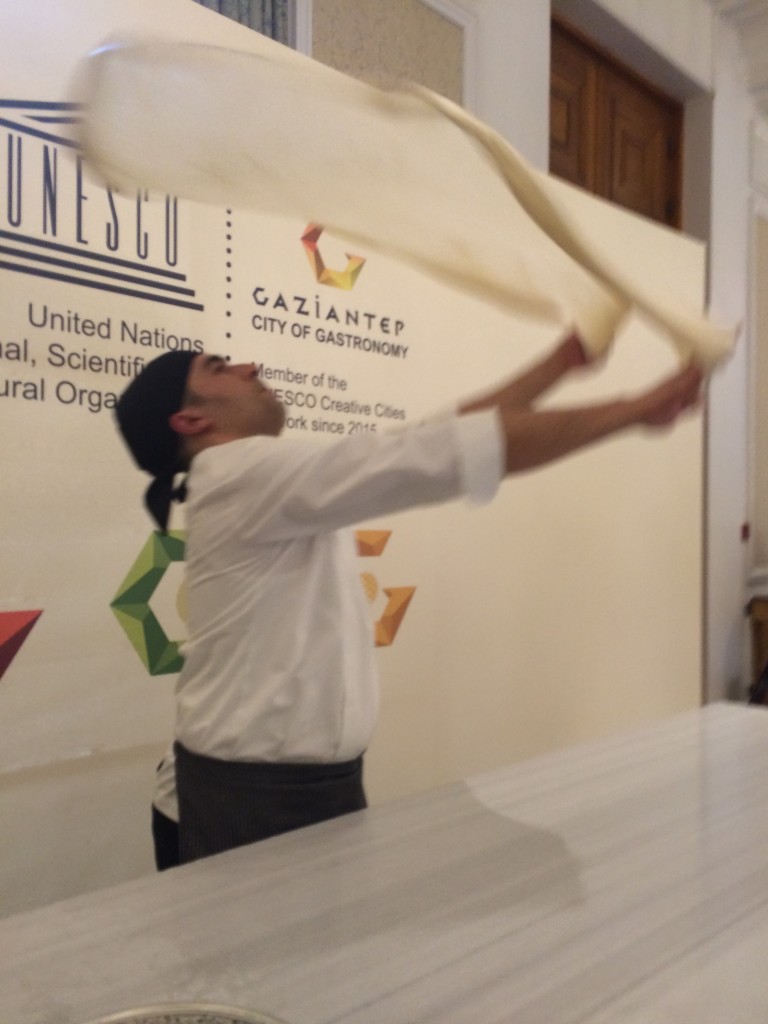 The baklava master swirling the pastry in the air

We were being shown how to make the famous katmer, the piece de resistance of the Gaziantep breakfast table.
It’s then cut into large squares, sprinkled with pistachios, sugar and clotted cream, folded into an envelope shape and either fried or baked in a hot oven until golden brown.
Having been invited to Istanbul to celebrate UNESCO’s selection of Gaziantep as a Creative City for Gastronomy, this cooking demo was my first introduction to Gaziantep’s legendary pistachio-filled pastries. 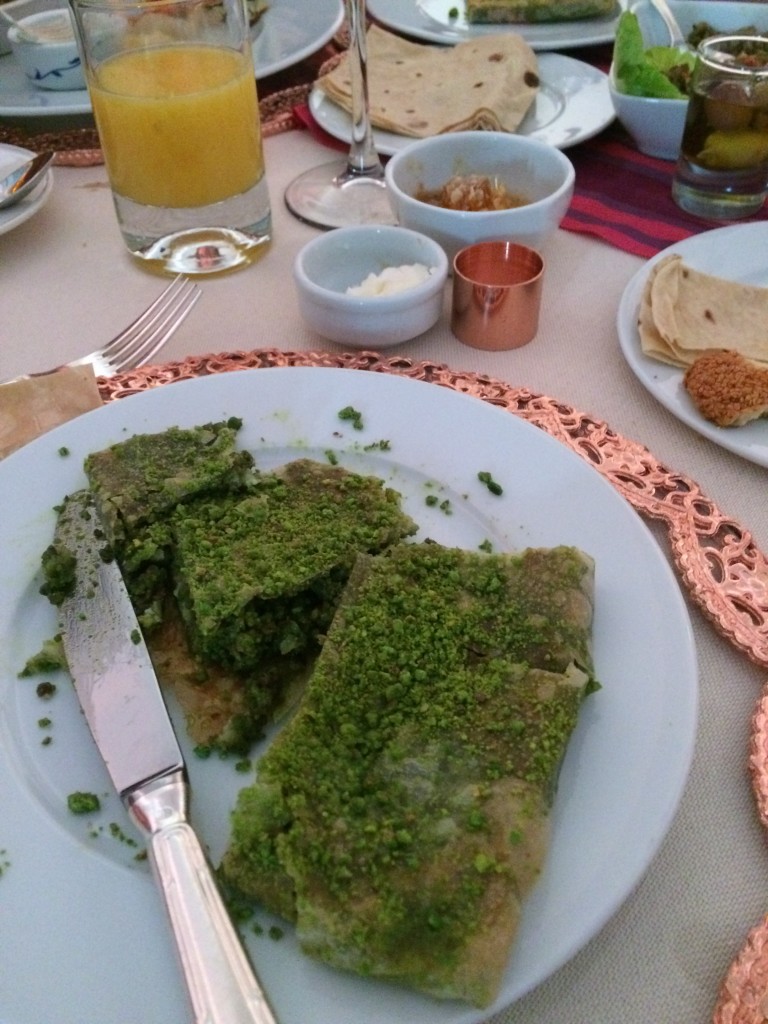 A plate of katmer at the breakfast table, Ciragan Palace

“The morning after a wedding in Gaziantep, it’s traditional for the groom’s family to send katmer to the bride’s family,” Filiz Hosukoglu, a food writer and researcher from Gaziantep told me.
“When I got married, my father-in-law went to the katmer shop and bought 60 pieces to distribute to all the members of the family to let them know his daughter was happy.”
Gaziantep is situated on the Syrian border of Turkey between Mesopotamia and a point close to the Mediterranean end of the Silk Road. Its cuisine represents a diverse heritage, a fusion of Anatolian, Mediterranean, Middle Eastern and Ottoman, and is acknowledged as the richest in Turkey. 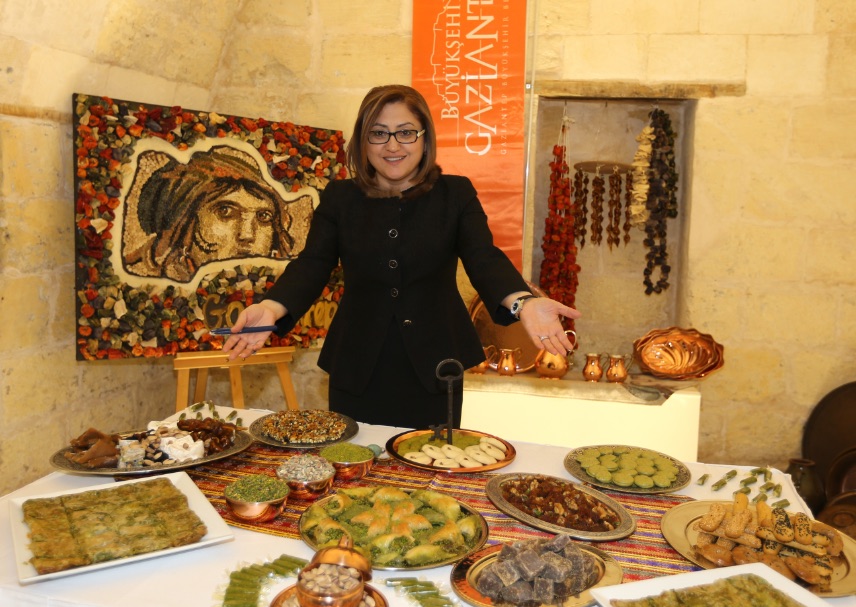 In the welcome speech by Fatma Sahin, the Mayor of Gaziantep, I learnt that Gaziantep’s cuisine developed over a period of 6,000 years and that it would take over a year and a half to sample all the local dishes if you tasted one per day.
“Gaziantep’s savoury dishes and desserts have become famous worldwide because they have been passed down from grandmother to grandchildren with all the care owing to a precious legacy,” she said.
“The fastidious selection of ingredients and the skills used in their preparation and cooking, plus the spices, condiments and sauces which lend distinctive flavours have also contributed to its privileged position among the regional cuisines of Turkey and of the world.” 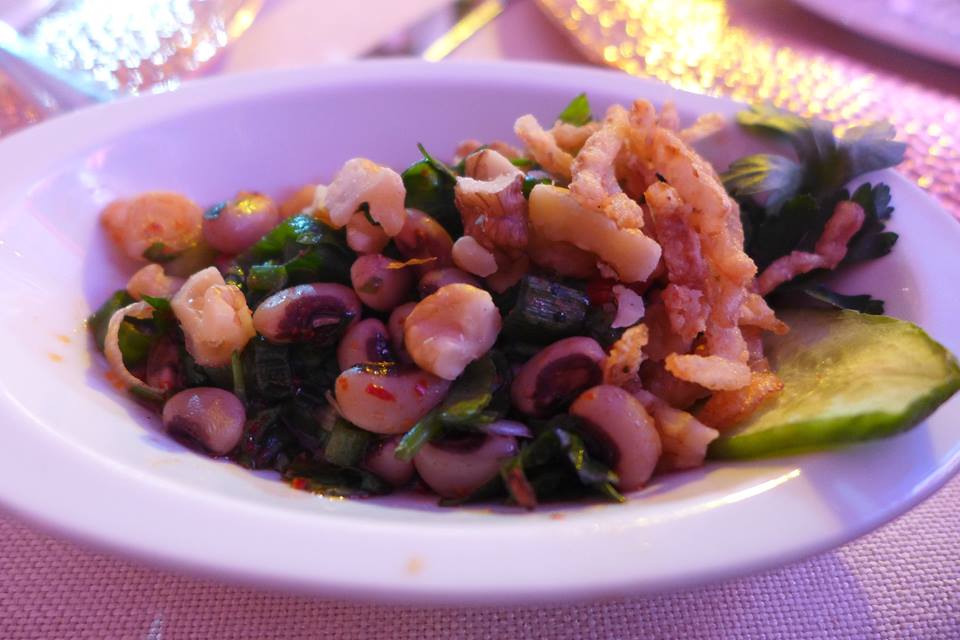 I was surprised and delighted by the range of dishes we tasted at both the welcome breakfast and the celebratory dinner at the palace and intend to start including them in my repertoire of dishes at home.
One of these is the black-eyed pea salad (loglaz piyazi) with walnuts, green onions, red chilli flakes, parsley, lemon juice and olive oil 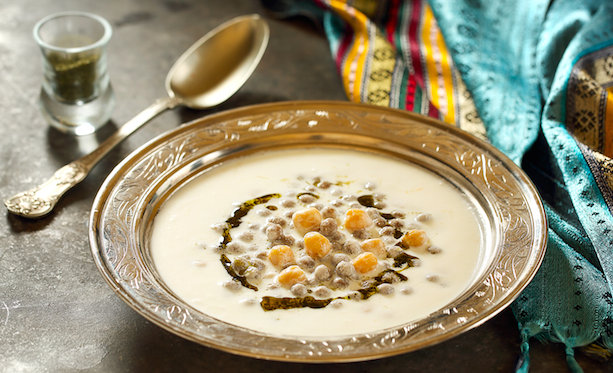 Yuvarlama: Gaziantep’s favourite dish which is served at the end of Ramadan in every home

Another is yuvarlama, a tasty, wholesome yoghurt soup made with lamb, chickpeas, strained yoghurt thickened with egg, olive oil, dried mint & butter.
I also liked the appetiser of lettuce leaves filled with mung beans, green onions, parsley, lemon juice and chilli flakes (mas piyazi); and another one of tiny mince meat & bulgur balls which are poached then sautéed in butter with red chilli flakes and served over strained yoghurt mixed with garlic and parsley (arap koftesi). 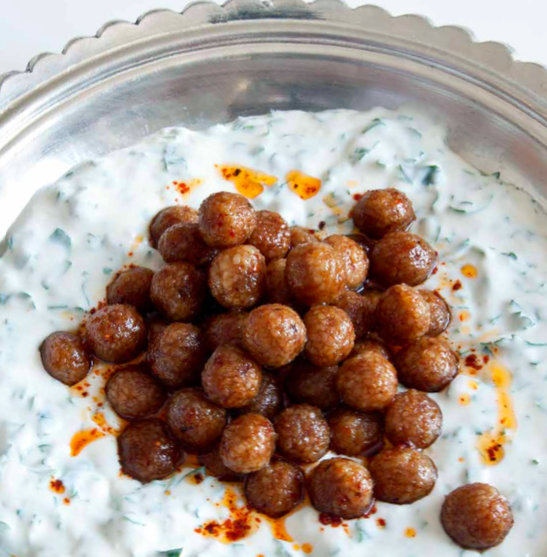 As Aylin Oney Tan points out in her fabulous, informative book A Taste of Sun & Fire: Gaziantep Cookery:
“One aspect of Gaziantep’s culinary diversity is the use of many different cooking methods. The kebabs for which this cuisine is celebrated are just the beginning of a whole range of stewed, fried, and steamed dishes.  Pilafs can be full-scale feasts  while the countless yoghurt-based stews and soups are a culinary category all their own, unmatched anywhere else.” 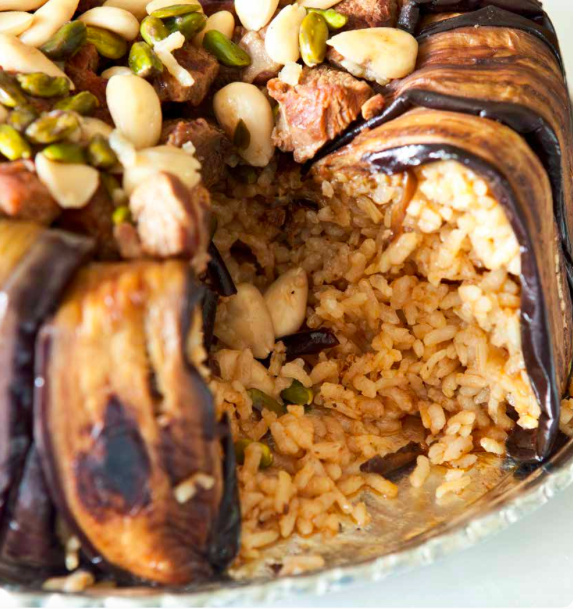 Dried vegetables such as red capsicums, eggplants, snake cucumbers, or and bottle gourds are used extensively. They hang on strings in bunches and make a colourful display in Gaziantep’s Elmaci Bazaar every September.  Drying intensifies their flavour and also gives them a distinctive texture. 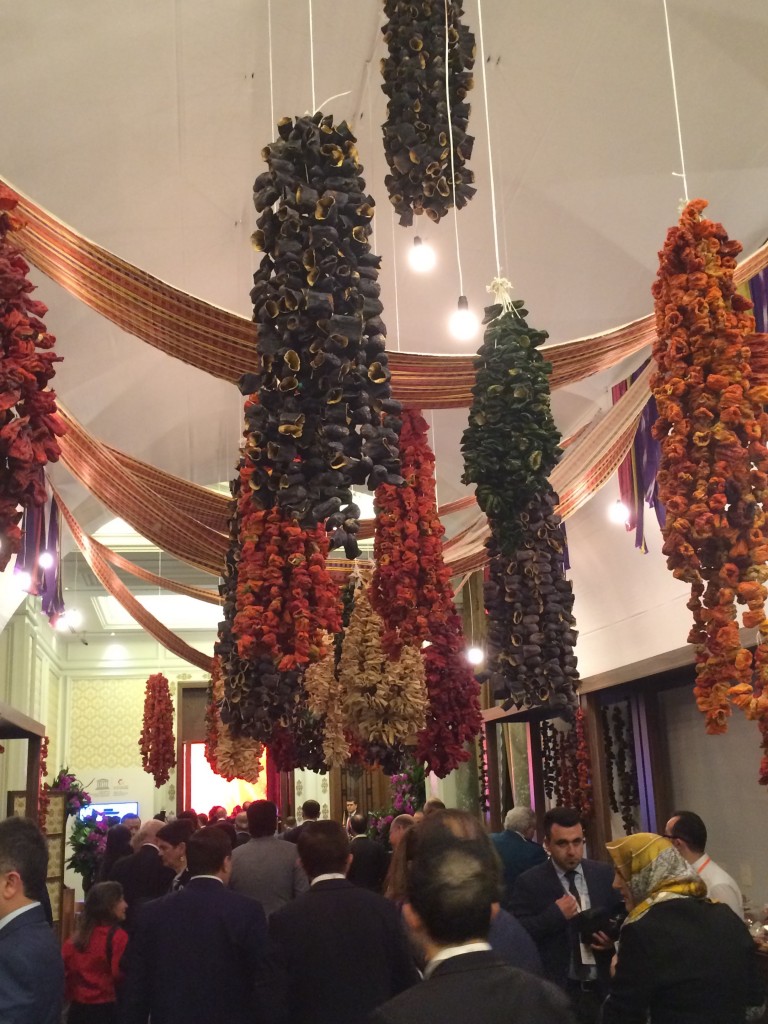 They are reconstituted with water before being stuffed with a variety of fillings which might include rice, onions sauteed in olive oil, garlic, tomato paste, red chilli flakes and dried mint as in Zeytinyaglu Dolma (dolma means ‘filled’ or ‘stuffed’ in Turkish, whilst those rolled in leaves such as Swiss chard or vine leaves are called sarma which means ‘wrapped’). 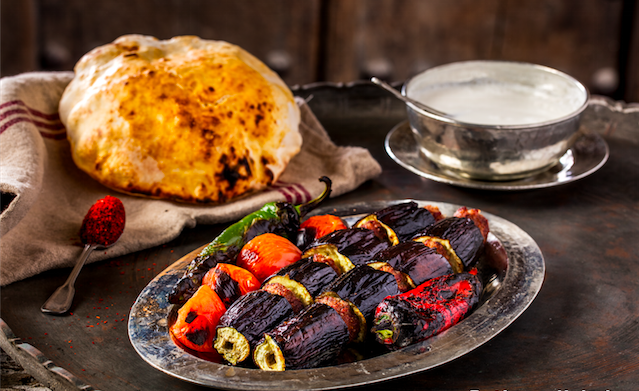 And while Gaziantep is virtually synonymous with baklava, it is just one of myriad delicious desserts which include milk puddings, syrupy pastries, helvas and sweetmeats. Many of the home-made desserts are sweetened with grape molasses instead of sugar, a thick, amber-coloured syrup withe a rich flavour. Many different varieties of helva are made with tahini (sesame paste), laced with sesame seeds, pistachio nuts, roast chickpeas or hemp seeds. 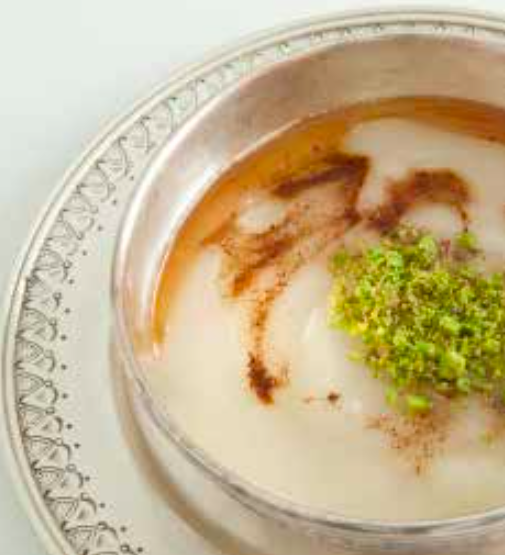 I would love one day to visit Gaziantep and see and taste all these wonders first hand. In the meantime, we can all only hope that the Syrian crisis ends soon and that peace returns to this rich, fertile and ancient region.

4 Responses to The Ancient Cuisine of Gaziantep