It’s been a long hot summer Down Under. In fact it’s been the hottest month of January ever recorded.
One night, a couple of weeks ago, was the warmest January night in Sydney ever (records for the city go back to 1858).
And right in the middle of the month one of my grand-daughters turned one. Her parents planned to hold an afternoon tea in her honour and asked if I could make the birthday cake. 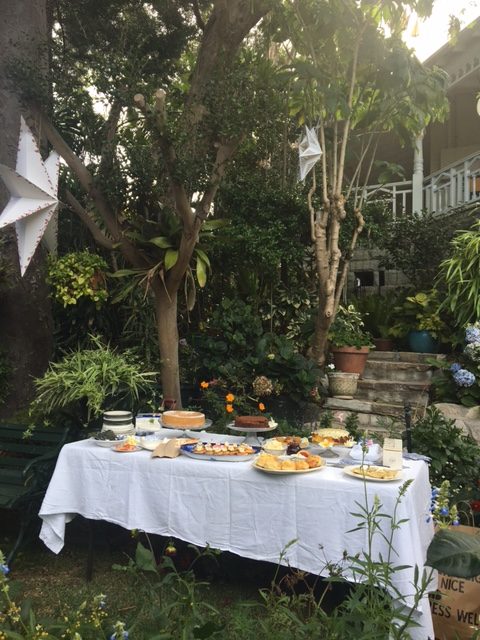 The very thought of baking a cake in that heat caused me to break out in beads of perspiration.
A magazine (Real Food Kids ) with a watermelon cake on the cover caught my eye.
It was covered with coconut frosting, studded with pomegranate seeds and topped with fresh raspberries and rockmelon “stars”.
Watermelons were selling for $1/1Kg that week at my local greengrocer so I decided to give it a go. 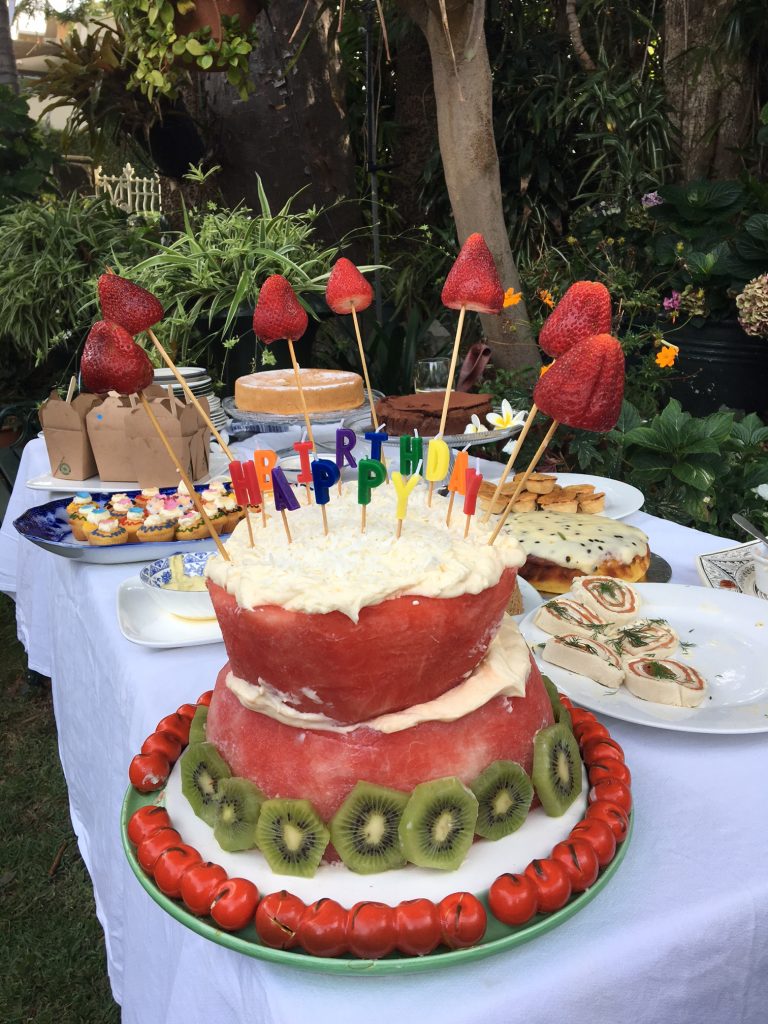 The only problem was that the recipe (2 cups coconut paste beaten with 2 cups coconut oil and some maple syrup) for the icing didn’t work (had it been tested by the author Jess Lomas?) and I ended up in a lather anyway.
After checking out a few sites on the web, I found another recipe for the coconut frosting which works perfectly and is easy to make.
Best of all, my little grand-daughter loved it.  She sucked on the wedges of chilled watermelon and smudged coconut frosting all over her face.
You’ll find the recipe here and some step-by-step photos below:

I found this beautiful sweet melon at my greengrocer, already cut in half. It weighed almost 4Kg. 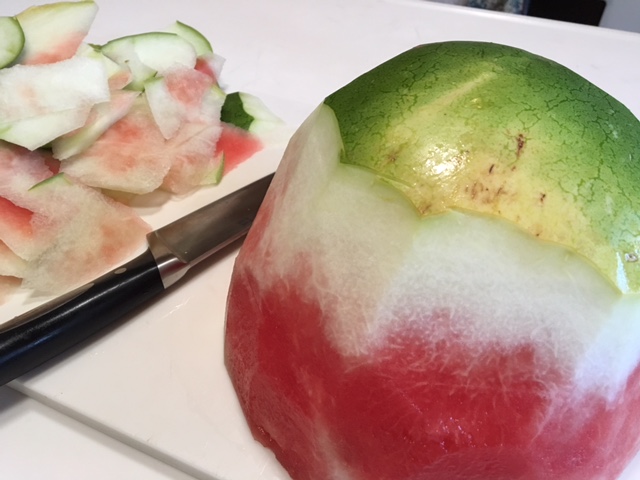 Place the melon, flat side down, on a board and begin by cutting off the rind and white outer flesh around the sides. Try to keep cutting around it so that the shape resembles a cake. 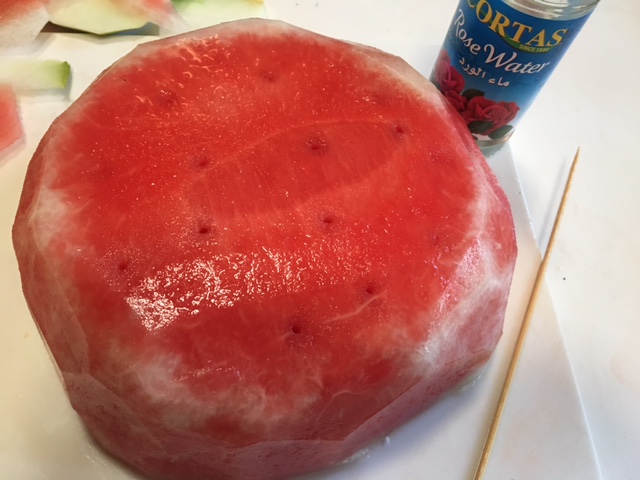 When all the rind has been removed, level off the top so that it is flat.  Prick the melon all over with a bamboo skewer, pushing the skewer as far in as it will go. Sprinkle with 2-3 tablespoons rosewater – use a spoon to push any excess into the holes. 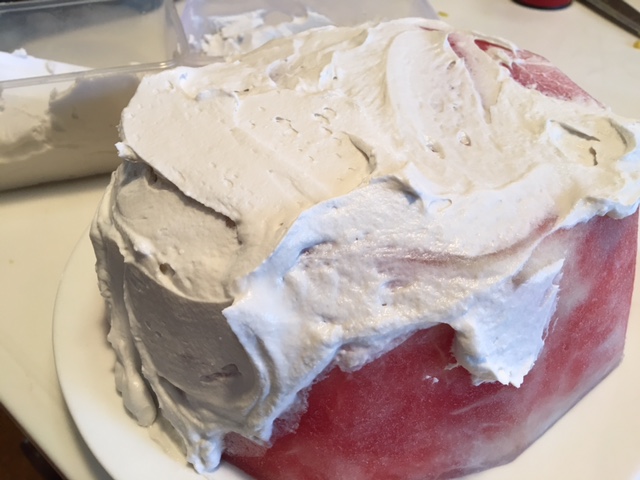 Pat the melon dry all over with paper towels (or leave it in the fridge for a few hours or overnight to dry out). Spread the coconut frosting generously over top and sides of the cake. 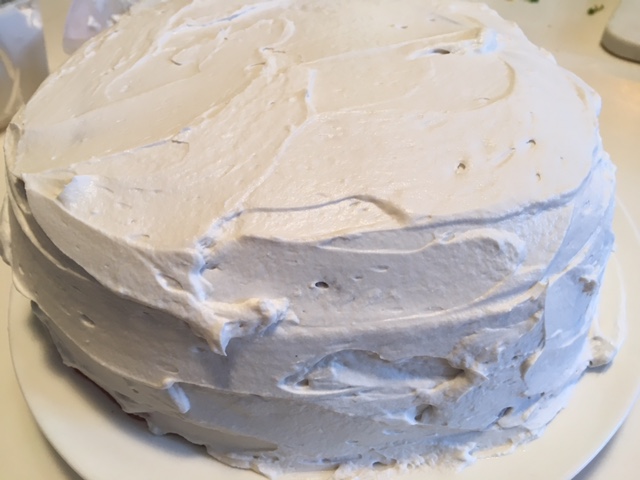 Now all you need to do is press the toasted flaked almonds around the sides and decorate the top with summer fruits. 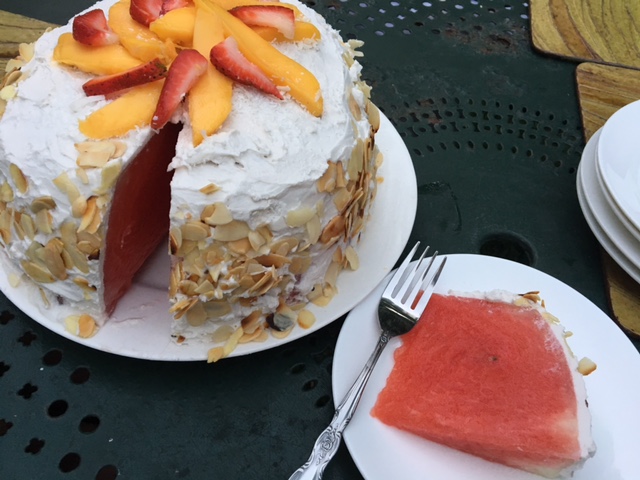 2 Responses to The Best Summer Birthday Cake Ever