The sun is high in the sky by the time I arrive in Glenning Valley, a good hour’s drive north of Sydney near Tuggerah Lake on the Central Coast.
I’ve come to visit cookbook author Loukie Werle and her husband Philip Gore to talk to them about their impressive self-published cookbook, The Valley. 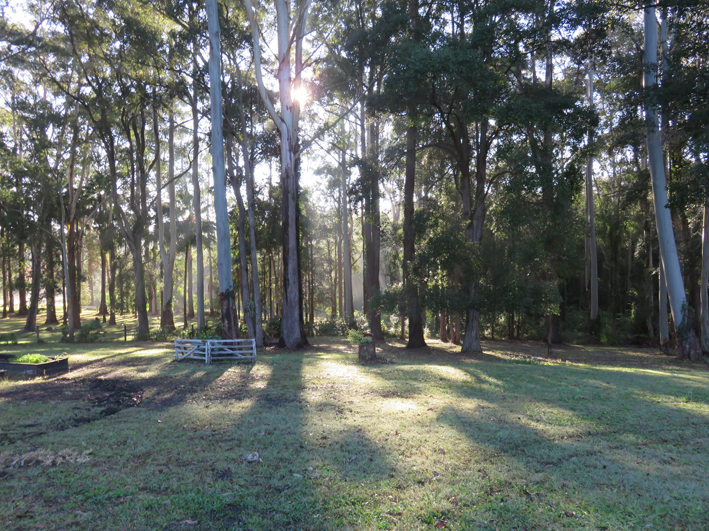 A majestic stand of eucalyptus trees, their leaves rustling in the warm breeze, greets me at the bottom of the hill. The driveway veers to the right and there before me is their splendid new home encircled by a wide verandah with vine-covered trellis and studded with pots of brightly coloured geraniums. 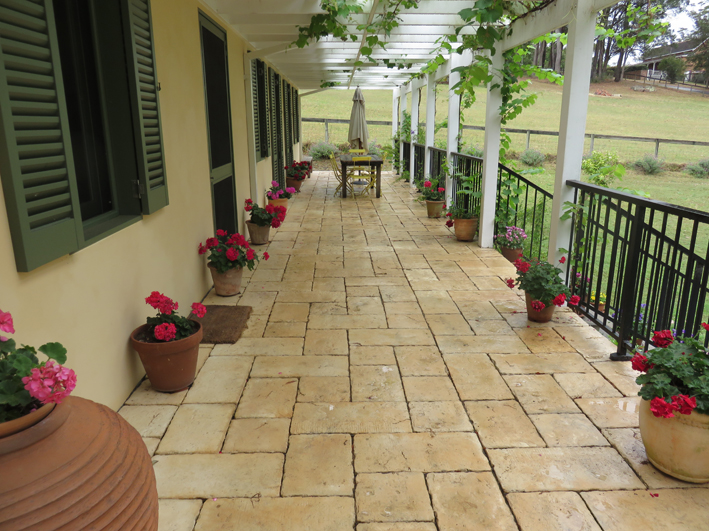 The wide terrace, studded with pots of geraniums, around the house

Loukie is well-known for her columns in Cosmopolitan, House & Garden and Good Health and for her award-winning cookbooks while Philip has had extensive experience as a a director of Media 21 Publishing.
“A few years ago Philip and I decided to leave Sydney and start a new life in the country,” says Loukie. “A big drawcard was that my daughter, Sascha, with her husband and four beautiful children already lived out of the city, in a beautiful area only an hour or so away. So that’s where we began looking.” 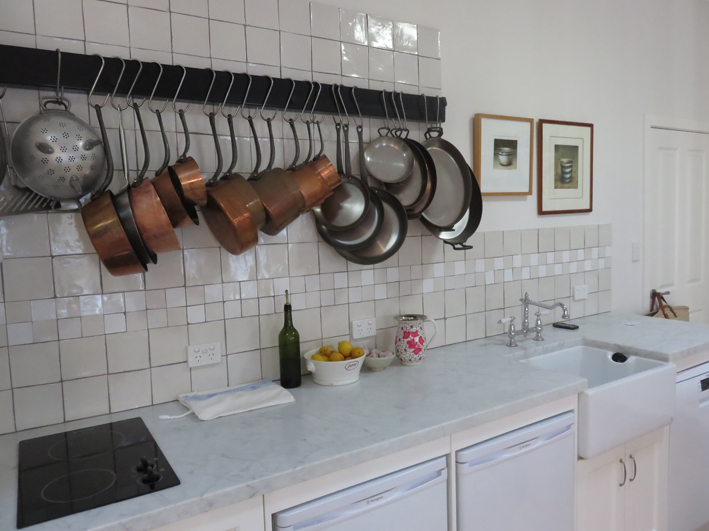 Loukie wanted the new house to have all the features they’d ever wanted: tall windows, timber shutters, wide terraces, high ceilings, a large kitchen with adjoining pantry and separate offices.
They engaged a local builder who was prepared to follow their plans.
“The building experience was not without its pitfalls and frustrations,” says Loukie, “but finally our house was finished and it has turned out exactly the way we wanted it.”
They’ve been living there for over three years now, during which time they’ve produced and published The Valley.
“Making it was an eye-opener,” says Loukie. “Being used to working with the best photographers, stylists, and home economists, I now did all my own styling and pictures, as well as writing and cooking the recipes. 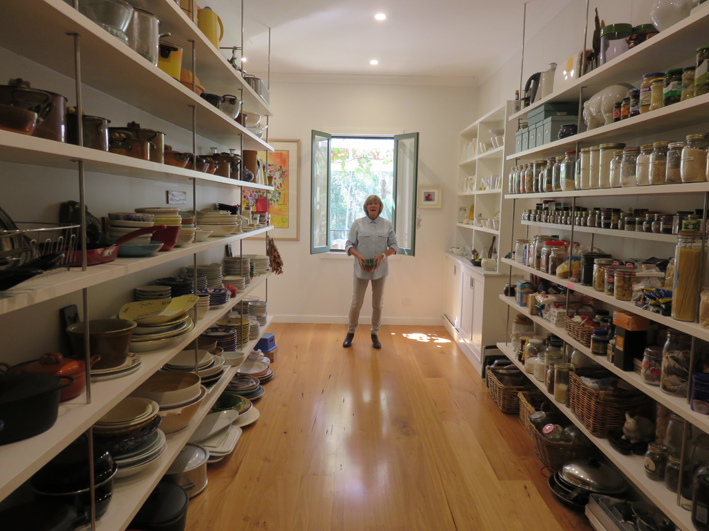 “My husband used his publishing experience to actually make the book, choose fonts, do layouts, deal with the printer and so on. It has given me a totally new appreciation of the work that’s involved.”
Good self-published books are few and far between and it’s clear from the moment you pick this one up that Loukie and Philip knew what they were doing. It’s a pleasure to hold, with good quality paper, and is well laid-out and easy to read. The photos throughout, taken by Loukie, reveal her extensive collection of old plates, platters, tablecloths and teatowels, lovingly collected over the years.
For many years, Loukie ran cooking classes from her home in the city and were an important part of her Sydney life.
“They ended, but not my love of food” she says. “So when I started writing a new cookbook, I really wanted it to have recipes that reflect the way we live here, with doors wide open for family and friends.” Loukie’s generosity and common-sense approach are reflected throughout in the recipes she has chosen.I very much enjoyed her gravlax which she served for lunch  with a large green salad on the day I visited. It was followed by a semifreddo, a perfect finale to our delicious light lunch. 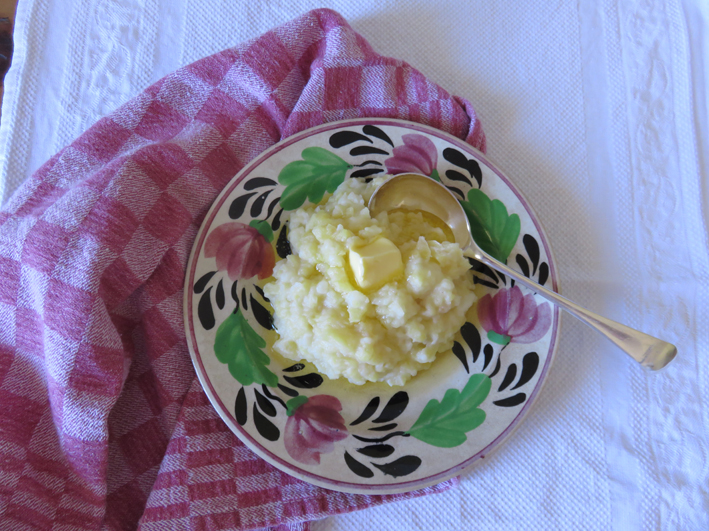 Other recipes to look out for include her potato and apple puree, a dish her Dutch mother used to make,
“The best treat was a lump of unsalted butter, buried in the centre of the steaming bowl, only the top visible as it slowly formed runnels down the sides, pooling on the bottom of the plate, melting into this ultra-comforting mixture. Good with any kind of pork.”
Her cumin lamb salad with asparagus, beetroot and minted yoghurt is a lovely mix of flavours, colours and textures, and I’ll definitely be making the chocolate souffle cake and also her red onion marmalade, a jar of which she has in her fridge at all times to accompany cold meats or to add to a toasted cheese sandwich. 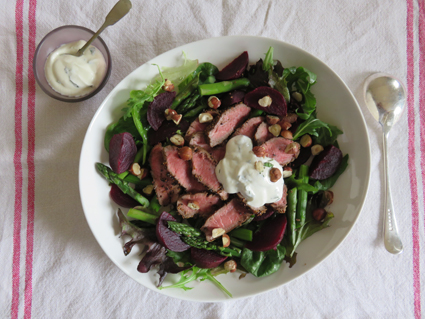 Four pages at the back are dedicated to “practical matters”.  Practicality is something the Dutch-born Loukie has in spades and I appreciated her tips on dealing with raw red onions, tasting spoons and her advice on looking out for a jam funnel.
“Transferring hot marmalade to glass jars can make an awful mess,” she says.”Try to find a speck jam funnel.  This has a wide opening, which fits into the tops of most jars easily and even the chunkiest jam and marmalade glide through without a hitch.” 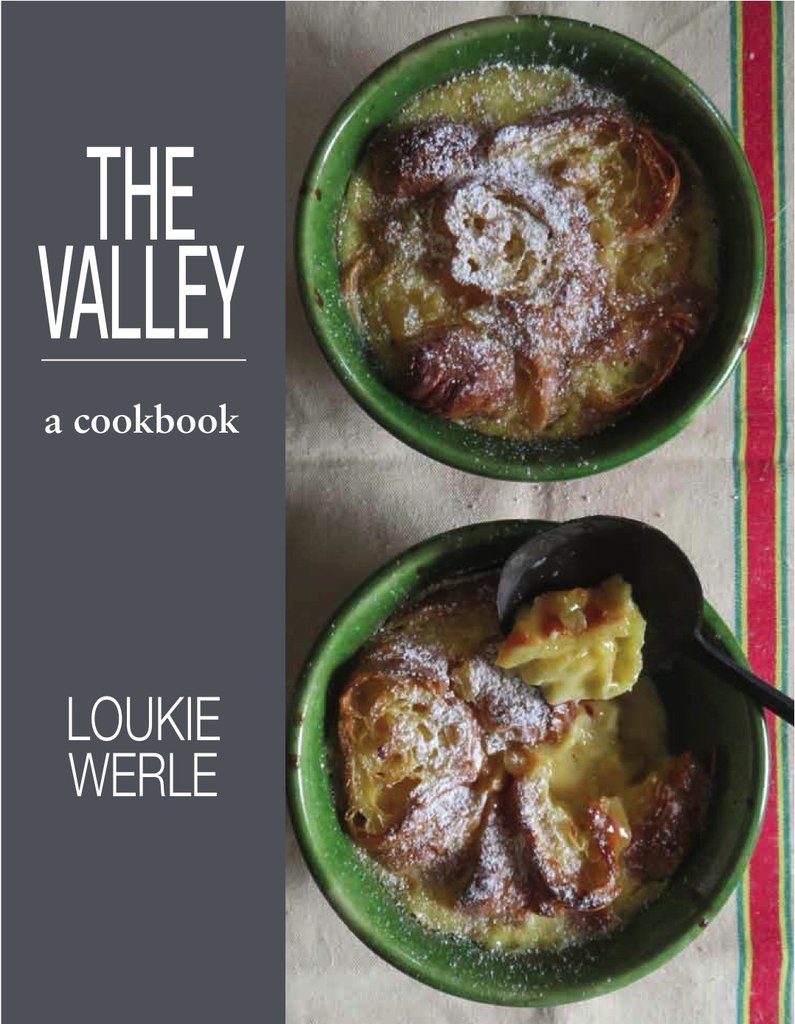 I’m a great admirer of people who take the plunge and self-publish (Sydney-based cookbook authors Jules Francois, self-published Notes e Nostalgies last year and Carol SelvaRajah self-published Dining with Dragons a couple of years ago) as it requires not just the concept, writing, testing and photographing of recipes, but also design of the cover and interior, format, price, distribution, marketing and public relations.
Recently I was surprised to discover that the American author of The Joy of Cooking, one of my most treasured cookbooks, paid a local printing company in 1931 to print 3000 copies. The Bobbs-Merill Company later acquired the rights and it has now sold over 18 million copies.
I bet Loukie and Philip would be over the moon if they sold even 1% of that amount.