Summer and wedges of chilled watermelon go hand in hand. With its crisp texture, sweet flavour and watery consistency, it’s one of the great thirst-quenchers on a steaming hot day. 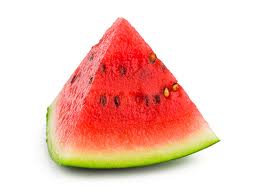 Melons are members of the ‘Cucurbitaceae’ family and as such are usually classed as vegetables along with other cucurbits like cucumbers, squash and pumpkins. It’s a confusing classification as most of us think of melons as fruits, but so be it. Melons seem to have originated in tropical Africa, though some claim it was Italy and others cite the Middle East.  Watermelon leaves and seeds have been found in New Kingdom tombs in Egypt and pictures of a fruit which some have identified as melons are depicted in Egyptian paintings dated around 2400BC. In the 1850’s, the explorer David Livingstone found “great tracts of water-melon growing wild in the Kalahari desert”.  You can imagine the sight – luscious, thirst-quenching watermelons in the desert – but it was no mirage.  Mother Nature had provided well! In Australia around about the same time, the chief vegetable was the pumpkin and the chief fruit was the watermelon, “the size, the colour, and delicious refreshing coolness of which, eaten during the three hours of mid-day heat when most farming people pause for a time from their field labour, it would be impossible for me to describe by mere words.”  Such were Alexander Harris’ impressions when he came to Australia (Harris subsequently wrote a book entitled ‘Settlers and Convicts: Or, Reflections of Sixteen Years in the Australian Backwoods’).

The approved method of eating these melons in those days was to cut a hole, pour in a bottle of Madeira or sherry and mix it into a cold pulp, reminiscent of the British custom of pouring port into a wheel of Stilton. Watermelons are the fruit of the annual vine ‘Citrullus vulgaris‘ which has two very different varieties – ‘C.v. amarus‘ which is known as the bitter apple of South Africa and the sweet watermelon which is var. ‘caffer’. From this second have developed many cultivars. Modern cultivars can be roughly divided into groups according to their characteristics. The fruit may be round, oval or cylindrical, depending on the variety, and weigh from 3 to 25 kg. The colour of the skin may vary from white through shades of green and may be mottled or striped. Flesh colour varies from yellow through to red. Red-fleshed varieties are the most popular. One of the most popular varieties is  Warpaint which is medium large, round to slightly elongated and distinctly striped with dark green on a bright green base.  It weighs 11kg – 13 kg. It usually matures ten days earlier than other varieties. Newer and smaller varieties grown in Australia include the champagne melon (yellow flesh), Allsweet, Mirage and Fummy Quite a few of the new F1 hybrids have few or no seeds, though these may not be popular in regions where watermelon seeds (which are both oily and nutritious) are eaten and enjoyed. Interestingly, seedless watermelons are sweeter in flavour, more vibrant in colour and crunchier in texture. They are grown in 90 countries in every continent in the world.

Seedless Watermelons can only be pollinated by crossing with pollen form a regular seeded melon.  To accomplish this, growers plant seeded and seedless plants next to ane another and, with the help of pollen carrying bees, they pollinate seedless plants to produce “seedless” melons. Watermelons love a hot climate and can adapt to a variety of soils provided they are fertile and well-drained. When planting melon seeds, the soil temperature should be over 20degC and sowing depth not more that 1cm – 2cm.  Well-manured soil and ample water are necessary, and it is essential to water the roots and not the leaves – to prevent mildew. Unlike cantaloupe melons, watermelons will not cross-pollinate. They are ready to harvest when their surface skin is tough and hard to puncture with a fingernail, and the bottom of the melon has turned yellow. Today China is the largest producer of watermelons in the world followed by Turkey, Iran, the United States and Egypt. They are grown commercially in all states of Australia except Tasmania. Chinchilla Watermelon Festival: www.melonfest.com.au